I went to Virginia last weekend for a school function. On the way home, I finally succumbed to temptation and stopped in New Market, at the New Market Battlefield. The battlefield is preserved, right next to I-81, with E-Z on and off, so you can commune with history and still make it to Aunt Edna's house in time for some apple pandowdy hot from the oven. The battlefield also includes a museum built in sort of Roger Moore as James Bond modernist style. 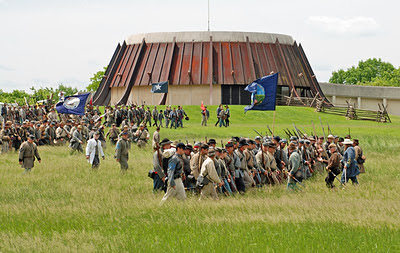 The Battle of New Market, which occurred on May 15, 1864,  is noteworthy because the Cadet Corps of the Virginia Military Institute marched 81 miles in four days from their barracks in Lexington to New Market, where they saved the day for the Confederacy, driving the Union forces from the field. No matter how you slice it, that's quite an accomplishment for a bunch of college kids.

Because the battlefield is owned by the Virginia Military Institute, this rack card appears prominently next to those touting Virginia's Natural Bridge and Luray Caverns.

Yes equestrian fans, this is indeed Little Sorrel, General Thomas "Stonewall" Jackson's stuffed horse, telling you to saddle up and mosey on down to the Virginia Military Institute. I've seen Little Sorrel in person but that was a LONG time ago, and I thought by this time he might have been put out to pasture or at the very least sold to a Pennsylvania Dutch Smorgasbord that advertizes Seven Sweets, Seven Sours, and One Taxidermied Civil War Horse.

Little Sorrel was looking a little long (and dead) in the tooth when I saw him in VMI's museum. For all of you keeping score at home, this was shortly after Lee's surrender at Appomattox. However, according to the Virginia Military Institute, Little Sorrel had a spa day in 2007 with "conservators who specialize in 19th century mounted animal hides."

So apparently Little Sorrel got a shampoo, dye, and extensions. No joke. He's sounding a lot like Lil' Kim to me.

L. S. was Jackson's horse thoughout the Civil War and Jackson was riding his trusty steed at the Battle of Chancellorsville, where, as we all know, the General was killed in what the Pentagon would call a "friendly fire incident".

After the war, the L.S. lived the life of a 19th century reality star, and appeared at county fairs, rode in convertibles in college homecoming parades, opened shopping malls, and dictated his memoirs by stamping his hoof on the ground. According to Confederate mares, the Little in Little Sorrel referred to his size and not, you know, to his size, if you follow me. He finished his days at the Old Soldiers' Home in Richmond.

According to VMI's press release, L.S., as we see him today, is the creation of  Fredrick Weber, the leading taxidermist of his day. He's not your standard sawdust and wood model, but is actually plaster, which is much better suited to the creating the shapely gams of a Confederate war horse. VMI also points out that Little Sorrel is "the oldest mounted horse in America and one of only about six historically significant mounted horses in the world."  Not exactly six, but about six. And no, they don't offer up the identity of the other about five.
Posted by Rick Bryant at 9:54 PM