I’ve done lots of interesting things in my life. I’ve put a Whoopee cushion under my unsuspecting mother in one of State College’s nicest restaurants; I’ve fallen into a canal in Venice (yes, that Venice); and I’ve been run over by a tow truck.  But until the other day I’d never been to the Pennsylvania Farm Show. Oh I’ve driven by the Farm Show Complex (it’s not just a building, it’d definitely a complex) on my way to meetings lots of times, and have even been inside for a car show, but that’s as close as I’ve come. Until now. 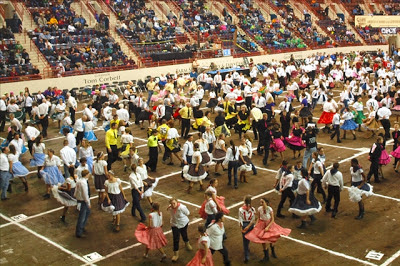 Before I get too far, I should explain that Pennsylvania, unlike its neighbors, doesn’t have a state fair. New Jersey has a state fair, so do New York and Ohio and West (by God) Virginia and Maryland. Even Delaware, the second smallest state, has a state fair. Pennsylvania, for reasons unknown to me, has a farm show, and it takes place in Harrisburg in early January.

As a student in the RULE (Pennsylvania Rural Urban Leadership) program I had the chance to go to the Farm Show to work in a food booth run by the Pennsylvania Livestock Association. So faster than I’d get thrown from a bucking bronco in a gay rodeo even if I were wearing my manly and now even vintage Tony Lama cowboy boots, I said yes. I thought it would be a great way to see the Farm Show and relive my junior high years when, along with other members of the social leper caste, I served Hawaiian Punch at junior high dances while the cool kids made out in the all-purpose room’s bleachers under the watchful eyes of chaperones who were probably packing flasks of whiskey sours.

In case you were wondering, the mission of the Pennsylvania Livestock Association is to develop and conserve the full agricultural and soil resources of Pennsylvania by promoting the production and maximum usage of cattle, sheep, swine, and horse industries within the Commonwealth. Nothing exotic, mind you. No Andean triple play (llama, alpaca, vicuna); no bison, deer, or even heritage jackalope.  Venison tartare was not going to be on the menu.

Since I'd never been there before, I made sure to get to the Farm Show in time to do a little exploring before my turn slinging burgers. 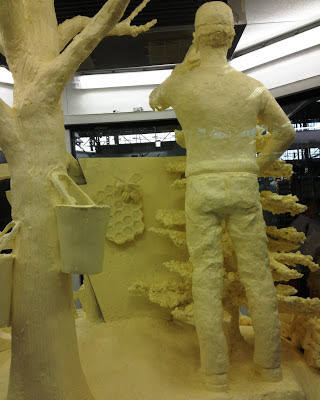 One of the highlight of the Farm Show, at least for the producers of 6:00 p.m. news broadcasts in the Commonwealth of Pennsylvania, is the butter sculpture.  Year after year fair organizers engage a sculptor to coax hundreds of pounds of Land O’ Lakes into some magical creation.  This year the butter was formed into a vision of a recumbent Paula Deen as an odialisque in the harem of Omar Khayyam. No, actually it wasn’t that, it was something along the lines of a tableaux vivant of a farmer with various agricultural products, rendered in a variety of different scales, just like the train set I had when I was a kid, where the engine dwarfed the Lionel City station and the little buildings of Plasticville. The sculpture was pretty cool, but I was a tad disappointed to learn that it isn’t solid butter, it’s an inch and a half of butter over some sort of frame. In art history speak, it’s not cast by the lost wax method, or even hammered as in repoussé and chasing, but created by a method known as “frosting”.

The sculptor, Jim Victor, seems to straddle that stalk of celery that separates the visionary artist from nut job (so to speak).  He has a killer web site with great photos of more than a few choice food sculptures that make up his portfolio. While there is something charming about an NFL player rendered in food items you can buy at Subway, or Andy Warhol’s Marilyn in marshmallows,  my favorite was Salute to the Lunch Lady, sculpted in butter for the 2012 New York State Fair. Surely if anyone deserves a MacArthur Foundation Genius Grant it’s a guy who can create a bust of Fidel Castro from vegetables. 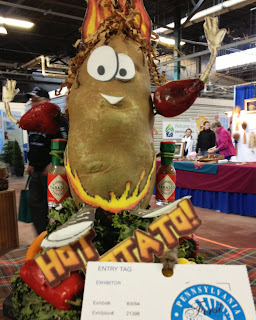 After the butter sculpture, there was a mushroom sculpture and a spud sculpture.  They get little play from the newscasters, but this year, at least, were more successful as works of art. 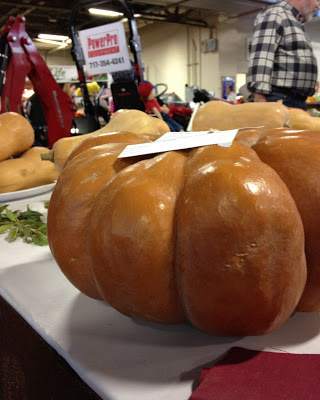 Once you tire of ogling vegetables (and believe you me, there were some beauties in the varnished gourds category) there are commercial booths to take in, just like at a state or county fair. 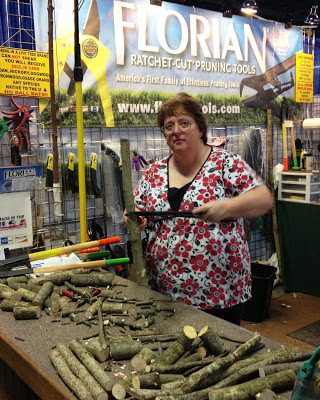 This woman was selling some sort of ratcheting pruner. If I didn’t know better, I’d say she was the model for the Lunch Lady in the New York State Fair’s butter sculpture. She was working through those logs like a hot knife through, well, butter, but still had time to pose for a photo. I wanted to ask if she saw Lorena Bobbitt as a role model, but there were some actual customers there monopolizing her time.

If you already have enough ratcheting pruners you can buy boots and license plate surrounds and pots and pans sold by guys wearing headsets like Madonna on one of her concert tours. If the pot-shilling booth babes would wear rocket nosecone bras as Madonna did when she was young enough to wear Revere Ware, I might actually buy their patented non-stick magic sauté and sometimes burn whatever you’re cooking pans. Then again, I might not. But I’d at least listen to the spiel and enjoy the Maidenforms in stainless with copper bottoms. 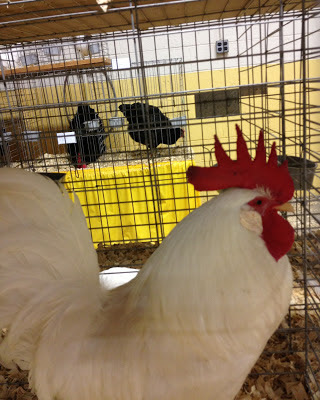 Since the Farm Show is really an indoor state fair, there are cows, sheep, goats, swine, horses, and rabbits, too. An entire room larger than a high school gym was devoted to poultry. There are chickens, chickens, and more chickens. Some even look like one of my favorite cartoon characters, Foghorn Leghorn. I say, I say, that's a joke, son. 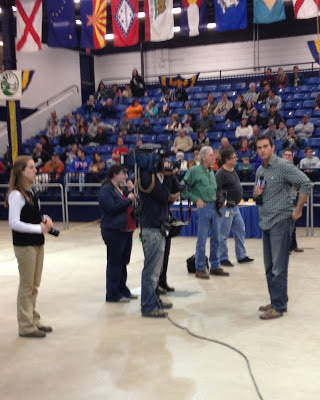 I had barely scratched the surface of the poultry room when it was time to hit the Celebrity Grape Stomping.  Apparently someone thought this was a good way to promote the Pennsylvania wine industry—by having celebs crush grapes like Lucille Ball and Vivian Vance in the famous episode of

I Love Lucy.  Except for one State Senator who could have won the Celebrity Gum Chewing Contest, I hadn’t heard of any of the stompers, though my friend Patti pointed out Matt Barcaro, the eye candy on the Channel 8 News.  He didn’t have much competition in the looks department from his fellow grape stompers, but unfortunately there was no swimsuit portion of the pageant. He did, however, look as if he were ready for the new, improved version of Bert Parks to ask him if he were in favor of world peace. I didn’t get to see the talent segment, I mean his stomping technique. Just before the competitors started stomping, it was time for my shift at the food court. 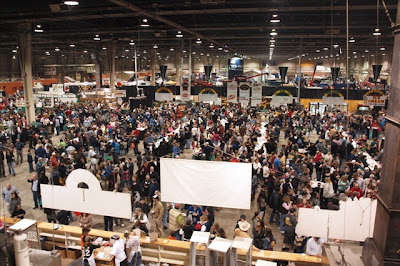 The food court was really something--all the food booths are located in a food court bigger than any you'll find at an average sized shopping mall. My friends and I worked the 6:00 p.m. to 9:00 p.m. time slot, so when we started it was about as busy as it could get—dining fashionably late is not part of the Farm Show experience. There were a bunch of livestock based sandwiches, including roast beef, pulled pork, Italian sausage and beef sausage, hot dogs, and, if you didn’t feel like having your meet encased in a bun, lamb stew. Oh and there was a steak salad, but who goes to the Farm Show for salad? Sandwiches were $4, the steak salad was $5, hot dogs, $2.50 (same as in town, as the punch line of the old jokes goes) and pink lemonade $1.50.  It was somewhat low tech--there were no cash registers, just cash drawers, so you had to do the math in your head as you engaged in witty repartee with the customers (at least I thought it was witty repartee) as you called the orders back to the food runners. To say it was busy is an understatement. According to the Livestock Association, by the end of the Farm Show it had sold more than 7,600 hot dogs, 1,300 pounds of Italian Sausage and over 6,500 pink lemonades. I think my coworkers and I felt as if 90% of the orders were during our three hour shift.

According to the Farm Show program, I missed lots of good stuff, from the Farm Safety Quiz Bowl to the Celebrity Cow Milking and Draft Horse Pleasure Show. So I’ll go back next year, hopefully in time for the Celebrity Putting a Whoopee Cushion Under Your Unsuspecting Mother Competition. That would really be my idea of fun.
Posted by Rick Bryant at 9:48 PM No comments: