After an evening with the swells at Morven, I needed a drink. Since it was too far to walk to any licensed establishment other than Buffalo Wild Wings, I went to the lobby of the Inn at Darden and asked the desk clerk to call me a cab.

The desk clerk and I made small talk and found ourselves in agreement on the proposition that we didn’t care who sneaked into football players' rooms the night before a game as long as our team won. It was kinda like agreeing on the idea that night follows day.

Soon enough, a taxi drove up. I got in and asked the driver to take me to The Corner, the few blocks of student oriented businesses near the University Grounds. 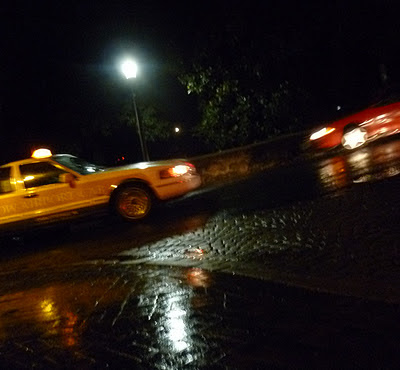 Rick, to Charlottesville cabby: So...how long have you been driving a cab?

Rick, to himself: (insert expletive of choice here).

Rick, to Cabby: Uh, wow. That’s not very long. How do you know where you’re going? Do you have GPS?

Rick, to himself: Kill me now.

Then in a story longer than his career as a cabby, the driver shared that he was on disability and he was from Buckingham County and just driving the cab temporarily for his brother-in-law who was laid up with: 1) tax problems, 2) genital warts, 3) a bingo injury, or some combination thereof, I couldn’t really understand which. The locum tenens behind the wheel, as brief as it was, was going to necessitate a trip to Farmville to make sure his disability check kept coming even though he was driving a cab, which to me meant that he wasn’t disabled. But I didn’t bring up that point with him.

Please, Dear God, I prayed. Please get me out of this cab before he leaves for Farmville.

When he didn’t go the way I would have gone, I resisted the New Yorker moment to tell him he was going the wrong way. But really, he should have taken University Avenue rather than Emmet Street. Even so, before my ear became adjusted to the Buckingham County patois, we arrived at my destination, in the midst of cute shoppes, and as I’m sure they say in Farmville, trendy boites de nuit.

As I was paying the fare, I had a brief out of body experience. I did not know that there were more taxis in Charlottesville than there are therapists in State College. Accordingly, I asked him if he had a card so that I could call him for a ride back to the hotel.  Apparently I thought I could download an app to my Alexander Graham Bell Autograph Model phone that would translate what he said into English. At least I think that’s what I thought.

My first choice of watering hole was too crowded, so I walked down the block looking for Plan B. 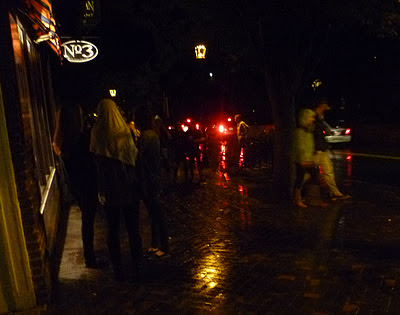 Hey. You wanna hook up?

Soon enough I was at another place with a license. I’d been there once in the cold light of day and it seemed OK.

I got carded. Yikes. If the bouncer’s eyesight was that bad he must have been the world’s youngest person with macular degeneration.

I sat down at the bar and ordered a beer. When a bar, other than a beach bar, serves beer in a plastic cup, it’s just not a good sign. After about a half a beer, I looked around and realized I was the person who was old enough to know better. Unfortunately, it was raining too hard to go gallivanting about looking for a more age appropriate bar. So I did the only sensible thing. I ordered a second beer.

The two boys and girl on my left were earnestly talking about becoming physicians’ assistants. There wasn’t one joke about playing doctor or even an erection lasting more than four hours. How disappointing.

The multicultural group of kids on my right ordered grown-up drinks. But they obviously weren’t my age. They never once talked about putting their parents in nursing homes, their church friend who screwed the baby sitter, or their children’s unfortunate choices when it came to boyfriends, girlfriends, or realtors. 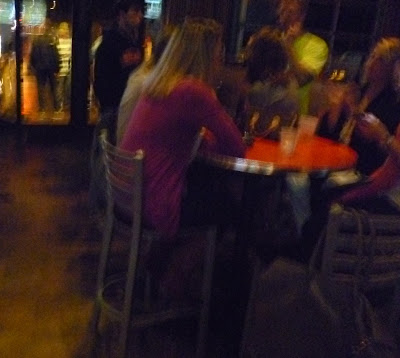 Since I was the oldest person there, I tried to look invisible. And it must have worked since no one acknowledged my presence. Once I’d seen all of that week’s football highlights on the flat TV the size of a drive in theatre screen, I decided to head back to the hotel.

As I was leaving, the people coming into the bar held the door open for me. Eureka, people my age! A young woman was with two people could have been her parents. The young woman and her father were unremarkable looking. He was wearing a windbreaker and Dockers. She was wearing some sort of skinny-ish jeans and sandals.

The person I took to be the mother was a sight. She looked as was pulled from the line waiting to get in one of Las Vegas’s lesser nightclubs. She was doing the full Kardashian in super spikey pumps in faux leopard, a skirt that was shorter than my attention span, and a top that looked as if it sustained heavy collateral damage during a Newt Gingrich glitter bombing. Apparently the phrase, “You’re not going out looking like that, are you?!” wasn’t in the family phrase book. If the mom was a product tester for Frederick’s of Hollywood, she was wearing the Slutty Receptionist at the Department of Motor Vehicles Ensemble. Yikes, I was leaving too early!

I walked up the deserted street and thought about going to The White Spot, but fortunately for my waistline, the thought passed. 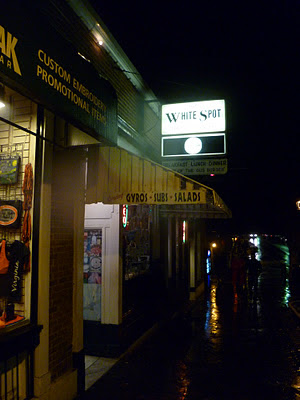 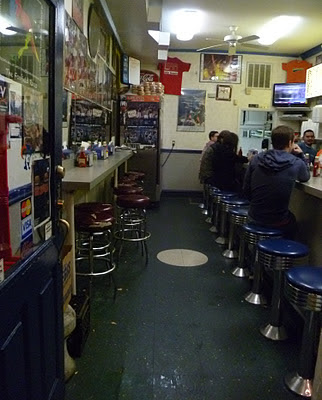 I waited under an awning and called my cab. The cabby said—at least I think he said—he’d be there in fifteen minutes. He was at the hospital or Monticello or hooking up with a woman in a sparkly top and faux leopard shoes. I didn’t quite understand which. On the off chance that it was choice number three, I thought it was best not to ask for too many details on the ride home.