It Wasn't A Dry Heat: The 2017 Stone Harbor Shiver 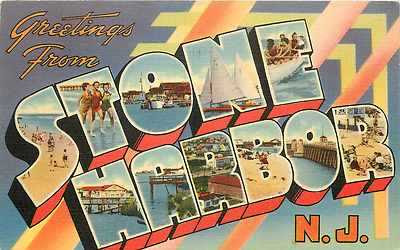 If it’s March, it’s time for the Stone Harbor Shiver, the annual ritual that proves that people who vacation at the Jersey shore don’t get any smarter from year to year…me included!  As soon as they announced the date—March 11—I put it on my calendar.  It’s not something I like to miss.

Team Rick wasn’t playing at full strength this year, since my friends Martha and Bruce decided they were washing their hair or perhaps having their appendixes reinstalled, but Shiver veteran Pam was still game for the annual dash into the icy Atlantic Ocean. 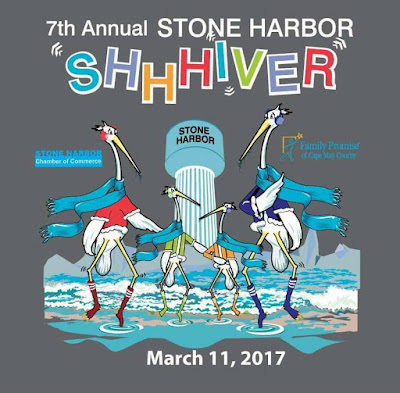 But the Shiver is more than just a dash into the ocean. It’s also a weekend-long fundraiser for Family Promise of Cape May County, a charity that that works with homeless families in Cape May County. The event also raises money for the Stone Harbor Chamber of Commerce so that it can continue to promote Stone Harbor businesses and whatnot. What’s not to like, right? 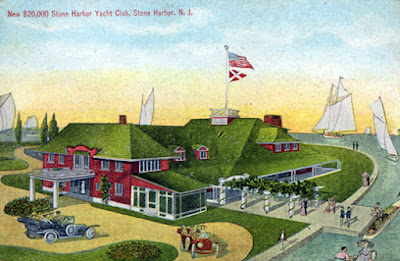 The first event of the weekend is a Friday night buffet dinner at the Yacht Club of Stone Harbor. I haven’t been to lots of yacht clubs, and this one’s not a super luxurious place where you expect to see internationally famous yachtsmen Sir Thomas Lipton and Larry Ellison hobnobbing with plutocrat Thurston Howell III. Instead it’s like an old-fashioned, WASPY, non-Trump-ified, middle market country club, except with sailing themed décor and no oversexed lifeguard to deflower your daughter. (Or son. It is 2017, after all).

In addition to the opportunity to tie on the feedbag, the evening is a chance to pick up your registration packet which—and I thought this was very clever—included a wristband that entitled the wearer to weekend long discounts local shoppes. Other events of the evening included a silent auction, a DJ spinning platters, and 50/50 raffle.

The fare was tasty, served on Chinet plates but with real silverware. It was like a low end Italian wedding. The only missing elements were the chicken dance and a bridal party wearing clothes that you wouldn’t have picked out for them in a million years, even you though you told them they looked great.

Pam and I sat with a nice couple who used to live in Aspen but who’d moved back to Cape May County to rear their kids, and a friendly, fast talking 110% Jersey guy and his protégé who, even if he couldn’t dance and sing, would still make a more than a passable Justin Timberlake at Halloween.  He sure had nailed the haircut.

The best part of the evening was running into our friend Kim, who asked what we were doing in the costume/talent competition part of the Shiver. Not a thing other than being in the audience, we told her.

While our political situation is a target rich environment for late night comics, anything Trump-inspired was off the table since as former Mayor-for-Life Suzanne V. Walters told me once, there are no Democrats in Stone Harbor. 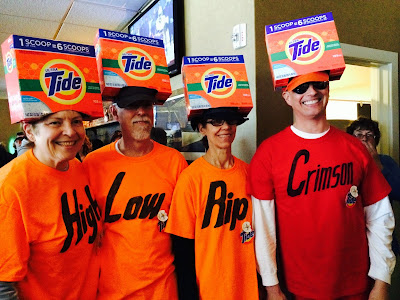 Our high-concept number of the Tides of a couple of years ago, seemed to have flopped but perhaps that’s because I said shit or was that fuck? on stage.

Kim immediately invited us to be on her team, which, masked by the din, I thought she said had something to do with The Village People.  (My favorite was always usually the cop. What about yours?)  She said we needed hard hats and constructions vests, which she could supply. Interestingly enough, Pam and I both owned them, but they were back in State College.

We skipped Saturday morning's kegs and eggs at Fred’s, since we hydrated there with adult beverages after dinner at the yacht club. Instead, we had a hearty breakfast at home as we contemplated the grim temperatures. It was 30 degrees with a “feels like” of 18. Yikes! It was in the 50s the last time we did the Shiver and that was still plenty cold.

Since we would be standing around outside for a couple of hours with the procession, talent show, concert by the Fralinger String Band, and requisite farting around, this called for brining my A-game to the Shiver fashion scene. Plus, you never know when any menswear bloggers who regularly use the term “bespoke” might be in attendance.

I wore red Vans, two pairs of socks—long bright orange numbers and heathery blue SmartWool jobs too —over white Under Armor leggings, my green and white floral Lands’ End swim trunks, not to mention a navy Under Armor turtleneck, a white long-sleeved tee shirt, a black fleece, and finally a royal blue half-zip fleece, topped off with an official 2017 Women’s March style pink pussy hat knit by a woman from church. I looked as if Lily Pulitzer had outfitted a polar expedition by shopping at a Junior League thrift shop.  And while I didn’t run into The Sartorialist or any menswear bloggers who used the word “bespoke” in conversation, I did get several compliments on my look, from both women and men, and that was even before I put on my hardhat.

I think Pam wore every layer ever invented and since she travels with steamer trunks (yes, trunks,  plural) instead of an overnight bag that’s lots of layers. She opted for lot of basic black, though her wardrobe also featured judicious jolts of anthracite, onyx, obsidian, and raven. I thought of it as New York chic vs. the elements. She had to have been warmer than I was. 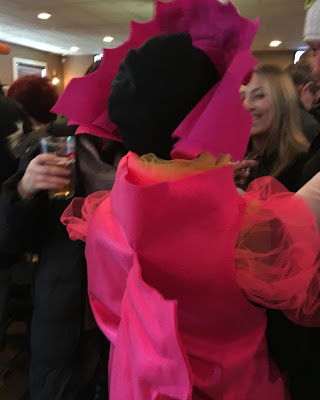 Shortly before noon, we went down to Fred’s Tavern to join our fellow Shiver-ers. Even with a 20' by 40' walled tent set up next to the back door of the restaurant, the place was packed. I tripped over a woman dressed as what I thought a lobster, but I later learned was a seahorse. Fortunately, the cold weather seemed to have kept the people who wore lame rented costumes—and there were always too many of them—at home. 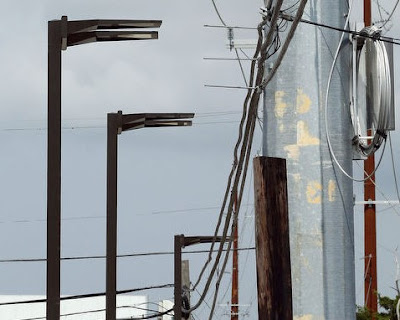 Kim's team was the Peeps Polar Patrol, which was a dig at Atlantic City Electric’s new power poles that are have created quite an eyesore in Stone Harbor. They’re horrible. And it seems as if the project might have cost former Mayor-for-Life Suzanne V. Walters her job, since she was easily defeated in the last primary election. I didn’t ask about the Peeps business, but it did add just a soupçon of Dada to our team. If I’ve said it once, I’ve said it a million times, Stone Harbor needs more Dada. 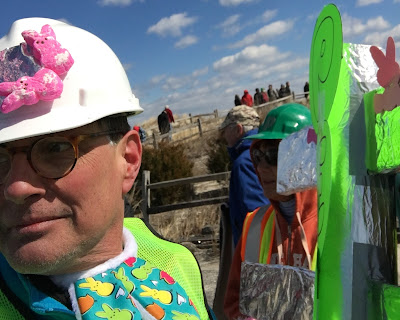 Kim had hard hats and safety vests and lots and lots of marshmallow Peeps, which we tried to affix to our hard hats, safety vests and whatnot. The cold weather made it difficult but enough stuck here and there to make us look like Peep-el who need Peep-el, the luckiest Peel-el in the word. We were a very lucky bunch.

I was assigned to carry one of the three large silver mock telephone poles which carried signs that said Peeps Pole-R Patrol. They were somewhat crucifix like, and the fact that there were three, well, I guess that was a little Lenten foreshadowing. I looked at the poles and chuckled: “thou shall not crucify mankind on a cross of silver” a quip that only Marian Bressler, my high school AP History Teacher, would have appreciated. 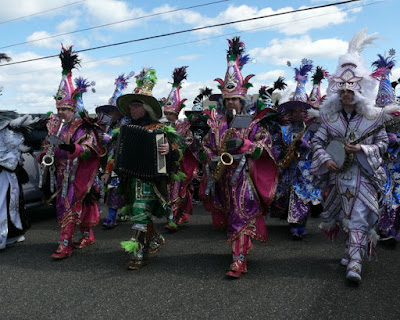 At the appointed hour, the costumed revelers including the Peep Pole-R Patrol lined up in Fred’s parking lot and followed Philadelphia’s Fralinger String Band as it marched down the street playing what sounded like their greatest hits. Their flashy, foiley, and feathery costumes put any Shiver-r to shame and added a touch of the exotic to the day.  People from central and western Pennsylvania agree that there’s a lot not to like about Philadelphia (starting with its sports fans) but we can all agree that Mummers put on one helluva show.

We processed down 96th Street, the heart of Stone Harbor’s business district, to the side yard of the Women’s Civic Club. The Fralingers played a couple of numbers as the event judges took their places in lifeguard chairs. Before the costume contest/talent show started, the emcee announced that the oldest shiver-r was 83 years old, and that the youngest was 6 months old. Fortunately, the parents of the youngest—his father was a fellow pole-toter on the Pole-R Patrol---were bright enough to leave him wrapped up as a giant blob of fleece and baby blankets and were not planning to take him into the water. The 83-year-old, however, looked as if he were ready for a swim. 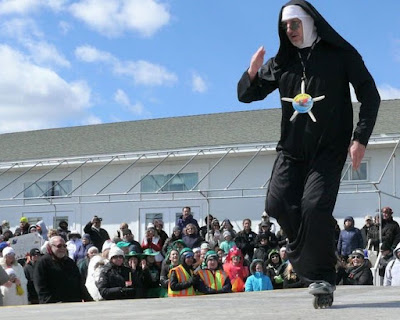 After the oldest/youngest business, the judges were in place and each individual or team took to the stage to do their thing to the hearty applause of the crowd. It was fun and very small town, but each year I think that Rehoboth Beach probably does this better, with a healthy dose of over-the-top gay humor. Perhaps I’m supposed to be adding that instead of saying shit or was that fuck? on stage. Oh well, epic fail. 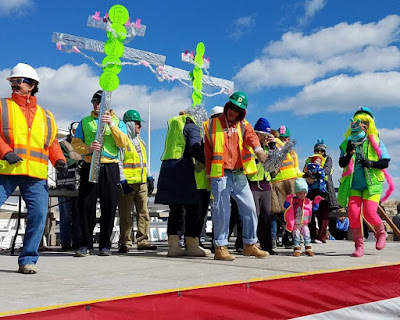 When it was the turn for team Peep Pole-R Patrol, as telephone pole #1, I led our crew to the stage. The DJ played our theme song, The Electric Slide, and the dozen or so of us in Peep-adorned hard hats and safety vests did the electric slide. Sort of.  I’ve never learned that dance (you’re shocked, I know) but held my giant pole and swayed to the music as if I were back at Tracks, the late and lamented D.C. dance club. For a bad talent show act, we were pretty good, if I do say so myself.

Shortly after our turn on stage, the emcee announced the winners, and Peep Pole-R Patrol won the prize for best team name, allowing Pam and me to dip our toes into the winners’ circle for the first time in many Shivers. It wasn’t quite like the Chicago Cubs winning the World Series in 2016, but almost.

Just before our teeth started to chatter, all the Shiver-ers headed over the dunes to the beach for the dash into the sea. It was a smaller crowd than usual. The air temperature of 30 degrees with a “feels like” of 18 degrees and the water temperature was 41 kept the short hitters at home. 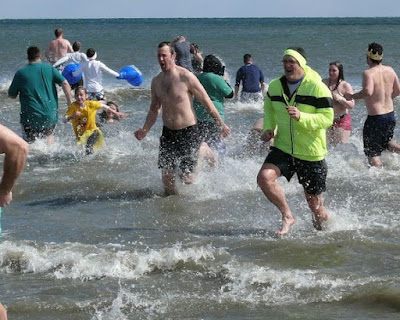 It took me a while to shed some layers ---you want dry clothes to put on when you get out—so I wasn’t the first one into the water. But I did it, and went THE WHOLE WAY IN. Yikes, was it cold. As I was running out I thought I’d never get to dry land, though I did stop to rescue a floating pink Peep that had come off someone’s costume. 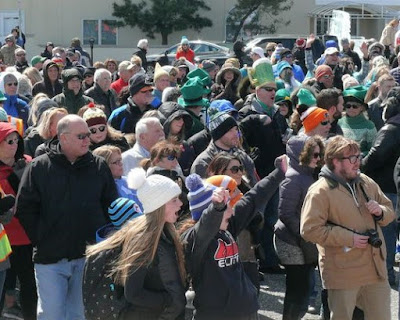 The Stone Harbor Shiver is like a great pagan festival. There’s lots of merry-making, a generous helping of ritual costumes, followed by a procession to the water’s edge (OK, well, it’s actually the vacant lot next to the Women’s Civic Club) where after musical offerings, the faithful have what passes for a gladiatorial contest, and then the march to the sea, where the most devout go in for ritual bathing in the icy Atlantic Ocean.

After the bathing, there’s more celebrating and gradually the pilgrims return to their homes, firm in their belief that all is right in the world for another year, or at least until they look at the news and say shit or was that fuck? to anyone within earshot.

Posted by Rick Bryant at 9:09 PM No comments: