I recently spent some time at Lowe's in Rio Grande, NJ (Rio Grande is not just a place in Texas) looking for a new toilet seat. I didn't think toilet seats broke, but they do. Or at least mine did. In the face of two dozen different models,  I opted for the Bold Look of Kohler, though really, how Bold is it when you buy the plain ordinary while model? I thought about getting the NASCAR Jimmie Johnson #48 seat but number one, number two, and number forty-eight was more math than I wanted to think about as I perform my morning ablutions. 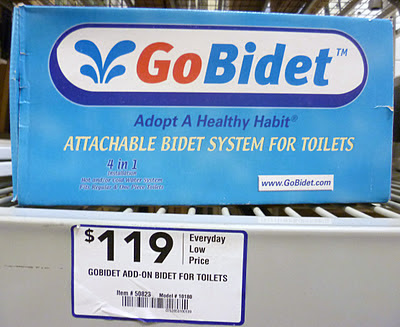 Until  the toilet seat buying expedition--which entailed going up and down every aisle in the plumbing department--I never knew that the GoBidet Attachable Bidet System for Toilets even existed. What a great aftermarket accessory!  Who new that there even were aftermarket accessories for toilets?! If someone's selling a magazine rack that attaches to your American Standard, it's news to me.
Oh wait, there is the Big John, a generously scaled toilet seat for folks who are especially broad in the beam, and I suppose that's an aftermarket accessory.  But seriously, if you want to trick out your toilet, I don't think that you don't have too many options.
The GoBidet is an add-on hose and nozzle dealie that turns your toilet into a bidet. Nice. There was only one left, which made me wonder if the Real Housewives of New Jersey had caravaned down to Rio Grande and and snatched them up...so to speak. (Yes, I find myself so amusing.)
In my copious quantities of spare time, I went to the GoBidet web site (prominently displayed on the box) and learned that bidet is a French device for washing your you-know-what. Your place, to use the clinical term. The GoBidet web site points out the numerous benefits of a clean you-know-what while the rest of you is a cocktail of body odor, Chanel No. 5, Gauloises cigarettes, and garlic. These benefits include a fuller understanding of the metaphysical novels of Simone de Beauvoir, an appreciation of the comic genius of Jerry "Le Nutty Professor" Lewis, and quite possibly a clue as to how anyone could buy a car as ugly as the Citroen DS.
Sure the GoBidet comes with two warnings.
1. Don't turn it on at full blast. You'll learn why Third World dictators use water cannons to disperse protestors.