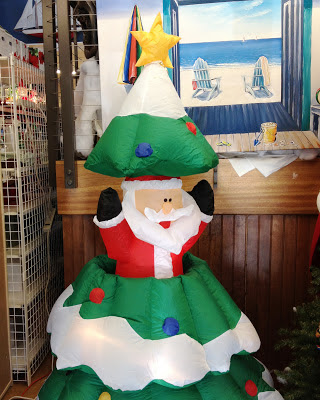 Christmas was earlier this week and like so many of you, I had the opportunity to spend some time in the bosom of my family. We exchanged gifts, had dinner, and did the over the phone speed dating thing with those who didn’t make it back to Centre County for the holiday:

Hi (insert relative's name here), how are you?

Did you have a nice Christmas?

As Bryants, it's important to pass the phone off before any actual feelings kick in.

Next year we'll be doing the ritual by text message so there is less of a chance of actual emotional connection. There's no need to get all touchy-feely just because it's a holiday.

I’m only a little sad that my sister didn’t alert me to Christmas morning's annual display of machismo—as in chopping, splitting, and stacking firewood. She and our brother (and the brother’s GF) dispatched entire pickup truck load of firewood without my help. I’m not sure if they thought I would I would bring down the testosterone level or increase the klutz level, but the answer, of course, is both. 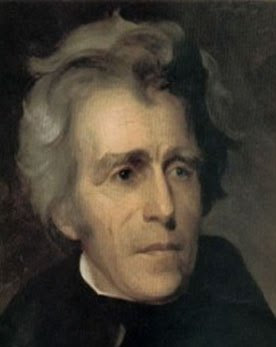 However, had I been splitting and stacking firewood with my two grown nephews, we would have no doubt re-kindled (pun intended) the conversation we always have when we split and stack firewood, which we've done more than a few times. Sooner or later (actually, there's no later about it, it's always sooner) someone brings up Andrew Jackson and the relationship of his nickname "Old Hickory" to his sexual prowess. Cialis didn't invent the four hour erection, if you follow my drift. Wait, you didn't learn that in school? Yes, in our telling he was practically the Ron Jeremy of The War of 1812, giving new meaning to the "Era of Good Feelings".  American history doesn't have to be boring!

Back to the holiday celebrations. During dinner we took a break from talking about NASCAR, guns, flatulence, and the history of executions in Centre County (you think I'm making this up, don't you?) when my siblings and I discovered that we shared a common interest: discount emporium Ollie's. The home of "good stuff cheap".


"Good stuff cheap”. This, of course, translates into colloquial English as “stuff that I can’t believe that they even manufactured much less expected some schmuck to buy and it fell off a truck, too. Cheap-ish.”  Actually, I’m quite thankful that we still have places like Ollie's. It demonstrates that in an age when Walmart knows everything there is to know about the American consumer, other than how to get people to stop dressing like the People of Walmart, it’s a treat to go to a store where crazy is the name of the game.


My brother Jim regaled us with the story of going to a “private sale” at Ollie’s. He gets invited to these A-list events since he’s a member of “Ollie’s Army” along with the spousal units of high ranking Penn State officials and people who are neither fashion forward nor photogenic enough to make it into "People of Walmart."  My pre-Christmas foray to Ollie's wasn't exactly filled with face time with bold faced names the way his was, but it was still a good time. 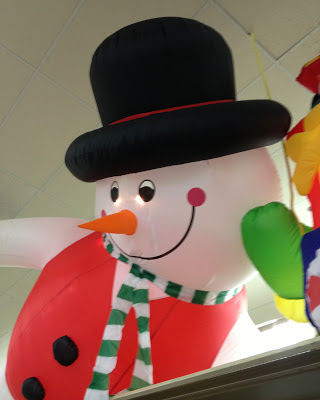 Ollie’s is a great place to go for inflatable Christmas decorations. Who would have thought that the world needed an Inflatable Lounging Snowman with a come hither look. I don't know about you, but I don't like it when a snowman undresses me with his eyes. 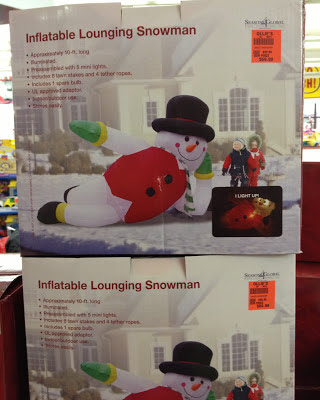 What do snowmen do all day that they need to spend time lounging?

In addition to inflatables, there is a selection of books, including a Christian section. 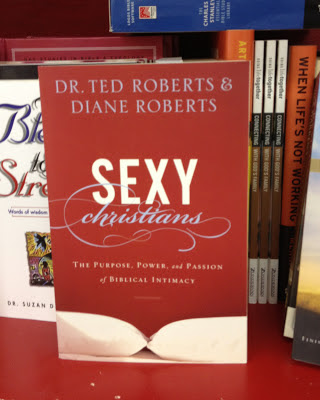 You have to go to Volume Two of "Sexy Christians" for the discussion of cruising people in the Communion line. 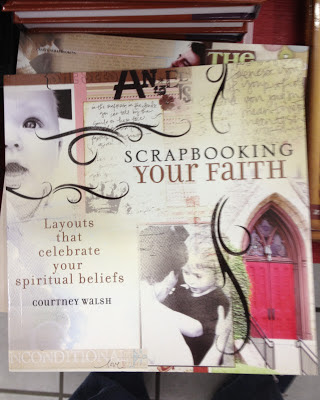 Previously I've only had religious experiences with layouts in certain men's magazines. 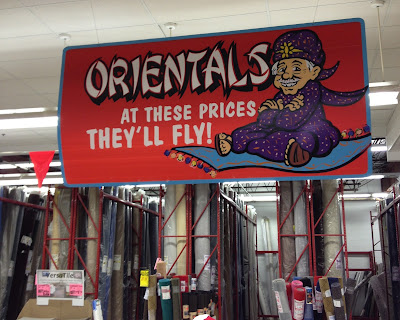 And then there’s the rug section, also known as your cultural sensitivity headquarters. I think the guy in the sign would get better performance out of that flying carpet if he were wearing those shoes that curl up at the ends.

As you await my next blog post, I have thoughtfully prepared a reading list of items that you can find at Ollie's. 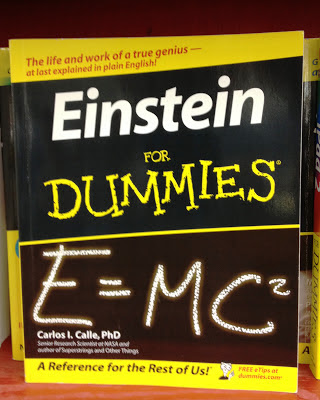 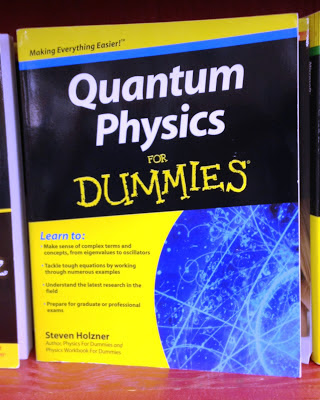 These are just the warm-up act. 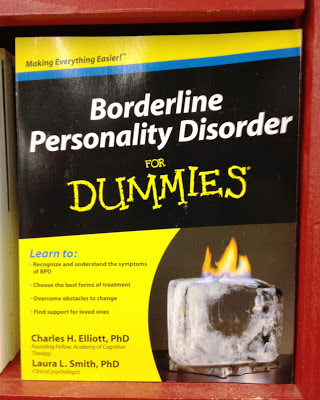 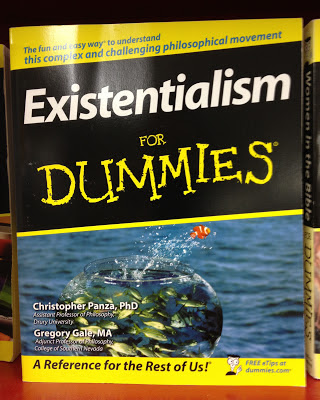 Chapter 1: Why? Chapter 2: Why Not? Chapter 3: France and Jerry "Le Nutty Professeur" Lewis. 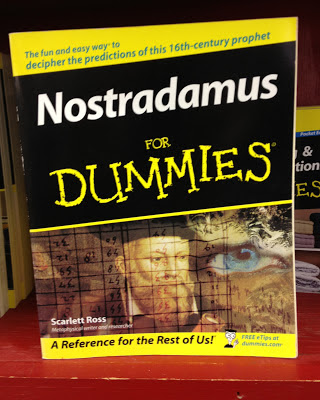 Does it really get any better than Nostradamus for Dummies?

Why yes, it does. 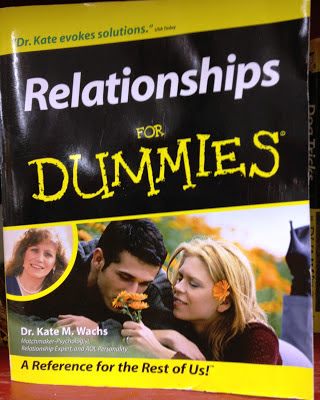 Chapter Headings include: Marry A Girl, Marry Her Family--Especially in West Virginia;  It's Not Me, It's You. It's You Alright. Definitely You; and I'm Not Going to Say It Except This Once, But I Told You So.

Oh, and how could I forget?

Posted by Rick Bryant at 7:32 AM No comments: 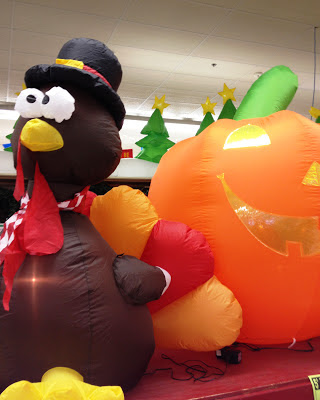 So...it's almost Christmas and I've missed Halloween, Thanksgiving, and Pearl Harbor Day, too. Apparently I was too busy wandering. So, first things first: Halloween. The other adventures will have to wait.

I never carve a pumpkin into a reasonable facsimile of a Faberge egg or even a run of the mill jack-o’-lantern. And I rarely dress up as anything out of the ordinary, unless you count party trousers as out of the ordinary. Nevertheless, I consider handing out Halloween candy to trick or treaters to be a civic duty. Even though I grumble each time the doorbell rings during The CBS Evening News, I leave the front porch light blazing during the designated hours on the designated day to take part in this occasionally charming, middle American ritual. Actually, I think it's so important that I've even brought in substitute candy hander-outers when I've had to be out of the house on Trick-or-Treat Night.

I keep track of the audience numbers by counting the empty Kit-Kat bags, and in most years I get about 150 trick or treaters. They run the gamut from tiny to too old to be trick or treating. Things have changed since I was a kid--my parents wouldn't have been caught dead going along with my siblings and me--but today, parents are always lurking at the end of the walk. The kids' costumes range from a little gypsy number that Mom threw together for her toddler to a little gypsy number that an MFA candidate threw together in the Penn State School of Theatre costume shop. The latter, of course, comes complete with a short, impromptu drag performance, as Cher, of Gypsies, Tramps, and Thieves. It's almost like getting a home delivery of karaoke.

My favorite costume this year belonged to the kid—I’d guess he was a senior in high school—who wore a black gaucho hat and was otherwise dressed head to toe in skin tight black Under Armor. When I asked what he was, without a touch of irony, he said a cowboy. I burst out laughing, gave him an extra Kit Kat, and was reminded why I enjoy handing out Halloween candy. 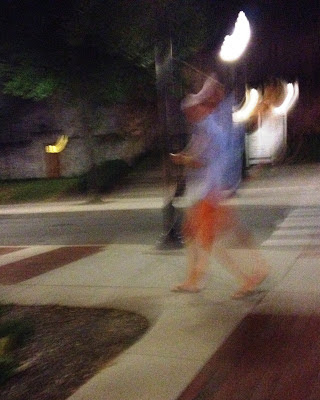 This year I also walked downtown to take in the pageant of Penn State students in costume. If the Princeton Guide to Colleges rated schools based on Halloween costumes Penn State wouldn't make the list. Bad rented costumes, the order of the evening, are a big FAIL in my book. No creativity. No humor. No going over the line. No nothing. Most kids seem to go to costume rental shoppes and grab the first drecky number they run into. My guess is that this is just a practice run for when they finally get into a bar, knock back a few shots, and then repeat the ritual by grabbing the fist drecky number they run into. 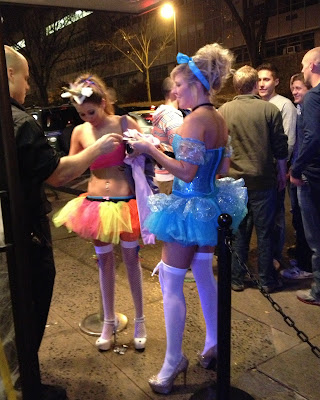 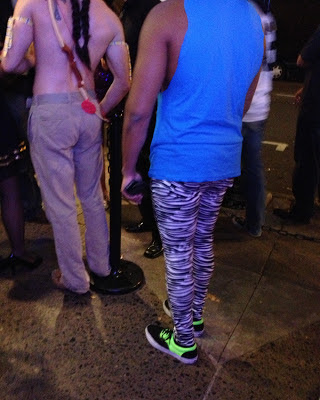 I meant to ask this guy if he was supposed to be Simon Le Bon or Nick Rhodes but instead decided that he was Richard Simmons getting ready to play the home version of Daktari. Apparently his spandex pants didn't come with the optional iPhone codpiece. 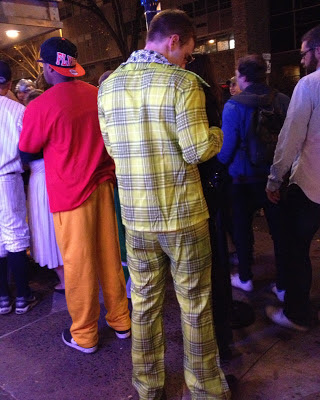 If you're going to wear a rented something that is either supposed to be a Leisure Suit or upholstery from a 1978 Ford Maverick you could at least iron it. I lived through the 1970s. Back in the day, we rejoiced in no-iron Herculon. I think it's a product of the Space Program, like Tang, the instant breakfast drink. 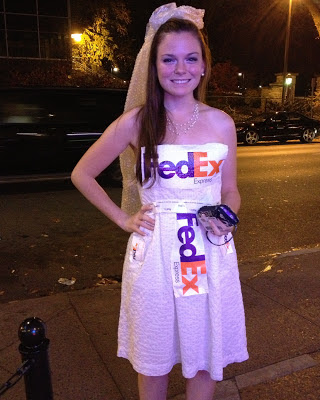 This was my favorite costume of the night. Yes, she's a mail order bride. I don't remember what she was majoring in, or where she'd been earlier that evening, but I am sure if I scanned her bar code all that info would be at my fingertips. 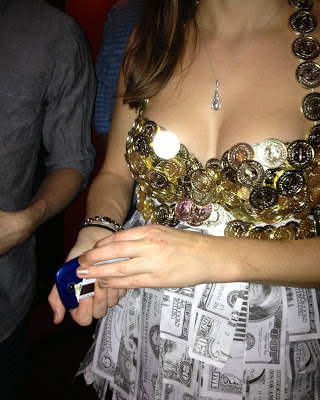 The Wandering Wahoo meets cleavage. Who knew?  Wonders will never cease. The woman in this very nice home-made frock told me that she was supposed to be the bank bailout. She didn't seem to have a dirty enough mind to have thought of calling herself the Stimulus Package, though Chumley's, where this photo was taken, is not the kind of place where cleavage normally stimulates a package. 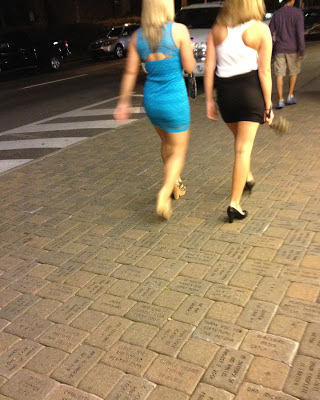 These women are not in costume. Unless they are dressing up as co-eds with bad taste who don't own a full length mirror and never thought to ask the question, "Does this too short and too tight dress make my ass look fat?" But my guess is that these are real clothes...even though they are scarier than most costumes. 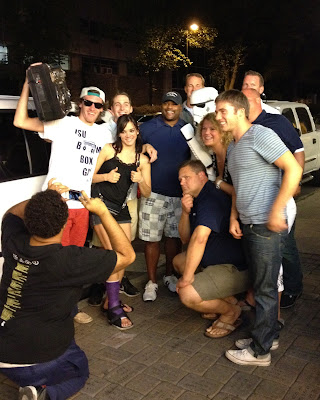 Here is another posse of Penn Staters, also members of the control group, as in, not in costume. Yes, there is a person who walks around State College on fall evenings toting a Boom Box wearing a t-shirt that identifies him as "Boombox Guy". Subtlety is not his middle name. Are you surprised that he's chummy with a guy who owns a Star Wars Stormtrooper outfit? What can someone who dresses up as a Star Wars Stormtrooper on any old night would possibly wear for Halloween? 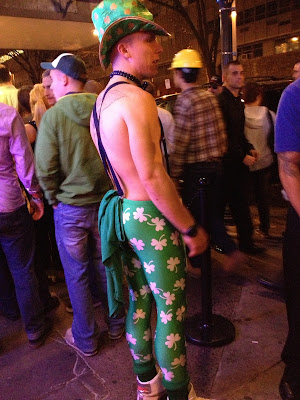 It's not often that you see a guy dressed as someone from the Fashionista Wing, Chippendales Division, of the Irish Republican Army. But I was having some of the luck o' the Irish, so to speak. The other 364 days of the year, this guy is one of the People of Walmart.

I'm finally getting around to this blog post at about the same time I'm finishing with  my leftover Kit Kat bars--they were Princess Diana's favorite, you know. Perhaps next year, I'll wear a costume when I hand out candy. Do they make orange martini pants in spandex? Fortunately (for me, at least), I have almost a year in which to find out.
Posted by Rick Bryant at 5:22 PM 1 comment: