The Wearin' of the Orange

New Yorkers and arty architects seem to think that black and its upscale cousins anthracite, midnight, raven, onyx, coal, and whatever J. Crew calls black next is the height of chic.

You'd probably be sent to social Siberia if you wore orange (rust, apricot, persimmon, pumpkin, etc.) in New York. I can imagine orange trousers consuming an entire episode of The Real Housewives of New York City. Simon thinks he looks fabulous in his new orange vinyl trousers. A dust-up at the opening of a new Chick-Fil-A in The Hamptons ensues when Fake Countess LuAnn mistakes him for someone in a jumpsuit picking up garbage by the side of the road in a court-ordered program for fashion offenders. 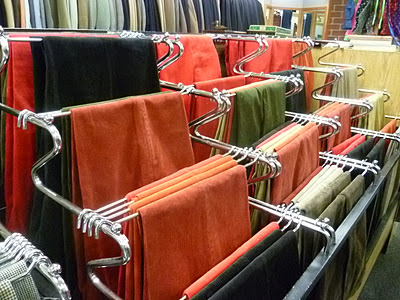 I'm one of that small minority of folks who not only thinks that orange trousers are great for other occasions besides the first day of deer season. So when I was in Charlottesville, I thought I'd check out the clothes you can't buy in State College. 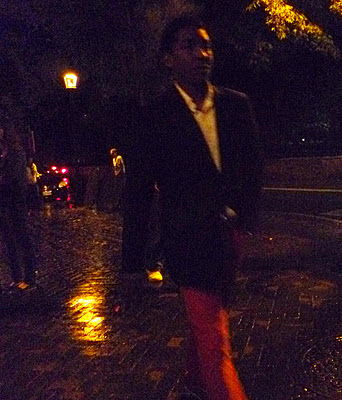 Orange trousers are particularly good when it's dark and raining and you don't want to be hit by a car. 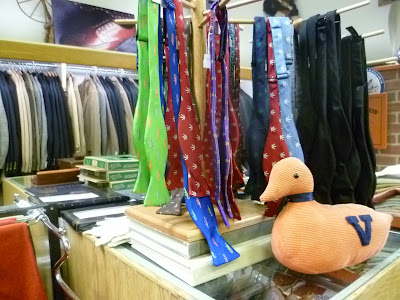 And if you're going to wear a bow tie, bright green seems like a good bet. You can put the lime in more than just the coconut, you know. 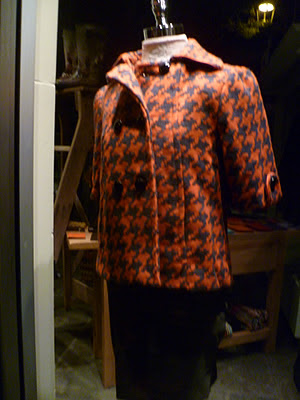 For the drag queen, this boxy blue and orange houndstooth Jackie-esque number would be just the thing to make a big splash in the President's Box at a UVa football game. It would perfectly compliment that Coach (yes, the outlet) tote bag holding the trusty Vitamin Water bottle filled with with Ketel One, charger for your old phone, four different kinds of breath mints, and an envelope filled with Val Pak coupons. You never know when you'll need a coupon for half off getting your draperies cleaned. Oh yeah, you'd need pants or a skirt or something too.This thing is guaranteed to make your ass look fat.

When I was in school Mincer's Pipe Shop ("This is Bobby Mincer. May I hep yew?") actually sold pipes--think Sherlock Holmes rather than Bob Marley. It also had a few tee shirts and a great selection of "hurt" books, which must have been what they called seconds. There was always an amusing impulse item next to the cash register. They had those things weeks before I found them anywhere else. I had a feeling that marketing people in New York conference rooms sat around and said, "I think it's funny and will sell, but I don't know what the public thinks. Get me Bobby Mincer! A phone call is placed : "This is Bobby Mincer, May I hep yew?" And the next thing you knew, C-ville was the first place with Pet Rocks, The Official Preppy Handbook, and the Toga Party in a Can. 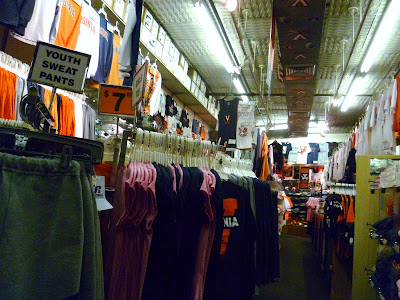 Bobby Mincer is now retired and is no longer around to hep yew. The place has morphed into the space next door, so it's twice as big as it used to be. There isn't a single pipe of the Sherlock Holmes or Bob Marley variety. Instead there is a remarkable selection of UVa wear, right down to the now familiar tee shirt with the Old School Tie imprinted on the front. Just the thing to wear to the opening of a Chil-Fil-A in The Hamptons or anywhere else. 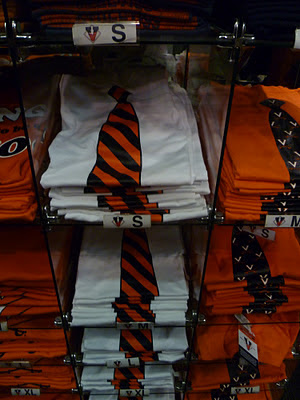