Last weekend, I went to Charlottesville for an Architecture School function. The school has an annual dinner to thank donors, and they try to hold it at an estate in Albemarle County. I try to go when it's someplace interesting, since I like to gawk at a fabulous estate as much as the next guy. Who knows, maybe I'll meet millionaire Bruce Wayne someday. 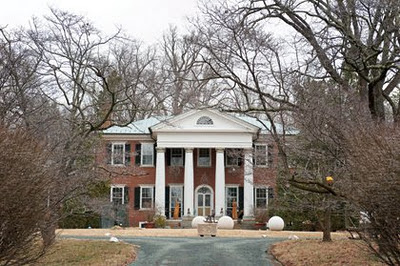 A couple of years ago, it was at an estate called Estouteville, built by Thomas Jefferson's master builders. It's one of the grander places in Albemarle County. And except for some fairly strange sculptures in the yard, it looked as one would expect it to....red brick, white columns, bottle green shutters on the windows.

The interior, however, was another story entirely. It was Winterthur meets the Addams Family. The furnishings were mostly in a style called Early Bizarre, and there were about eight jillion flickering candles in the shape of human skulls. The walls were painted in an array of garish colors. There were paintings hung on the ceiling, furniture made from concrete, but with fur accessories. It was as if Sister Parrish had taken peyote with her English Breakfast Tea, and then decided to skip the tea and just stick with peyote. 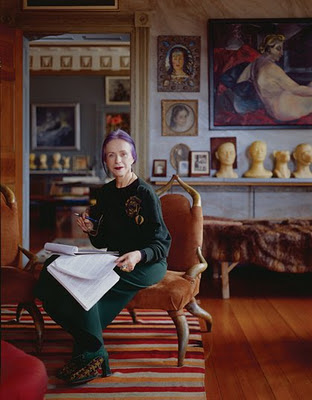 The dinner wasn't in the house, but in a large white tent erected in the yard. After the tasty repast of food that's supposed to be served hot but wasn't, there was a post dinner speech by the estate's owner. Her name was Beatrix, Trixie to her friends. She wasn't dressed by top American designer Michael Kors, but instead was put together in sort of Isadora Duncan doing Kabuki sort of way. Her speech focused (ok, rambled is more like it) on how she and her husband, Ludwig, (aka Wiggie) decided to move from New York City and consulted a Ouija Board to find out where to move. The Ouija Board led them to Albemarle County. Most spirits can't spell "Albemarle" so theirs definitely had something going for it.

Once Trixie and Wiggie got to Virginia, they drove around  the countryside until they ran into a man in a sombrero who led them to Estouteville. The rest, as they say, is history. Some people have all the luck. I lived in Charlottesville for four years and never once saw a man in a sombrero.

Except for my friend Pam, who returned my "this woman is looney tunes" look, I couldn't tell if anyone else at my table thought the speech was the least bit out of the ordinary. When I returned to my hotel after the dinner, I Googled Trixie and Wiggie and found out that  he was under indictment for stealing from the textile company where he was CEO. Hey, candles shaped like human skulls are expensive!

So you can see why I like to go to the diner. As rubber chicken dinners go, they can be pretty darned entertaining.

This year's school dinner was held at Morven, the former home of John Kluge, one of UVa's most generous benefactors. The house was built in the early 19th century. 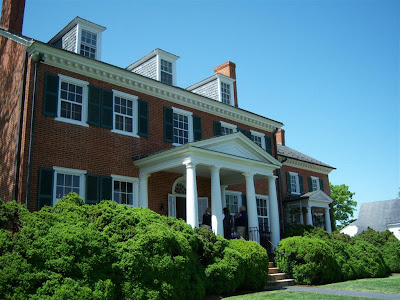 Though Mr. Kluge's furnishings were sold at auction by Christie's, the house is still quite elegant and easily holds 100 or so architect types, all of whom are wearing some shade of black. The University uses Morven for official functions, and various units of the University are undertaking research projects there. 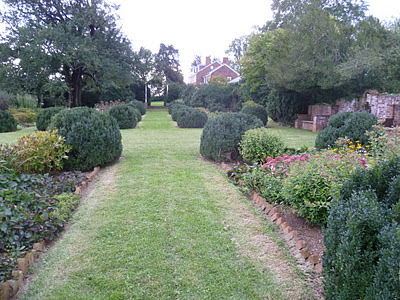 The gardens are particularly spectacular, and there is a formal garden and also a Japanese garden, complete with tea house. There was an attendant at the door to the tea house who reminded us to take off our shoes before entering. I asked her if she was counting the number of people who had holes in their socks. She chuckled which I took to mean yes. 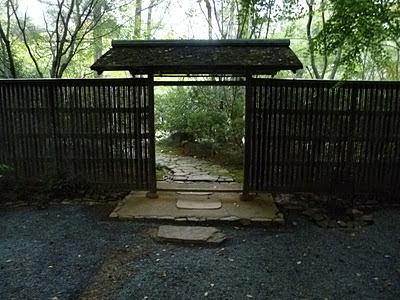 Dinner was in the "fun barn" which wasn't a barn at all, but a banquet room and adjacent movie theater. I was seated between the Dean of the Architecture School and the head of the School Foundation. Since the dinner is all about fundraising, I was a tad concerned that they thought I was low hanging fruit. So to speak. Alas and alack, not only did they not ask for money, no one even asked for my phone number.
The food was hot food that wasn't hot. It's apparently a local specialty. The acoustics in the dining room weren't very good, so it was difficult to hear others at the table, but they seemed nice and quite adept at making polite small talk over dinner. To there best of my knowledge, there wasn't a single joke about a Rabbi, a Priest, and a ham sandwich. I did tell my dinner partner, the Dean of the school, that I only came to the dinner when it was someplace interesting. She seemed a bit surprised, or at least surprised that someone would admit it.
A short time later, she worked my admission into her after dinner speech. Not quite the same as mentioning a Ouija Board and a man in a sombrero, but it would have to do.
Posted by Rick Bryant at 10:04 PM