I haven’t been anywhere in a long time. A LONG time. Pandemics will do that to you.  I had tickets to see Hamilton on Broadway and also to go to Mexico in March 2020 when everything stopped. Oh well. After a while you think that staying home is normal. At least I never got COVID. Plus, I never ran out of TP, yeast, or anything else that was subject to fits of panic buying last spring.

But, in 2020 I was invited to a summer wedding in Massachusetts...the daughter of old friends. Of course it didn’t happen. Alas. I got a 2021 invitation—looking just like the first one—for the second try. Do rescheduling brides and grooms drop their B-listers? Yes? No? Maybe? I was glad to be spared that case of social leprosy. 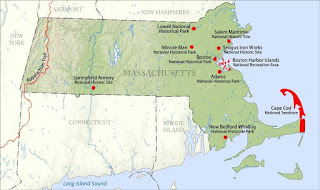 My last trip to the Bay State (actually, it’s a Commonwealth) was in 1998, so much of Massachusetts is unplowed ground for me. I was excited to go.

Plus, I get a charge out of taking my new/old (as in 2007 Mercedes) car on a trip. A sport sedan is so much faster and more comfortable than my Ford pickup truck. And it’s kinda sexy. I try to ignore the fact that it takes premium gas. I had the oil changed, got two new tires, and washed and vacuumed it right before the trip. 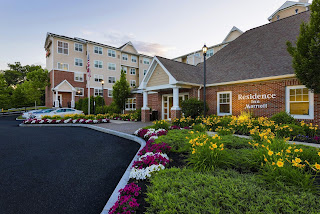 I booked a room at the Residence Inn in Worcester, since that was one of the hotels suggested by the bride and groom. According to Google maps, it was near the Interstate--with EZ on and off. Added bonus: was near a McDonalds, a Suboxone clinic, a weed store, AND that Massachusetts spécialité de la maison, a rotary intersection. And I’d get Marriott, I mean Bonvoy, points. What more could an aging doofus traveler want?

As you might expect, the hotel was perfectly nice. Not exactly an architectural gem and a world apart from that old fave Wynn Las Vegas. But it was clean and quiet. The towels were fresh, if not fluffy, and the TV had a bunch of apps that I didn’t have the patience to sign into. 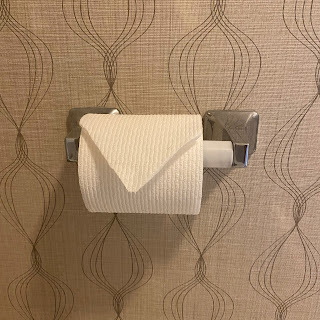 And like four-star hotels everywhere, the end of the TP was folded into a point. 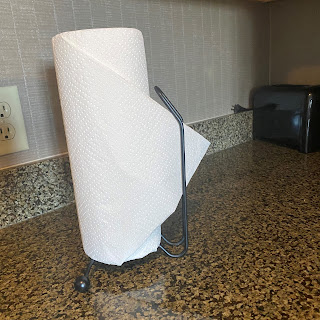 Even better, the end of the paper towel roll in the kitchenette was folded into a point too. That, my friends, is the sign of a classy joint.

Friday evening I had dinner with high school friends who live in the area. We went to a hip and trendy Mexican place. It was a great time with plenty of laughs. We’re old, so it never occurred to us to take a photo. So, you’ll just have to take my word for it that they looked great and haven’t aged a bit. We even found our car in the parking garage without too much trouble. As Charlie Sheen would say, Winning!

Saturday morning I skipped the hotel’s “Grab and go” breakfast, which sounded way too much like a high fiber cereal and a banana for my tastes. I braved the rotary intersection, passed the weed store and Suboxone clinic to get a McDonald’s coffee. I told my GPS to point me towards Lexington and Concord, to see the spots where the American Revolution started. I’ve done a jillion historic sites, but somehow I’ve missed that corner of American history.

Roughly speaking, Minute Man National Historic Park covers the route between the towns of Lexington and Concord where British troops and American militia skirmished on April 19, 1775, setting off the American Revolution. It’s a small park—a few miles long and a few hundred feet wide at its widest. I wished that I had time to walk from one end of the park to the other—what a great way to enjoy the beautiful day!

There were plenty people around but I’m not sure how many were bona fide tourists. It looked as if lots of those folks were locals out for a jog or bike ride. Fancy strollers, techy backpacks, and lots of moisture-wicking athleisure wear. 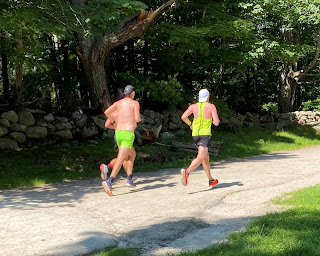 As one would say in The Castro or in West Hollywood, there was a lot of beef on the hoof. 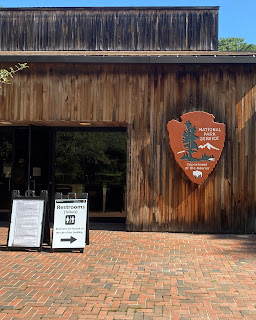 I started at the park’s visitors’ center to pick up a map and to get the lay of the land. There was lots of quoting of Longfellow’s poem, The Midnight Ride of Paul Revere, and when they weren’t quoting that, they were quoting Ralph Waldo Emerson, talking about the rude bridge and the shot heard round the world. Longfellow and Emerson certainly saved the Park Service a lot of money on writing museum text panels. 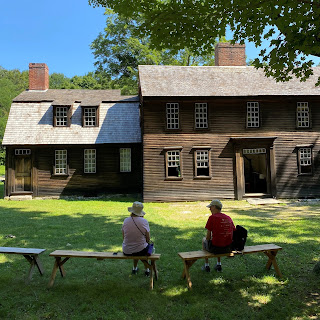 After the visitors’ center, I dropped by the Hartwell Tavern, a restored 18th century place staffed by what we used to call costumed interpreters. 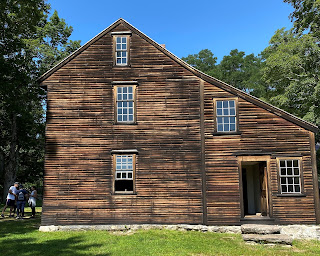 The building was what the park calls a “witness house”, as in one that was standing in April 1775 during the battle. 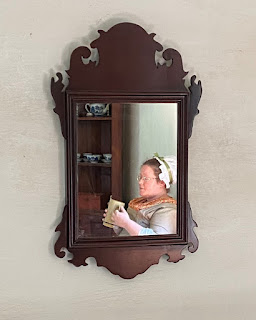 On one side of a house, a nice young woman with lots of gumption—who was also the firearms instructor for the re-enactors—shared the story of Mrs. Hartwell and her 14 children. Spoiler alert: not all of whom lived to adulthood. 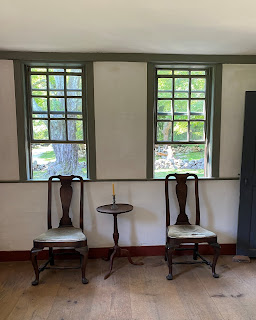 I resisted the chance to ask if Mrs. Hartwell might have been the inspiration for the Dr. Suess character, Mrs. McCave who had 23 sons and named them all Dave. 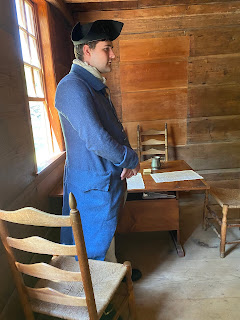 Two earnest young men, also in Colonial era duds, were in the other room. 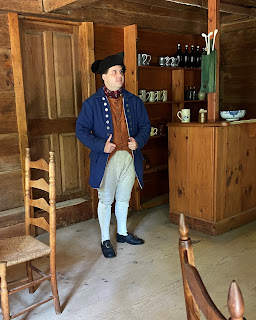 I thought of one as the guy you’d like to talk to at a bar and the other as the wingman who doesn’t pick up the signals to make himself scarce. The three of us talked about bleeding as a medical treatment. Fortunately, none of us had any firsthand experience with the subject. 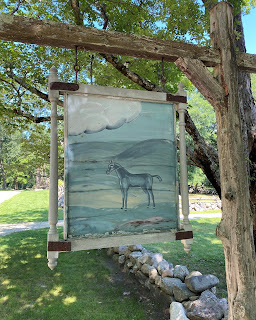 After the Hartwell Tavern, I checked out the spot where Paul Revere was captured by the British--you knew that Longfellow engaged in some poetic license, didn't you?--and then drove on to Concord to see the museum and other sites there. 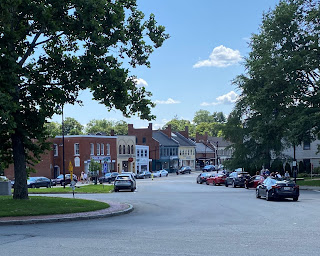 Concord is quite a swell place now. You’d have to search pretty darned far and wide to find a yeoman farmer. It’s more of a yeoman hedge fund guy sort of place. You couldn’t swing a cat without hitting a Range Rover sporting a Nantucket decal. 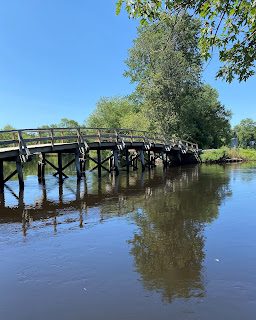 Daniel Chester French’s Minute Man sculpture and the North Bridge were the place to be—I had to drive around the parking lot twice in order to find a place to park. 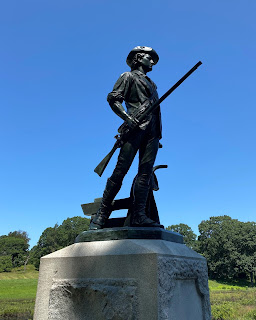 The Minute Man was life sized—so smaller than I imagined him to be. Musket in hand, he’s leaving his plow in the field for his appointment with destiny. Or as Emerson put it:
By the rude bridge that arched the flood,
Their flag to April’s breeze unfurled,
Here once the embattled farmers stood
And fired the shot heard round the world.

OK, it does kind of take my breath away.

Then my phone rang and my history geek reverie ended.

Which was a good thing since I didn’t have time to waste at the rude bridge since I had a noon reservation for the nearby Walter Gropius House in Lincoln. 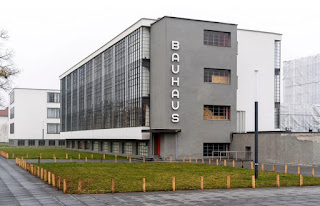 For those of you who might have slept through a semester of architectural history class, Walter Gropius founded the Bauhaus, the German design school, in 1919. The Nazi party thought it “degenerate” and so it closed in 1933. 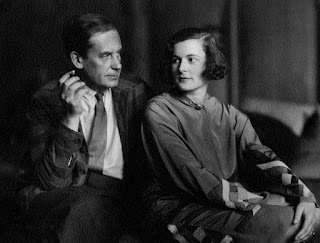 Gropius, whose wife Ilse was Jewish, emigrated to America in 1937 and took a teaching job at the Harvard Graduate School of Design. A wealthy patron, Helen Storrow, provided the capital and land on which the Gropiuses built their house. 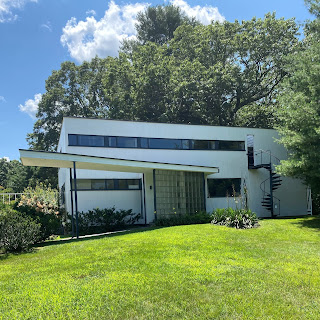 The house is now preserved as a museum by Historic New England, formerly known as the Society for the Preservation of New England Antiquities. 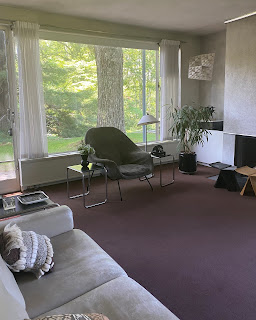 The house doesn’t quite look as if the Gropius family just left, but almost. There are plenty of knickknacks and personal effects of the family are here and there. With only four of us on the tour, we certainly got to see everything we wanted too. 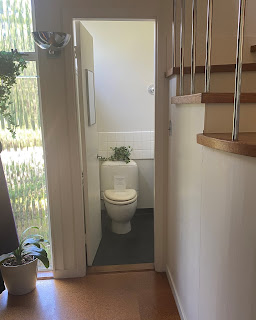 I think there was even a chance to poop in Walter Gropius’ john. You don’t get that now every day, do you? 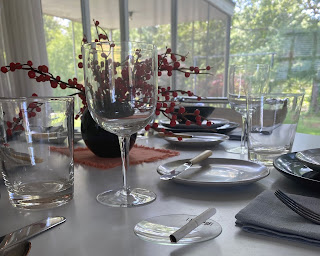 After the john, my favorite part might have been the dining room. The round table could accommodate up to six, and Gropius installed the lighting so that a spot in the ceiling shone on the table top and nothing more than the tabletop. It sounded a bit like the Blair Witch Project to me. There was an ashtray on the table with a half smoked Benson & Hedges cigarette—my mother’s brand—in it. 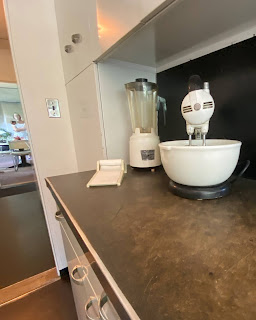 The kitchen was super up to date for 1939, with metal cabinets and linoleum counters, just like in my grandparents’ house. Mrs. Gropius didn’t learn how to cook until her housekeeper took a higher paying job at a munitions plant during WWII. The docent said that one of her friends had to show her how to make tea. 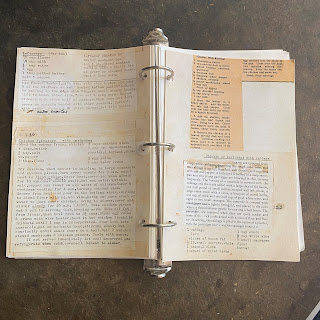 There was a cookbook on the counter open to this recipe for something called Leftovers for Two
1 cup flower (sic)
¼ cup milk
¼ cup water
1 egg
1 tbsp melted butter
Salt/pepper
Leftover chicken or turkey meat, cut up. Add ¼ lb sliced sauteed mushrooms, combined with a little bit of gravy or cream sauce. Heat and keep warm.

Mix flower (Wondra) milk etc. with wire beater and pour ½ of mixture on a well heated Teflon pan (10”). Check by pulling up the edge with fingers until nicely browned. Lift to brown other side. Take out and keep warm. Repeat process with other half of mixture. When done put leftovers on pancake and cover with other pancake.

Sprinkle with grated Parmesan or Swiss cheese. Dot with butter and put under broiler.

After a dinner of Leftovers for Two I have no doubt that Mr. Gropius wished that his wife would get a job in a munitions factory as well. 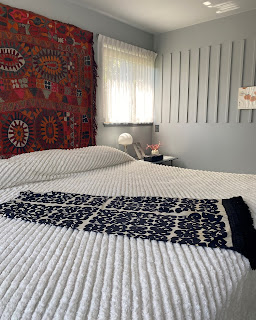 In the master bedroom, one of Mrs. Gropius' Marimekko dresses--with fringed hem--was laid out for her. BTW, Diana Vreeland loved fringe.

As she showed us around the master suite, the docent told us that Mrs. G was a bit of a fashion plate and was known to wear a skein of yarn on her head and call it a hat. 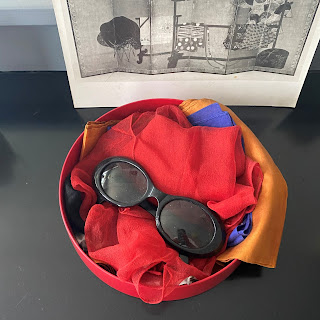 I'm sure that was about as attractive as Leftovers for Two was tasty. 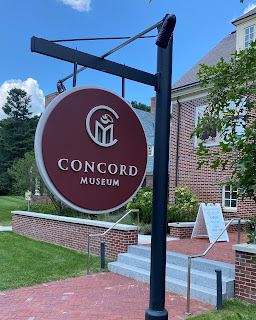 After Gropius I went back to Concord and did the jiffy tour of the Concord Museum. 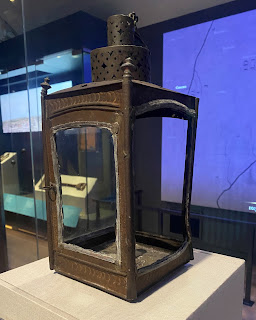 The museum has lots of 18th C artifacts including one of the lanterns hung in the steeple of Old North Church to signal to Paul Revere that the British were going to Lexington and Concord "by sea".

I wished that I had more time to explore the area, but I had what promised to be a fun wedding to go to.