Keeping Up with the Joneses

After I went to my second or third viewing in Altoona, Pennsylvania, it occurred to me that someone should do an architectural or photographic survey of the city's funeral homes. Funeral homes are to Altoona as roadside vegetable markets are to southern New Jersey. They're practically ubiquitous yet still manage to be visually interesting. No two seem to be alike, and they can be a well maintained oasis in a neighborhood of dilapidated eyesores in the making. 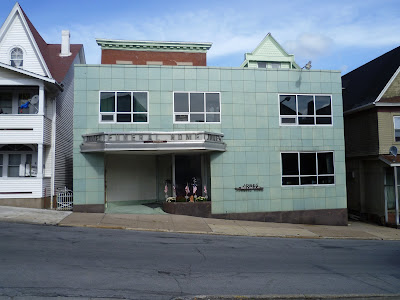 Although I've driven through Altoona--and yes, I mean through downtown Altoona, not whizzing by on the Bud Shuster ("Pork: Not Just The Other White Meat") Highway--a zillion times, I never noticed the Jones Funeral Home until I went to a viewing there. It's on 13th Avenue, quite near the Cathedral of the Blessed Sacrament. My friend's sister couldn't have picked a better place in which to be "laid out".

The building is a celadon green Art Deco ceramic tile box on a pink granite base. It's been grafted none too delicately onto the front of a 19th commercial building and what looks to be an old house. The building's large recessed entrance is on the left side of facade and is shielded by an aluminum marquee. When it was built, it must have been the height of style. A bunch of small American flags had been stuck in the planter box by the entrance. Veterans are welcome.

The marquee seems fit for a movie theatre, with the words Jones Funeral Home spelled out in sans serif letters in a backlit frieze. The building looks as if it's ready to host a funeral for Fred Astaire and Ginger Rogers. That is, if they lived, no make that died, in Altoona. 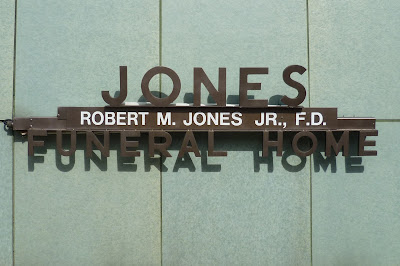 The small metal sign bolted to the front of the building casts a handsome shadow on a sunny day.

I recall that the interior featured a couple of large reception rooms that needed to be redecorated about 30 years ago. That's mostly a faint memory, since most of that sector is filled with a file of my friend telling me (and showing me) that she didn't like how they did her sister's hair. (It never looked like that!) Her sister, of course, was the deceased, the star of that particular matinee. My friend's nephew and I talked about the era when the dearly departed was "laid out" in the family living room, and how that gave to meaning to inviting friends over for a cold one. Even at a viewing, I find myself so amusing.

The Jones Funeral Home must also occupy the skanky house next door to the funeral home. For there, right on the front porch, is a gaggle of No Parking Funeral signs that have clearly seen better days. While people may be jonesing to get into the Jones, reserving parking spots with 'Funeral No Parking' signs isn't something the home needs to do on a weekday morning. I was the only car parked on the street. That's the way Altoona is: there used to be a lot more there there than there is now. 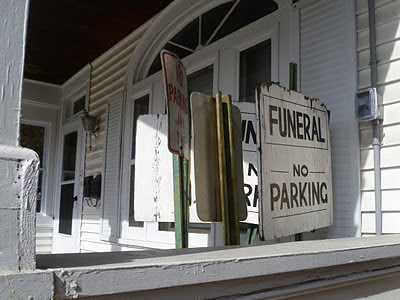