Rick, a middle-aged hipster doofus wannabe, checking out at Lowe's, at the end of an expedition to buy a new garbage can, toilet seat, and shower curtain. And maybe some other things, but he left the list in the truck. Or maybe it’s back at the house. Or in the pocket of his other jacket. He’s just not sure.
Pat, a middle-aged-and-then-some cashier, whose deceptively cheerful visage and bad haircut disguise the fact that she’s less than happy about the holidays.
Cashier Pat: I have to look in your can. It’s one of the rules. You wouldn’t believe what people try to do here.
Shopper Rick:  Well I’ll be. Have at it. It’s empty.
Cashier Pat looks inside the garbage can and seems satisfied that it’s not filled with almost shoplifted bidet parts. 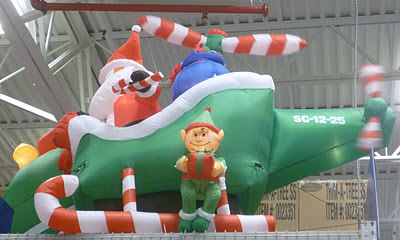 SR: I can’t believe you have Christmas things on display. It’s October.
CP: (Expressing severe dismay) I know, what about that?! 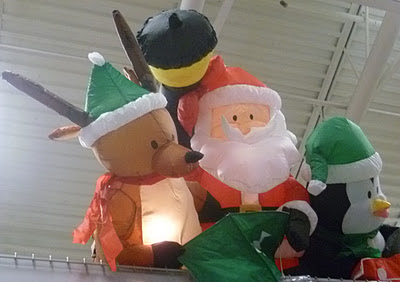 SR: How long have they been out?
CP: Since the beginning of the month. It’s just horrible. 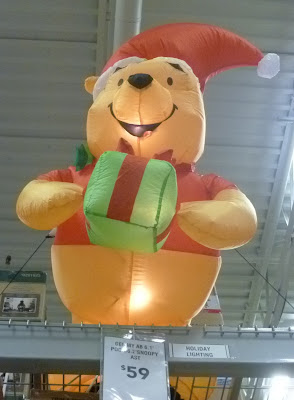 SR: It’s not even Halloween, I haven’t festooned my house with orange lights or anything.
CP: People don’t give out candy bars any more. I hate it.
SR: I know, I know. I have a harder time sticking razorblades in things!
Cashier Pat chortles with way too much evil enthusiasm. Actually Shopper Rick wonders if he's the only guy who still hands out candy bars. What’s up with that?  He toys with the idea of telling her he saw a Craigslist posting of someone looking for an old crone to live in a gingerbread house in the forest near Cape May. Uncharacteristically, he keeps his trap shut. SR: So what about the inflatable Santa in the outhouse, do you sell many of those? I thought that the holidays were supposed to smell like Christmas trees and cinnamon and stuff like that. Guess I was wrong! 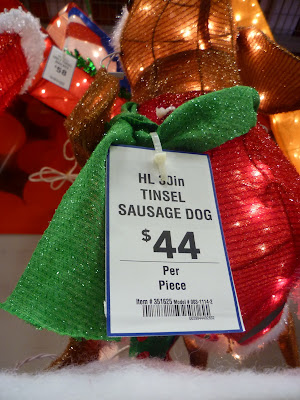 SR: Did you see the light up wire dachshund? It’s called a “sausage dog”. No Rick did not suggestively tug at his crotch as he said that. But he did think about it. Long and hard. I don’t think of a dachshund as a symbol of Christmas.
CP: (Lighting up like the Rockefeller Center Christmas tree) Oh wow, that’s great!! I should get my sister one, she’s really into flamingos!