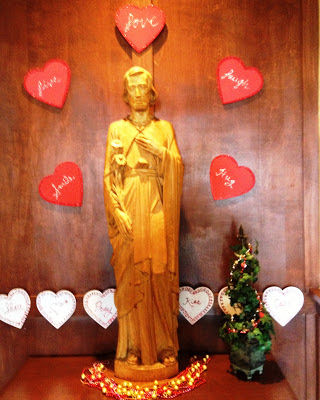 Valentine’s Day was a few days ago and once again I had the chance to jump into the action as a floral assistant. I think it was my 13th year of donning my red sweater and bringing my own special kind of L-U-V to Happy Valley. Valentine's Day gives me a whole new perspective on "saying it with flowers".

How did I get to be a floral assistant? The brother of my co-worker Carol is a retail florist in State College. Carol, the closest thing I have to a work wife, is in charge of recruiting the legion of day laborers necessary to make 400-odd deliveries on Cupid’s Special Day. So for one day a year, the flower shoppe has a mix of folks taking a break from real life and retirees spending the day delivering flowers.

We work in teams of two: a driver and a runner. Ever since the parking garage of the Mayflower Hotel in Washington DC jumped out in front of my van during another floral adventure, I play the role of the guy who runs the flowers from the van to the lucky recipient. I used to work with my friend Bruce, but he drives too much like a law abiding citizen of a certain age plus 30 years. Now I’m paired with my sister. Carolyn is a NASCAR fan who can drive the van, put on makeup, participate in a conference call, drink coffee, and share her feelings out the window with some yahoo in the other lane…all at the same time. I have a difficult enough time participating in a conference call from the safe confines of my desk, so her multitasking is all the more remarkable in my book. Oh, and a swanky Washington hotel parking garage has never jumped out in front of her car. Can't forget that! 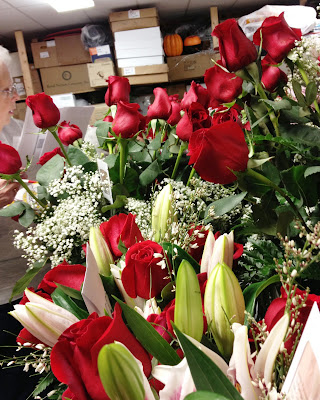 When Carolyn and I reported for duty at 8:00 a.m., there were about a kabillion flowers to deliver. Or so it seems when we walked into the floral shoppe work room. While Allen, the florist, seems to know where everything is, to me the studio looks like the set of The Really, Really, Really Gay Hoarders of Atlanta on the Logo network. There are boxes, boxes, and more boxes of candelabra, vases, candles, floral supplies, and whatnot, especially whatnot. And there are tables and tables of flowers ready to go out the door, too. 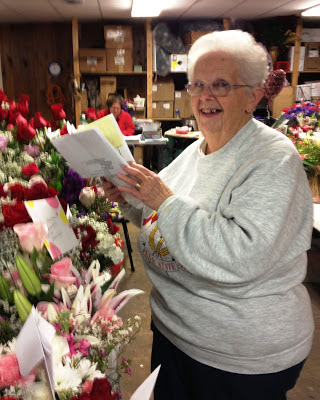 The organization of the deliveries—sending which arrangement out in what van— is done by Carol and her mother. Carol is a bit of an alpha male who comes by it honestly since her mother is one too. So occasionally it’s like Mrs. Crawley vs. the Dowager Countess of Grantham on Downton Abbey as Carol and her mother work together to get the deliveries organized. However, in the end, they're both smiling and the flowers (and accompanying paperwork) are on their way out the door.

Carolyn and I made our first delivery of the day was at 8:37 at Easterly Parkway School. My sister practically had to trade paint (that’s NASCAR lingo) in the parking area with moms in Volvos dropping junior off at school. Holy crap, don’t kids walk to school any longer? Or did that habit end with smoking in the teacher’s lounge? 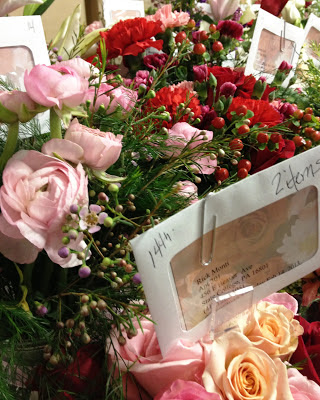 When we went to Lemont Elementary School, our second stop, the school secretary looked longingly my bouquet and said “Are you sure there aren’t flowers on the truck for Heidi Davidson?” I told her that I would gladly divert some of our delivery to Koch Funeral Home if she would like to cover the ditto machine with the late Effie Seitenbacher’s family spray. We both had a chuckle and I decided (under the influence of ditto fluid, I think) that she was the kind of woman I would send flowers to if I were the kind of guy to send flowers to women, and she were more attractive, had a better figure, higher SAT scores, and of course, most importantly, wasn’t wearing a Valentine’s Day holiday sweater and really bad shoes.

Later in the morning we stopped at a Sheetz convenience store. The chain’s schtick is that they spell plural nouns with a Z whenever they can. I thought I was pretty funny when I said to the person behind the cash register, “Flowers with a Z for Janice”. The clerk obviously did not know a bon mot when he heard one and so I got a curt “She’s not here” in addition to the look that State College postal clerks give to clueless non-English speaking Asian graduate students trying to mail boxes to places no one can spell. He was not about to think outside the bagelz, so I had to say, “Well, can you give them to her when she gets here?” As soon as he grunted “Yeah”, I was out of there before I was tempted by the large display of meat snackz and other blood pressure elevating industrial food delightz. As Carolyn and I pulled out of the lot, there was a pack of Sheetz employees huddled around the propane tanks smoking. If there is anything l like better than a pod of convenience store clerks smoking by the door to the store, it’s a pod of convenience store clerks smoking next to the propane tank display by the door to the store.

A short time later we were at some social service agency I’d never heard of. I couldn’t really figure out what its mission was other than to hire women, encourage them to dress badly, get horrible haircuts and all manner of facial piercings. “I have flowers for so- and so” I chirped. “They’re not for me so don’t you worry” griped the unattractive pear-shaped woman, a symphony in brown polyester. Instead of worrying about who was getting the flowers, I worried about how a guy could make out with a woman with spikey things sticking out of her face without poking his eye out.

“Her man is so predictable” confided another receptionist as she accepted a flower arrangement for a coworker. I almost sighed and said “I know” and while giving her a look that she might not understand. 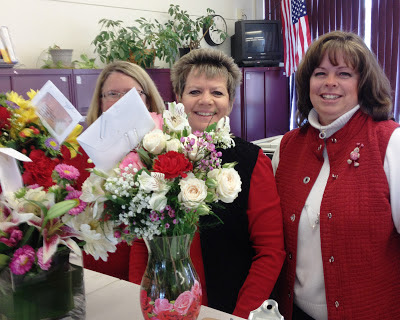 I got to go to my old school, too. They’ve replaced the standard principal's office with something that looks like a cube farm, but festive holiday duds are still the norm with the women who run State High.

One of my favorite deliveries was where I said to the cute receptionist, ”I have flowers for Jen. And I have to apologize. There are only eleven roses. I broke one getting it out of the van.” The receptionist confided in me, "Oh don’t worry, she’ll never know. And besides she’s weird. Getting eleven will make her like ‘em even more. Would you like a red velvet cookie?” It was the only tip of the day that Carolyn and I got. 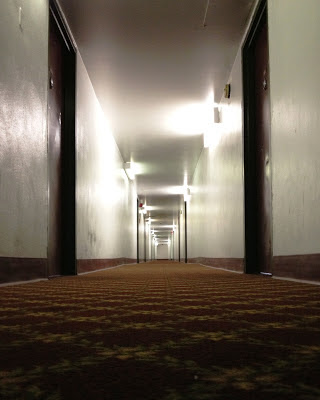 After a finishing with the offices, we started delivering to residential State College. We did some Soviet style apartment blocks in downtown and single family houses in the part of Ferguson Township that looks just like New Jersey. Places that were fields when Carolyn and I were kids are now just another slice of the United States of Generica.

There wasn’t as much loud music in apartment buildings as there used to be. I suppose the invention of ear buds put the kibosh to that. But the young women (and they were all young women) receiving flowers uniformly live in squalor. Had they ever picked anything up off the floor, washed any dishes, or put any effort at all into their surroundings? No. None. Zip. Nada. 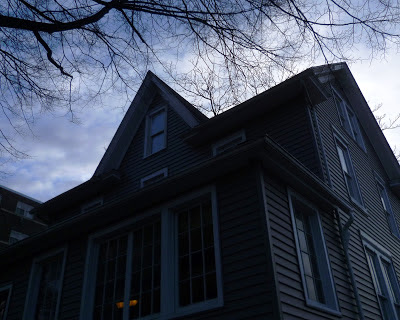 Seventy one arrangements after we started, we were at the the last stop of the day, a particularly grim student rental. It’s one of the skankier places in downtown State College—I walk by it on my way to Starbucks in the mornings. It’s an old, two-story house, and made out of that fake brick fiberboard that’s one step above tar paper--now beautified with plastic siding, of course. I walked onto the enclosed porch and it was a still life of empty beer cans and dead collapsible umbrellas, as if it were Mary Poppins’ last stop on her way to the Betty Ford Clinic. I knocked on the door and in a nanosecond it was opened by a co-ed wearing black leggings and a tight THON tee shirt. Were I the type to get all hot and bothered by a co-ed in a black leggings and a tight THON tee shirt I would have, well, gotten all hot and bothered. But as it was, I remained cold and unmoved, and instead of checking her out, I checked out the front room of the house, which as far as I could tell was decorated by the same person who did the front porch. “I have flowers for Brenda,” I said. Without stepping away from the door in the slightest , the coed turned her head, and in her best hog callin’ in the Ozarks voice yelled to the back of her apartment, “BRENDA!!!”. What a gift to my hearing that was!

I was cold, I was tired, and I’d spilled water from 71 vases of flowers on my trousers. Carolyn was ready to head out to dinner with high school chums. We were both glad the day was all over, including the shouting.
Posted by Rick Bryant at 4:01 PM No comments: