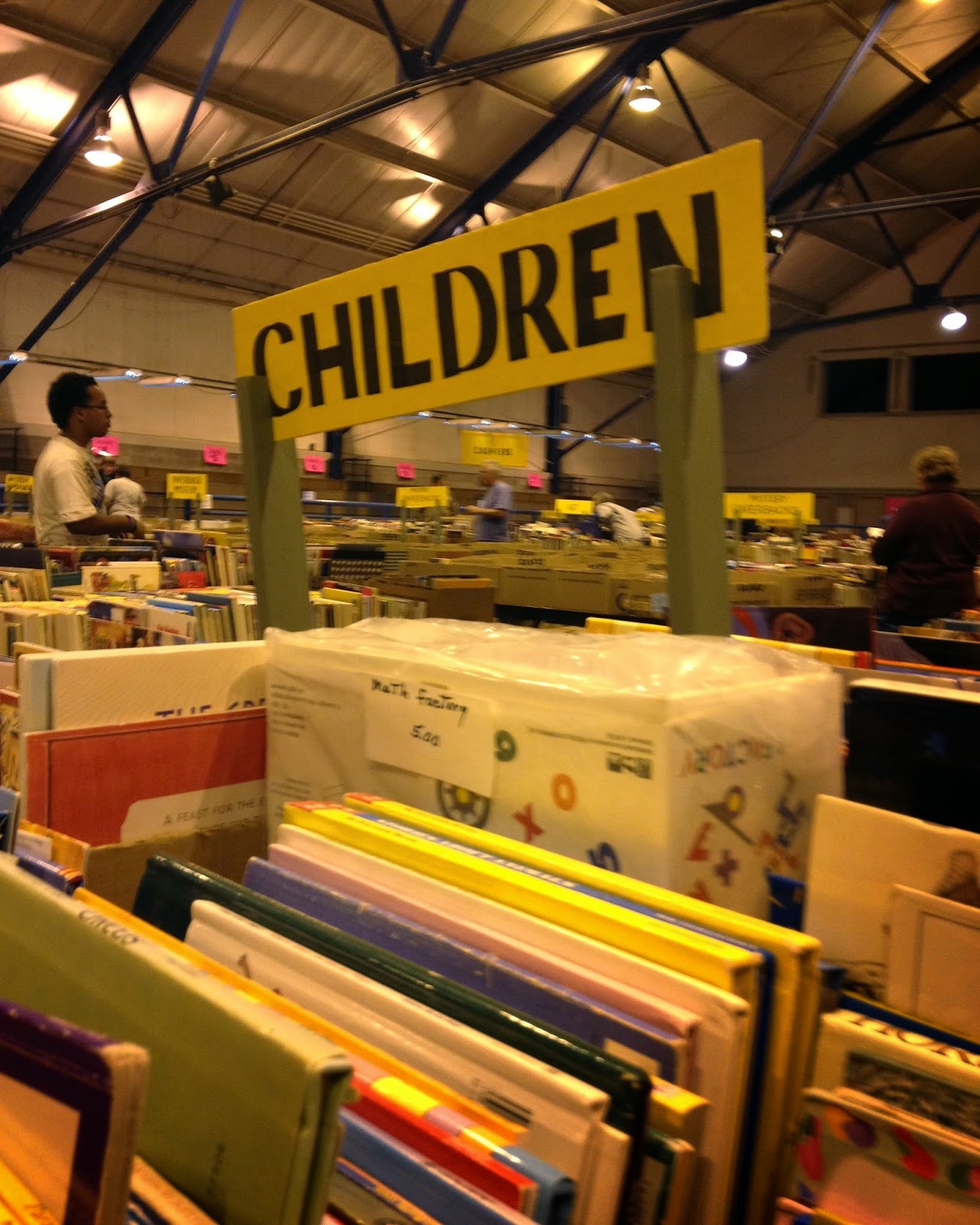 This weekend is the State College branch of the American Association of University Women’s annual used book sale. The local chapter of AAUW (American Association of University Women) and its fundraising book sale are local institutions. The AAUW chapter was formed shortly after there were two women of a certain age and then some living in State College. Used book sales, on the other hand, have been going on ever since people started recycling old cuneiform tablets that were cluttering spare rooms in the Fertile Crescent eons ago. One can only have only so many copies of bodice rippers from Mesopotamia's answer to Jackie Collins lying about.

I’m not much of a customer at the book sale, but I do my part by helping to load the inventory into Penn State’s Snider Ag Arena. This project requires five box trucks, perhaps 45 volunteers, a supervisory corps of AAUW folks and four or five hours. Oh, and we have to wear an official uniform: a name tag. It's not every day that I get to wear an Avery label that says and I quote: "Unload Trucks Rick Bryant". Before heading over to the Ag Arena, I’ve found that it’s good to lay in supplies for the after party: beer and Ibuprofen. I’m not as young as I used to be! 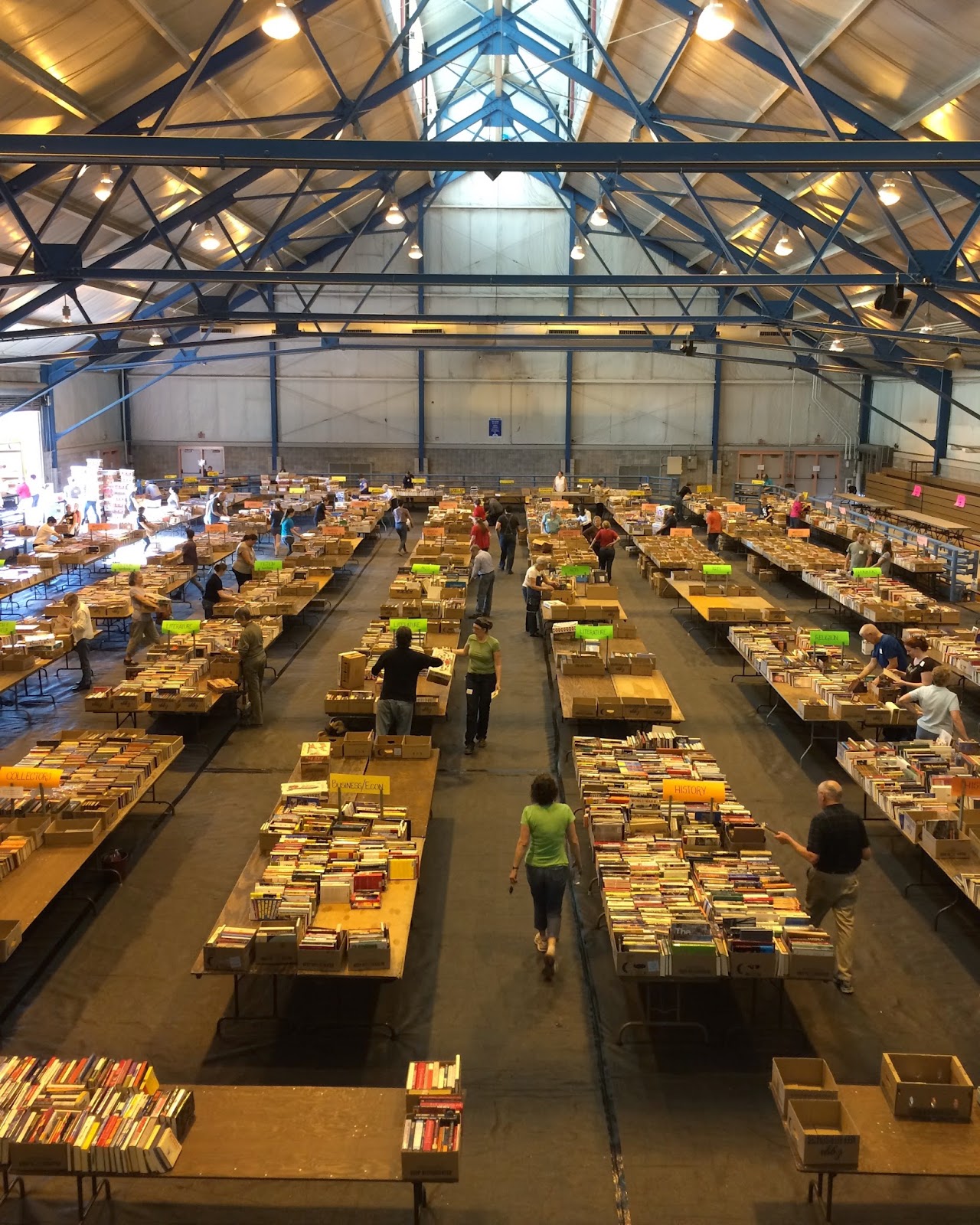 This year I enticed my new pastor to join in the fun. I told him that the booksale was a State College institution and that it would be a good way to see what it was like first hand.  He’s a good sport and said, sure, he’d help even though he could only be there for ninety minutes and not the full five hour tote-a-thon. I didn’t speak to him as he was leaving, but I’m interested to hear where he thinks the event stands on the fun scale compared to say, eating mayo-laced potato salad that’s been unrefrigerated too long at a church picnic in August.

My friend Rosa also pitched in too. You'd never know it that she'd just run a marathon last weekend. Seriously. Yes, the kind that's 26.2 miles. And has hills. And she set a personal record! Her resting heart rate must be about 4 beats per minute. Rosa didn't complain once about the book toting or her co-workers or even the leaden hoagie we had at our dinner break. I think she actually enjoyed herself.

This year there were fewer high school kids toting books than usual for me to gripe about. The youngsters who showed up were pretty good workers, especially the middle school kid who wore his very smart Boy Scout uniform shirt. Robert Baden-Powell would have been quite proud of the lad, who dove right into the fray while the more fashionably dressed helpers took frequent opportunities to stand around and flog their yo-yos.

This year, the AAUW-ers only played light classical music during the load-in for thirty minutes—still enough time for me to mention to someone that it reminded me of the orchestra at Auschwitz.  After our taste of Viennese waltzes mit schlag, they moved the radio dial to greatest pop hits of the 80s, 90s, and so on station, tunes that my friend Blair called “songs you never wanted to hear again”. Except for Love Shack by the B-52s, he's gotta be ready to hear that again. 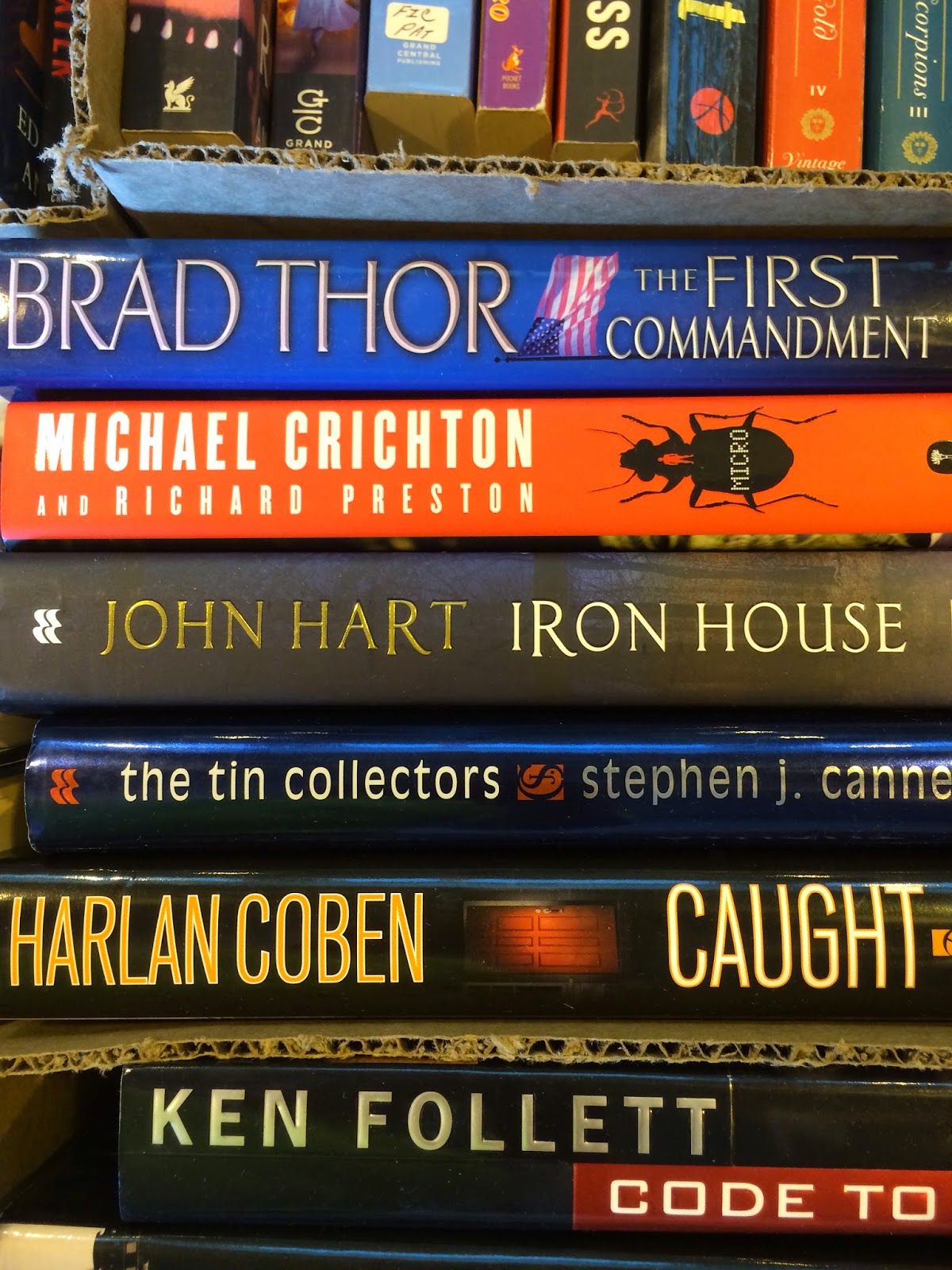 While the AAUW changed the music, it still seems to be sending some of the women who unpack the boxes of books to Continuing Ed for Prison Matrons at the Ann Smith Academy. While most of them are nice and some of them even fun to be around, there are the few who don’t smile, say thank you, and pretty much act as if you’ve just snuck across the Rio Grande with a leaf blower strapped to your back, hoping to stand around in a Wal Mart parking lot trying to get a job as a day laborer.

After a couple of hours of toting, there’s a short break for an al fresco meal of a soggy hoagie, piece of hand fruit, slightly burned cookies, and soft drinks. Interestingly enough, there are never any chips. Ever. In the almost ten years I’ve been toting books there have never been chips. If men were organizing this, there would be chips. If gay men were organizing the meal there would be some sort of free range, artisanal Maldon sea salt flecked heirloom veggie chips. But they still count as chips. I think it's fair to say that university women have an aversion to chips.

Even though there were more cartons than we usually move, before I grew accustomed to the heady scent of old books and body odor without benefit of Old Spice, we were finished. No doubt the diligent Boy Scout had something to do with it.

Finishing early meant that I had a little more time to shop. In addition to the nice name tag and the hoagie (remember, no chips!), the evening's big perk is about 20 minutes to shop. Volunteers are allowed to buy one tote bag or box of books. The books can be from any section of the sale except for the double-secret super-deluxe collectors room, which I've never actually been too. I'm assuming that it has first editions and old maps and a section of 8-trak tapes including the super-rare Liberace Live at the Valley Forge Music Fair. But that's just a guess.

Here are some of the great things you can buy at the sale this year: 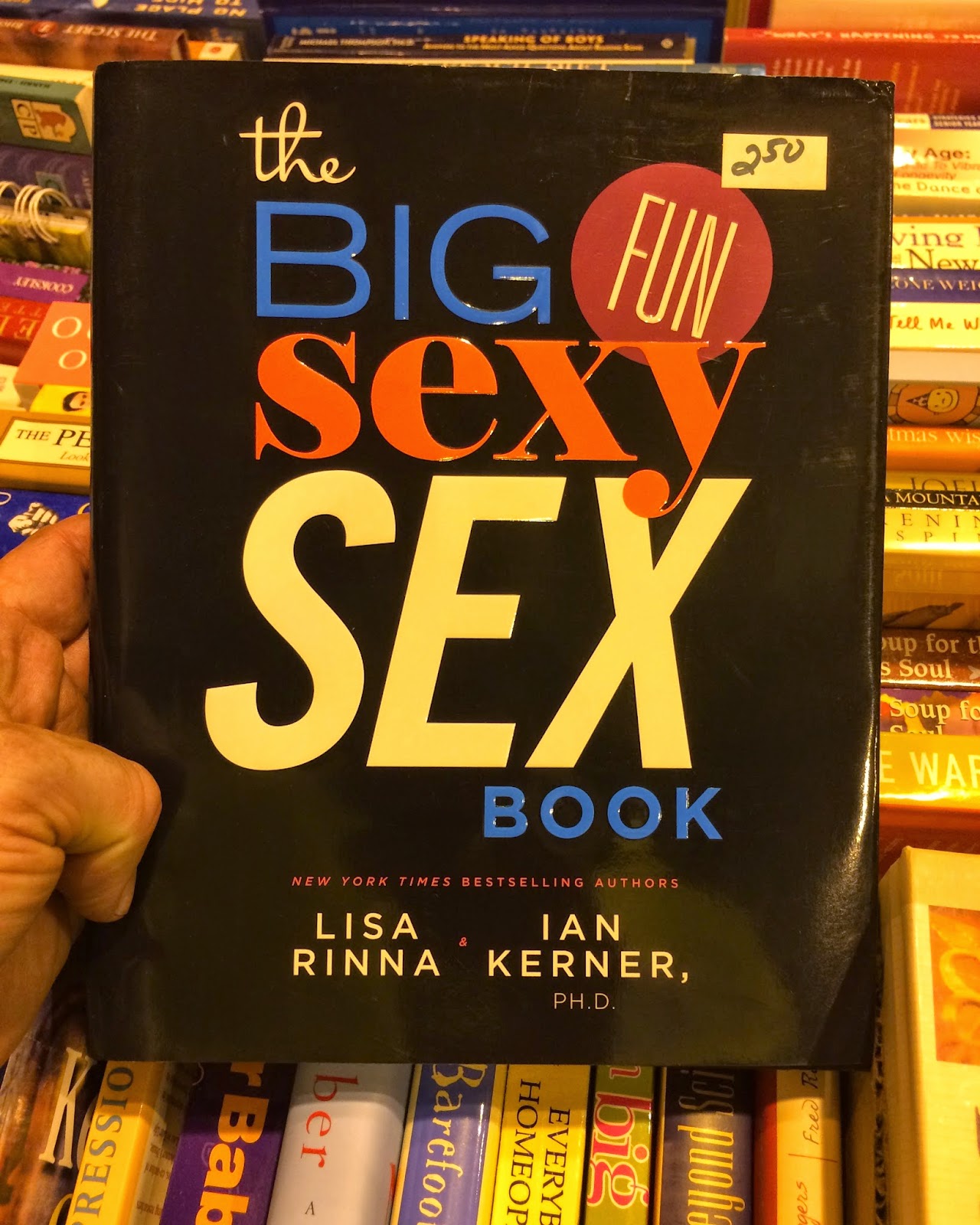 I thought this was going to be about sex for fat people. Then I noticed that one of the authors was Lisa Rinna, and the fattest things about her are her collagen plumped lips.  I like the price: $2.50. Reminds me of the punch line to that old joke:

Two-fifty. Same as in town. 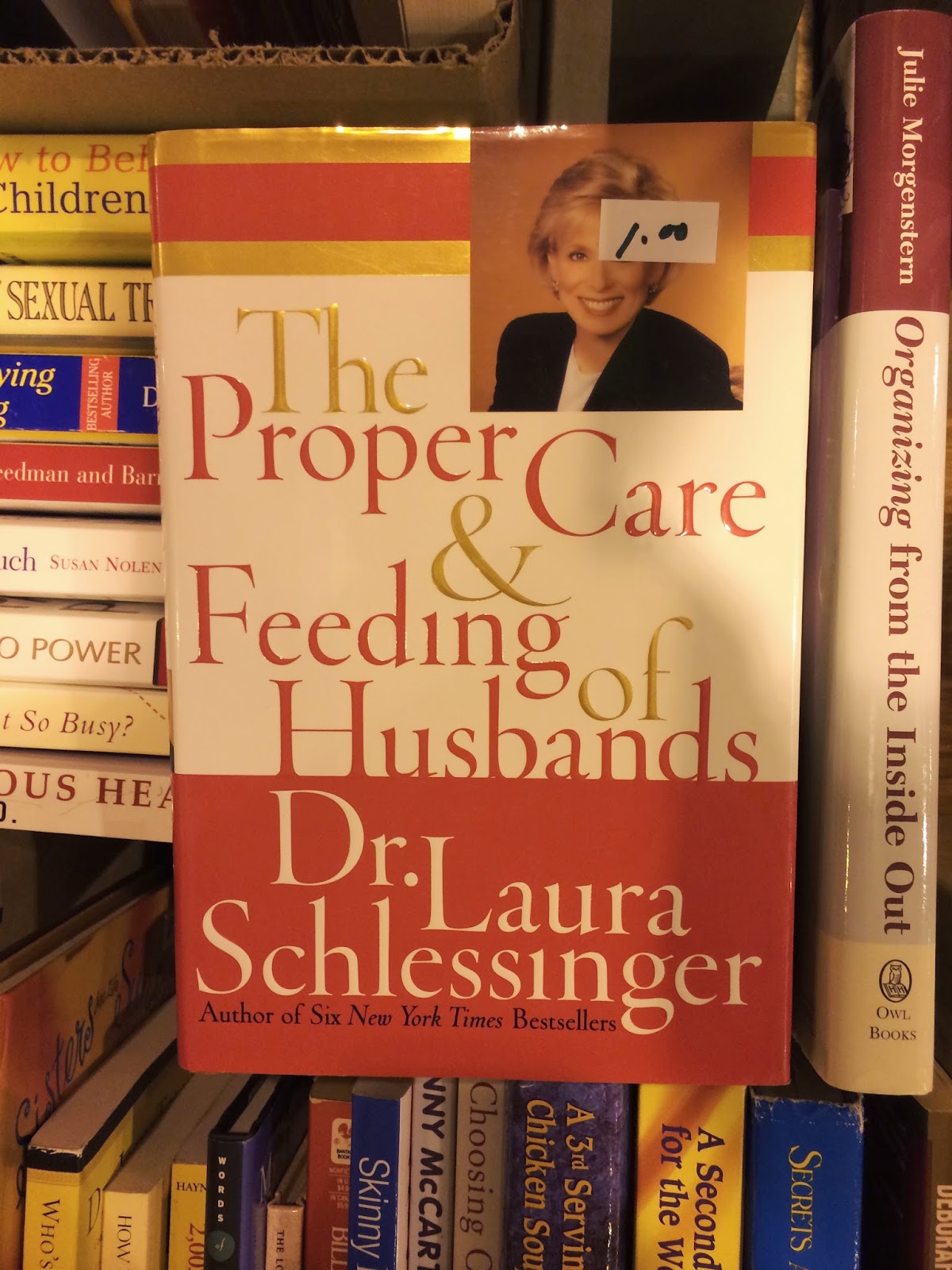 Yes, Dr. Laura telling you how to manage your husband is worth less than learning about sex from Lisa Rinna and her collagen plumped lips. 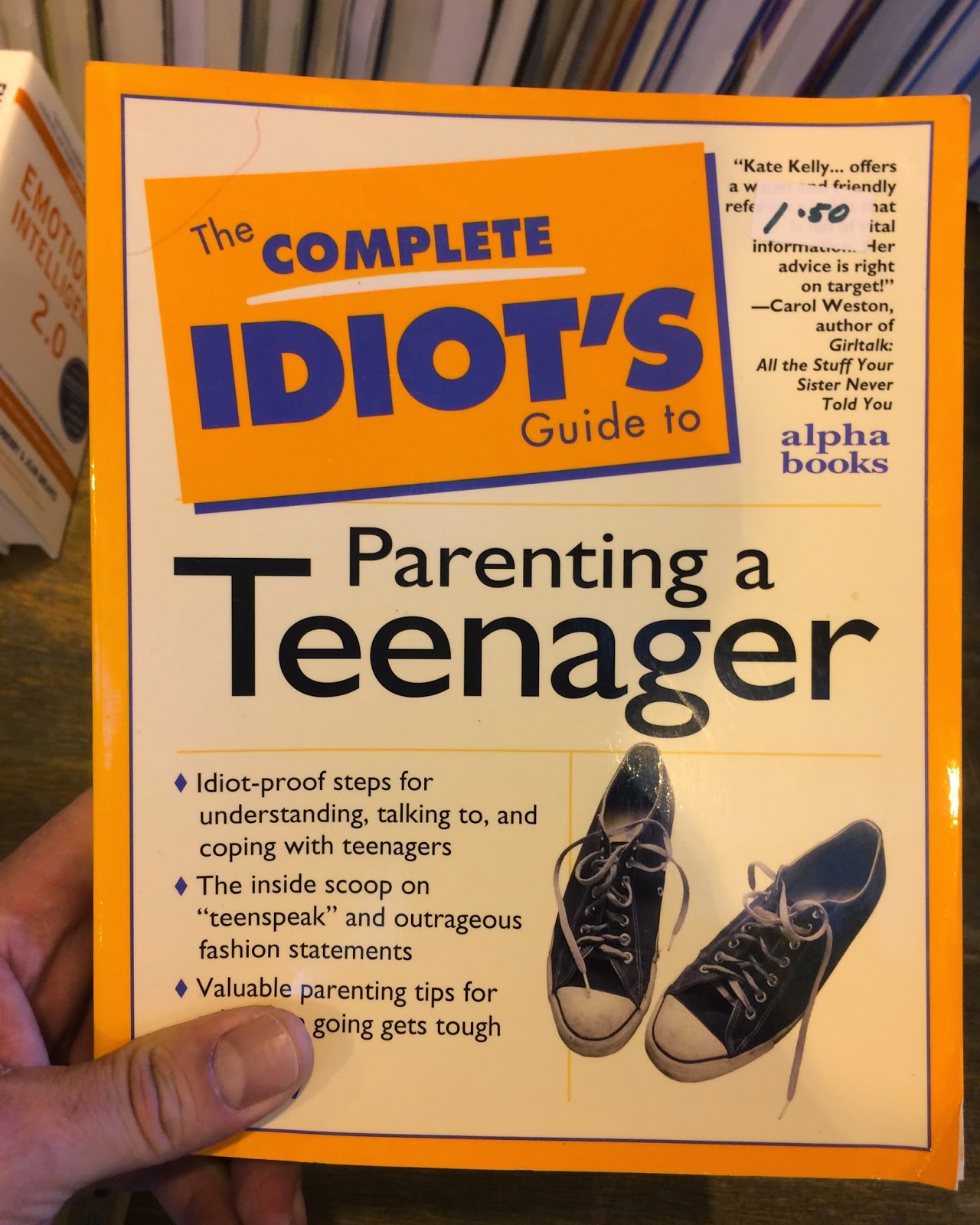 If you asked me, only a Complete Idiot would have a teenager in the first place. It won't come as a surprise to regular readers of the blog that there were no "outrageous fashion statements" in the Bryant household during any of our teen years. 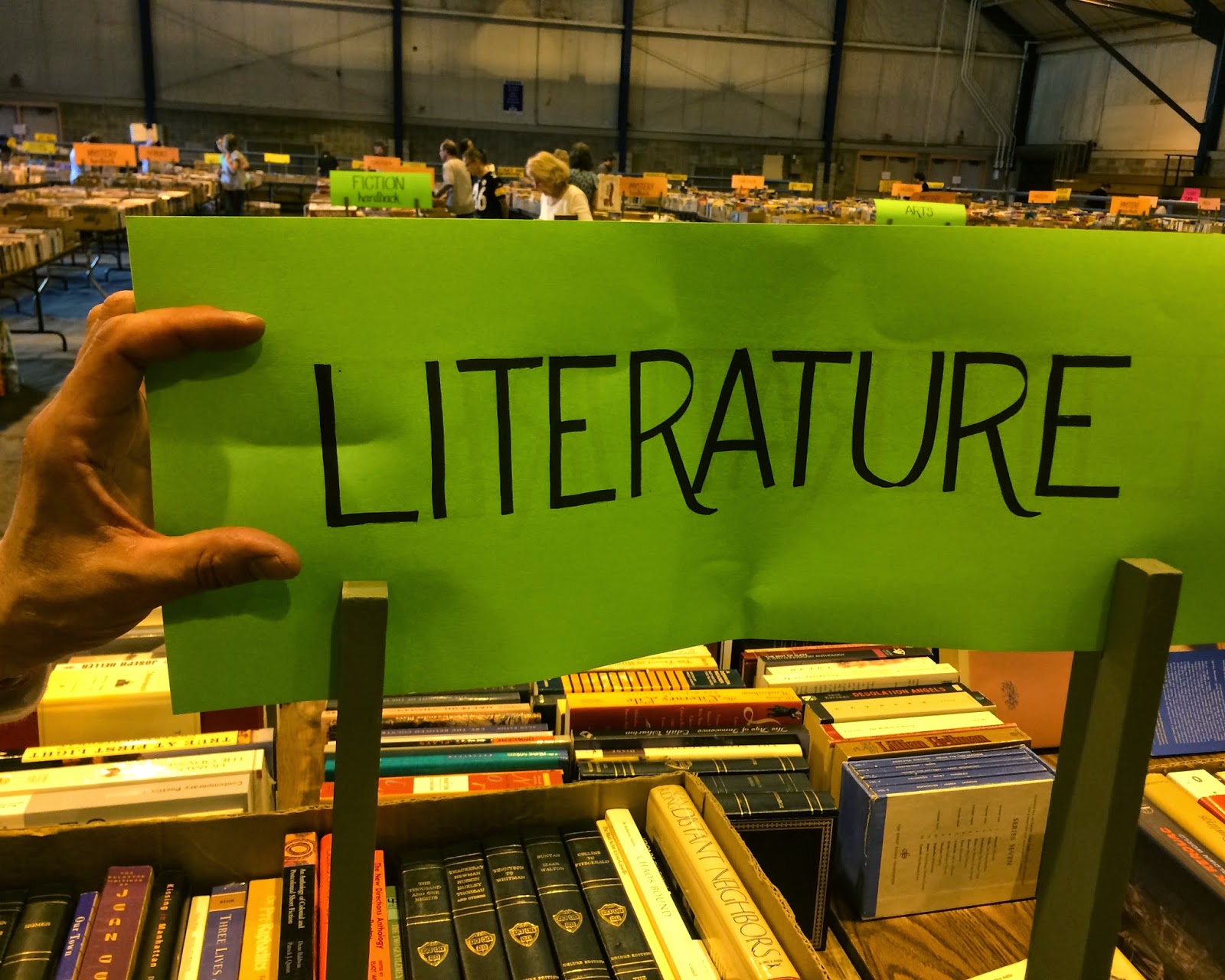 My homage to my favorite author, Christopher Buckley, whom I'm seeing at the Free Library of Philadelphia next week. He reviewed Sally Quinn's first novel, Regrets Only in Vanity Fair, calling the book "cliterature". Sally was was none too pleased. 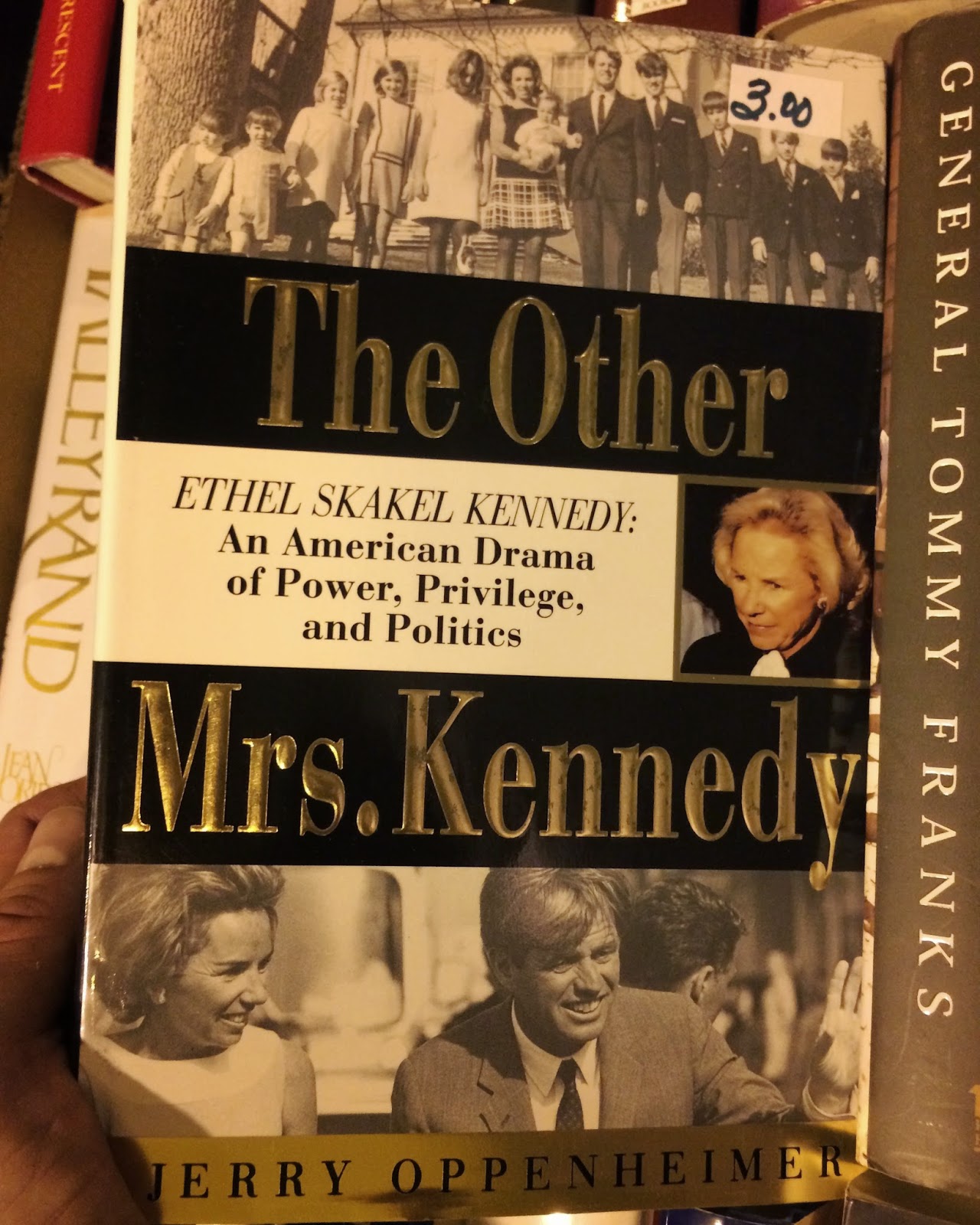 My college chum Peggy used to buy all the critical books about the Kennedys in hard cover just to make Kennedy matriarch Rose mad. Peggy probably had this one. Ethel was no box of chocolates. 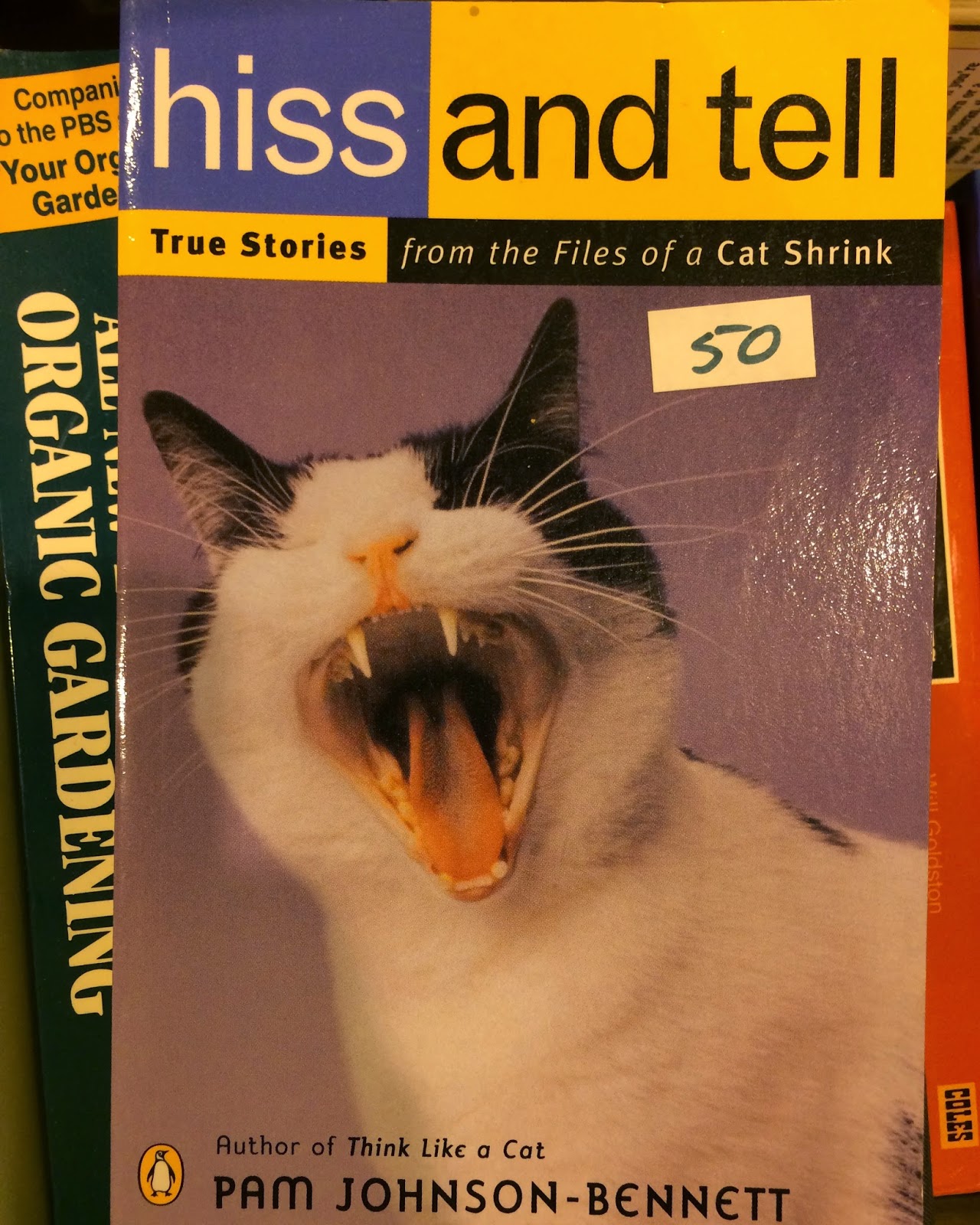 Something from the Cats Sucking the Breath Out of Babies section of the sale. 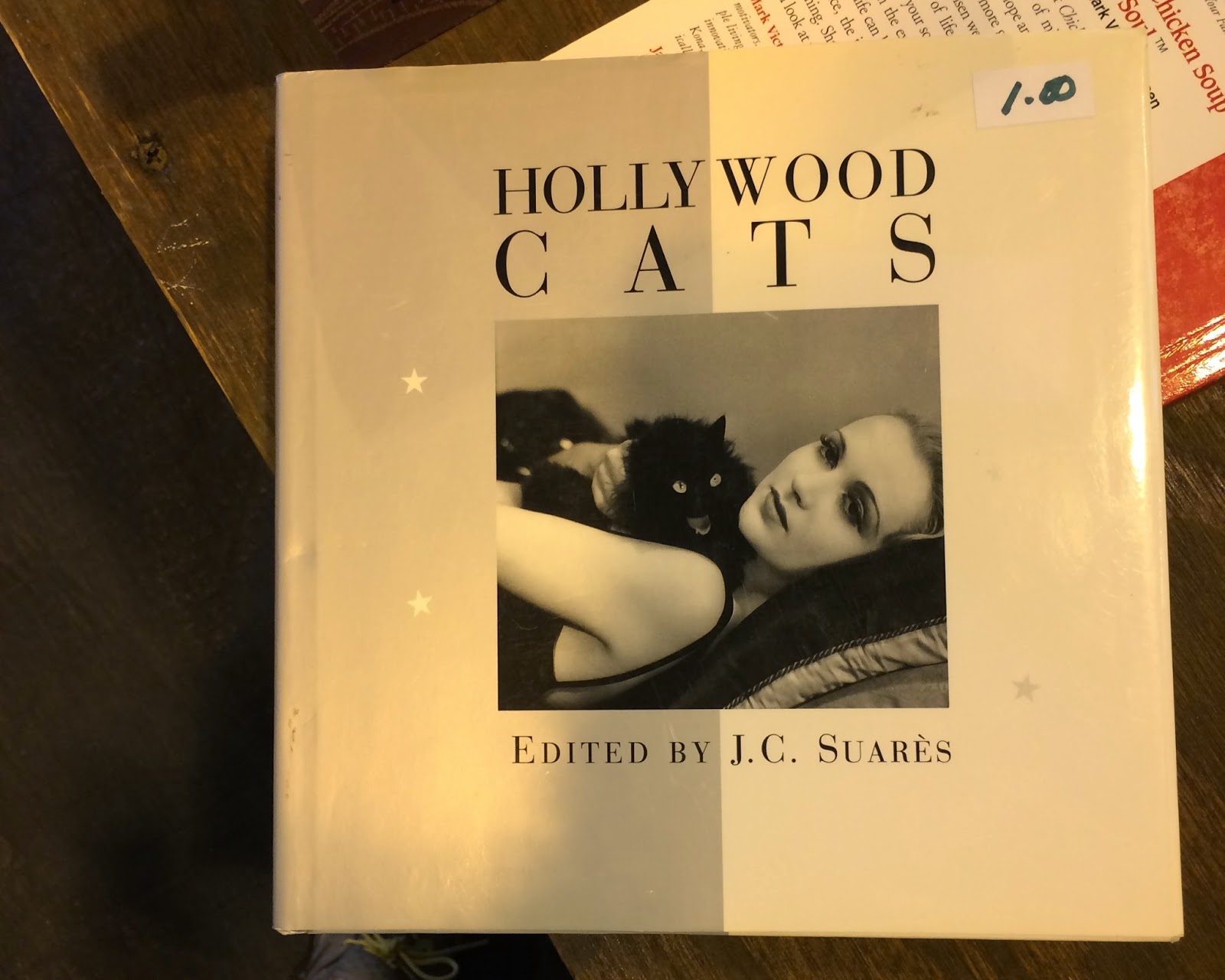 This reminded me of the rock band from Atlanta, Nashville Pussy. 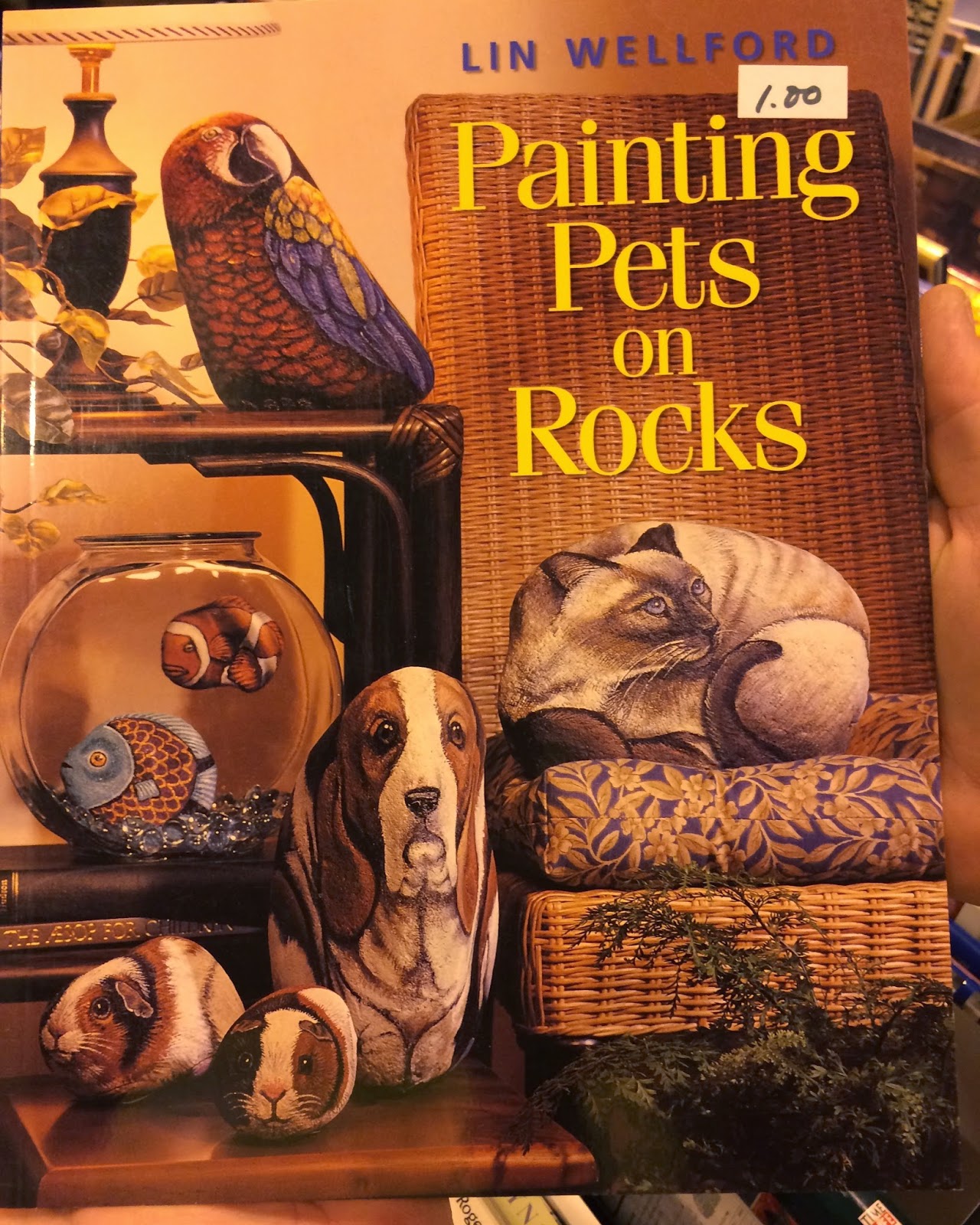 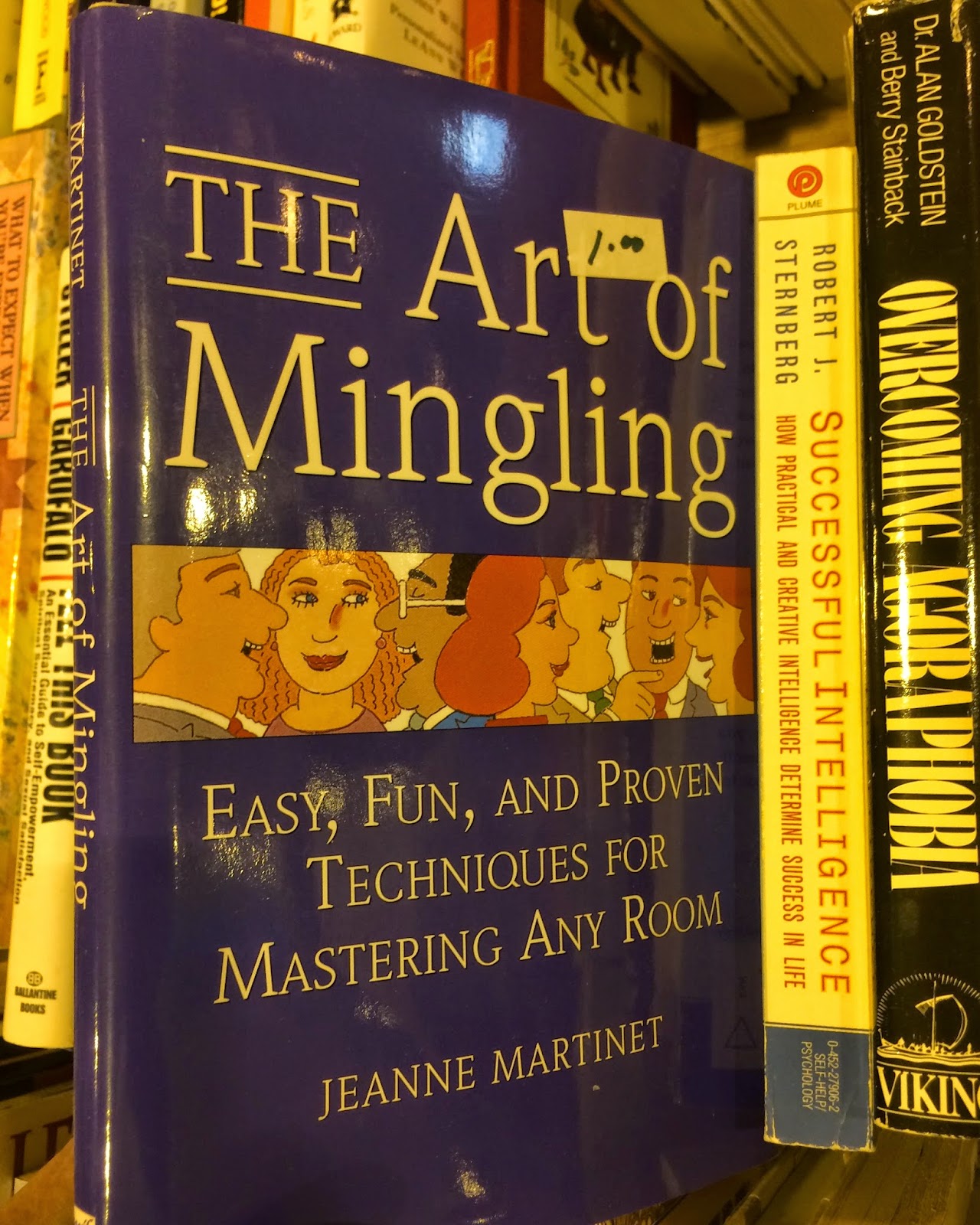 I don't think of martinets as big minglers. 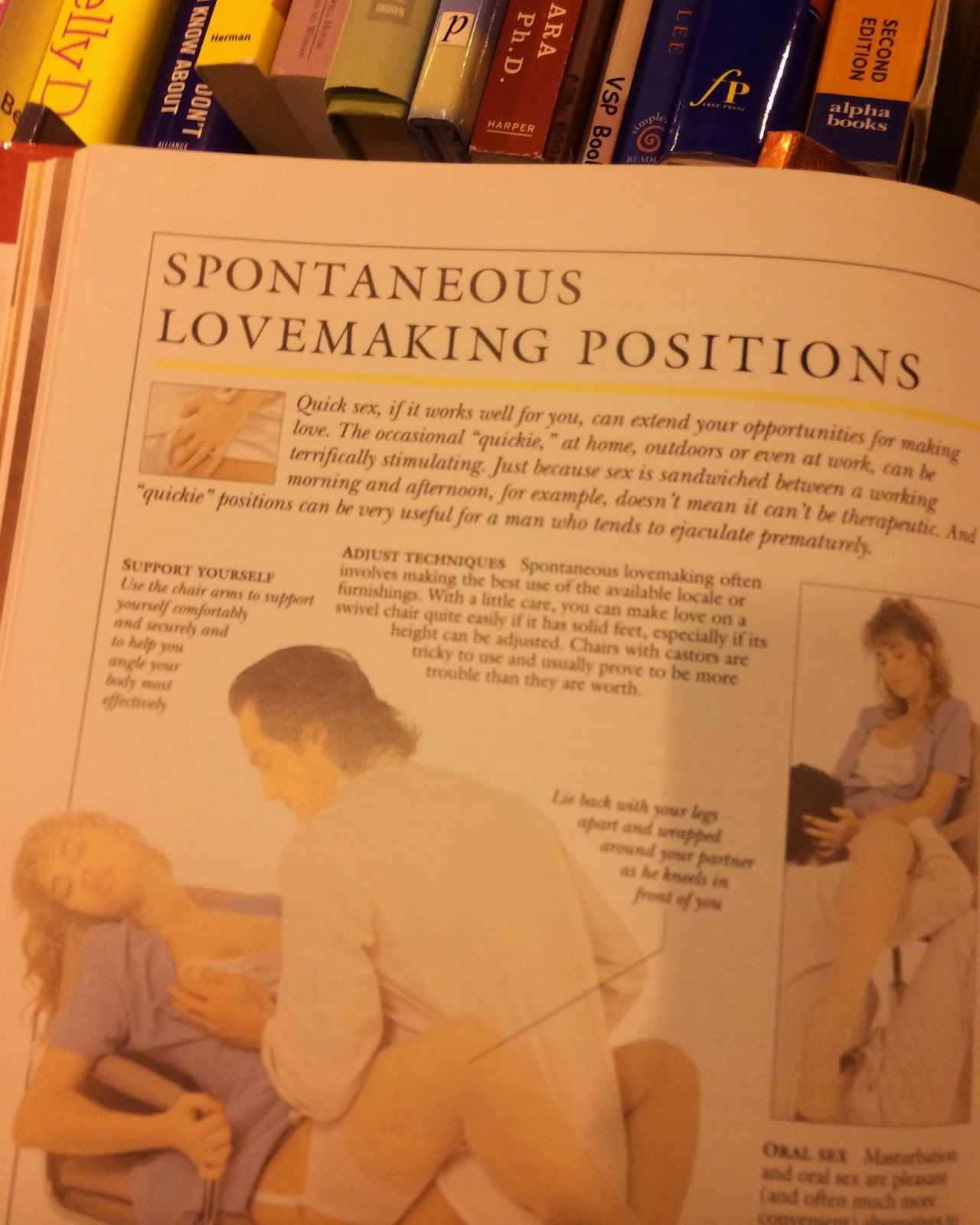 Lots of sex books this year. I've forgotten what this one was called. Love love love the illustrations though. I should ask my friend Anni if she knows who did them. So seriously, does the publisher of this number expect people to bone up (as it were) on "Spontaneous Lovemaking Positions" ? 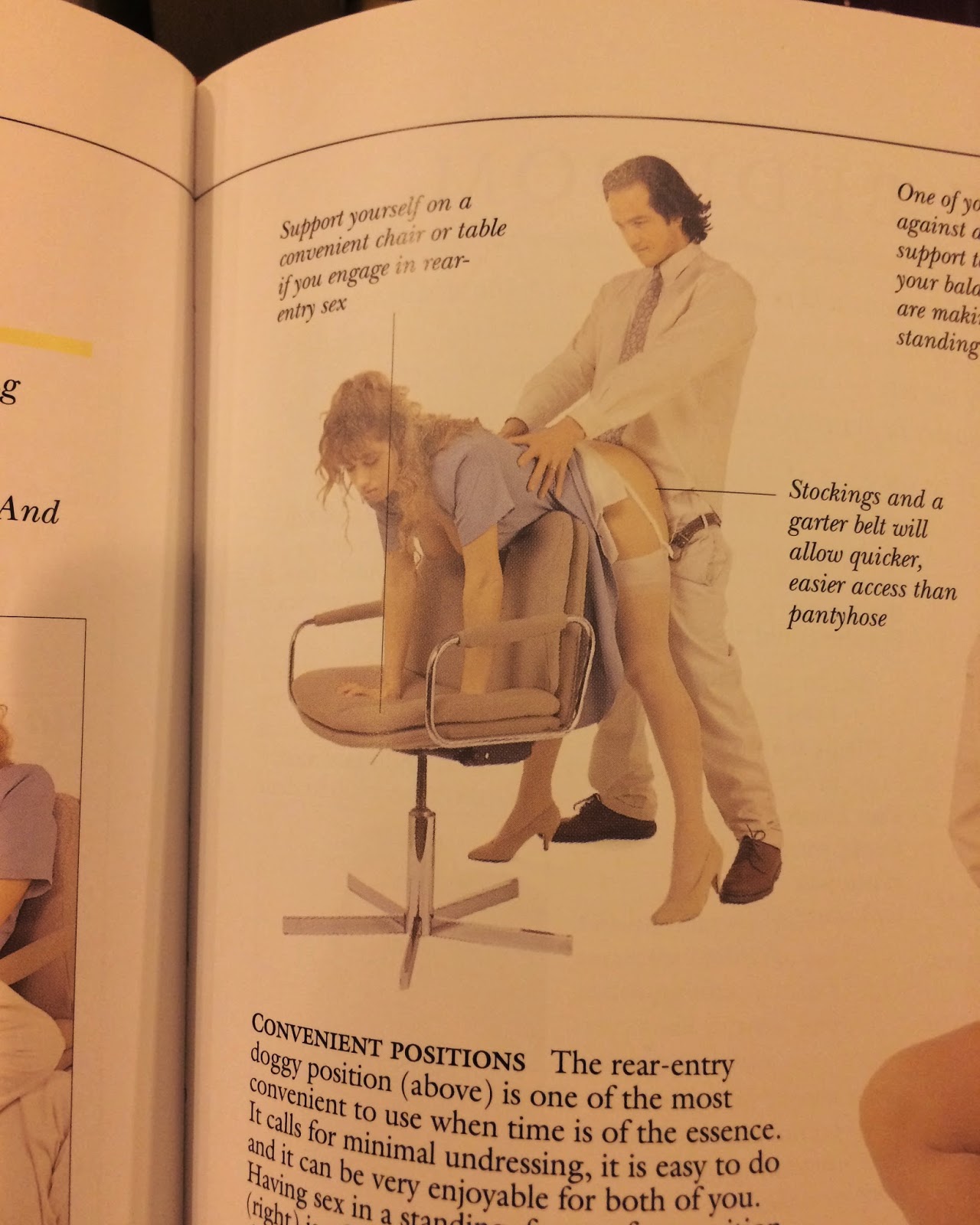 Apparently "spontaneous lovemaking" usually takes place in the office at a place that can't afford the Herman Miller Aeron Chair, now available in True Black. This position is called "Downward Facing Secretary", sometimes known as "Nailing the Co-Worker in Thigh-highs". 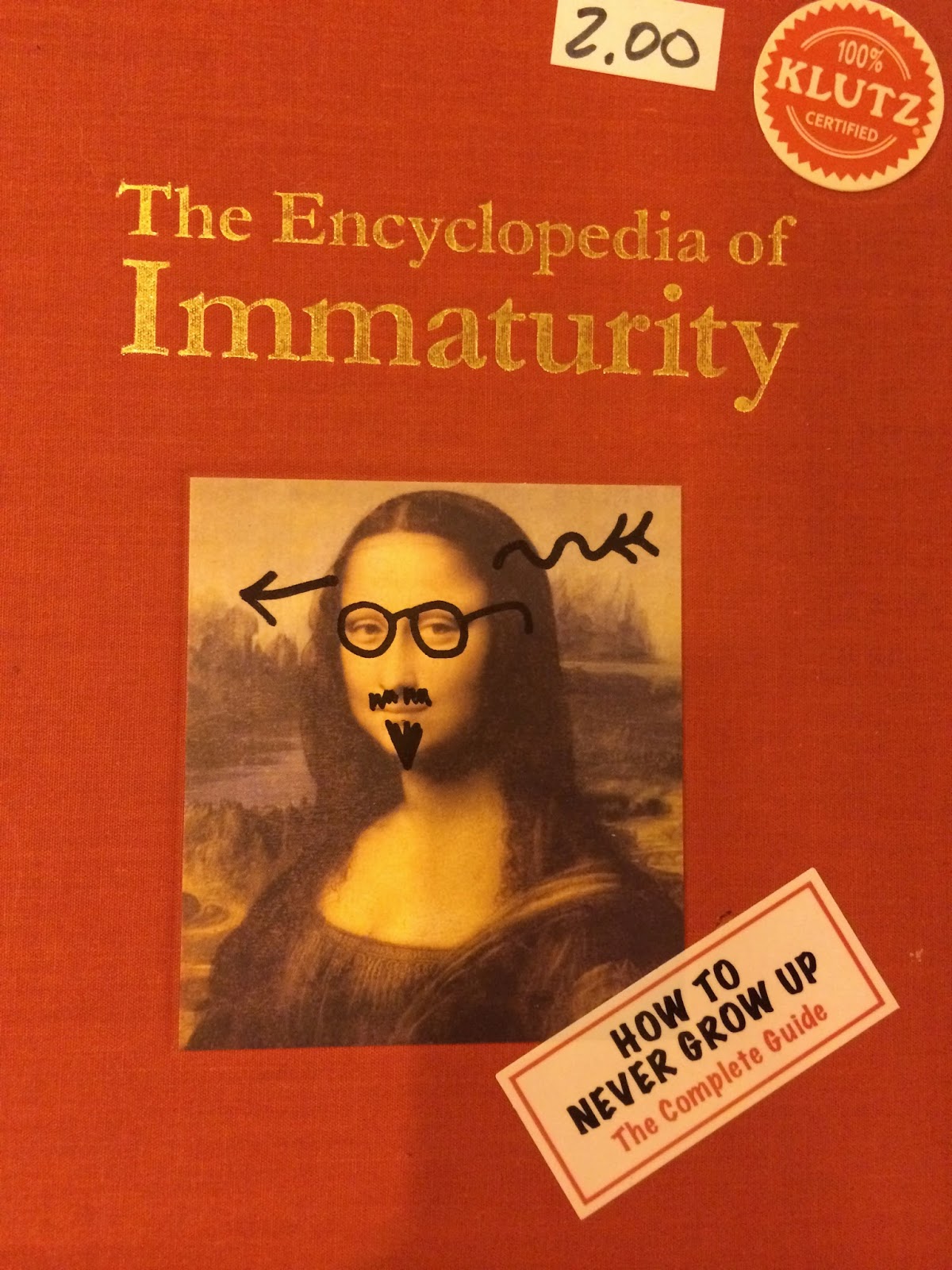 The perfect title to end with!