Cukes and Lopes in the Peach State

I had thirty minutes to myself when I was in Atlanta and thought, wow, one great thing about having the attention span of a gnat is that I have time to take in a museum. Yes, I'm sure you've had the same thoughts, too. It's late... you're away on a business trip...and feeling a little lonely...and a little frisky... Oh, wait, scratch that! Different blog! 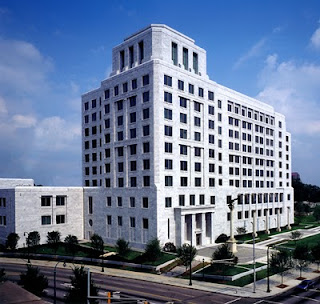 It might just be an urban myth, but I heard that the Atlanta Federal Reserve Museum on Peachtree Street was exhibiting the most amazing set of minutes from the first meeting of the Unified Task Force on Check Clearing. And what's more, they were typed on an original non-correcting IBM Selectric. Cool, no? Yes, the place looked that exciting. Unfortunately, I arrived at 4:30 only to find the place closed at 4:00. The guards looked at me as if I were the reincarnation of Willie Sutton. Apparently Southern hospitality clocked out at 4:00, too. I didn't linger.

So back out onto Peachtree Street I went. There are a couple of blocks in Midtown Atlanta that are reminiscent of Las Vegas' City Center. However, there are important differences between them. Atlanta has The Margaret Mitchell House (which is really an apartment) and humidity, whereas Vegas has The Atomic Testing Museum and newspaper boxes filled with free sex newspapers. 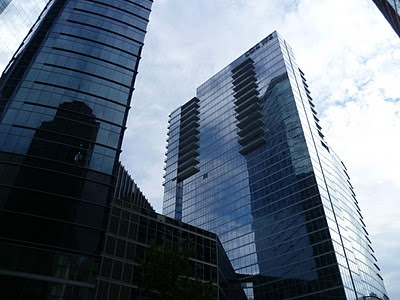 Atlanta has something else going for it, too. Next to an asparagus patch of slick high rises is Dewberry Market, the home of Georgia Farm to Table. The little vegetable stand seems to be daring some rapacious Aston-Martin driving real estate developer to demolish it on behalf of The Intergalactic Food Product Corporation. 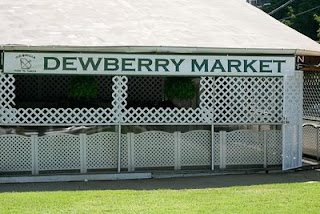 The place was somewhat stark on the exterior and the interior wasn't exactly a groaning board of Martha Stewart and Ina Garten-ness. However, I think that was a fact of the time and place--late summer in Georgia isn't exactly the time for quivering mounds of juicy, mouth watering, dewy melons, ready to be sampled. Oh wait, that's for that other blog again! My bad!!

However, the market did have attractive displays of eggplant, tomatoes, squash and other late summer vegetables. What the signs lack in spelling they make up in naive charm. 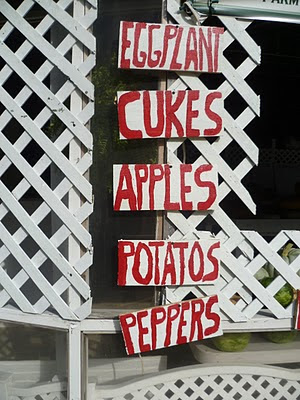 The market sold heirloom pumpkin varieties, including the Apple pumpkin, the Cinderella pumpkin, and the Looks As If It Were Fertilized With Contaminated Water From Japan's Fukushima Nuclear Power Plant pumpkin. 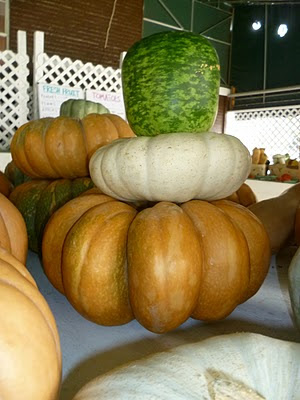 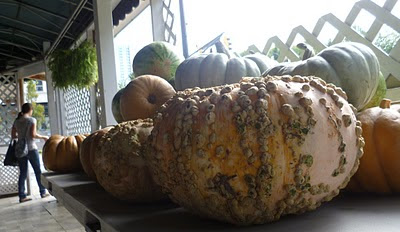 One variety of pumpkin reminded me of a punch line of my mother's, "I didn't say it had warts on it, I said it FELT like it had warts on it."  I don't remember the joke. I'm not sure that she did either. She found just the punch line to be quite amusing and threw it out there occasionally and would chuckle to herself all over again. Laughing at one's own jokes, like the knobby skin of these pumpkins, is obviously a genetic trait. 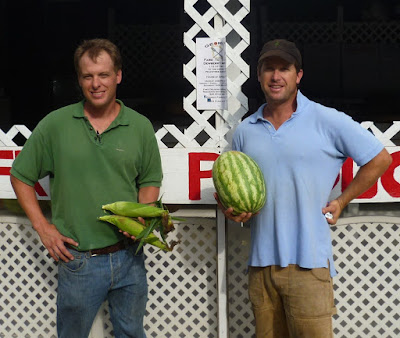 The owners of Georgia Farm to Table, Matt and Jeff Bowman, were working hard at the market that afternoon. They seemed like nice guys and chatted up the customers in that grown-up Southern frat guy sort of way that gay somewhat southern Yankees find to be so charming.

I asked if I could take a couple of photos for my blog. Obviously believing that there's no such thing as bad publicity, they said sure, take as many as you'd like.

"What's your blog about?"

"My fucked up life. Isn't that what all blogs are about?"

I told them that I loved the place and asked what they studied in college, thinking the answer would be sustainable agriculture or something like that.

The answer, of course, was "Partyin'".

More guffaws, this time accompanied by knowing looks. Apparently they were honor students.

In a display of G. Gordon Liddy-like willpower, I did not ask where they had gone to school. I knew that there was an extremely high likelihood that they would say UGA. And if they had said that, my involuntary response (move over Pavlov's dog) would have been to say, "I hear from a friend that if you drive through Athens real slow, with the window rolled down in your car, they throw a diploma in."

More guffaws, but this time they were silent and I kept them to myself. Even in the rarely seen (or heard) silent mode, I find myself so amusing.

The market was a great antidote to the sea of corporate anonymity surrounding it and Matt and Jeff were super ambassadors for Atlanta. Later that evening, my friend Kevin gave me a tour of the city, and lo and behold, Dewberry Market is just a few blocks from the two streets Kevin pointed out to me as the intersection of  Gay and Gay. No wonder Matt and Jeff had such a great inventory of  Cinderella pumpkins. You never know when a fairy Godmother is going to stop by.

Matt and Jeff said that they mostly lived for selling Christmas trees, and indeed they had a big front yard that must be perfect for Christmas tree lot. Their business, Tradition Trees, sounds like the place to go if you're in the market for a  Fraser Fur with no gappy parts or flat sides.  So when some E-Bay shopper finally buys your Liberace-esque aluminum tree, illuminated by the rotating multicolor light, run over to Matt and Jeff's for the real deal.

In addition to selling fruit, veg and Christmas trees, Jeff is a published writer and aspiring novelist and Matt is an avid outdoorsman. They're just the kind of folks to take on the challenge of bringing jaded urbanites the simple joys of fresh, local fruit, vegetables, real Christmas trees, and probably even Hanukkah bushes if that's your thing.  And the best part is, they're not straight out of a Hallmark card. They apparently know a thing or two about partyin', too.
Posted by Rick Bryant at 9:37 PM