Getting There is Half The Fun

When I go to a conference in a city that has a Major League Baseball team, I like to go to a game. I know, I know, I was the last guy picked in gym class and I throw like a girl. Nevertheless, I find an evening at the ballpark to be all sorts of fun. The stadiums themselves can be visually and architecturally interesting, the fans are an endless source of amusement, and one meal a year of ballpark grub is actually pretty tasty. I'm not good at any sport (unless you count Jeopardy! and I'm not as good at that as I used to be) but I can get sucked in to the drama of a bunch of guys in tight uniforms adjusting themselves repeatedly while trying to hit a fast moving leather ball with a Louisville Slugger. What's not to like? 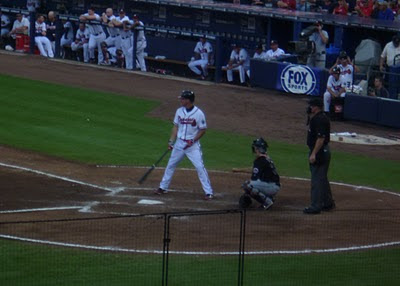 So when I was just in Atlanta with Carol and Pam, I was glad to see that the Braves were in town, playing the Mets. Since the Braves are in the wild card race, the game really counts and there were sure to be be a zillion people there. A few clicks on Stubhub and great seats--in the lower deck, right by Chipper Jones on third base--were in hand.

I asked the concierge at our hotel, the W in Midtown, about getting a lift to Turner Field in the hotel's courtesy van. After all, there were three of us, and in theory, hotels like making guests happy if they're spending enough money and not calling out for a steady stream of poorly dressed hookers. We had three rooms and hadn't yet dialed up a single hooker, so I figured getting ride would be no sweat.

Yes, sure we can take you to the game Mr. Bryant. All you need to do is to listen to the sales pitch for our courtesy Acura MDX. (Seriously, Acura MDX sounds like Japanese medication for jock itch. Who names cars these days?) Oh and we'll only take you there, you're on your own when it comes to getting back. In other words, it was going to be like listening to the sales pitch for a time share that gets stuck in traffic.  Quite choice. An Acura MDX? I could listen to the sales pitch forever without a chance of buying one, so I said "Great!! Where and when do we need to meet the car to be at Turner Field at 4:00 p.m.?"

So with our new best friend Deitrich at the wheel, we piled into the Acura MDX V-8. He was a large, gregarious man with great sales skills--it took him a nanosecond to commit each of our names to memory. Compared to my low rent Ford Ranger, the car really was something. It had air bags everywhere, including a built in Whoopee Cushion in the passenger seat. The design of the interior was a bit baroque for my tastes, and parts of the instrument panel were covered in something that looked like faux burled walnut, with the emphasis on the faux. The ride was nice, but at almost $50,000 it should have been.

As we motored through Hotlanta on our way to 755 Hank Aaron Drive, we listened to both a recorded sales spiel and a soft sell from Dietrich. I filled out a form attached to a clipboard, telling Acura what I thought it wanted to hear. I indicated that I was a handsome, high income straight well-hung investor looking for an SUV that my sticks (i.e. golf clubs) and I would look great in. I also took pains to point out that while the car may get dirty (by accident) I would never take it off paved roads, even to an artisanal brie ranch with valet parking. Finally, I made it plain that I wanted a car so nondescript that my trophy wife wouldn't notice when I parked at the strip gentlemen's club where her sister worked as an ecdysiast. 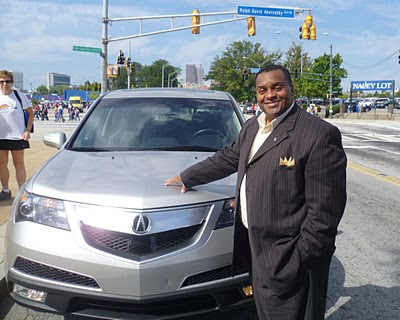 In addition to the providing details on the car's navigation system, built in microwave oven, and iPad cozy in the front console, Dietrich shared tales about his wife's menopause (dual climate controls really come in handy great when the old ball and chain has a hot flash), his favorite sports teams (interestingly enough, not the Braves) and how he preferred Atlanta to New York, his former home. After we bonded over a mutual dislike of cheap shoes (he was sporting new brown suede oxfords with a cap toe), he gave us directions back to the hotel. Fortunately, these did not involve dropping bread crumbs out the window of the car and following the trail back to the the W. 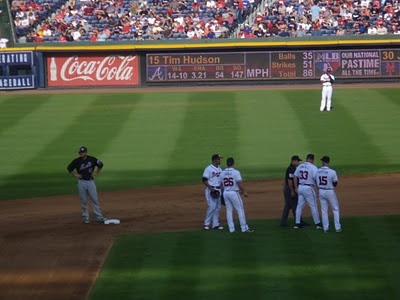 The game was a bit of a pitching duel. The Braves won, 1-0, scoring in the 8th inning. The crowd did the wave and there was lots of tomahawk chopping, both of which made me feel as if I was at an Indian pow wow choreographed by Busby Berkeley and Leni Riefenstahl. 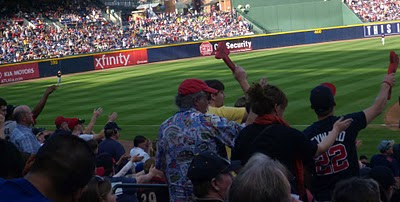 When the family next to us noticed that I was wearing a UVa hat, we became good chums since they were from Charlottesville. They assumed that I knew much more about UVa sports than I do; I tried to act butch and said things like "Definitely" a lot.

The Wahoo family gave us the low down on the ballpark food, which, unfortunately, wasn't that good.  I enjoyed my hotdog, but Pam's nachos featured too many colors not found in nature for my tastes. 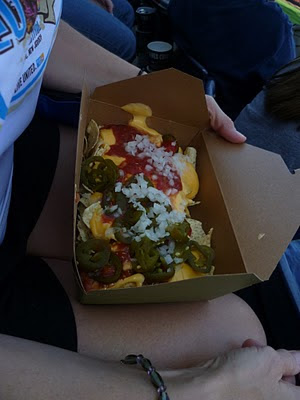 Yes, this is a before picture.

Between two late innings they had an American Kabuki (i.e. mascot) race sponsored by Homo, I mean Home, Depot. The contestants were dressed as hot sellers at Home Depot in Atlanta....a William T. Sherman Autograph Model Gas Grille, a Bosch Weapon of Grass Destruction String Trimmer, and a Confederate flag liner for the bottom of an above ground pool. The crowd was definitely rooting for the pool liner, and with the rebel yells ringing, it carried the day. 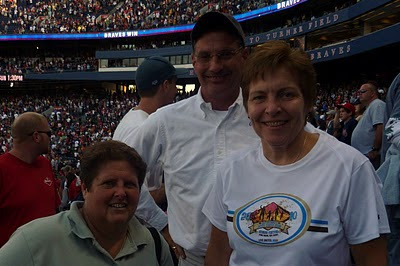 After the game Carol, Pam, and I only stayed long enough for the traditional group picture and so missed the post game Styx concert. (Had it been Doug Clark and the Hot Nuts, I would have stayed.) We had an appointment with Destiny (no I did not call out for a hooker) at the the Thai restaurant next to the hotel. More on that later.
Posted by Rick Bryant at 9:23 PM