It's A Jungle Out There 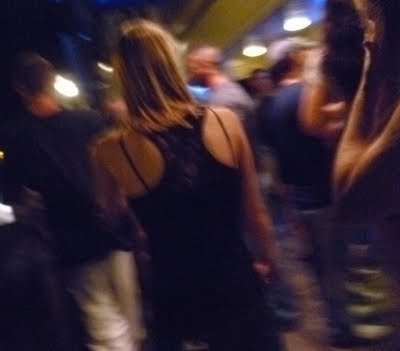 Last evening, after the Alabama game, I went downtown to see some friends and have a beer. While it can be a bit frightening, I like seeing what's going on in downtown State College on the Saturday night of a big football weekend. It's quite a fashion show. There are often people--both Penn State fans and those from the visiting school--wearing outlandish school spirit finery, young women wearing miniscule dresses and shoes picked out in the dominatrix department at PayLess, and young men who obviously spend a lot of time picking through the piles of wrinkled cargo shorts on the floor trying to look just the right amout of casual. Lots of kids are on their phones, either looking for the proverbial better offer, or reporting on the situation, just like Edward R. Murrow from the rooftops of London during The Blitz. 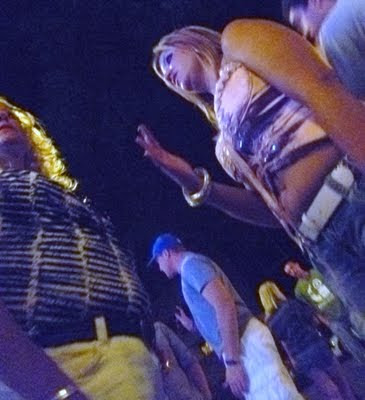 Occasionally there are people from out of town who you would think fall into the "old enough to know better" category but who clearly don't know better. Like this woman and her friend. I was standing outside Chumleys, chatting with a friend who was smoking, and Miss Hot Mess and her sister in fashion crime, Miss Scorching Mess, came up to us and asked if we were bouncers. This is the first time that anyone has ever asked me, the original picked-last-in-gym-class guy, if I escorted drunks from bars for a living.  I asked them where they were from, and the small town in western Pennsylvania they mentioned was was someplace I'd never heard of, and clearly not yet reached by fashion magazines. They were intrigued and appalled by the evangelist with the loudspeaker who had set up shop in between parking spaces, just across College Avenue from us. The evangelist was going on about Jesus, fornication, sin, and Hell, not necessarily in that order.  Had he been only been talking about the evils of bad hair, clothing several sizes too small, hooker shoes, and too much Axe Body Spray, I might have yelled back, "Amen, Brother!" 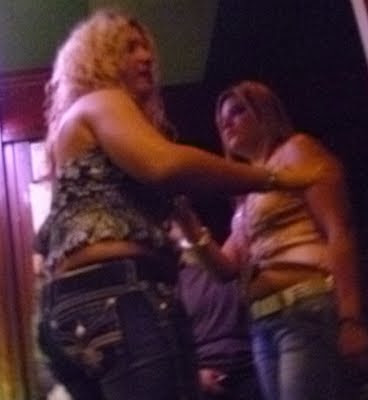 The Mess sisters, who had had a few, said something finding a bathroom. It was difficult to hear well over the din. I said, "Are you looking for a john?", not thinking that they could be actual hookers instead of just having the shoes. They said " 'Oh, you said 'the john'....you're so polite. We just usually say, 'I need to take a piss.' " I thought to myself, yes, I bet you do. Then I showed them the way to the ladies room at the Allen Street Grille and took that as my cue to walk home.
Posted by Rick Bryant at 12:23 PM