It's been an uneventful week. The highlight so far was dinner at Mad Mex with an old friend. I took my camera along, but left it in my pocket, since I didn't want to lose it. Keeping something in my pocket isn't a guarantee against losing it for me. I mean, I eventually lost my virginity, though that was in my pants, too. 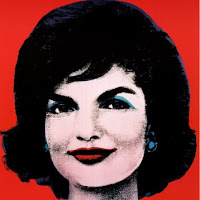 Now that there is a  new Jackie Kennedy book accompanied by recordings of interviews she did with Arthur Schlesinger, Jr., I think the world may be ready for a Jackie Kennedy GPS voice. I can just hear those breathy Miss Porter's tones:  "At the red light--reminiscent of Stephen Crane's Red Badge of Courage, don't you think?--turn right, but not as far right as Pat Nixon in her Republican cloth coat." It will be a hit with C-SPAN viewers everywhere.

I saw her once. Jackie O, as she was then. In the flesh. I was in New York City with friends...it was gosh, during the Reagan Administration, otherwise known as the 1980s. My chums and I were taking in the show at the Costume Institute of the Metropolitan Museum of Art. I don't remember the exhibit but it was one of those Diana Vreeland blockbusters, something like The Majesty of the British Raj, or The Splendors of The Village People, or maybe even  Me Tarzan, You Jane Russell. The Met's basement galleries were quite crowded and rather dark, since direct light would damage the clothing on display.

I was wandering along in my usual daze when one of my friends whispered  "I think that's Jackie Kennedy". With my typical grace and nonchalance (i.e. less than none and then some), I looked around more quickly than if she'd she's said, "Jesus AND Amelia Earhart are in the next gallery and you have got to see what they're wearing!" Linda Blair, turning her head a full 360 degrees in The Exorcist, has nothing on me. I'm surprised I'm not still going to the chiropractor.

After the initial stage whispered "I don't see her." and "Are you sure?" there, right across the gallery was Jackie O, the most famous woman in the world . She was wearing a long black coat and black pants, with big hair and her trademark big round sunglasses, looking just the way she did in People magazine. 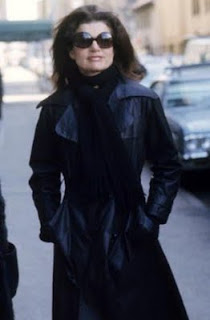 Considering how dark the gallery was and the tint of her glasses, she probably saw about as much of the exhibit as Stevie Wonder would have. She was by herself, with no visible bodyguards in tow, studiously checking out the frocks on exhibit. My friend Tracy and I stood next to her and made some extremely amusing comments about something we found to be extremely amusing. Jackie O didn't crack a smile or acknowledge our presence. She just floated by, presumably not realizing that we were two of the fourteen funniest people at our high school lunch table.

Since this was roughly thirty years ago, no one had a cell phone camera. Tweeting was something birds did,  and updating one's status meant buying a more expensive pair of designer jeans. Of course, my friends and I told all of our friends about seeing her. However, the Jackie O story paled in comparison to that weekend's saga of my locking the keys in the trunk of my car and how it took a Brooklyn locksmith 6 hours to get them out, and the tale of how my loud snoring kept everyone in my friends' apartment awake at night. Jackie O would have really been interested in those stories too, had she only stopped to listen.
Posted by Rick Bryant at 9:12 PM