We tend to ignore the things that are practically in our back yards. New Yorkers don't go to the Statue of Liberty and lots of San Franciscans have never hopped on a cable car and pretended that they were in a Rice-A-Roni commercial. I'm fairly confident in saying that people from State College rarely go to the nearby burgs just to poke around. 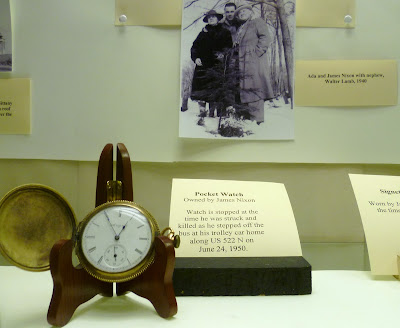 I ran across this gem in the McCoy House, the home of the Mifflin County Historical Society, in Lewistown Pennsylvania. The McCoy House was the home of General Frank McCoy, a now mostly forgotten U.S. Army general who served in the Spanish-American War and World War I. During World War I, he was the commander of the "Fighting" 69th  Regiment of the Rainbow Division.  I am glad they specified that it was the "Fighting" 69th, since fighting isn't typically what I think of when the number 69 comes up in conversation. 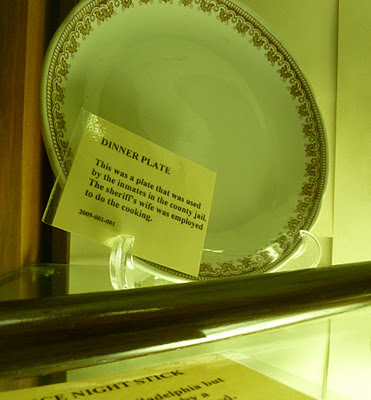 Wow real china at the Mifflin County jail ! Who knew? It was Melmac--a product of American Cyanamid--in the Bryant house when I was a kid. I thought inmates used metal plates and mugs and then banged the cups on the bars when something was up in the cell block. At least that's what they did in Jimmy Cagney movies of the 1930s (no, not the ones where he was a song and dance man) from which I gleaned my encyclopedic knowledge of early twentieth century penal practices. 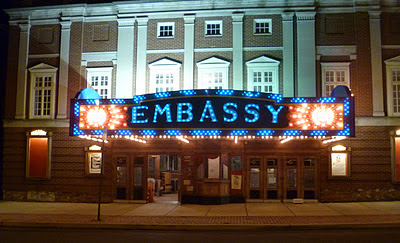 Lewistown used to be a very prosperous place. Now it's a place people from State College whiz by driving as fast as possible on Route 322. Downtown Lewistown is filled with great houses in addition to handsome but often forlorn commercial and public buildings from the 19th and early 20th centuries. The Embassy Theatre is a good example of what's there. It was built as a silent movie house and then adapted to show "talkies" when they became common. The group that owns the theatre has done a super job restoring the marquee, and it's illuminated each year during the Lewistown Festival of Ice in early December. Unfortunately the rest of the building is in sort of a Miss Havisham state, long ignored, kinda dusty, and ready to go up in flames. The locals are working on a plan to restore the place and who knows, their plans just might work out. 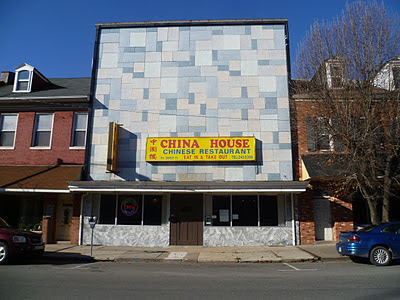 This is in the so bad that it's good category. On second thought, perhaps it's still bad. Too many items from Column A and not enough from Column B, I think. 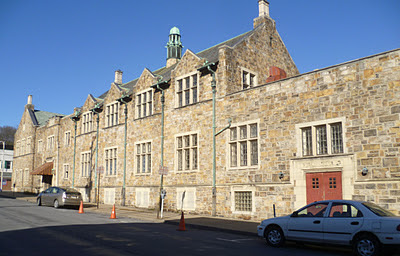 The Lewistown Elks Club building has fallen into disrepair and seems to be vacant. It must have been quite something in its day, when everyone knew that B.P.O.E. (Benevolent and Protective Order of Elks) really stood for "Best People on Earth."  If the place were in good repair, it could pass for a building on the Yale University campus. If it weren't for that "location, location, location" thing it would be a fun project to buy and bring back to life. I haven't been inside, but am quite curious about what it's like. There's probably a little stable where they kept the donkeys used in initiation rites. Or, wait, that wasn't at an Elks' initiation, it was a "variety" show in Baltimore. 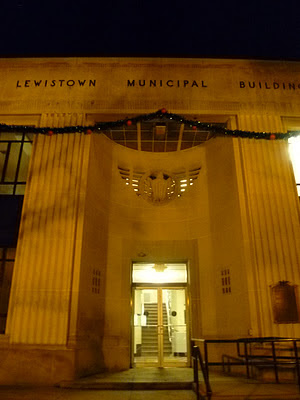 Then there is the Lewistown Municipal Building, a wonderful example of Moderne architecture. The eagle at the top of the entrance exedra looks as if it has been designed by Albert Speer.
Downtown Lewistown has lots of buildings that other towns or college campuses would love to have. Unfortunately most of the industry that made Lewistown prosperous has gone elsewhere. In addition, the retail climate in the United States has changed, and people no longer go to downtowns to shop at Mom and Pop stores. Today we shop at in strip developments that look just like every other strip development. At the local outpost of Mega Lo Mart we park for "free" and then push a gigantic plastic cart with a bum wheel around the store. We taste bits of all sorts of sampled crap, and then load up the cart with stuff made in Chinese prisons. Of course we have to be happy with one brand of fishnet stockings (no reinforced cotton crotch, not in your exact size, nor quite the color you wanted) and the fact that mucilage only comes in a 7-pak with a free bottle of White Out. But hey, Utz BBQ potato chips are practically free in the bigger than you thought possible bag, and they have barrels of $5 DVDs (The ZaSu Pitts Collection, Vol. 2) that people find hard to resist. 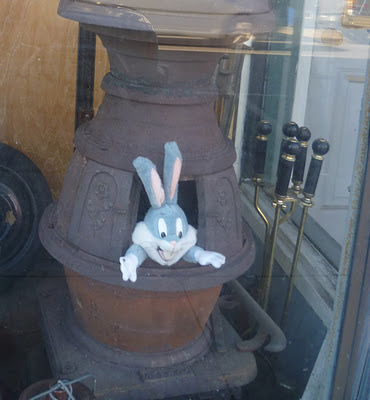 There still are some good reasons to go to downtown Lewistown. There are a couple of good places to eat, and if thrift shops are your thing, it's the Mother Lode. If you want a Bugs Bunny, or better yet, a Bugs Bunny in a pot bellied stove, it should be on your short list of places to go.
Posted by Rick Bryant at 5:28 PM