Last week UVa chums invited me to an impromptu get together in Washington the evening before Thanksgiving. I don't see them very often and they're lots of fun, so I said "Count me in!"

When I go to Washington, I park at the closest Metro stop to State College (Shady Grove), and take the Metro into the District. I'm a do-gooder yokel; I think mass transit can be fun, except when you are sitting by smelly, annoying, or stupid people, which, in fact, is most of the time. Nevertheless, it's a moving hell as opposed to the stationary hell of bumper to bumper traffic and parking in the city.

Wednesday night with the gang was indeed a great time. I went to Italy with most of them in the summer of uh, 19-ahem, and we hadn't gotten together as a group since until last year when we all went to the not very interesting memorial service (no singing, no dancing, no guns, no strippers) in Virginia of the professor in charge of our Italian trip. On the bright side, I did learn the word "polymath" from the only good eulogy of the afternoon and have been trying to work it into conversation steadily ever since. While the service was boring, the ride to and from wasn't as we caught up in the way that long lost friends used to, before the invention of social networking.

This time we covered everything from how aged and infirm (or dead) our parents currently are to story of Di and Bill receiving anonymous postcards accusing them of being in a Chardonnay and brie consuming cabal that has taken over their town, to the amusing tale of the quiet classmate who joined the gay rodeo. Yes, there is gay rodeo. This is not code for something that I would be embarrassed to put into English. 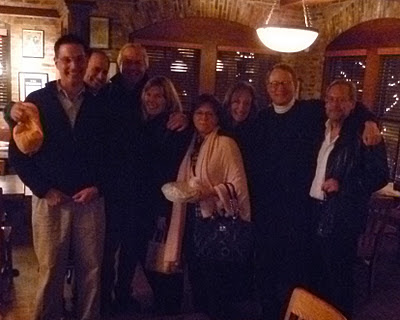 At the end of the laughter-filled evening, we shared semi-boozy goodbyes and posed for not very good photos taken by the restaurant waitstaff. We promised that we'd get together again soon. And ya know, I think we will.


Early Thanksgiving morning, I got up with only a trace of the Country Club Flu (i.e. hangover) and decided to head out to the Dupont Circle Starbucks for coffee. To paraphrase Gertrude Stein, a Starbucks is a Starbucks is a Starbucks. There isn't much room for local color, except on the bulletin board. At my Starbucks in State College, the flyers on the bulletin board are about seeking a former majorette turned accountant for a mini twirling troupe or searching for Prius-driving Republicans with sleep apnea to participate in traffic studies. In Washington, they're about taking fencing lessons in a building designed by Stanford White. Finally, the chance to say En Garde! and really mean it! 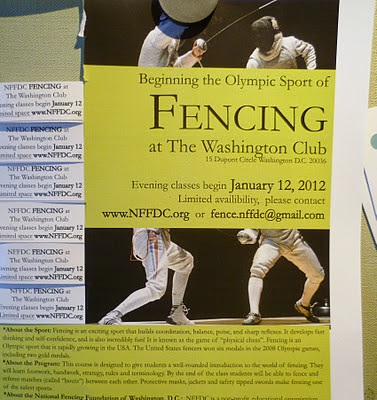 I was sold on the fencing lessons until I got to the part where they called it "physical chess". As opposed to metaphysical chess, with the board and all that. Obviously this flyer was written by the same person who called architecture "frozen music." 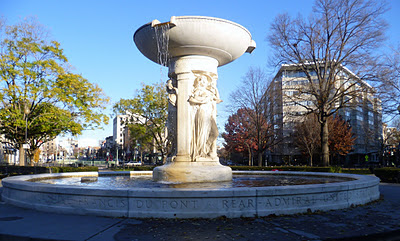 Speaking of architecture, the fountain in the center of Dupont Circle is a monument to Samuel F. Du Pont (yes, he's a big "D" and a big "P") and was designed by sculptor Daniel Chester French and architect Henry Bacon, who also teamed up to bring us the Lincoln Memorial.  Because Dupont Circle is Washington's gayborhood, and I have the maturity level of a 13 year old, I always chuckle when I walk by and read that Samuel F. Du Pont was a Rear Admiral. Even when I am alone at 8:00 a.m. on Thanksgiving morning with a slight hangover, I find myself to be so amusing. 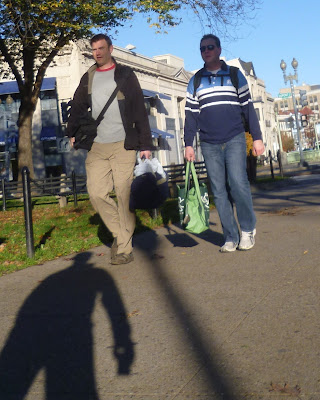 The locals are a brave lot, because even when toting artisanal green bean casserole to Bruce and Lenny's for Thanksgiving dinner they are not frightened by menacing pinheaded shadow-casting aliens. 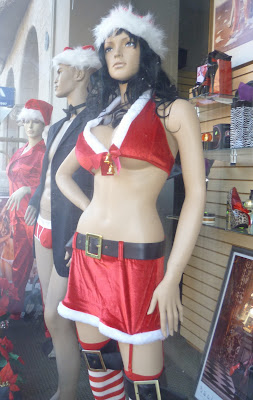 The shoppes of Dupont Circle feature all sorts of interesting wares. This outfit really puts the ho in "Ho Ho Ho." 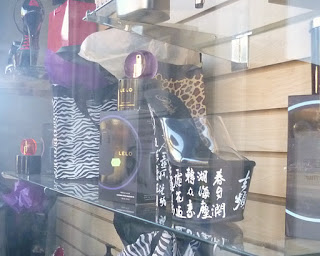 I suppose the calligraphy on the side of these high heels turns them from plain old hooker shoes to Trained in the Mysterious Love Arts of the Far East hooker shoes. Then again, the writing might just be a recipe for General Tso's Chicken. 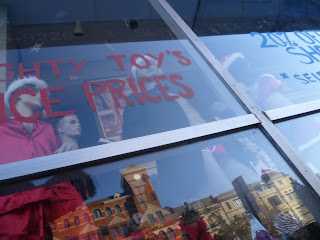 The sign in the window promised  Naughty Toy's and Nice Prices. Presumably they know more about erotica than they do about grammar. 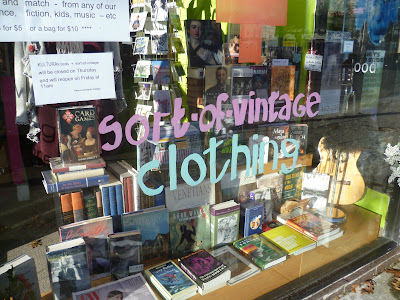 Just across the street from Santa's buxom helper was sort-of-vintage clothing, where-every-word-was-lower-case-and-hypenated-unnecessarily. Yes, I know those are books instead of clothes in the window. I didn't understand that either. 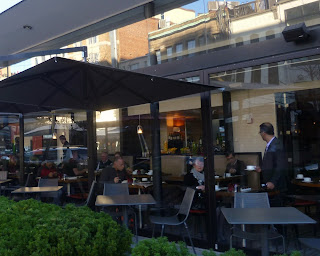 The Cafe Dupont looks as if it could be an ad in Dwell magazine. I've always meant to stop there for a mid century modern omelet but have never gotten around to it. Maybe next time. The woman in the black dress will probably still be there when I get back. 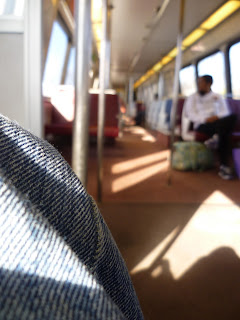 Soon enough, it was time to head back to State College to make an apple pie to take to Thanksgiving dinner with friends. The Metro out to Shady Grove was just about deserted except for an attractive woman, neither smelly nor annoying, with an enormous Vera Bradley duffel. (OK, I wouldn't have picked out the duffel.) She'd been in some sort of race and was still wearing her number. It was a sunny day, my headache was gone, and I had some great new party shoes in  my overnight bag. And maybe, just maybe, a new recipe for General Tso's Chicken.