There is No Sanity Claus

A few years ago (ok, more than a few now that I’m looking at the date stamp on the photos), I was asked to play Santa at a preschool Christmas event. No, I don’t have any preschoolers from a trophy wife I’ve never told you about. Really, I don't! The director of the school was a friend and somehow found herself close to Christmas without a Santa for the school party. She asked me out of desperation.
I don’t know that she ever expected me to say yes since I’m not known as Mr. Christmas. I’ve never put up a tree in my house. I complain incessantly about Christmas shopping.  And even though I am a growing paunchier middle-aged guy, I hardly have the body of Santa.
I know from the short black and white silent 8mm film that I saw a zillion times when I was a kid that Hopalong Cassidy came to the rescue PDQ when there was a schoolmarm in distress.  Here was a real live schoolmarm in distress, asking me to play Santa Claus. I ask you, what better role model is there than Hopalong Cassidy? How could I say no?
Fortunately my friend’s father had been an actual department store Santa, and so she had a really nice red corduroy Santa suit with all the accessories (life often comes down to the right accessories, doesn’t it?)  My duties would be to enter the party, exclaim Ho Ho Ho without sounding like I was referring to any of the moms in their party dresses; hand out candy canes, and have the kids sit on my lap and tell me what they wanted for Christmas.  Even I could do that.  Well, OK, I was a tad worried about the Ho Ho Ho part. I mean, you can’t be too sure what’s going to pass for a party frock at a preschool Christmas party these days.

The evening of the event I put on the red suit, white wig and matching beard.  I stuffed a couple of sofa pillows into my pants and tunic to make me look appropriately well fed. My black combat boots finished the outfit.  Damn, I am so workin’ Santa, I thought to myself.


When I got into my Volkswagen to drive to the party I immediately knew the first reason why Santa takes a sleigh drawn by eight tiny reindeer: he doesn't fit behind the wheel of a car. Yikes. Just getting out of the driveway was quite a struggle.
When I finally got to my first traffic light and a carload of jolly college boys pulled up next to me, I learned the second reason why Santa takes a sleigh that flies over rooftops (and traffic). Santa has a zillion friends and they all want face time. Hey Santa!!! Why don’t you come out for some beers with us!!  Yo Santa! Can I have a Tri-Delt for Christmas? Oh and she should have big tits! I’ve been real good. Apparently these lads could only think of "Ho Ho Ho" as a string of nouns.
Fortunately, I hit the next few lights green and didn’t have to chat up any more of Santa’s nearest and dearest. By the time I got to the party, I had decided that I was going to channel Dame Edna Everage’s close personal friend, Queen Elizabeth. In other words, I was going to make small talk, smile, and although tired, look remarkably fresh. 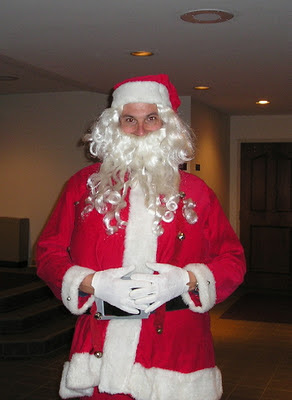 That was the plan anyway. Before too long, I was knee deep in kids who were eager to spend quality time with Kris Kringle. While Mom and Dad immortalized the moment with their cameras, the kids crawled up onto my lap and asked for toys that I didn’t know existed. I had no clue that there was a Stealth Technology Barbie or that the EZ Bake Oven came in a Locavore Edition. In those cases, I told the kids, Oh I will talk to the elves about that and we’ll see what we can do. Fortunately I have had plenty of practice with the old non-committal Sure I will try to call you in the morning voice.
After I had chatted up all the little kids and had handed out enough candy canes to fully outfit the rehab wing of a gingerbread VA hospital. I stood up and looked at my friend, expecting the old “thumbs up” sign, since, quite frankly, I was killing as Santa.  Instead as soon as I got to my feet, I was pushed into an open the closet exactly the way Ronald Reagan was pushed into the Presidential limo by the Secret Service when John Hinckley, Jr. opened fire outside the Connecticut Avenue Hilton.  Yikes! What was going on?
What was going on was that when I stood up my pants didn’t.  Call me Flasher Santa. I didn’t notice that anything was wrong because I had a pair of trousers on under my Santa suit. There were no Arctic breezes on Santa’s North Pole.  Fortunately, most of the kids didn’t notice and the moms got a quite a charge out of it.

Oh well, even the best Santas have and occasional off day.
Interestingly enough they asked me to come back the following year. What’s a wardrobe malfunction among friends?
This time, I resolved to skip shoving pillows into my tunic since I heard more than once that they made me look more like Jane Russell than Santa Claus. I went to the Penn State Theatre Department's costume shop and borrowed a fat suit. There they were on hangers, each with a name:  Winston Churchill, William Howard Taft, Orson Welles, and so on. Who knew?
And since driving was a chore the last time, I recruited a friend to go along as an elf. As that eminent authority on Santa, David Sedaris, will confirm, all the better Santas have a posse. One elf, my trusty wingman, would have to do. I found him an elf costume with green felt tunic and a hat. The tights, of course, were my friend’s idea. There was plenty of room for Santa in Mr. Elf's truck.
At the party it was the same drill as the year before, ho ho ho-ing, candy canes, and listening to what the kids want for Christmas. By this time I knew all about Stealth Barbie, and the new hot video game, Super Mario Meets Faye, the Progressive Insurance Chick. While I entertained the kids, Mr. Elf chatted up the hot moms. 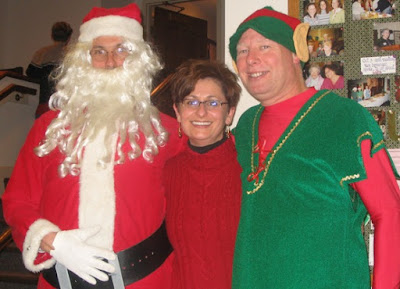 The son of one of my friends was at the party, and he reported in to his mother as follows:
Preschooler Son: I thought Rick was going to be Santa, but that’s not Rick, that’s Santa.
Mom: How do you know that’s Santa and not Rick?
Preschooler Son: Because none of Rick’s friends are elves.
He was right. None of my friends are elves.
But plenty of my friends are fairies, and so after the encore performance as S.C. we segued over to Chumley’s, the local gay bar. There is never a better time to take a straight guy to a gay bar for the first time in his life than when he’s dressed as an elf, with big pointy ears, a brightly colored felt tunic, and wearing red and green tights. You are guaranteed to be the life of the party.
We hit another bar (we had to walk right by, the crowd inside waved to us; it would have been rude not to go in) on our way back to Santa’s Workshop. A table of MILFs asked Mr. Elf and me to join them. We had a great time, but I lost my wig in the process. At least I didn’t lose the keys to the sleigh.
I didn’t get the Stealth Barbie or The Valley of the Dolls Xbox game for Christmas that year, but I got lots of better things. I got to show my friend the schoolmarm and her students that there really is a Santa Claus. The outings reinforced my belief in the old guy, too, since there is nothing like being around a bunch of little kids who are incredibly excited about Santa to make you believe, too. And mostly importantly, I got to take someone to a gay bar and to say Hands off, buster. That elf’s with me.
Posted by Rick Bryant at 10:36 PM