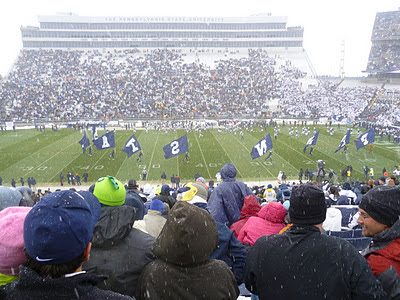 Last weekend I went to the Penn State vs. Illinois football game in a snowy October nor’easter. 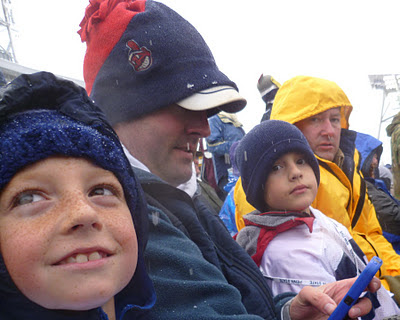 I was with my two great nephews Hayden (age 7) and Calvin (age 6) and their fathers, my two nephews Bryan (age fortysomething, in the yellow slicker) and Aaron (age fortysomething minus 8, iPhone in hand).  In the immortal words of Mr. Jefferson, I was spending time in the bosom of my family. It was a special occasion--the first Penn State game for both Hayden and Calvin. Their fathers are both Penn Staters. 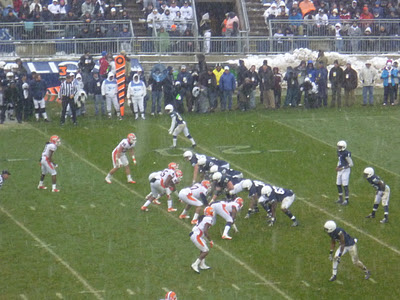 We had a fine time, despite getting too cold and too wet and leaving shortly after halftime. On the other hand, discovering that your tickets are not good for the entire game can lead to watching the second half on a gigantic high def television in the toasty confines of someone’s living room. That is, of course, what happened. While we missed being in Section WE, Row 35 for the play for the ages, when Illinois' game-tying field goal attempt bounced harmlessly off the upright as the clock wound down to zero, we were satisfied that everyone at Beaver Stadium could, if just for a moment, hear us cheering through the television set.

Watching football has been a part of my family's life for a long time. I’m pretty sure that in one of my old boxes of uncatalogued photos (everyone has at least one) there’s a photo (a daguerreotype, no doubt) of my grandparents in the stands at a Duke football game. My uncle went to school there, and my brother Jim did too, though Jim made an early and unplanned exit. 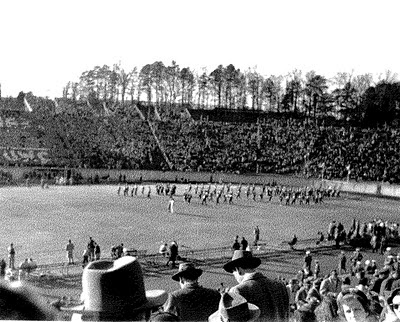 I didn't find the photo of my grandparents, but I did find a photo of the Duke band. I believe this was taken with a Kodak Brownie camera from a precursor to the U-2 spy plane. In my grandmother’s writing on the back of the photo it says. …"Duke Band coming on field at Duke - N.C. University game at Durham, N.C. Nov. 28, 1953.  Duke 35 N.C.U. 20." I thought that including the score was a nice touch on my grandmother's part. Take that, Tar Heels.

I was going to say lots of pithy stuff about how five generations of my family have enjoyed college football and isn’t this an interesting family tie, even though, as everyone on the planet knows, I throw like a girl and got a C in gym. ("Flunked sandbox" in the words of my father.) But on second thought, I realized that half of my family (I’m only including the living ones, dunno about the others.) doesn’t care at all about what happens on the gridiron on any given Saturday. Instead, the Bryants are joined together by bathroom humor, beer drinking, guns, cars, and crossing the line during the battle of wits at the dinner table. Or better yet, all of those things at once. As much as some of us love football, compared to all those other things, watching college kids move a little ball around a field is indeed pretty darned boring.
Posted by Rick Bryant at 1:20 PM