Yes, We Did Go Out Wearing That

My friend Pat sent me these great photos of the student section--that's right, the student section--at a UVa football game in Scott Stadium circa 1978. (Thanks, Pat!) Please take time to soak in the ostentatious displays of school spirit. The stands are a veritable sea of blue and orange and you can practically hear the whoops and cheers. 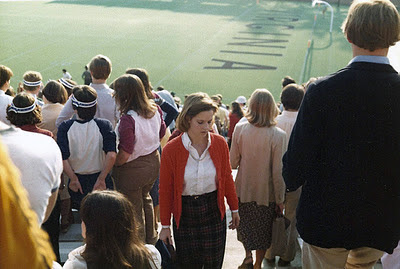 I believe this young woman, in a plaid skit, white blouse, and red cardigan wandered into the game when she was looking for a Junior League rally. Or maybe a United Daughters of the Confederacy event. Today her kids and their friends come to the stadium half naked, covered in blue and orange body paint. Some would call that progress. I might...if they're hot.

Miss Red Cardigan still hasn't told her husband or kids that she put herself through graduate school as a professional phone sex operator, earning a tidy sum on each $3.99 per minute phone call. She occasionally has a flashback when friends call to discuss upcoming social events and ask "What are you wearing?" 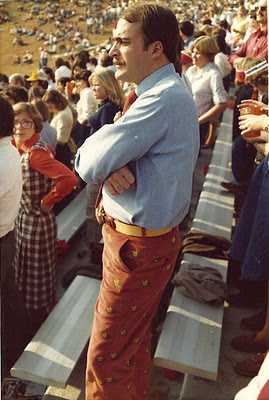 The guy in the orange corduroy trousers decorated with fox hunting motifs was Virginia's leading Snidely Whiplash impersonator. He frequently took part in festive grand opening celebrations at Kroger supermarkets, where his act included tying a comely female cashier (in the role of Nell Fenwick) to fake railroad tracks leading to the beer and wine section of the store. The store manager would then arrive just in time to save Nell and announce a special on Budweiser pounders.

Note that he is being ogled by the woman with the eyeglasses in a plaid jumper and Dorothy Hamill-esque haircut. Exhaustive research led me to identify her as Vanessa McAdoo, currently the shop steward of the United Federation of Schoolmarms, Local 1421 in Staunton, Virginia. She's fond of telling people at union meetings that she was a "saucy minx" when she was younger. So far, I'm not buying it. 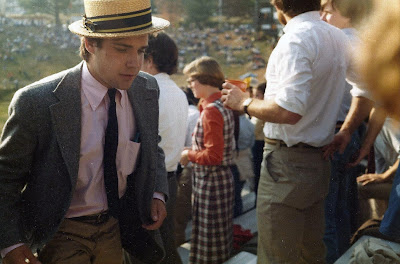 Even in Ralph Lauren ads, college boys no longer wear boater hats. As they say on Project Runway, and any other television show that has a gay character, this guy is really working it. However, the photo proves that you gotta work pretty hard to attract a saucy minx when you're competing with a Snidely Whiplash impersonator. 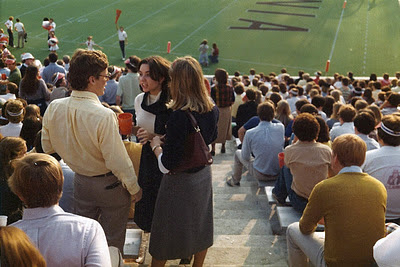 Close inspection reveals several orange plastic 16 oz. cups (aka Wahoo cups) in this photo. Sure, I'll have some rum in my Coke!  Oh, the rum's kicked? Why I would be delighted to make do with Rebel Yell. For medicinal purposes only, of course, I have been rather under the weather!! At least members of the crowd are engrossed in the on-field action. Chances are they weren't watching football. It's likely that they're watching the season-long Frisbee dog exhibition. Two dogs (and their handlers) would face off before kickoff each week, with the victory going to the pooch whose performance earned the loudest applause. The winners eventually faced off in a single elimination tournament, sort of like March Madness except with dogs and without Dick Vitale. It was incredibly entertaining. It wasn't all bandana-wearing Labrador Retrievers and Border Collies, there were also some little dogs that could really catch a Frisbee and put on a good show. Even when it comes to Frisbee dogs, size isn't everything.