All Football is Not Created Equal 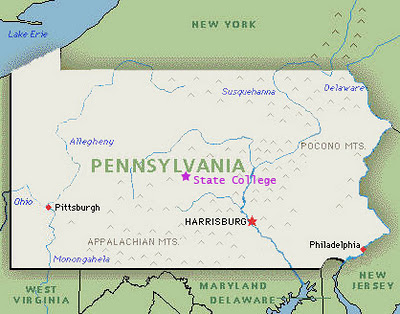 I grew up in a football town. I was naive enough to think everyone did. As people have noted over and over, Penn State football is one of the things that turned a nondescript burg in the middle of nowhere into Happy Valley. When it was time to spread my wings a bit, I went away to college. I didn’t go to a football school, and that was helpful in making me realize that there’s life after football. It's a lesson more of us need to hear. 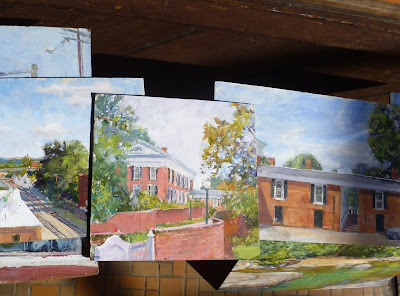 UVa was famous for lots of things. They included its founder, Mr. Jefferson (everyone in Charlottesville knows that his first name is Mister, not Thomas), the beauty of the University grounds (no, it’s not a campus), and the distinguished pipe smoking tweedy types on every corner. Oh and the well-regarded faculty too, can’t forget about them! But a successful football team wasn’t one of the bright spots. The team never won more than two games a year when I was in school.

Back in my day, football was so unpopular that students didn’t need tickets to go to games. Apparently the university administration felt there were enough better options on any given Saturday—genealogy seminars, skydiving lessons, or trying to recover from eating the local delicacy--a grilled glazed doughnut topped with a scoop of vanilla ice cream---that printing student tickets would have been an unnecessary expense. Life was simple: you flashed your student ID at the stadium gate and you were in. 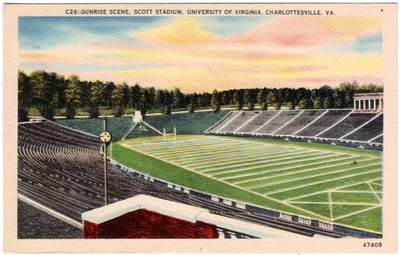 Scott Stadium held 28,000 in two gentle arcs of seats dug into a hillside. At the top of each arc of seats, right on the 50 yard line, were little neoclassical temples of red brick with white columns, like so many buildings on the grounds. One was for the University President and the other for the press. From the looks of their gracious digs I imagined that the local press dressed and acted like Heywood Hale Broun, while President Hereford and his chums drank mint juleps and munched on ham biscuits on the other side of the stadium in the President’s Box.

I’m sure the team tried, but typically they could only beat schools like VMI and the Warren G. Harding School for the Mentally Bewildered. At schools with real football teams, such as Clemson, where the “n” stands for knowledge, UVa didn’t stand a ghost of a chance.

I didn’t know anyone who went for the action on the fields but knew lots of people who went for the action in the stands, where it was sort of a fashion show meets cocktail party. In the days before people drank water, and even worse, proselytize about its putative health benefits, the beverage of choice was Coca-Cola. It came in something called a Wahoo cup, a wide-mouthed orange plastic 16oz. cup that everyone recognized as the perfect receptacle for Coke and a medicinal slosh or three of rum. Or of Jack Daniels, if you were hard core. If anything makes bad football good, it’s a medicinal slosh or three of rum in the first quarter. And in the second quarter. And at half time. Well, you get the point. 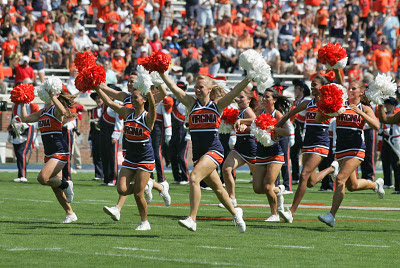 Our cheerleaders wore uniforms with a large Virginia looking like the masthead of Variety, the Hollywood newspaper, across their breastal areas. They looked like normal cheerleading uniforms to me. However, according to the school newspaper, The Cavalier Daily, the cheerleaders’ uniforms were a sign of the impending apocalypse, and even worse, of “creeping State U-ism”. This was an insidious fifth column movement that threatened to change dear old UVa, the home of Nameless Field (yes, that was its name) and the Lady Astor Tennis Courts (ditto) into a Big Ten University where everything was named for international agribusiness conglomerates, students wore shapeless polyester fast food uniforms, and Soylent Green was dining hall fare.

At one game, a man in the front row, clearly intoxicated and wearing a Viking helmet (that’s Viking, not Vikings), was ejected from the game for expressing his opinion of the cheerleaders by throwing a croquet mallet at them. Sic semper creeping State U-ism! as a descendant of John Wilkes Booth might have said. While a croquet mallet certainly can be a dangerous weapon, especially when wielded by a man in a Viking helmet, it fell well short of its intended targets. I’ve always wondered where he got that Viking helmet. I should have asked him if his mother was an opera singer.

At the end of the season when I was a first-year student it became obvious that our coach, Ulmo Shannon "Sonny" Randle, Jr., was going to be sacked, and I don’t mean in the football sense of the word. Students reacted joyfully...perhaps with a new coach a win was on the horizon! A rowdy but erudite section of students unfurled a large banner in the stadium saying Sic Transit Randle. If I have said it once, I have said it a thousand times, fans don’t bring nearly enough signs in Latin to football games these days. 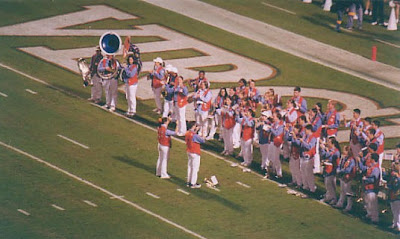 The Pep Band, officially The Award-Winning Virginia Fighting Cavalier Indoor/Outdoor Precision (?) Marching Pep Band, & Chowder Society Review, Unlimited!!! was our Stanford-style scramble band. In white painters pants, blue oxfords, orange vests, and crazy hats the band routinely skewered our opponents, their parentage, SAT scores, dental hygiene, and anything they might hold dear. It was great! Some years later the President of UVa and the Governor of Virginia grew tired of apologizing to assorted Governors, College Presidents, Grand Viziers, and just about everyone else for the Pep Band’s antics and the Pep Band was abolished.

A scene very much like this one played out at just about every game I went to:

Trip, (yes, that's his name), an athletic slightly sunburned tousled blond, is wearing paint spattered khakis, Bass Weejuns held together by white athletic tape, and an oxford shirt. He has a cigarette propped behind his year and is obviously well acquainted with the medicinal qualities of the rum and Coke in the Wahoo cup he's holding. Margize (yes, that’s her name. Really.) looks as if she stepped out of the Pappagallo catalog in a wraparound skirt with a demure blouse accessorized with a Ray Ban aviator sunglasses and gold ball add-a-bead necklace. She is using a mini L.L. Bean tote bag as a purse.

Trip: We’ll I’llllll be! How are yew?!  You're a sight for sore eyes.
Margize: Tripster!  My lord. I don’t remember a thing about last night, but when I woke up this morning I was fully clothed but wearing one pink espadrille and one green one. I was mortified! And my mouth...well it tasted like the inside of a sneaker. But then I took my Granny’s advice and brushed my teeth with Pepsodent and Jack Daniels. Bless her heart, it worked like a charm. Languidly exhaling smoke from her Merit Light cigarette (this is the 1970s, people smoke)  Who are we playing today?

Trip: Margize, we’re 1-8. We’re playing with ourselves. He quickly pulls his free hand out of his pocket. Metaphorically speaking, I mean.

Trip: Hey are we going to hook up later?

Clearly we didn’t want to win our conference championship. I’m not sure that we even wanted to win a game, well, with the exception of the contest against the Warren G. Harding School for the Mentally Bewildered. After all, he was a Yankee. Trying too hard to win at football would be the epitome of Creeping State U-ism. In retrospect it seems that we were a Division 1 team pretending that we were in Division 3. When the weather was nice everyone had a good time, and people were kept occupied until the really important time of year, basketball season. 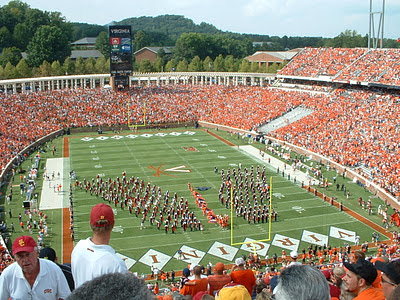 Creeping State U ism seems to have carried the day. Scott Stadium has been supersized (if you call 61,000 seats supersized) and it even has a larger name, Carl Smith Center, Home of David A. Harrison III Field at Scott Stadium. There are orange Vs painted at intervals on the major streets near the University grounds, like the footprints of a preppy dinosaur. The football team has snazzy uniforms, there’s a real band, and tickets are even required. And a recently fired (deservedly so) coach even urged students to wear t-shirts--t-shirts!!--to games. But there have been changes for the good, too. There is real grass instead of that plastic stuff that Scott Stadium used to have and a cavalier on horseback makes a dramatic entrance at the start of each game. And UVa wins more, too. I'd be lying if I said I didn't like that. 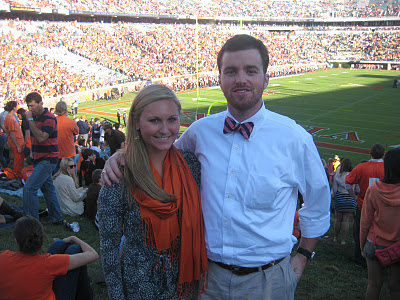 Trip and Margize’s kids may care more about football than their parents, but not enough to go to Virginia Tech or Penn State. I’m hopeful that they’ll remember that they went to college for the education rather than the spectator sports. I know that they learned the most important lesson of all: it's not if you win or lose, but what you wear to the game.
Posted by Rick Bryant at 8:18 AM