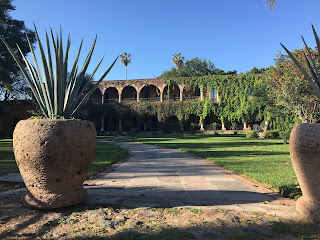 Hacienda El Carmen is the Mexican version of a Venetian villa or English country house that has been converted into a luxury hotel and spa. It’s an oasis of manicured lawns, blooming bougainvillea, and gurgling fountains. It’s separated from the dusty village of El Carmen by a high stone wall. 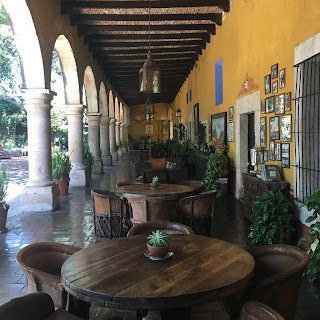 I am not bowled over very often, but wow, I was bowled over.  The place is fantastic.  It’s a far cry from my usual Courtyard by Marriott.  It was as if we were in the home of a Mexican aesthete from the 1940s where they hardly changed a thing to convert it into a small hotel. 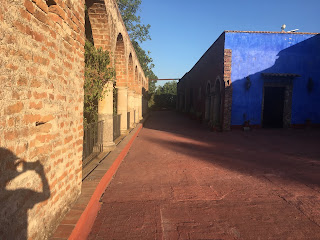 I expected to see Zorro (Douglas Fairbanks, Guy Williams, George Hamilton…take your pick) each time I turned a corner. Instead, I saw shadows. 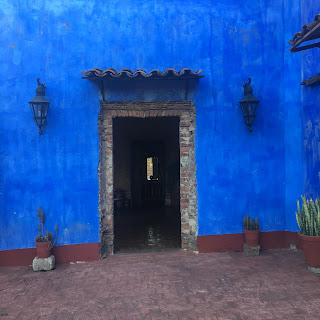 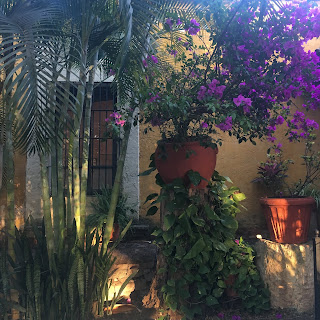 The place was all brightly colored thick masonry walls, Catholic memorabilia out the ying yang, more Spanish Colonial decorative arts than I’d seen in my entire life, with a with a touch of crazy thrown in to keep it interesting. 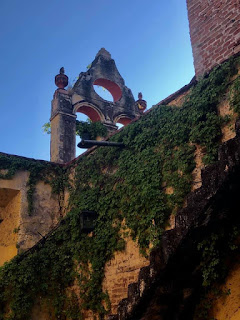 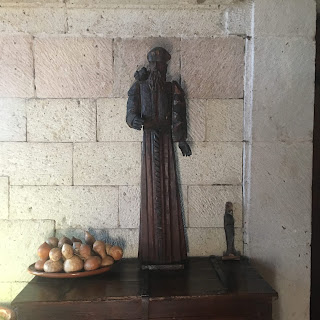 It was a Monday night, there were just a few other guests about. We could tell fart jokes all we wanted without bothering anyone. Except for numerous statues of Catholic worthies, I mean.

The fart jokes would have to wait since we had spa appointments. Did I mention that Hacienda el Carmen is a spa too?

Robyn made it very clear to us that we needed to bring swim suits so that we could go to the spa. So there I was, in my more vintage than it used to be swimsuit, from Lands End’s Paunchy Aging Wahoo Collection. A bunch of little holes in its left leg are testament to many years of wearing Stone Harbor beach tags. 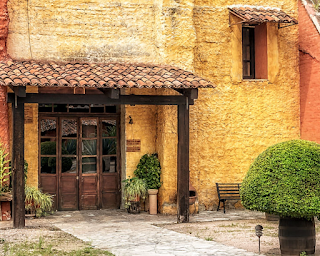 The spa was in its own building, a short walk from the big house.  In its former life, the building was a granary, but today it’s a chic spa staffed by technicians in crisp white uniforms.  We’d already discussed the available “spa treatments” so I knew which boxes to check when they handed me the English language version of the spa menu.

It will come as no surprise to regular readers of this blog that I opted for the "Fruit Exfoliation", I figured if anyone could offer a unique perspective on "Fruit Exfoliation", it would be me, especially since Jesús the male stripper from Puerto Vallarta was nowhere to be found. Interestingly enough, there was no discount for bringing your own fruit.

After the requisite paperwork was done, I met my spa Fairy Godmother, a woman of a certain age named Martha. This Martha didn’t speak English. At all. My Spanish won't get me through the Taco Bell menu. As you might guess, communicating was a challenge.

But when Martha handed me the pair of paper boxer shorts, I understood that my Lands End swim trunks, even though they were from the Paunchy Aging Wahoo Collection, were not up to her standards. But the paper shorts....they were hideous. They had to have been made in East Germany.   I put them on and joined the party in the hot tub for a soak.

When I was sufficiently soaked, Martha led me by the elbow (did she think I was going to get lost?) to our treatment room. Apparently this is a thing they do...leading you around by the elbow. Who knew?! I was feeling broadened already.

Martha—I’m not exactly what her job title is—masseuse, exfoliator, worker-over-er—was a short woman, with a grandmotherly figure, big smile, and the hands of Rosa Klebb. While she was all smiles and warmth, I had no doubt that in the blink of an eye, she could, based on ancient Aztec techniques of hand-to-hand combat, break several parts of me that I consider important, if not downright crucial.

My first challenge was to change from the baby blue East German paper boxer shorts into a new garment (and I use the term loosely) that Martha gave me.  It guarded a lot less of my modesty than the paper boxers.  This thing was as a strip of blue paper connected to a couple of loops of narrow elastic.  It was completely confounding to me, especially since it came with no instructions, at least instructions in English.

I figured that it was to cover up my nether regions but I couldn’t quite figure it out to work it. And that was how I ended up putting it on sideways.  After struggling into it, I decided that even if I had the figure of an underwear model, wearing it would have been illegal in several states.

As someone who aspires to move from geekbod to dadbod, this bit of baby blue Handy-Wipe was just not cutting the mustard as a way to protect myself from Martha’s clutches….or the other way ‘round.  I was grateful I hadn’t had a tequila or two at lunch since I might very well have decided to go with it just the way it was.

Fortunately, I had a Eureka moment and it hit me that it was an East German g string and that the strip of blue fabric went from front to back instead of from side to side. Even the right way 'round the thing's probably still illegal in Texas and Tennessee. Then again, governments in both of those states  look askance at fruit exfoliation.

When I was all situated, Martha came back in the room, put on some soothing music and proceeded to rub my skin with a wet mixture that was a cross between kosher salt and crushed Life Savers.  Then she covered me up, whispered something in Spanish in my year, and turned on the shower in stall at the end of the treatment room. When I heard her leave the room, I guessed it I was to get up and wash off my exfoliated fruitiness.

After my shower I saw that Martha had put out a new East German G-string for me.  So I put that on—the right way ‘round on the first try. When I was situated on the massage table, she came back in and slathered me with what I guessed to be strawberry Chobani yogurt.  After the slathering--and she laid it on thick--she wrapped me up in a plastic drycleaning bag and left the room. I would like to say that it was relaxing and I fell asleep as my skin was gently rejuvenated by a fruity emulsion. However, a dab of Chobani started to drip into my left ear. Argh! I was stuck. I couldn’t wipe it out since I was mummified in a drycleaning bag.

Eventually Martha returned, turned on the shower, put out a new East German G-string and then whispered something into my ear that I think meant "Get up and wash this stuff off" or “In all my years of fruit exfoliation, you’re the fruitiest.”  I just don’t know.

After I washed off the Chobani and put on my clean east German g string, it was back onto the table for a post-exfoliation massage. I'm especially grateful that Martha didn’t resort to any Aztec jiu-jitsu as she readjusted my chi.

Readjusted and exfoliated, yet still fruity enough to harbor visions of strippers from Puerto Vallarta named Jesús, I was ready for a relaxing evening of cocktails, conversation, and delicious fare on the rear terrace of the big house. It was a lot of broadening for one day: I slept like a log that night.