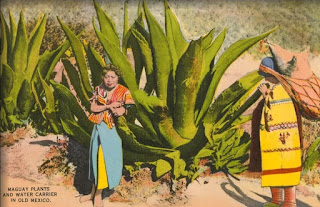 The day after our trip to Chacala, we left bright and early for an overnight to trip to Tequila. (Upper case Tequila is a place. Lower case tequila is a drink.) Paul is a tequila guy the way that some of my UVa friends are bourbon guys, or plutocrats are are single malt scotch guys. Paul appreciates nuances in tequila that are lost on my low end tastebuds.

We drove north along the coastal road for a ways—some of it looked familiar since it was the road we took to my cousin Jake’s wedding two years ago. Paul and Robyn were thoughtful tour guides, giving us the low down on places we passed.

Near San Blas, I think it was, we got on a new toll road. There wasn’t much traffic, the road was in fantastic shape, especially when compared to Pennsylvania highways.

We stopped at a rest stop to use the facilities. 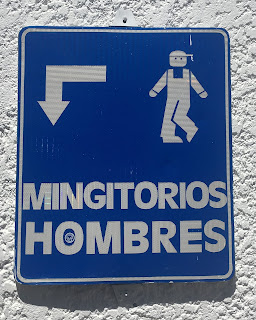 I loved the signage for the men's room. 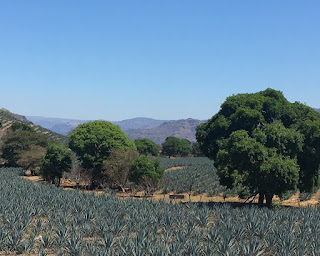 After a couple of hours, we were in a landscape of agave fields—the juice extracted from the blue agae plant is distilled to make tequila.  In my pre-broadened state, thought I’d seen agave fields between PV and P and R’s house, but those fields were pineapple, not agave.

Until I went there, I had no clue that the region around Tequila, filled with fields of blue agave, was a UNESCO World Heritage Site. Tequila has been distilled there since the 16th century and UNESCO recognizes that the region is a key part of the Mexican national identity.

The city of Tequila reminded me of medieval Italian city: built for walking, not driving, ancient buildings in various states of disrepair, narrow cobblestone streets, and thriving tourist economy.  Paul found a place to park near the city center. 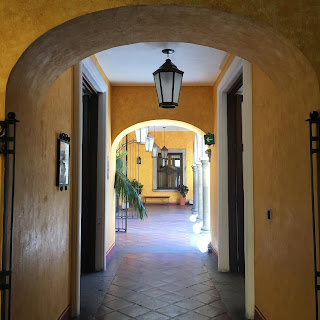 After a quick look at the swanky Jose Cuervo showroom, we headed for the main square. Paul stopped to talk to two boys who holding an iguana tied to a bit of nylon rope. After some haggling, he (or she, I don’t know how the iguana self-identified) was Paul’s for 100 pesos, about $5 American. After untying him, which took some doing, Paul and Billy walked up the street and released it at a vacant patch of land.  I don’t know if the iguana scampered away to safety or just waited to be caught again by those two boys to be sold again at the town square. 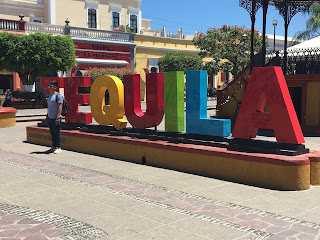 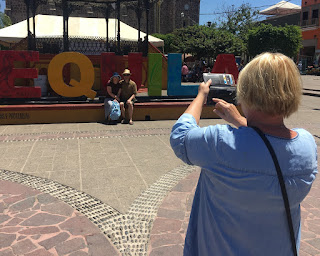 We watched people taking photos in front of the large Tequila sign and took some of our own. 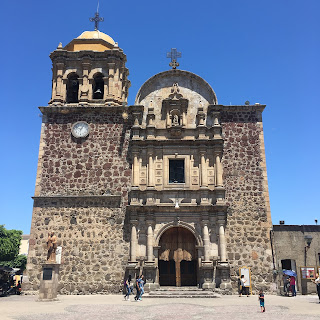 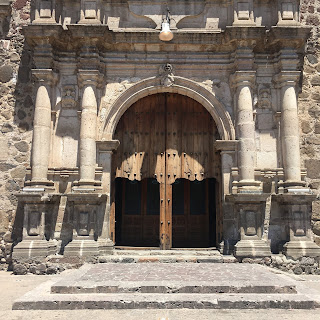 The Church of the Immaculate Conception was at one end of the square. Its exterior is quite primitive with the exception of some carved stone elements on the entrance front. (And of course, a neon cross at the very top!) 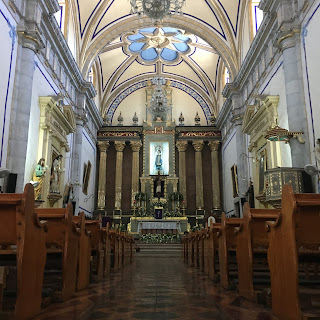 The interior is a handsome classical space with a polychrome vaulted ceiling. I was expecting bells and smells, but there were no small chapels illuminated by flickering candles. 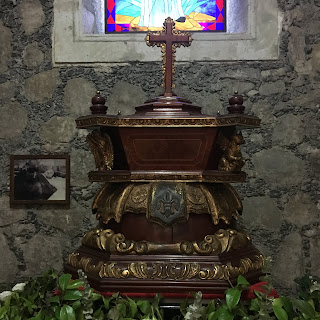 Instead, there was a memorial to a Father Toribio Romo Gonzalez, who was killed by government troops in 1928 during the Cristero War. Until that moment, I'd never heard of the Cristero War, it was a broadening moment. 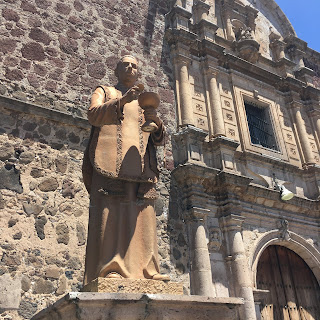 There's an even larger statue of him in the plaza in front of the church.

He was canonized by the church in 2000 and is now seen as the patron of migrants. My guess is that The Donald wants his friends the two Corinthians to beat the crap out of him.

We had lunch at an outdoor café on the square. In addition to some government function taking place under a big tent in the square, there was a performance in the square too. 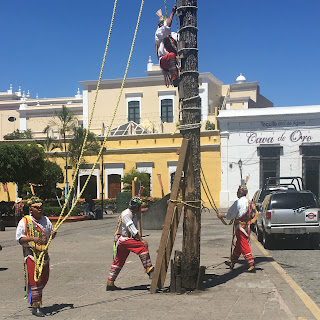 The performers were seven indigenous people, aka locals, decked out in red trousers, white smocks with floral sashes and lots of fringe, and hats that looked as if they were made from repurposed maracas.  They danced around what looked like a May pole, while one of their number played the drums and another the pan flute. Of course, I’ve never seen a real maypole in real life. I’ve seen plenty of poles, some of them in the month of May. But none were anything like this.

The dance around the maypole lasted long enough to make you think that you’d never, ever, get their indigenous ear worm out of your head. 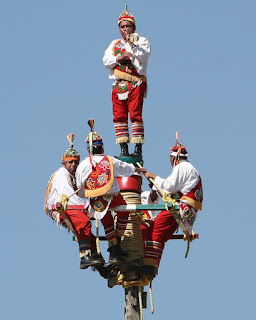 At the end of the dance number, five of them climbed up the wobbly pole, which was perhaps 40 feet tall. At the top of the pole, four sat on a rickety looking frame, while the fifth stood atop the pole played the drums and pan flute simultaneously. Clearly this was not a job for President Gerald R. Ford, who, according to Lyndon Johnson, could not walk and chew gum at the same time.

Four of the men wrapped ropes around their legs and stepped off the rickety frame and twirled around the pole till they reached the ground. It was a circus act without a net. I was glad I’d picked different parents than those guys.

According to Wiki, it's called the Danza de los Voladores. 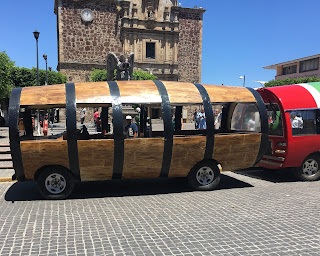 You could take a tasting tour of the area in buses shaped like a red pepper or a tequila cask, but I'll have to wait for the next visit. Hacienda Carmen was the next stop on our itinerary.
Posted by Rick Bryant at 5:02 PM