After Billy and Alicia arrived, we took a cab to the bus station, a trip of just a couple of miles.

We got to there just in time to buy tickets and catch our bus.  We were headed to the town of Las Varas—a two hour bus ride—where Paul and Robyn were going to meet us. We were the only Anglos on the bus, which eventually became standing room only.

The bus seats were roomy--the ride was more comfortable than any bus I've been on in the U.S. And, interestingly enough, there were no young women wearing sweatpants and carrying a pillow, something I've seen on every Megabus ride I've taken. At one stop, a food vendor walked through the bus selling cellophane bags of what looked like potato chips and a bunch of different sauces with which to customize them. As snack foods go, they looked....interesting.

We disembarked in Las Varas right on time. 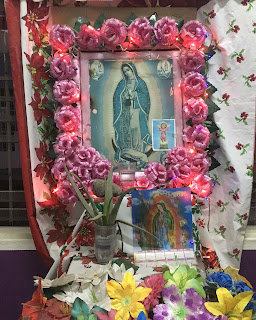 I barely had time to photograph the blinking shrine at the store that serves as the bus stop when Paul and Robyn arrived as promised.  In short order, we were on the way to their house. It’s about 30 minutes from Las Varas.

Since we were all peckish, we stopped for dinner at a little place in Zacuaplan.

Zacuaplan is a farming community, with shops, car repair places, and a cheese shop that Paul and Robyn swear never has any cheese. 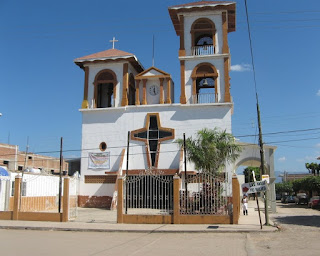 In the center of town, there’s a large church that looks as if it were designed by a committee. It faces a small park in place of the traditional town square. 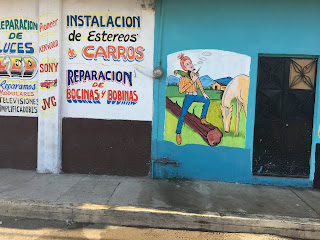 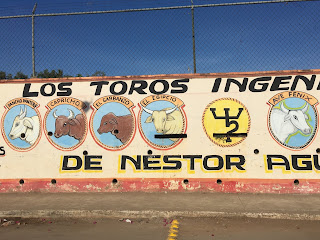 The town doesn’t have a lot of curb appeal, but it’s but brimming with authenticity. If there was any sort of chain store or franchise outpost there, I didn't see it. 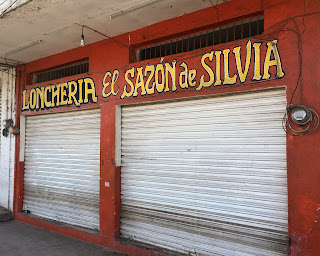 Paul pulled over at the Loncheria El Sazon de Silvia, one of the few places open at that time of night. It wasn’t a place people go to for the atmosphere; if it were a food truck, it would have been missing a fender. In fact, the State College Board of Health might have sent in a SWAT team to close the place for a hairnet violation.

But even without a hairnet, the woman at the grill made us a delicious dinner. Perhaps I was just ravenous, or perhaps it was the super tasty salsa on the table, but my tacos were spectacular. Plus, since I ate them with a knife and fork they gave me the opportunity to demonstrate my lack of travel-related broadening. I didn’t need to worry about drinking the water, Billy walked down the street and brought back cold beer.

As I sat there at a table on the sidewalk, still wearing my blue blazer, eating my tacos with a knife and fork, drinking a cold beer, I wondered if I had been transported into a W. Somerset Maugham story.  Or would that have been a Graham Greene story?

My friend Martha would have known who I meant. Unlike me, she's probably knows all about those  English authors who wrote about fish-out-of-water Brits in distant corners of the crumbling Empire.  I’m as thick as a plank when it comes to anything literary.

I was consoled by the fact that Mr. Bass Pro Shops probably didn’t know the difference between W. Somerset Maugham and Graham Greene…though by this point he might have known something about strippers named Jesús. I just had a feeling.
Posted by Rick Bryant at 4:44 PM