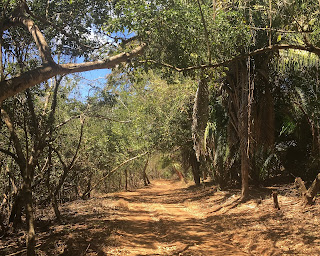 On my first full day in Mexico,  Paul took us on an four-wheeler excursion, through the jungle and onto the beach. A. and I stood up on the bed, behind the cab as we held on for dear life, going down and up paths that, at times, I thought were impassable. We checked out giant termite nests, marveled at the flora, and saw where a lava flow met the ocean zillions of years ago.

My favorite part might have been buzzing along a deserted beach; it was a blast. 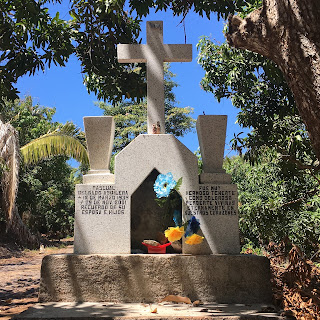 Near the end of the trip, we stopped so I could check out a trailside shrine. Someone had dropped dead at that very spot in November 2001. I think these shrines are fascinating, and in this part of Mexico, they're practically ubiquitous. I can't imagine how long a trip I'd need if I stopped to photograph each one. 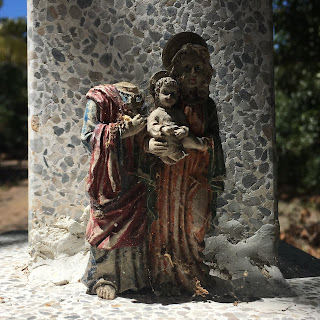 Someone had placed a small sculpture of the Holy Family at the base of the cross atop the shrine. Joseph was missing his head. Do you think it was from the scratch and dent rack at the religious ephemera store? 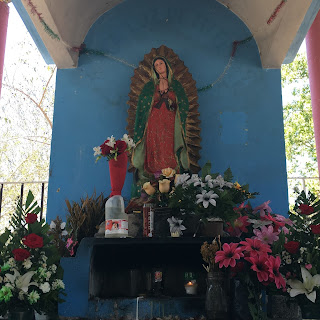 We stopped by another, larger shrine, on the main road, closer to the house. Paul pointed out to me that roadside shrines were often near a curve at the end of a long straight stretch of highway. Drivers tend to get a little aggressive on the straight stretches and then lose control when they have to make the corner. Death doesn’t take a holiday: hence shrines. 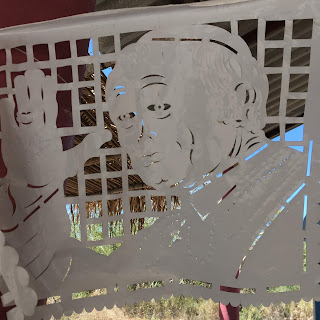 In addition to a little hut filled with a low rent funeral home's worth of plastic flowers, this shrine was decorated with plastic flags in the image of the Pope. I am not entirely sure which Pope it’s supposed to be, but don't think it was any Pope Urban VII. Has anyone ever taken the idea of Pontifical Flashcards to the venture capitalists on Shark Tank...? 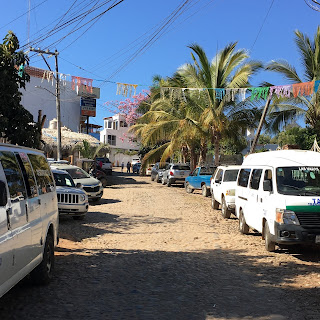 The next day we drove to the small town of Chacala to have brunch and hang out at the beach with two of Robyn and Paul’s expat friends. 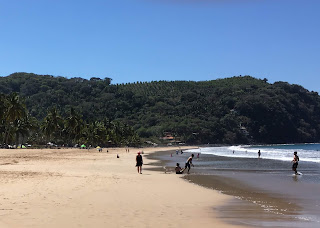 Everybody forgets about Chacala!  This small little fishing village (reminiscent of an older Sayulita) sits 9 miles off the main highway, just a little north of La Peñita.  Perhaps the short drive is what keeps people from discovering this gem of a town.  This community sits at the north end of a gorgeous, expansive, half moon bay. 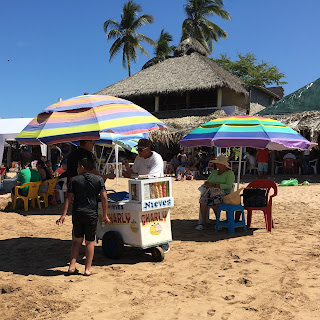 I don’t think that anyone who’d been to Chacala could forget about it. The town seemed like a microcosm of everything I’d seen in Mexico. The town was a mix of old and new, with rich and poor right next to each other. There were families, musicians, food vendors, tchotchke sellers, and even some commercial fishermen at the beach. 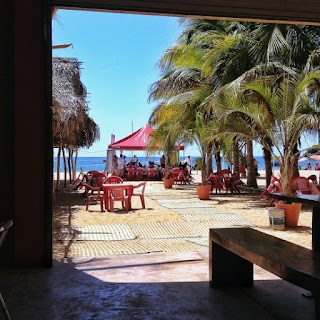 We ate at a beachfront restaurant. After a super brunch, we had time for the beach and exploring. There was a dock for the fishing fleet at the north end of the bay and a swanky resort hotel at the other. It was so swanky that the sandwich board on the beach advertising the daily specials was in English. There were a couple of bands playing on the beach too. Those guys should keep their day jobs. 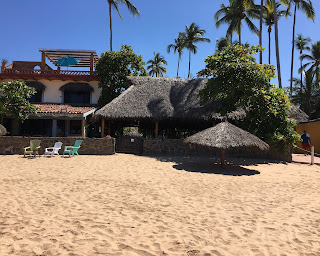 Sure, Chacala is off the beaten path. But to me, at least, that was part of its charm. What it's lacking in male strippers named Jesús it has in a beautiful beach, fishing, fun places to eat and drink. Oh, and a bunch of really cool people. 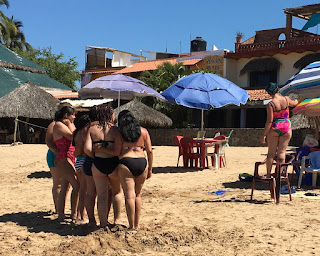 Chacala is fantastic. How could anyone forget it?
Posted by Rick Bryant at 4:36 PM