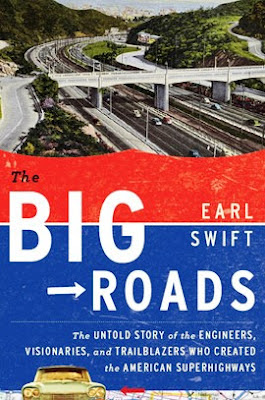 There were plenty of non-fiction authors at the Virginia Festival of the Book, though most of their presentations seemed to have happened before I got there. I did, however, have the good fortune of spending some time in the Charlottesville City Council chambers (easily Virginia's ugliest) attending a talk by Earl Swift, the author of The Big Roads, a history of the interstate highway system. I know what you're thinking, "I need to finish that utterly fascinating history of the Waring Blender before I start on something else..."

I haven't started The Big Roads yet, but I think it might surpass the history of the Waring Blender. Highway building attracted some fascinating characters--like the mover and shaker who required his wife to call him "Chief". Interstate highways have not only had an enormous influence on how we travel, but also on how we live and where we live. Interestingly enough, the Interstate Highway System was pretty much all a done deal when President Eisenhower came along. Calling it the Eisenhower Interstate System is a case of a politician getting credit for something he didn't do. Pretty shocking, eh? 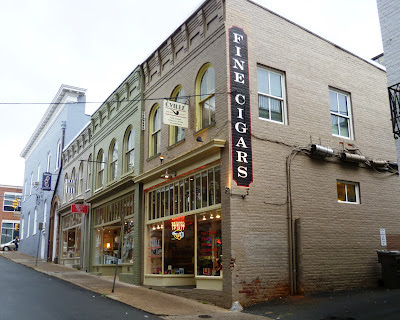 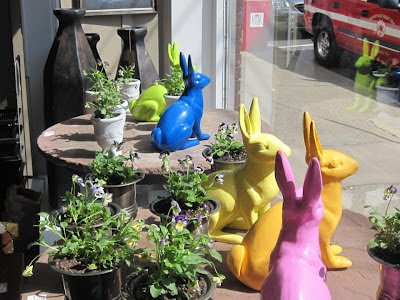 Between sessions on murder and highways, I took time to provide economic stimulus to central Virginia by visiting a number of locally owned shoppes. How could I not stop in a store with large and colorful peters in the window?  The store was called Artifacts and it was the Charlottesville version of Aero Studios in New York City. They had lots of cool stuff and I bought some great cocktail glasses. Actually, by my way of thinking, any glass is a cocktail glass. 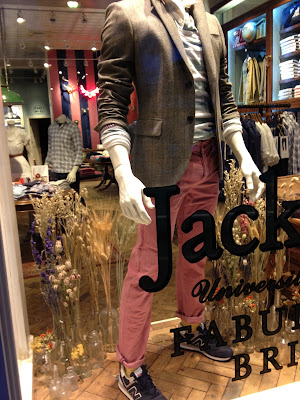 C-ville is definitely the place to go if you want to buy some pink skinny jeans. For men. Jack Wills University Outfitters can get you all decked out. The pink jeans are a nice change from the standard PSU raiment of a hoodie and sweatpants. 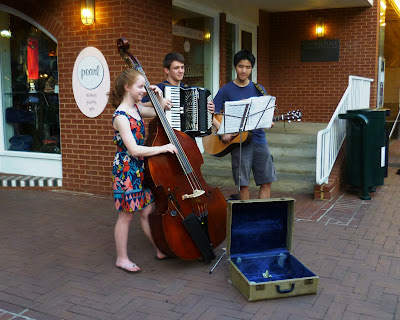 There was plenty real live music to shop by on Charlottesville's downtown mall. It's hard not to like a trio of band geeks having a good time on string bass, guitar and accordion. 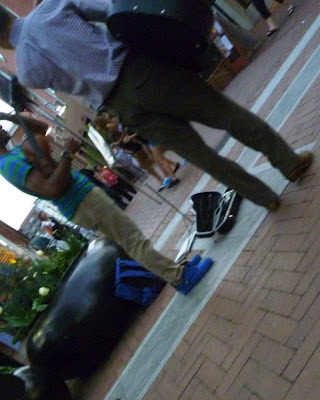 There was also a kid in bright blue sneakers and coordinating blue and green striped t-shirt playing Mendelssohn on the solo violin. 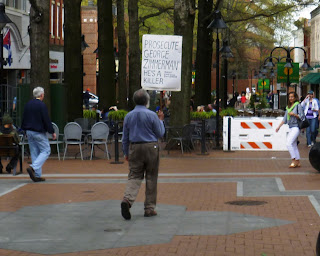 There was vocal music, too. This man was exercising his first amendment rights by carrying his picket sign and signing This Land Is Your Land at the top of his lungs. I don't know when I saw an old-fashioned picket sign on a stick last. 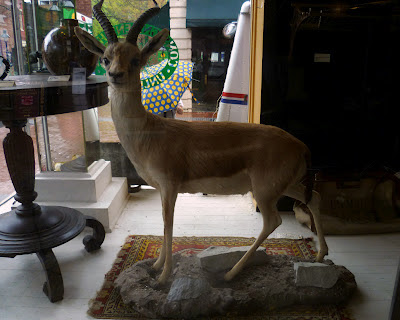 Some guy finally listened to his wife (or husband) and took his mounted gazelle to The Consignment House. Presumably he needs to make room for a coffee table made out of a wagon wheel or an étagère filled with Precious Moments figurines. If it the gazelle had a cigarette hanging out of its mouth I might have bought it. 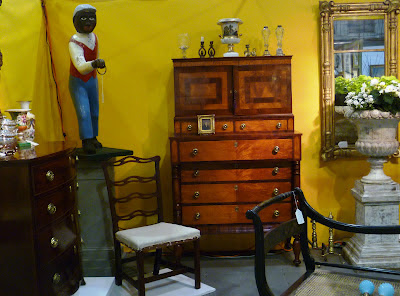 f
There was an antique show in the arena that's just across Charlottesville's downtown mall from Omni Hotel, the home to most of the book festival. The show was a benefit for Preservation Virginia, formerly known as the Association for the Preservation of Virginia Antiquities. Founded in 1889, Preservation Virginia was the first statewide historic preservation organization in U.S. It is responsible for the preservation of lots of cool stuff, including Jamestown, the site of the first permanent English-speaking settlement in the New World. So I looked upon it as my civic duty to go. 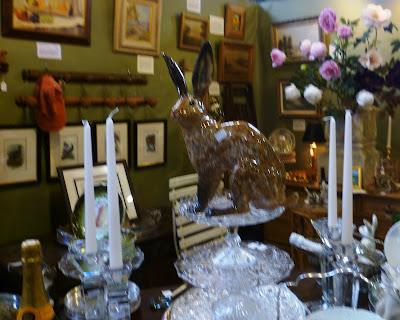 The show featured about fifty dealers and they were selling all the furniture and accoutrements that you would need to furnish an English country house. Antique oriental rugs that won't show the occasional episode of dog effluvia? Check. A lovely Chinese export porcelain tater tot dish? Check. Ancestral portraits? Check. Regency dining tables that seat more people than I have readers? Check. Just add a carload of chinless, freeloading relatives with bad teeth and a taste for Benny Hill to all this instant heritage and you'll have an authentic English country house experience.

There was some nice stuff, but most all of the stuff was out of my league, price wise. What's an extra two zeros among friends?  I saw a great duck hunting painting but it wasn't $26,000 worth of great.

Sunday morning, after we were done being Festive,  my friends and I were looked for a special breakfast spot since it was Karen's birthday. My go-to breakfast spot, The Tavern, formerly known as Sarge's--Where Students Tourists and Townspeople Meet (or so it said in a sign painted on the roof), recently closed after a zillion years of serving hotcakes.  So it was time for someplace new. Hence The Pigeon Hole on Elliewood Avenue. 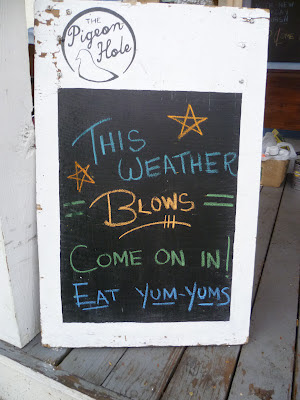 The Pigeon Hole is in a tiny royal blue stucco building that for years was the home of Martha's Cafe. I think I ate enough asparagus quiche in that place to float a battleship. I know, I know, strictly speaking battleships do not float on asparagus quiche. But if they did.... Our waiter was a tall Ryan Gosling doppelganger, with a hipster haircut. He was wearing blue shorts and a plain formerly white v-necked tee shirt--next to the turtlenecked dickey, one of my least favorite clothing items of all time. He was so mussed and casually dressed that I thought,  Holy crap, we just got this guy out of bed!

Whatever our waiter was lacking in sartorial splendor he made up for in the personality department. After several trips to the table, I commented that he'd never told us his name. He replied that it was Andrew. I told him that I heard it as Amber and he chuckled and said, "Well, actually my name is Holly." Chuckles ensued. There were perhaps five people working there, and he was the only one who did not have a prodigious number of quirky tattoos on display.

The front dining room was so small that when the too-tanned parents and their laxer son came in and sat town, they were practically at our table. They wanted the Eggs Benedict but with the hollandaise on the side. 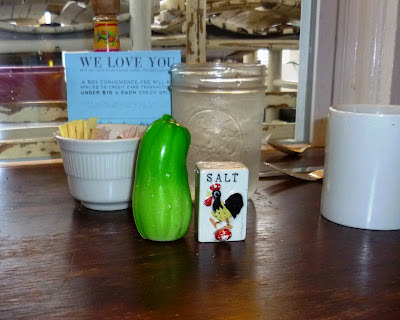 Everything in the place is deliberately mismatched. That might not have worked had the food not been delicious and the service epic. Epic is not a word I throw out casually. A card on the table recommended a 20% tip if the service were "epic". It's not every day that delicious food is served by a Ryan Gosling doppelganger, so I went with the "epic" tip. I highly recommend the huevos rancheros with grits. 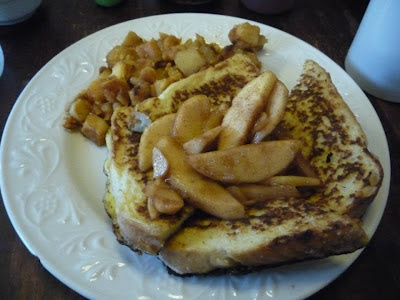 Soon enough we had eaten our fill and were ready to point the rental car back towards the Mason-Dixon Line. I won't be back in Charlottesville for a while, but I'm hoping that when I do that gazelle is still there. If it's taken up smoking--it's not hazardous to the health of a stuffed gazelle--he might just be coming home with me.
Posted by Rick Bryant at 4:10 PM