Friends in Low (and High) Places 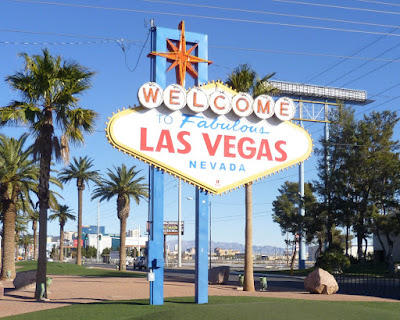 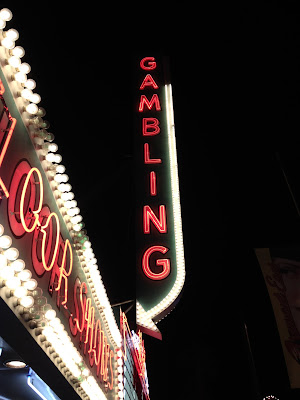 I’d never even been to a convention in Las Vegas before Tracy and The Other Rick moved there. Las Vegas, “Who needs it?” I thought.  But I went to visit them once, had a blast, and have been back several times since. I’m sure I’d have a super time visiting Tracy and The Other Rick if they lived in Duluth, Minnesota, but if I had my druthers I’d rather they live in Vegas than Duluth. No doubt Duluth has many wonderful sights and attractions (e.g. Lake Superior and Lutefisk World) but alas and alack, they’re on hold until I retire and start spending my time driving around the country in a motor home. 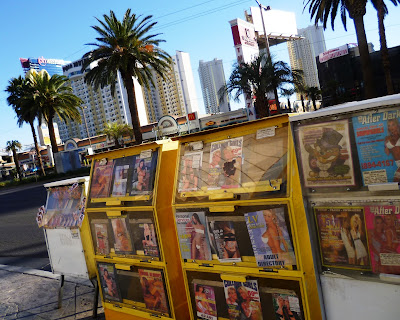 In my trips to Vegas since Tracy and The Other Rick moved there, I’ve done lots of the usual touristy things like Hoover Dam and the Liberace Museum. (It’s a crime that it’s closed.) But there are still plenty of things to see and do and there's oodles of local culture to absorb. 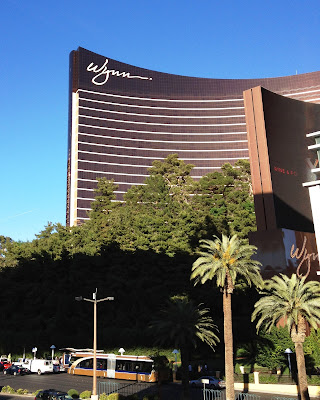 Unless I’m staying at The Other Rick and Tracy’s house in the suburbs, I stay at the Wynn. As my father used to say, you don’t go on vacation to save money.  The Other Rick is an executive there, and I believe in doing business with people who do business with you. I have a long way to go to pay them back for all the times I've tied on the feedbag at their house. 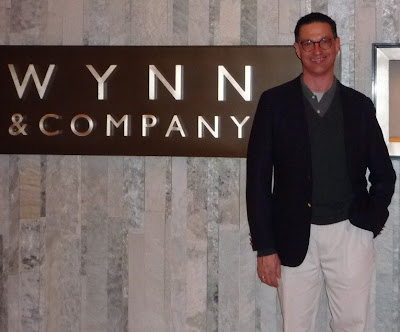 Lots of casinos seem to have a theme—The Paris, New York,New York,  Caesar’s Palace, etc. but the Wynn’s theme is well, it’s the Wynn.  And believe you me, that's all the theme it needs. Roger Thomas, Steve Wynn's interior designer (just profiled in The New Yorker) pulled out all the stops to create what feels like a 21st century cousin of West Virginia's legendary resort, The Greenbrier. 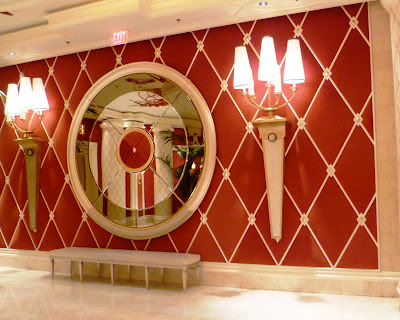 The spaces are grand, the décor is within a gnat’s eyelash of being completely over the top, and the place is maintained within an in inch of its life. There are plenty of Dorothy Draper elements--she designed The Greenbrier--such as dark walls quilted in diamond motifs and oversized white baroque plaster moldings.

Since the Wynn isn't low end, you don’t have the feeling most of the casino patrons have hawked their government cheese in order to feed a slot machine hoping for the big payoff which will allow them to move out of the trailer park, buy a big boat, and pay for a decent criminal defense lawyer for their good-for-nothing stepson, and ditch the old lady for a new, firmer, and with luck, augmented model. Vegas is way more fun for me when I can ignore all that real life stuff.

Saturday, The Other Rick arranged for Tracy and me to see Garth Brooks in concert at the Wynn.  I’d seen him in concert once before and was bowled over by what a great entertainer he was, so I was delighted to be going back. 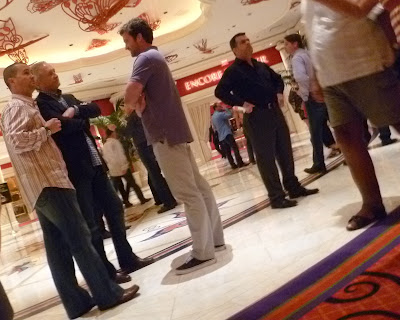 The crowd was well dressed, which in Vegas encompasses every fashion crime known to man and then some. More on that later. The men wore every sort of get up imaginable, from nice western wear—pressed jeans and western shirts—to shirt tails fashionably untucked, riffing on that great fashion icon, Ferdinand Marcos. Lots of women wore impossibly high shoes and dresses so short and so tight that they looked like Technicolor sausage casings.

The theater was intimate (esp. when you are in the front row) and it was plush in a way that reminded me of the theater at the Hearst Castle. The seats are the right size and you don't feel as if you's sitting on top of your neighbor. Everyone was SO excited to be there.

We had seats in the front row, right in the middle. (Thank you again, Rick!) When we sat down the seats around us were empty but that didn't last long. An older man doing one helluva impersonation of a drunken fraternity boy and his shovel-faced non-trophy but still not age appropriate date soon sat next to Tracy. Tracy remarked to me that he was going to turn out to be a jerk and she was right. He knew all the songs better than Garth and the usher had to come over and tell him to put a lid on it. Fortunately for us, he and his shovel-faced non-trophy but still not age appropriate date dashed out during the first standing ovation. They missed the encore but presumably beat the traffic on the way to the bar.

A well-dressed, cute, young married couple sat next to me. She was a petite thing in a knee length flowing floral silk dress and expensive vintage dress cowboy boots. The Boy Next Door was thin and had a boyish face and a vaguely olive complexion. His short dark hair needed more (or better) product and he wore a suit, fashionably sans tie.

Maybe the Boy Next Door just liked my hair or glasses or pink oxford, which may be the one clothing item no one ever wears in Vegas. All good possibilities. Or perhaps he wanted to know where I got my fetching brand spanking new green (yes, green) suede bucks. (Brooks Brothers). Then again, maybe he really liked the Toby Keith song, Who's Your Daddy? No matter what the reason, I had the distinct feeling that this marriage was not going to work out, if you know what I mean.

Mark my words, it won’t be long until he’s living in an expensive Design Within Reach-esque apartment in the gayborhood with his new partner Bruce, an underwear and men's accessories buyer at Neiman-Marcus. They’ll share their tasteful 3,000 square feet digs with their golden-doodles Dow (short for Dowager Empress Tz’u-Hsi) and Jones (as in Grace Jones). The B.N.D. will be the personification of his law firm’s commitment to diversity, and as a dedicated barefoot runner who takes off his shirt every time he has to run farther than the Xerox machine, he'll do great things for his law firm’s pulchritude quotient and scores in the bar association's citywide fitness challenge.

Back to the concert. It was great.  Actually, it was fantastic! Way, way, better than great! Garth obviously loves to perform. Everyone knows he’s one of the all-time great singer songwriters, but he’s also a great storyteller, with superb comic timing. He takes the audience through his life story, mostly in music, touching on George Jones and Merle Haggard, Simon and Garfunkel, James Taylor, the Eagles, dive bars in Stillwater, Oklahoma, and his mother driving a P.O.S. Chevy Chevelle, going down Oklahoma highways like  a bat out of hell.

An added bonus was that his wife, Trisha Yearwood, unexpectedly came out on stage and sang a couple of numbers with him. They’re obviously quite in love, and she’s got a voice that just won’t quit.  I’ve always wanted to go to a concert where they announce that someone (say, Bette Midler) is in the audience and she comes up on stage with the scheduled performer and sings a couple of numbers. This was as close as I have gotten to that. It was great music and great theater.

At the end of the show, Garth left the stage and the crowd was on its feet in an instant. He came back and led the audience in Friends in Low Places which, of course, everyone knew by heart. It’s been sung at a billion fraternity parties, every bar at the Jersey shore, and plenty of wedding receptions where they'd run out of food but don't come close to running out of booze.
We had scarcely finished singing when the house lights came up and The Other Rick appeared and led Tracy and me to a door at the side of the stage where he entrusted us to one of the house staff who was to take us backstage to meet Garth and Trisha. She asked Tracy and me how we liked the show as she led us down a long, antiseptically clean hallway deep into the bowels of the hotel. I wouldn't have been surprised had we passed a doorway marked “Undisclosed Location. Dick Cheney. Knock Before Entering.”

We made a left turn and we found ourselves in an anonymous lounge sort of room. In a half a sec, someone said “they’re ready for you” and our guide took us across the hall, unlocking one of those weird push button combination door locks they have on data centers in hospitals.

The door opened and there, in a room furnished with leather sofas and a big flat TV with the hockey game playing were Garth Brooks and Trisha Yearwood. We introduced ourselves (they already knew Tracy) and they invited us to sit down and chat. Garth asked me if I wanted a beer and I said sure, and the next thing I knew I was drinking an Amstel Light. We chatted about his playing the Grange Fair eons ago and I mentioned that my sister had seen him near Elk City, Oklahoma even before that. 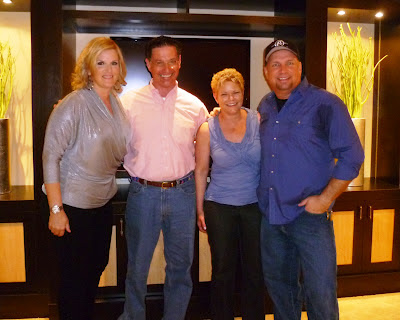 Amazingly we didn’t talk about how Tracy and I met in the 7th grade math class and all the related topics that arise out of that. Garth and Trisha were warm and gracious and as nice as you could possibly imagine. After a while Garth mentioned that my phone must have a camera and I said I had an actual camera. One of his entourage members snapped some photos. Tracy said "Rick, you didn’t say what you always say, 'Say sex not everyone likes cheese!' and we had a couple of laughs about that.  Garth Brooks shook my hand and Trisha gave me a big hug. And that’s how Tracy and I came to have another story to share with our lunch table at our next high school reunion.

After we left, I looked at my watch. It was 10:10, way too late to call any of my friends back East. So for an evening at least, this was something that happened in Vegas that actually stayed there.