I went to York the other day for a meeting. I don't go there with any frequency. I mostly drive by on the Interstate en route to Baltimore. I say to myself, oh, there's the Harley-Davidson factory and then enjoy the sight of the rotating weightlifter sign at the York Barbell factory-slash-Weightlifting Hall of Fame. I always mean to stop at the Hall of Fame, but it's still on my to-do list. 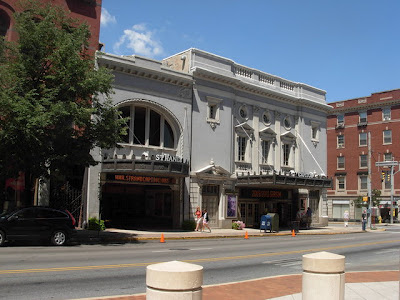 My meeting was at the Strand-Capitol Performing Arts Complex. The complex is made a former 1920s vintage movie palace and an adjoining smaller vintage theater that have been adapted into venues for live entertainment. It's quite grand--there's nothing quite like an old movie palace. It looks as if they bring in some great performers, too. This year they're having performers as varied as Bruce Hornsby and David Sedaris. And, of course, lots of folks I've never heard of. 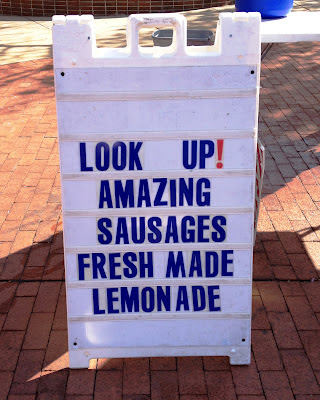 This sign was near a food cart in York's central square. I never really thought of sausages and lemonade as being natural compliments to each other. 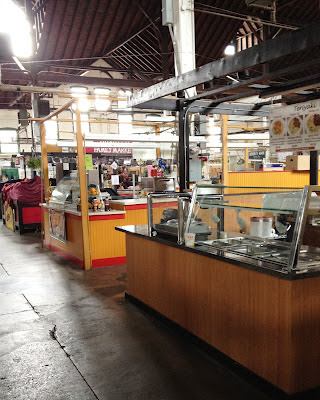 York has a nifty central market which, unfortunately, was closed the day I was there. 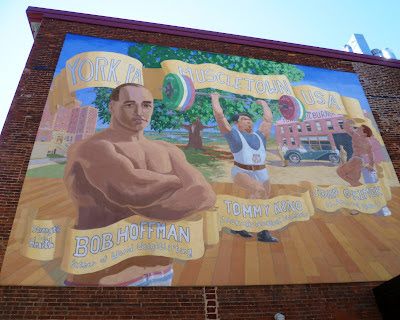 The parking garage across the street from the Strand-Capitol overlooked a mural that would be more at home in West Hollywood, California than in York, Pennsylvania. The large work of art, in sort of a post Paint-by-the-Numbers style, celebrates York's place as Muscletown USA. During my few trips to the York metro area, it's never looked like the Dutch Country version of Muscle Beach to me. But what do I know?

In case you are wondering, it's just 36 miles from Muscletown USA to Chocolatetown USA and then another 497 miles to Hitsville USA.

The figures in the mural are Bob Hoffman, Tommy Kono, and John Grimek.  They are framed by the York YMCA (no Village People visible) on the left, and on the right, some guys lifting two other men sitting in what looks to be an MG TC parked in front of York Oil Burner, the home of Strength and Health Publications.

Actually, the car looks as if it's levitating, so perhaps it's a reference to the flubber powered Model T in the Fred McMurray movie The Absent-Minded Professor. I know I could bench press a helluva lot more than I can now if I had a little flubber at my disposal. But I digress...

Tommy Kono, America's greatest weightlifter was an asthmatic kid who spent part of his childhood in an internment camp for Japanese-Americans during World War II. He won gold medals in two different Olympics and held lots of other weightlifting records.  Fyodor Bogdanovasky (you just knew he was going to come up sooner or later, didn't you?) of the Soviet Union once said of him, "When Kono looks at me from the wings, he works on me like a python on a rabbit." Fyodor had quite a way with the simile, didn't he?  Interestingly enough, this look (along with a different kind of python reference) was also employed when The Village People were hoping to enjoy the company of others at the YMCA.

John Grimek Mr. America 1940 and 1941, was called the "Monarch of Muscledom" and was the only undefeated bodybuilder ever. It would take an undefeated career to live up to the that title!

During my next trip to York I plan to drive around looking for a mural about 98-pound weaklings having sand kicked in their faces. I'm sure there's one someplace.