Going Out With Style

Altoona’s Jones Funeral Home isn’t the only cool funeral home I’ve run into. The Fred F. Groff Funeral Service is another one of my favorites.

It’s located in Lancaster, in a not all that interesting block of West Orange Street. Its neighbors are typical Lancaster row houses. The nicer ones are red brick with green shutters and white trim. They lead you to think of our Found Fathers hanging out within, thinking deep thoughts. The less nice are Permastone. They cause you to wonder if the scowling fat woman in a house dress sitting on the stoop smoking a cigarette is a permanent fixture. 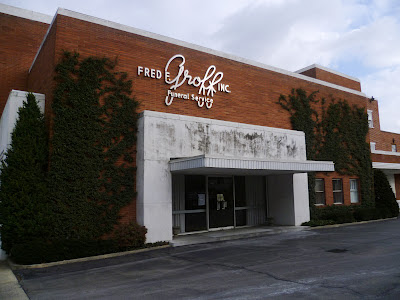 While the Groff building is red brick with white trim, just like lots of buildings in Lancaster, it’s made from longer, slimmer Roman brick, not the standard American brick, and the white trim isn’t painted wood, it’s white marble.  As Emeril Lagasse would say, the architect definitely kicked it up a notch. And it’s not a Georgian or Federal style knockoff, it’s modern, or rather, Moderne, an asymmetrical composition of mostly windowless rectangular forms with projecting white marble entrance pavilions. 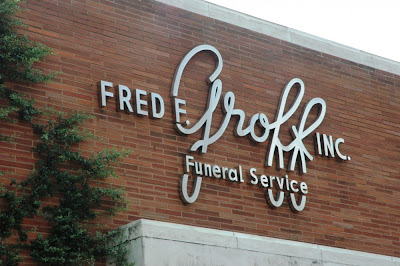 The building is quite handsome, but the aluminum sign, Fred F. Groff Funeral Service, Inc. (no, it’s not a funeral home and it’s definitely not a mortuary) really puts the place in the big leagues.

I can just see Fred F. Groff himself saying to his architect (Henry Y. Shaub, in case you were wondering), “I like those logo signature signs that they have at Altman’s, and Wannamaker’s. And at Lord & Taylor, too. Do something like that, but more modern. Oh and make it big enough so that my mother can read it. Without her glasses.” Hence the great aluminum letters, with large f’s that look like bows on kids’ shoelaces. 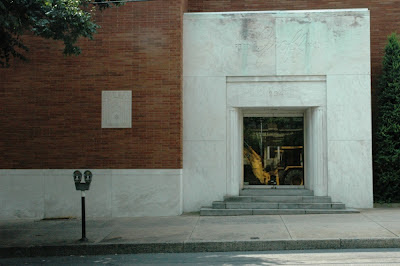 I never thought the building looked like a funeral home.  I always thought it looked like a high end tchotchke shop, like Gump’s in San Francisco. My uber-cool friend Richard thought it looked like the headquarters of an upscale furrier. Once again, he’s right on the money. I can just see Milburn Drysdale in the Groff building wringing his hands complaining about the prices as he paces back and forth while Mrs. Drysdale takes her time trying on a full length blonde mink coat.  Miss Jane Hathaway stands at the ready outside, eager to take The Chief to the Clampett mansion in her shiny red Chrysler convertible. 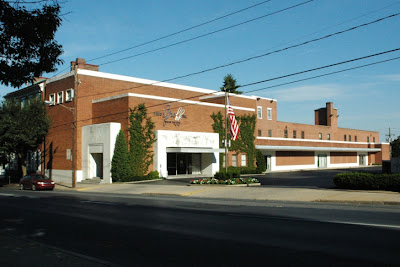 The stylish front of the building faces the street and the parking area, while the utility wing of the Groff building stretches out toward the back of the lot like the servants' wing of an English country house. 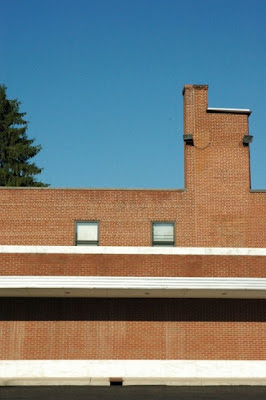 That’s where the business end of the funeral service takes place. Embalming. Casket storage. Washing and waxing the hearses. Rehearsal rooms where funeral director trainees work on their lugubrious expressions. And a laundry where they iron those “Funeral” flags for the cars in a funeral procession.

I had a chance to go to a service at the Groff funeral home once, years ago.  I was rather looking forward to it, too. Not because I had tons of feelings to share about the dearly departed—I hadn’t actually met him. Likewise, it wasn’t because I look swell in a dark suit and love using the term “laid out” in conversation. 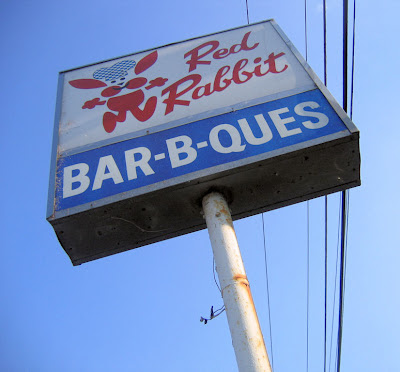 Unfortunately, on the way to the funeral I had car trouble. The gonkulator on my Volkswagen crapped out. My car went from motoring along to sputtering when I was in single lane bumper-to-bumper traffic in a construction zone. In a flash, my car was as dead as the main attraction that day at Fred F. Groff. A construction zone is never an ideal spot for a car to conk out. Naturally, it took more than some swearing and the laying on of hands to make the car functional again. Consequently I missed the day’s funeral and my chance to see if the innards of the building were as nifty as the exterior.

When it comes to the interior, fantasy is probably better than reality. The most likely case is that the distinctive funeral parlor smell that’s a cross between a florist’s shop and a taxidermist’s studio would smack you in the face as soon as you open the building's thick glass doors. The public rooms of the Fred F. Groff Funeral Service no doubt look like every other funeral home, with some hideously furnished, dimly lit, thickly carpeted rooms, and a large Olan Mills-esque color photo portrait of the founder in an altar-like arrangement in the hallway. There the standard elements would be in place—tasteful enough silk flower arrangements, some pamphlets on ‘pre-need planning’, and a guest book on a stand. If you cock your head and listen closely, you might be able to hear Tennessee Ernie Ford singing hymns in the background.

I hope that no one I know is playing in the big room there any time soon. As much as I want to see the interior of the Groff building, I’m content to wait until someone turns it into the fur salon that it always should have been.
Posted by Rick Bryant at 5:28 PM