I went to Pittsburgh last weekend. I hadn't been there in some time. I'm old enough and go infrequently enough to be surprised all over again that there aren't steel mills in the spots where I remember them. The UMPC sign atop the US Steel Building still comes as a surprise too. We used to be a country of large corporations that manufactured stuff. Now we're a country of large corporations that manage our health care. I'm not entirely sure that counts as progress.

State College is fairly bombarded with news of the Stillers and Pens (not so much the Buccos; they stink) and we tend to think of Pittsburgh in terms of sports and still mills and the super geeks at Carnegie-Mellon, the only school in America where you can major in bagpipes. One of the funniest things I ever heard about Pittsburgh was that someone called it the straight San Francisco. That made me smile, since I'm fairly certain that no one has ever called San Francisco the gay Pittsburgh. 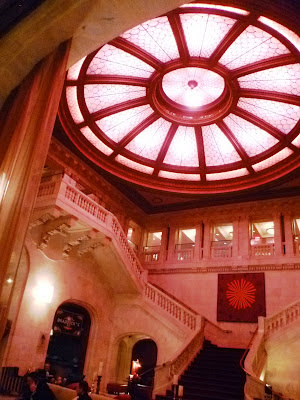 I stayed at the Renaissance Hotel, which was designed by Grosvenor Atterbury, more famous as the designer of Forest Hills Gardens in New York City. The lobby space is great, but most of the decor is Kimpton-lite; apparently the Marriott family of hotels does not approve of the generous use of animal prints or the hiring of cute and flirtatious yet sexually ambiguous front desk staff. The hotel bar is called Braddock's. General Braddock blundered his way into a memorable defeat (not to mention his own death) in the French & Indian War. He's definitely a guy who needs to have his name on a bar! Whatever happened to naming stuff after the old Pittsburgh standbys....H.J. Heinz, Andrew Carnegie, and Barbara Feldon? 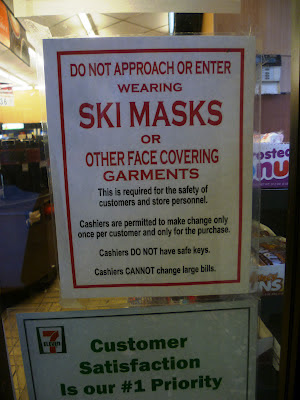 My friend Chuck and I stopped at the 7-11 near our hotel. Does 7-11 management really think that people in ski masks care about the rules against wearing one in the store?  But hey, customer satisfaction (except if you're wearing a ski mask) is the store's #1 Priority. 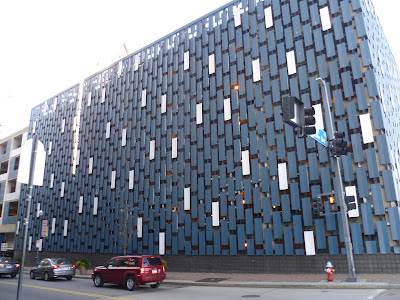 The faux mid-century modern Fort Duquesne and Sixth Street Garage was across the street from the hotel. According to the Pittsburgh Parking Authority, the garage has an "award winning central lobby." Apparently this award from from the Parking Garage Central Lobby Design Association of Pittsburgh, because I couldn't imagine who else would give the lobby there a second look. It was strictly "meh", especially if they're trying to make you think that Don Draper parks there. 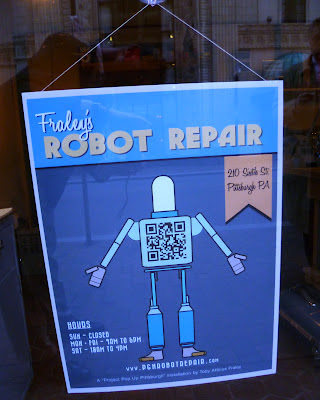 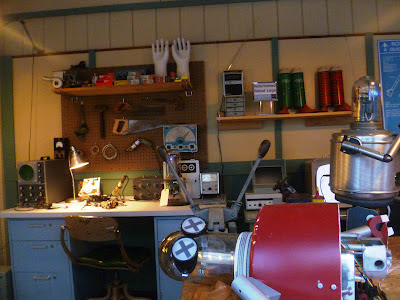 I was having a hangover ameliorating coffee at Starbucks when Chuck walked in and asked me if I'd seen the robot repair shop that was right next door. My first thought was "Robot repair? How much did he have to drink last night?" But there it was, Fraley's Robot Repair. However, it wasn't really a repair shop, it was an art installation disguised as a robot repair shop....a robot repair shop from the Robby the Robot era. It's a project designed by Pittsburgh artist Toby Atticus Fraley. Audience members can look through the shop windows and see robots in various stages of dishevelment on the workbench, along with boxes of radioactive parts. Vintage lab instruments are plugged in and ready to be put to use overhauling the Jetsons' robot, Rosie and her friends who suffer from bunions, robotopause, or even iron-poor tired hydraulic fluid. 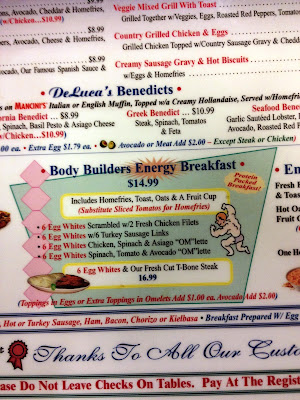 Once our hangovers went away, we went out to DeLuca's in the Strip District for breakfast. Fantastic place--make it a point to go! I'd never been to the Strip District, but it seemed like Manhattan's Meat Packing District without the fashionistas and hipsters who work at J. Crew naming colors. The folks who are responsible for calling boxer shorts anthracite, midnight, soot, and sable instead of black haven't even heard of Pittsburgh, let alone the Strip District. 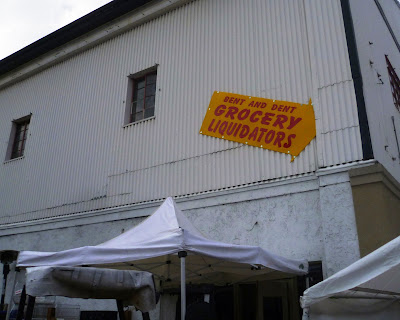 My friend Bruce would love Bent and Dent Grocery Liquidators. I love a good deal as much as the next guy, but you can't mark a bulging can of vichyssoise down enough for me. 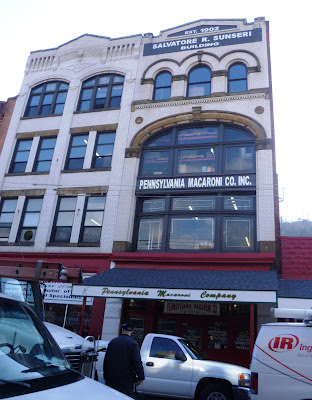 Pennsylvania is known for its macaroni. It's in all the guidebooks. 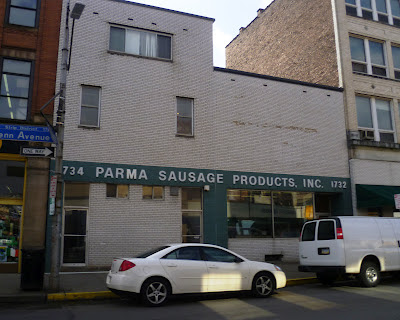 There are lots of architectural gems in the Strip District. 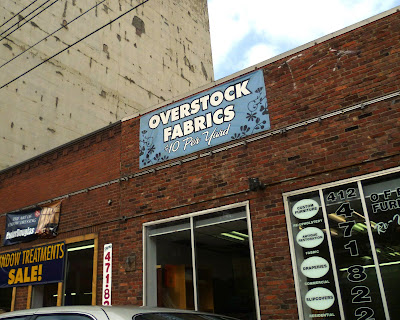 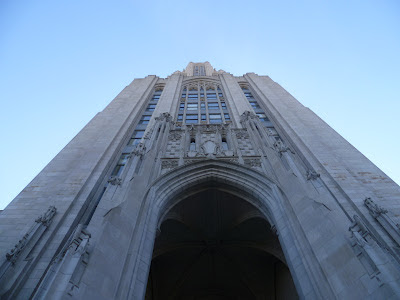 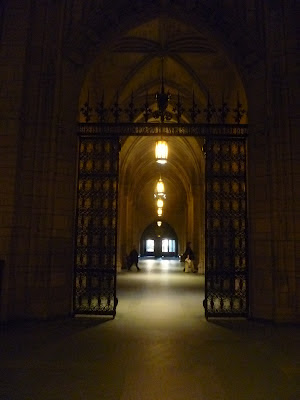 The building is more handsome than I remembered it to be. It was designed by Charles Klauder, a Philadelphia architect who also worked at Princeton, Penn State, Cornell and at a couple of well-known prep schools. The interior is quite remarkable, with a Gothic central space surrounded by the Pitt's famous Nationality Rooms. They're cool but crazy all at the same time. It's great to see the pride Pitt takes in them and how well they're maintained. I wouldn't be much of an architectural historian if I didn't mention that the building contains tons (probably literally) of incredible Samuel Yellin ironwork. 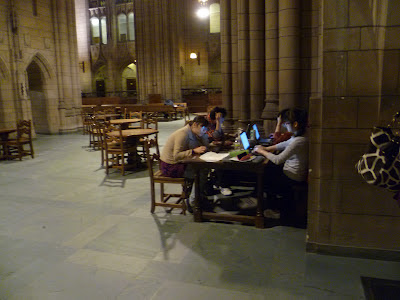 It's Spring Break at Pitt, so the T.o.I. was dead except for some Asian students staring intently into their laptops while they pecked away at their keyboards. Perhaps they were doing Facebook or maybe astrophysics, or were on an industrial espionage mission, stealing the recipe for the Clark Bar. Whatever it was, they weren't in Ft. Lauderdale in an crowdsourced community theater production of Where the Boys Are. 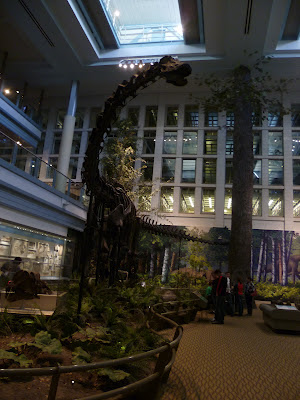 A highlight of the trip was a visit to the Carnegie Museums of Art and Natural History. My RULE class was fortunate to have the charming, erudite, and elfin Dr. Christopher Beard as our guide for a spin through the dinosaur exhibit. In addition to being a great tour guide, he's also a MacArthur Fellow, and won his award in 2000 in the same year as architect Samuel Mockbee, the currently dead founder of Auburn University's Rural Studio.

Dr. Beard explained to us that in the last few years the dinosaur displays and dinosaurs themselves had been refurbished. The museum had more dinosaurs than you could shake a stick at so they were sort of crammed into the dinosaur halls willy-nilly. Things from the Middle Crustacean were rubbing up against stuff from the Semi-Cambrian with a Two and a Half Twist and so on. Not good. So the museum added some space, red-did the exhibits, and even added a glass walled paleo lab, so you can watch museum staff members chipping away at fossils with hammers just as if they're an Ant Farm. It is SO cool. The assembled dinosaurs themselves have had some work, done, too. Hey, before you go all natural beauty righteous and T. Rex on me, after hundreds of million years, you'd want to have a little work done too.

When I was a little kid my parents took my brother and me to the museum to see the dinosaurs and whatnot. They had a good friend whose sister was a curator there, so we got to go behind the scenes with her for a look at the stuff that wasn't on display.  I didn't even know that museums had backstage areas. It was amazing.

One of the things we saw was a stuffed Belgian hare. I knew that hare was another word for rabbit and knew all about rabbits from Beatrix Potter's story Peter Rabbit. Rabbits were all named Peter, after Miss Potter's hero. You know, the guy who wore that fetching blue coat, had siblings named Flopsy, Mopsy, and Cotton-tail and lived near Mr. MacGregor's garden in a hutch that had been decorated by Sister Parish. (OK, I made that part up. But trust me, as rabbit hutches go, his could have been in Architectural Digest.)

So back to the Belgian hare. This thing was BIG. It had to be three or four times the size of any  Peter Rabbit I had ever imagined. My parents' friend told us that someone had imported it from Europe it to someplace near Erie as a pet, and it had escaped and someone else shot it (Welcome to Pennsylvania...blam!) and then called the museum because it was several times the size of Peter Rabbit's American cousins living in the better Erie suburbs. That stuffed hare made quite the impression on me.

Soon thereafter, our tour was over, and my brother and my parents and I left our friend's office and walked through the great marble hall on our way to our car.  My mother and I were right next to a museum guard when I turned to her and said, sounding like the obviously astonished six year old that I was, "Mommy, did you ever see such a big peter?!" I can only imagine the look on my mother's face as my words echoed through the hall.


In the forty some years since that family visit to the Carnegie Museum, I've been around the block a few times. I've even made several excursions to Pittsburgh's gay cousin, San Francisco. Sure San Francisco has sourdough bread, cable cars, Tony Bennett's heart, and men in assless chaps on every street corner. Pittsburgh, however, remains the home of the really big peter.

San Francisco, eat your heart out.