The morning after our encounter with Vulcan, we were up and at ‘em early so that we could have breakfast and be on the road to Montgomery.

We walked down the street to the Salem’s Diner, which according to someone someplace, was the number one diner in Alabama.

I’m sort of a strict constructionist when it comes to diners. They are a purpose-built diner (preferably with lots of stainless steel) or a converted railroad car. Something in a strip mall, while it may have many diner-like qualities (Formica booths, a counter, plain food, sassy waitresses) is not a diner.

And so, for me, at least, the Salem’s Diner wasn’t a diner. But it was diner-ish. Formica booths, check; counter, check; plain food, check. But it was so small that there was only one sassy waitress. I think there were four booths and as many stools at the counter. 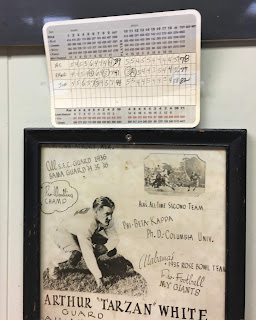 What it lacked in size, it made up in character. The walls were covered, salon style, with vintage sports memorabilia, including someone’s golf score card. As the architect Robert Venturi said, “less is a bore” and this was far from boring. 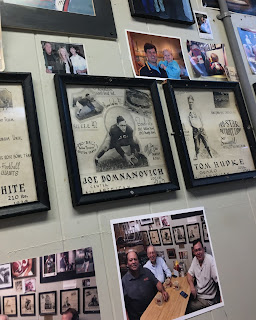 If there was a blank spot on the wall, someone pounded a nail into it and hung a picture there. 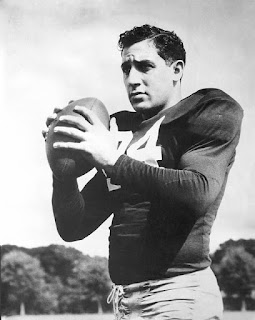 What I know about Alabama and Auburn sports you can put in a thimble, but Salem’s Diner seemed like a good place to be if you were a fan. The owner’s father was the late (as of 2001) Ed Salem, a big deal on the University of Alabama’s 1950 football team. He went on to play for a year for the Washington Redskins and in the Canadian Football League. 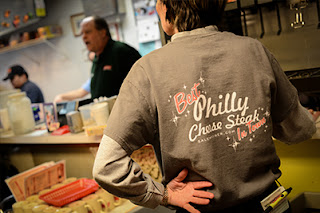 Interestingly enough, the place is famous for Philly cheesesteaks. As a Pennsylvanian, I scoffed. And now that I’m back home in Pennsylvania, I’m still scoffing. This would be like a restaurant in Lancaster, Pennsylvania being famous for its grits.

Cheesesteak claims aside, I loved the atmosphere, in large part due to the gaggle of jolly, aging jocks that seemed to fill every booth and stool in the place.

Our waitress was great too, just the right combo of friendly and sassy.

Bruce and I had eggs, and they were quite good.

Martha’s pancakes, on the other hand, were cold.

I hope that it was just an off day. In theory at least, there are days when neither Alabama nor Auburn wins. Martha’s day breakfast wise, this was one of those days. 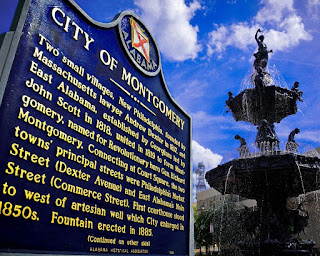 After breakfast we fired up the GPS and pointed our rental car towards Montgomery. 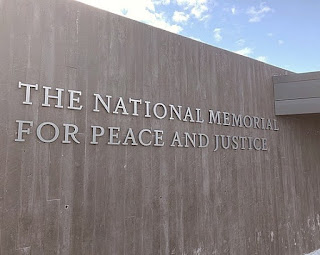 We had tickets to see the Equal Justice Initiative’s National Memorial for Peace and Justice.

The memorial is located on a six-acre site on a hill overlooking the city.

Designed by MASS Design Group in conjunction with the staff of the Equal Justice Initiative, the work is a powerful reminder of America’s sordid record of lynching and racial relations.

When the staff member at the Memorial scanned our tickets, she told us not to take selfies with, or pose with the sculptures. I’m glad that she thought we were young enough to even consider taking a selfie. 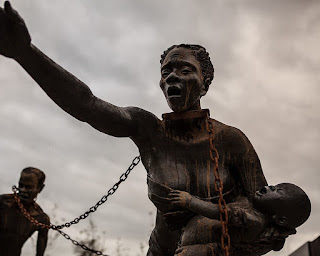 Shortly after entering the memorial, visitors come to a sculptural group by Kwame Akoto-Bamfo, an artist from Ghana. It’s of a group of young Africans, nearly naked and straining at shackles, their faces wracked with fear and horror. I thought it was supposed to represent people being sold into slavery. It’s a powerful and disturbing piece, but I wasn’t expecting it since so much of the press I’ve seen is about the larger, abstract portion of the memorial.

People take selfies with this? I shook my head. 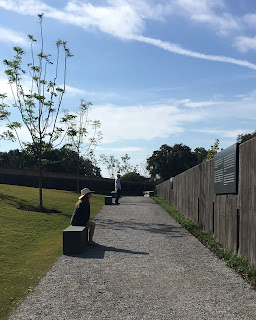 After the sculptural group, a gravel path leads up a gentle slope to the memorial. The right side of the path borders a tall concrete wall. 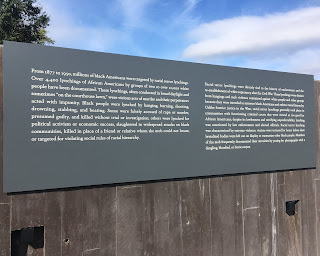 It’s punctuated by five very large text panels that tell the Readers’ Digest version of the story of the lynching of African-Americans in the United States in the years after the Civil War. 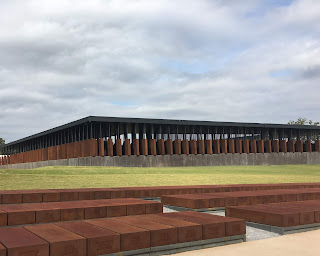 The central portion of the memorial is a large, open, rectangular structure. Seemingly hundreds (I didn’t count) of COR-TEN steel boxes are suspended equidistant from the ceiling. 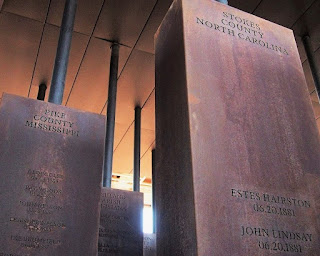 Each box is incised with a state name, county name, and the names and dates of all the men, women, and children who were lynched in that county. 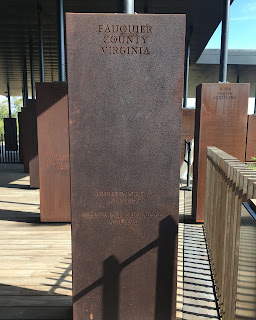 The boxes are arranged in rings, in alphabetical order. Alabama is on the outermost ring, Virginia and West Virginia are on the innermost ring. 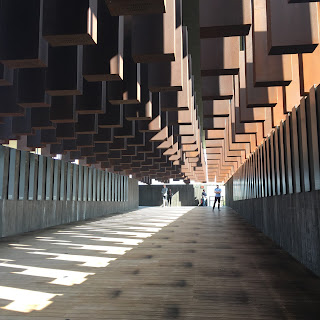 The floor of the memorial is a gently sloping ramp so that as audience members walk through the memorial, the first boxes you come to are at eye level and the final ones are hanging well above visitors’ heads. 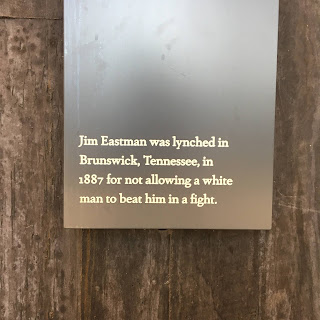 On the third leg of the memorial, there are a series of plaques telling the most basic stories of lynchings. They’re grim. 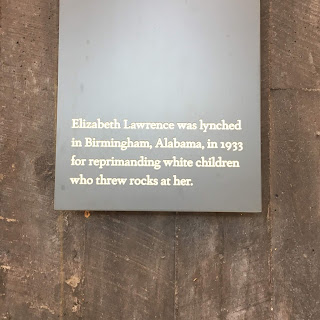 If you’ve somehow missed our country’s difficult racial past, it’s going to hit you here. 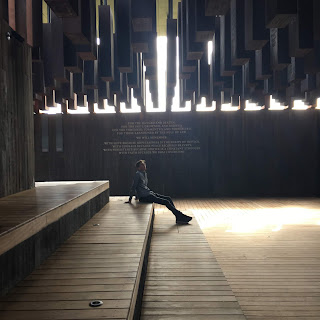 A bench has been built into the wall in case you want to sit and reflect. 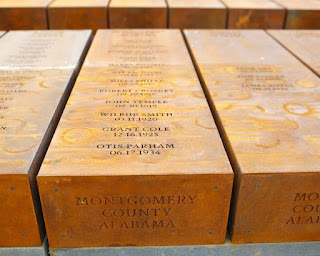 As you leave the central portion of the memorial, the docent explains that the steel boxes lined up outside the memorial are duplicates of the hanging boxes. Starting next year, the memorial plans to start sending them, as sites are prepared, to the counties where the lynchings took place. It’s a way to bring the piece to a much wider audience. 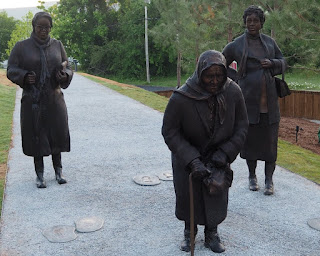 It's a short walk from this large conceptual work to a slightly larger than life sculpture of three women by Dana King, marking  the Montgomery Bus Boycott of 1955-1956. 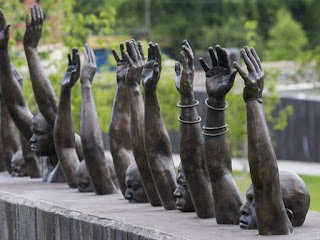 Before reaching the exit, visitors walk by an abstract sculptural work by Hank Willis Thomas and a stone slab bearing the poem Invocation by Elizabeth Alexander.

The central portion memorial is quite powerful, but I think it would have been more so if the sculptural works outside the main body of the memorial had been erected at a different site. I was reminded of Maya Lin’s Vietnam Memorial and how Ross Perot and others insisted on adding some representational statuary to the ensemble. The abstract work is quite capable of standing alone.

After visiting the Memorial, we went to the EJI Museum which is a short drive away in downtown Montgomery. I was glad that we had purchased tickets in advance. It was crowded. The ticket taker asked for our zip codes and remarked that most of their visitors aren’t from the local area. She reminded us that we weren’t to take photos inside the museum. 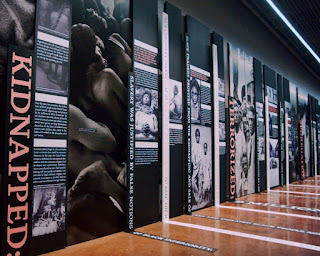 The museum is mostly text panels and some video installation, very slick and au courant. I don’t recall that there were lots of works of art or original documents.

The ban on photos had to be about ensuring a good visitor experience when there is a large crowd. (Thank you Google for the photos!) The place was packed. The story the museum told about slavery, the Jim Crow era, and today’s civil rights struggle is shocking at times. I thought I was well versed and informed on the topic, but I was wrong. 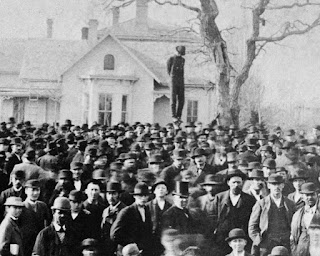 We read and see videos about atrocities committed by ISIS or the Taliban or some other group of people and tend to think, oh, we’re not like that. Unfortunately, we are just like that.

Before going the memorial, I read about a lynching that look place in Charlottesville in 1898, just down the road from my old apartment. As horrible as it was, it pales in comparison to the story of Mary Turner, lynched in Georgia in 1918. As the cartoonist Walt Kelly said, I have met the enemy and he is us. 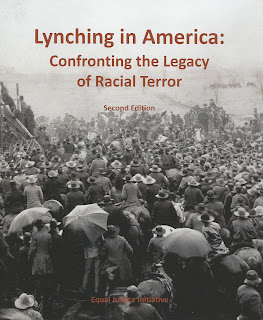 On the way to the car, I made a brief stop at the bookstore. I know I’ve never been to a museum store with merch so attractively priced. The Equal Justice Initiative really wants visitors to buy its books, mugs, t-shirts, and to share its story. Its hope is that we learn from our troubled racial past (and present). I couldn't agree more.
Posted by Rick Bryant at 12:45 PM