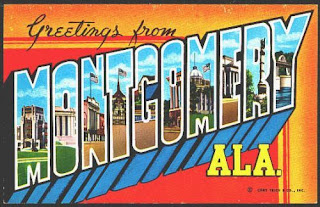 After the lynching memorial, we drove around Montgomery in a bit of shock. The memorial really hits you in the gut. In theory we were trying to find a restaurant, but we didn't do very well on that score. 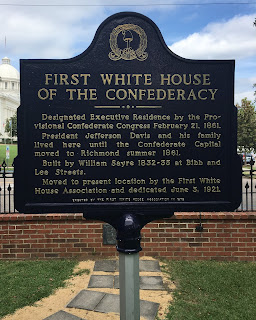 Instead of eating, we went on to our next planned stop, the First White House of the Confederacy.

A little history lesson is probably in order. Montgomery was the capital of the Confederacy from February 4 until May 29, 1861. Since Jefferson Davis, its president, wasn’t from Montgomery, he needed a place to live. The Confederate government leased a home for him and his family. 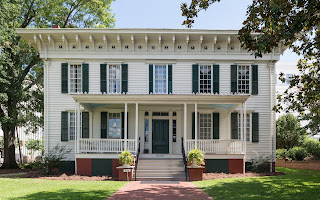 I don’t really know what I was expecting—a docent in a hoopskirt, I think—but I certainly wasn’t expecting to be met by an African American woman—not in a costume—when I pushed open the door. She couldn’t have been friendlier and more welcoming; my guess is that she doesn’t get many customers. She offered bottles of cold water. While I was grateful for it, I thought that food and drink were frowned upon in museums. 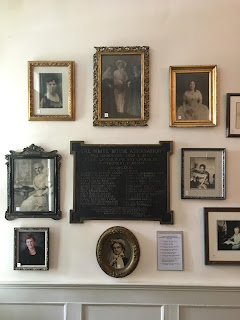 Just inside the front door there was a lovely photo montage of the regents of the White House Association. Regent is the term for a woman in fashionable, not sensible shoes, who headed a preservation organization a LONG time ago.

The First White House of the Confederacy was built between 1832 and 1835 by William Sayre, an ancestor of F. Scott Fitzgerald’s wife Zelda. In the late 19th century the newly organized United Daughters of the Confederacy adopted the idea of preserving the house.

In PR speak worthy of rebranding the Civil War as “the recent unpleasantness”, the United Daughters of the Confederacy became “entangled in personal differences” and that effort went nowhere.

Another preservation group, The White House Association, modeled after the Mount Vernon Ladies Association of the Union, eventually picked up the ball (gown) and got the job done.

Mrs. Jefferson Davis was selected as the group’s first Queen Regent. In fact, she was the group’s only Queen Regent. The post has been vacant since Mrs. Davis’ death in 1906.  The group’s current regent is Seibels Lanier Marshall (Mrs. Jim Marshall). At least I think so; the website hasn’t been updated in some time.

The house is not on its original site. It’s been moved to a place of honor across the street from the Alabama State Capitol. 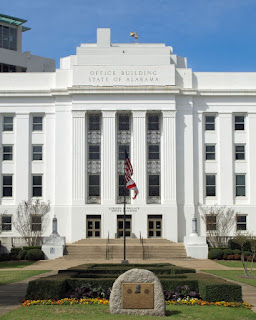 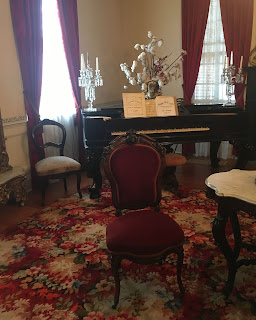 The museum was your standard issue boring house museum.  If you are into 19th century decorative arts, it might be your thing. On the ground floor there was little to ooh and aah over for the true Davis groupie; most of the furniture did not belong to the Davis family. If you are looking for the desk where Varina Davis wrote her husband’s honey-do list (e.g. 1. Defeat Union 2. Have slaves clean gutters 3. Take Jefferson Jr. for haircut), skip the ground floor.

The real mother lode is upstairs in a room chock full of cases filled with relics. 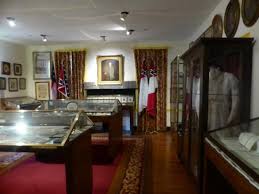 The sacred relics are in cases that look as if they haven’t been freshened since the death of Regent Mrs. Jesse Drew Beale in 1905. Although this wasn’t mentioned at the tour, she was mother-in-law of Edith Ewing Bouvier “Big Edie” Beale and grandmother Edith Bouvier “Little Edie” Beale, relatives of Jackie O made famous in the cult movie Grey Gardens. 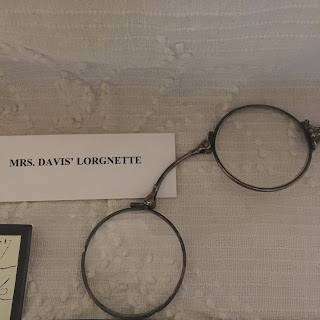 One of my favorite artifacts was Mrs. Davis’ lorgnette. 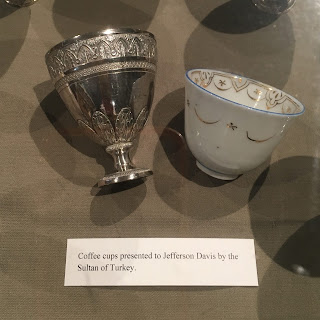 But the coffee cups from the Sultan of Turkey were nice too... 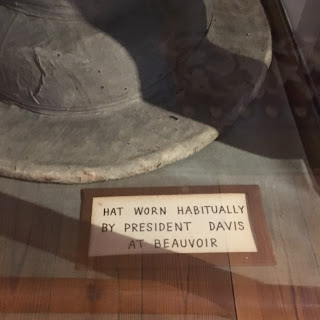 ..as was Jefferson Davis' pith helmet... 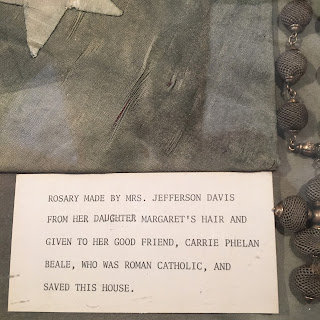 ...and the rosary made by Varina Davis from her daughter's hair.

OK, perhaps the place really is as creepy as Grey Gardens, just without the cats, raccoons, Little Edie singing, and so on.

Interestingly enough the house is closed on June 5 for Jefferson Davis’ birthday.

It’s all kitschy and creepy and for a history geek like me, fun. Even if they don’t mention that Jackie O was Non-Queen Regent Jesse Drew Beale’s people.

So, if kitschy and creepy, old-fashioned Lost Cause house museums are your thing, go. Otherwise, it’s probably ok to move it down to the list of second tier Montgomery attractions. 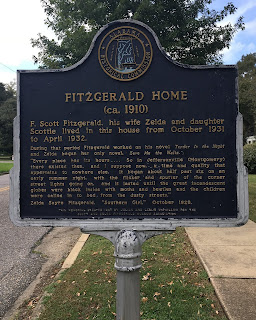 At the end of our visit the docent was very helpful in pointing us towards the F. Scott Fitzgerald Museum.  It was in a neighborhood not too far from downtown Montgomery. 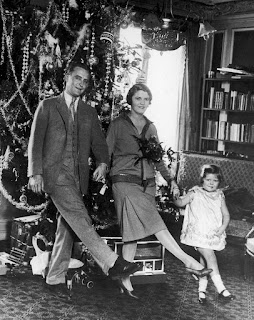 Literary types know that F. Scott Fitzgerald was from St. Paul, Minnesota, but his wife, the former Zelda Sayre, was from Montgomery. This particular museum (and I use the term lightly) claims to be the only museum dedicated to the Fitzgeralds.

My first clue that something was up was the state of the driveway. 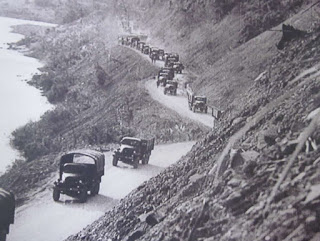 I think the Ho Chi Minh Trail might have been in better shape when it was being pounded daily by bombs dropped by B-52s. Seriously, you could twist an ankle walking up to the front door. 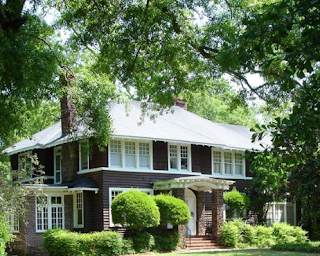 The house is an extra large bungalow. Not something I expected to find in Montgomery, but surprises seemed to be the order of the day.

The front door was dirty and in bad repair. It didn’t need just a little tender loving care, it needed a full work up at the Mayo Clinic.

The interior looked as if someone bought an old fraternity house, took the furniture out, framed issues of old Life magazines, hung those on the walls, and called it a day. 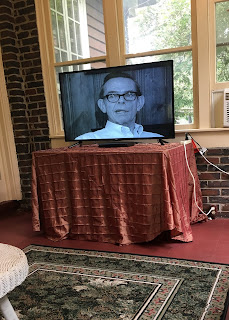 We were subjected to a video (judging by the hairstyles, VHS-era) that we watched with two other tourists/victims and then we were free to walk around and check out the exhibits.

As far as actual Fitzgerald memorabilia, there wasn’t much.  Once again, there is no sacred desk and honey-do list (1. Write the Great American novel (again). 2. Buy booze 3. Buy more booze). 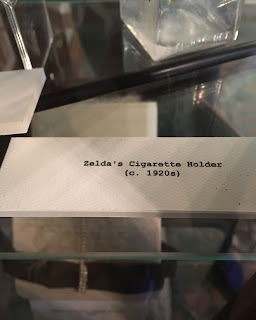 A highlight of the collection was Zelda Fitzgerald’s cigarette holder. 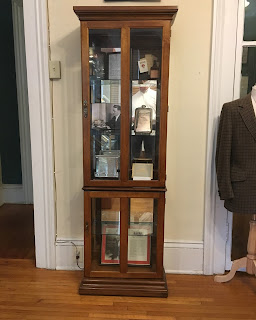 There was also a nice 1920s vintage toaster that didn’t seem to have belonged to anyone in particular. In the immortal words of Dave Barry, I am not making this up.

And what’s worse, Scott and Zelda were in no way related to Jackie O, Jackie Chan, or even Jackie Collins. 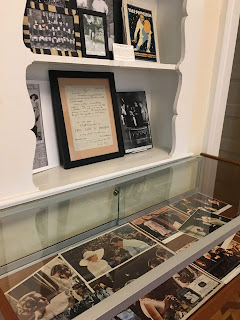 After about 10 minutes of looking at copies of newspapers and still photos of the 1974 film version of The Great Gatsby starring Robert Redford and Mia Farrow, we’d had enough. I thought I might actually detach a retina due to excessive eye rolling.

The rather listless person in charge came around and said that we could go online to pay the admission fee. Yeah, I was going to get right on that.

In short, it was easily the worst “museum” I’ve been to in a very long time. 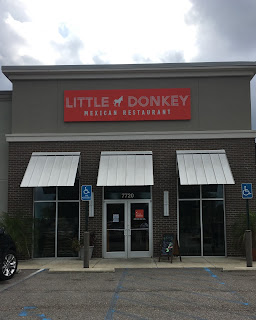 Somewhat by accident we found a fantastic place for lunch in Montgomery’s outer 'burbs. How could we not stop at a place called Little Donkey?

After a great lunch, we were on our way to Selma and the next stop on our trip.
Posted by Rick Bryant at 8:28 PM