After the Hertz parking lot debacle, the we didn’t stop until we came to the Alabama Welcome Center, just after we crossed from Georgia into Alabama. State welcome centers are always good stops for free road maps, clean bathrooms, and picking up brochures for places that you didn’t know existed. 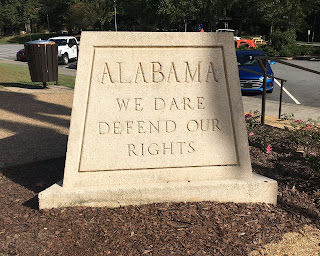 This one had a big monument of the Alabama state motto out front. Yikes.  While Alabama was admitted to the Union in 1919, it didn't adopt this state motto until 1939.

As state mottoes go it’s not quite as violent as New Hampshire’s Live Free or Die, or doesn’t require a knowledge of rudimentary Latin like Virginia’s Sic Semper Tyrannis. However, in the all around oomph department, it doesn’t even come close to New Jersey’s Not Only Toxic Waste But Also No Self Serve Gas.

Oh well, at least it wasn’t a monument celebrating the Ten Commandments. 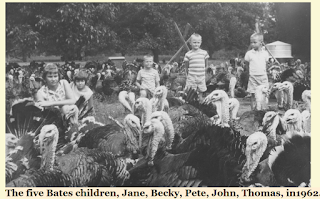 Officially welcomed and with map and rack cards for the Paul W. Bryant (no relation) Museum and the Bates Turkey Farm and Restaurant in hand, we set out for Birmingham. I'm still sorry that we couldn't fit the Bates' place into our itinerary. 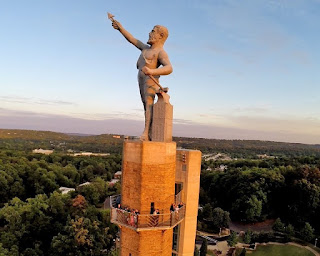 Before even checking into the hotel, we headed for the giant statue of Vulcan that overlooks the city.

Vulcan is a little shorter than the Christ of the Ozarks in Arkansas and Lucy the Margate Elephant in New Jersey, two of my favorite giant statues. But Vulcan is on a 10-story pedestal atop a small mountain overlooking Birmingham, a much better site than his compadres have in a mostly unbuilt Jesus-themed amusement park in the Ozarks, and on a not-very-attractive swatch of the Jersey Shore. What Vulcan lacks in height he makes up in location, location, location. 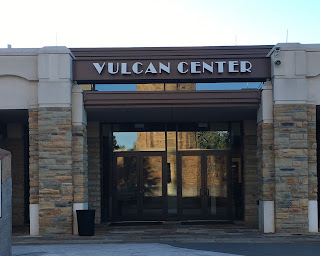 We bought tickets at a booth at the base of the park and then walked uphill to the Vulcan Museum. It’s a few steps from museum to the actual Vulcan Tower. 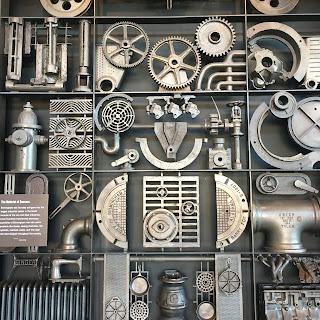 The first wow moment at Vulcan occurs when you walk into the museum/visitors’ center. They’ve placed a Louise Nevelson-ish sculpture of cast iron stuff—manholes, radiators, gears, pipes, and whatnots, celebrating Birmingham’s days as the largest industrial center in the south. It’s quite nice, really. 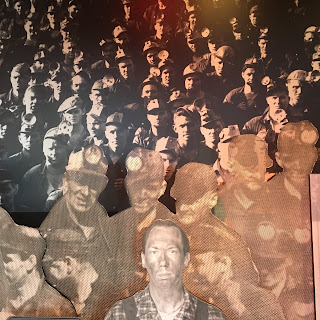 The museum behind the sculpture tells the tale of the statue and gives you a brief glimpse into Birmingham as a manufacturing center. I thought of it as a cousin to the museum at the base of the Hoover Dam, only the blue collar workers in these exhibits were wearing more clothes and lacking in the Tom of Finland-esque je ne sais quoi of the guys in the exhibits in Hoover Dam. This is the Bible Belt, after all.

The park’s website (which is great, btw) tells the story of the statue, which was created by an Italian American sculptor working in New Jersey, Giuseppe Moretti. 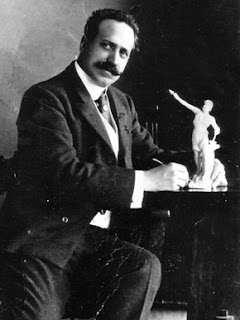 The Birmingham Commercial Club commissioned Moretti to sculpt the giant Vulcan in order to showcase Alabama’s industrial might at the 1904 World’s Fair in St. Louis. This was in the era when businessmen thought giant statues were a good idea. The Birmingham Steel and Iron Company used molds created by Moretti to cast the statue in 21 separate pieces of iron which were assembled at the Fair. Birmingham's Vulcan is the largest cast iron statue in the world.

Vulcan stands at his anvil, with a hammer in his left hand, holding aloft a rather cartoonish spear in his right hand. He’s wearing apron that droops to expose his heaving-in-a-manly-sort-of-way left pec. He’s sporting an Eddie Haskell-esque hairstyle accompanied by a totally butch and au courant hipster full beard. 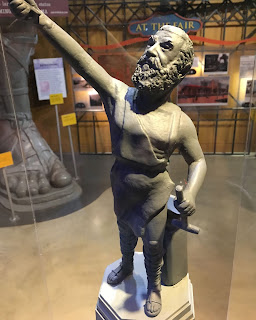 He wears non-OSHA approved non-steel toed gladiator sandals. You have to hand it to the guy, he knows the value of statement shoes. 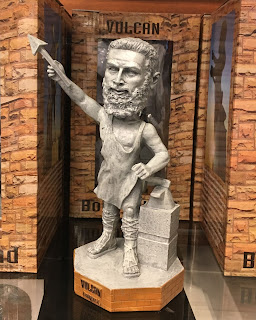 While Mr. Moretti made a valiant attempt, Vulcan’s head seems too large for the rest of the body, and as a result, Vulcan looks like a 56’ tall bobblehead doll.  Interestingly enough, you can buy a Vulcan bobblehead in the gift shop. 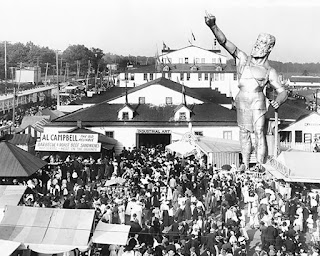 After Vulcan’s gig at the World’s Fair—where his prizing wining status makes me wonder about the competition—he was brought back to Birmingham and reassembled—incorrectly—at the Alabama State Fair Grounds. I’m unsure if the knee bone didn’t connect to the thigh bone, or exactly what. 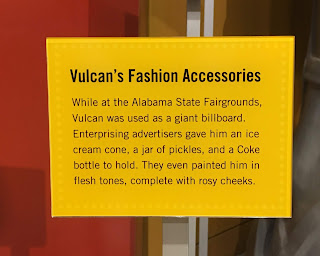 This was the start of Vulcan’s checkered past, and at various points he held up a Coke bottle, a pickle sign, and even a giant ice cream cone. Apparently, the heat from Vulcan’s forge did not melt that particular kind of ice cream. 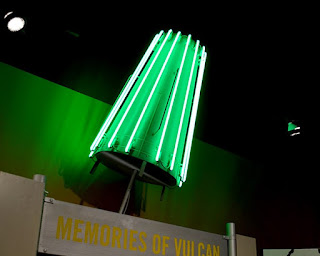 Vulcan was moved to his current home as part of a WPA project and presumably the museum building dates from this time. Vulcan’s career in advertising wasn’t over however, and in 1946, at the instigation of the Birmingham Jaycees, Vulcan started to hold a green neon beacon that turned red on the days that there was a traffic fatality in Birmingham. 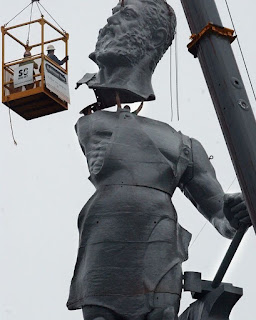 As you can imagine, all those years hanging out at the Alabama State Fair and concentrating on traffic fatalities did a real number on him and he underwent a full restoration in 2003-2004.

Now he’s back to his buff self, and even wears the same size trousers as he would have worn at the 1904 World’s Fair....had he worn trousers there anyway. 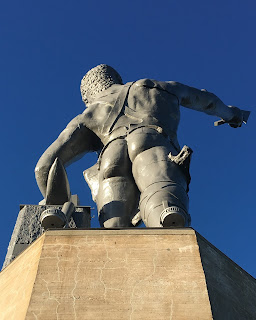 Unless you bring a drone—which I didn’t—it’s hard to get a good look at Vulcan. But he has a nice butt and trust me, you can’t say that about all the giant statues. 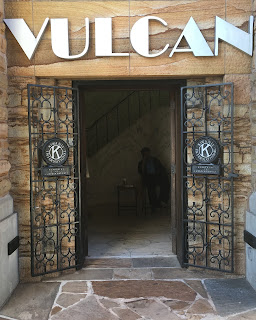 I took the elevator to the 10th floor outdoor observation deck to see Birmingham spread out before me like the buildings of Plasticville that went with my old Lionel train set. 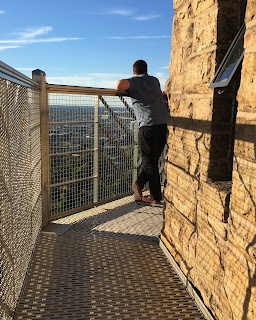 The floor of the deck is mesh so you can look straight down, always a fun thing if you’re afraid of heights. 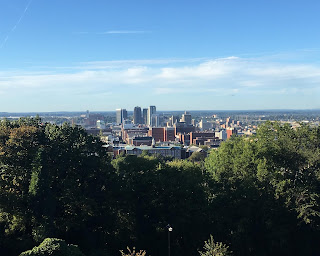 When I was on the deck, we could see and hear the University of Alabama at Birmingham marching band on its practice field in the distance. Although they weren’t playing Sweet Home Alabama it was way more festive than the spread of hors d’oeuvres the Birmingham Estate Planning Association was laying on at for a cocktail function in the park as we left. 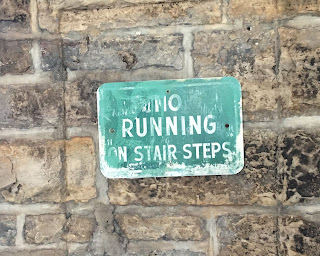 I minded the signs and did not run down the stair steps, equally impressed by Birmingham’s industrial might and Vulcan’s ageless physique.