The Christmas Tree Capital of the World 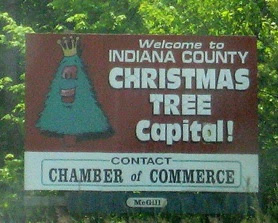 I don’t know about you, but one way I spell fun is to go to a conference in Indiana, PA, a town that bills itself as the Christmas Tree Capital of the World. While I saw the sign that made that very claim, I didn’t see a single Christmas tree farm. I saw lots of dairy farms, and some beef cattle here and there, but not a single Christmas tree farm. On the other hand, I didn’t see a holiday tree farm, or even a menorah farm, so there was no sign of a vast left-wing conspiracy to take the Christ out of Christrmas Tree Farm.

I’m not sure which came first, Indiana, Pennsylvania or the State of Indiana, but as a Central Pennsylvanian I often have a nanosecond of confusion when someone mentions Indiana and I have to figure out which one they’re talking about without looking like I’m trying to figure that out. Yes, I’m a doofus. 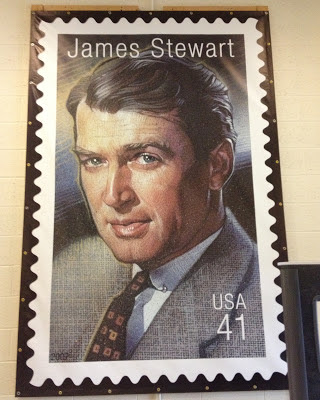 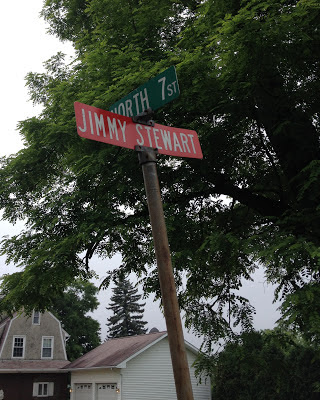 In addition to the business about Christmas Trees, Indiana is known for being the hometown of Jimmy Stewart. There’s even a small museum devoted to the star in downtown Indiana—across the street from the site of the hardware store that his family owned. The museum is a bit hokey, but charming, too, and is definitely a must-do if you’re in Indiana. While the Stewart family seems to support it, don’t go there look for his Best Actor Academy Award for Philadelphia Story—it’s someplace else. 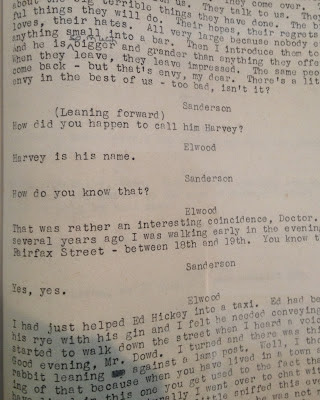 But there are plenty of interesting items—for example, the script for Harvey and the front door from his now demolished house in Beverly Hills. There are also lots of things like the stuff that I have from my grandfather: kitschy knicknacks, his high school diploma, business papers, and awards from various service clubs. 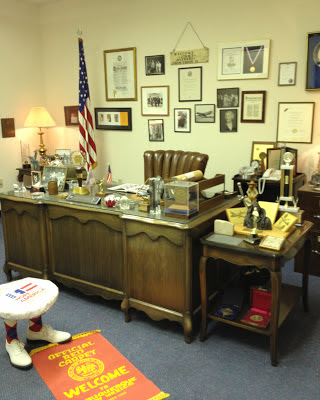 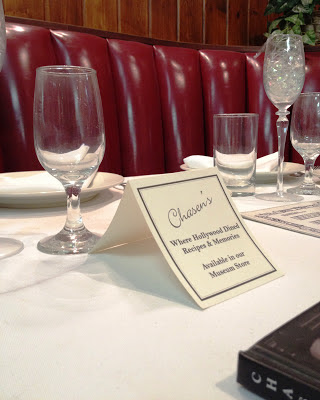 His office has been recreated, and there’s also a booth from Chasen’s, the favorite L.A. eatery of the stars of the Jimmy Stewart era. Had this been the Bryant family museum, it would have been the booth from The Corner Room where my sister barfed when she was a kid.

My meeting was held at IUP, formally known as Indiana University of Pennsylvania. There is no relation in the slightest to the No Descriptor Needed University of Pennsylvania. My grandfather was a member of IUP’s Class of 1916. He grew up on a farm (dairy, not Christmas tree or even menorah) near Indiana and lost his leg in a farming accident when he was a small child. Since he used a wooden leg, I mean, prosthetic device, he was unsuitable for farm chores, he went to college to make something of himself.

IUP seemed to have a handsome campus even though more often than not I thought I felt as if I was entering any building I went to via the back door. Fisher Auditorium was particularly nice—it’s sort of a Georgian chapel (less the steeple) from the front while the interior is Art Deco movie house. I suppose that makes it an architectural mullet—all business up front and party in the rear.

The conference was the annual hoedown for presenting organizations in Pennsylvania. Although there are some nice people in the group, it can be pretty dreadful—you try sitting next to a pit bull-like agent pitching a tenor slash airline gate agent from Long Island at lunch. This year I had the good fortune of running into an agent for a band I’d booked last year. We’d only met on the phone and so it was a pleasant surprise when he introduced himself. He was bright and funny and didn't look at all like the person I imagined him to be, not that I had a clear picture in my head. 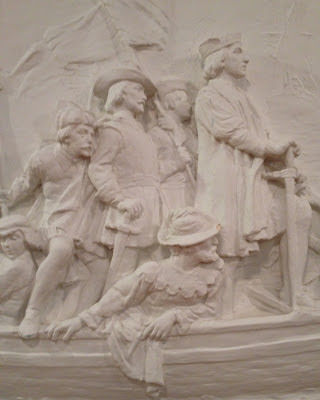 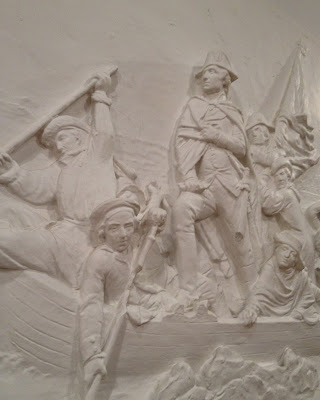 Our conference’s main luncheon was in what seemed to be the central administration building—though I’m not entirely sure what it was, since I went in the back door. The room was decorated with patriotic and neo-classical plaster reliefs. Presumably they were thought to be educational and uplifting to students of my grandfather's era. I think I was the only person in a room of 100 or so to take much interest in them. 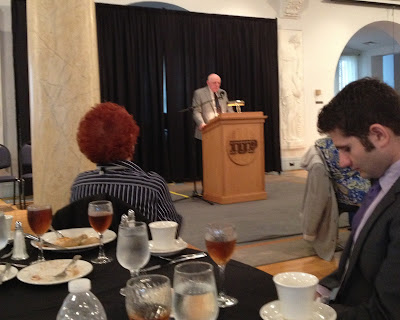 The luncheon speaker was John Astin. Yes, Gomez Addams. He’s alive! I think he went to IUP with my grandfather. Actually, he wasn’t that old, just almost, and really, looks pretty good for someone I thought was dead. His luncheon speech was long and he didn’t mention The Addams Family or Patty Duke once. The highlight of the lunch was when someone’s phone went off and they couldn’t figure out how to stop it. Even John Astin stopped talking and asked what was going on as the embarrassed perp tried to beat the offending phone into submission. 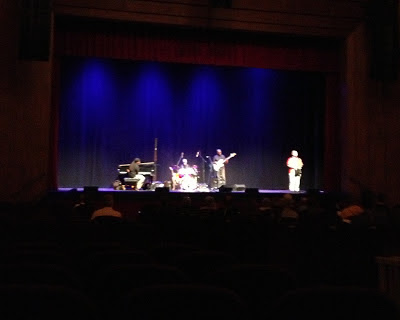 Lots of the conference is devoted to showcases—brief (15 minute)— performances that are intended to entice presenters, like me, to book the performer. In a way it’s like an audition. There were some great showcases and then well, there were the not-so-good showcases.

One guy played little whistles and looped the tunes he created. Pretty soon it sounded the Nature Company Store at Baltimore’s Inner Harbor in 1984. He clearly did not know the meaning of the technical term “15 minutes”. Had they not turned up the house lights, I think he’d still be there enjoying his own company. There were also some semi-leaden dancers, of the Ukrainian and modern variety. Not my thing. How could I forget the chamber music group that sounded as if they’d handed each player music for a different number? I’ll pass thanks. There was also a glitzy country-classical family group that sounded OK if you like that sort of PBS telethon act. My guess was that they practiced so much that they were left with no time to ask that important question, “Which is worse, my dress or my hair?” I’m sure they’ll be quite successful, but they weren’t really a fit for CPFA.

There were some unexpectedly good showcases, too. If you can blow a balloon up with a leaf blower, and then crawl inside the balloon, and act like the monster from Alien, I promise I’ll laugh. Some acts I’d booked in the last year or two were there showcasing. The fact that those acts were both talented and professional made me feel smart for having brought them to the Arts Festival.

After enduring leaden dancers long enough on the last night of the conference, my friend Patrick the agent and I decided to stop in at the hotel bar. It wasn’t very crowded at first—apparently my professional colleagues like bad dance more than I do. We were shooting the breeze and having a few chuckles with the guy a few empty stools away when the subject of mooning people came up. Patrick and I both admitted to having mooned people at least once in our lives. I asked Ashlee, the friendly bartender, if she’d ever mooned anyone.

“Oh yeah, lots of times”, she said casually, as if I’d asked her if she’d ever gotten a parking ticket. She proceeded to share the story of how she repeatedly mooned her grandmother in a nursing home, exposing not only her not insubstantial ass, but also her tattoo.

"What's your tattoo", I asked, expecting her to say, the Steelers logo, or perhaps Wilma Flintstone.

“You mean a cherub?”

Ashlee told us that her grandmother loved it when Ashlee dropped trou and bent over right there in The Home. I have no doubt that it was some sort of religious experience. Bernadette of Lourdes sees the Virgin Mary; a woman in a Pennsylvania nursing home sees a cherub tattooed on her granddaughter’s ass. I suppose that comes under the heading of "God speaks to us in different ways."

A key part of Ashlee’s mooning ritual was the fact that the cherub was a little worse for wear since when Ashlee “went tanning” she neglected to put “that stuff” on him. I wasn’t exactly sure what “that stuff” was (asbestos? duct tape?) or what could have possibly happened to the little (OK, probably kinda big) guy, but I’m hoping that he’ll get some medical attention once Obamacare goes into effect.

On my way home from the conference, I tried to find the farm where my grandfather, Harry Nehrig, grew up, and where I had to endure a couple of Nehrig family reunions when I was a small child. I tried to look it up online, and found a web page that said that the farm had been in the same family for seven generations. While my grandfather the family patriarch loved going to the reunion, and having his children and grandchildren there, an afternoon on the farm eating congealed salads in the company of my rural relations was not for me. 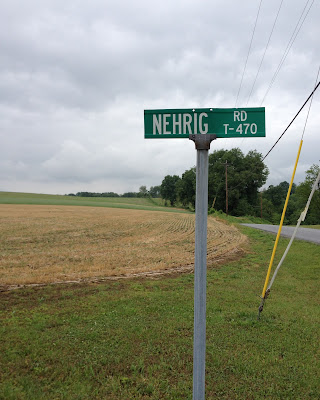 I found Nehrig Road but that was it. There was a ranch house right there with a big rock in the front yard that said it was the Nehrigs. 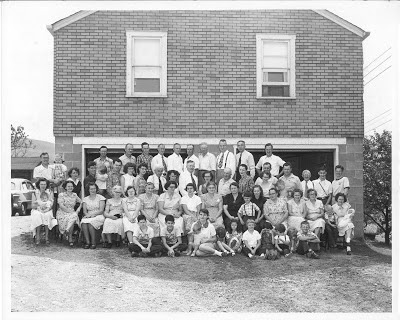 I thought about stopping and introduce myself, and showing them my family tree and vintage reunion photos, and asking where the farm I barely remembered was--it had to be around there someplace. In the end, I decided that long-lost distant relatives would have to wait, that whatever lore they might share could never compete with the story of a woman who mooned her grandmother in a nursing home.
Posted by Rick Bryant at 5:39 PM