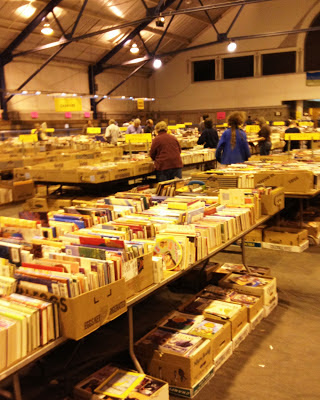 One of the annual Rites of Spring in State College is the annual AAUW Used Book Sale. In our post-modern, sustainability-infused world, it’s the love child of Match.com and a recycling extravaganza where our old books go to meet new bookworms. In the process, the local chapter of AAUW raises a tidy sum to support its good works, of which, all kidding aside, there are quite a slew. 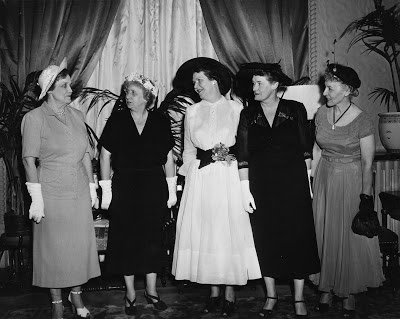 The AAUW (American Association of University Women) is an old fashioned women’s club. Well, not exactly. I am not sure that they play bridge, eat triangular tea sandwiches from which the bread crusts have been trimmed, and talk about genealogy. I mean, when would they have time? The book sale requires endless hours upon hours of work. But really, if they wanted to throw back a few in search of the perfect Old-Fashioned, no one would blame them. All those books can make a girl thirsty.  (Bess Truman's recipe for an Old-Fashioned: bourbon and ice. That's it. Skip all the fluff.) 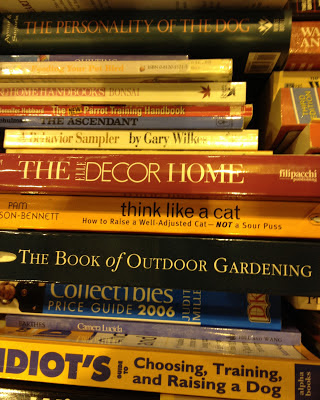 The women of AAUW accept donations of books from anyone who can open a large plastic bin and put a book or even a box of books in it.  The AAUW-ers then price and review the donations and make sure that there’s not a hidden treasure map stuck between the leaves of a book no one has opened in forever. They recycle some books right away—they don’t think there’s much of a market at the sale for the 89th copy of the Fifty Shades of Gray.  They keep the decent books (and trust me, they have catholic tastes when it comes to decent) and then sort them according to category of subject matter. At the end of the intake process, the books are put into specially marked heavy-duty fruit and veg boxes that they’ve been saving for years. 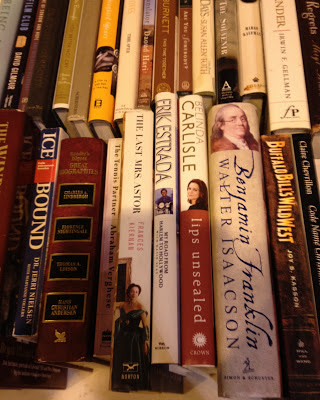 Two days before the sale, the event committee arranges for a small army of volunteers and a fleet (OK, five or six) trucks to transport the books from the AAUW warehouse to Penn State’s Snider Agricultural Arena, several miles away. A crew of manly men at the warehouse location loads trucks, and then another crew of volunteers unloads trucks at the Snider Ag arena. I’m on the unloading crew. 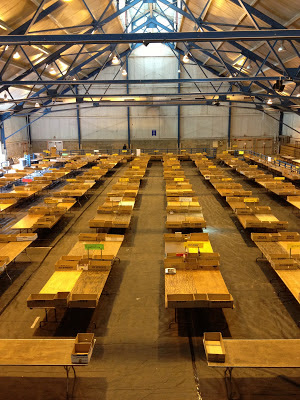 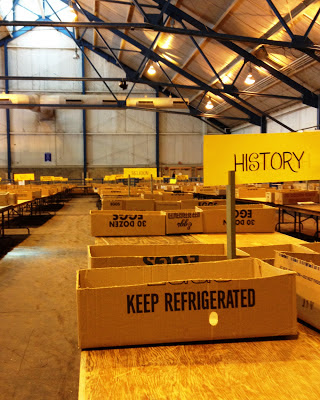 The sawdust floor of the arena—where livestock usually trots around and so on—is covered with black Tyvek-like fabric. The arena is then filled with a sea of identical sturdy tables. Each table is reserved for a specific subject matter—the more popular subjects get more tables. 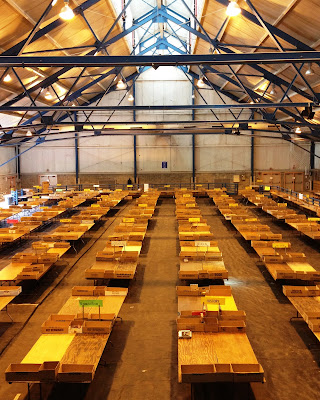 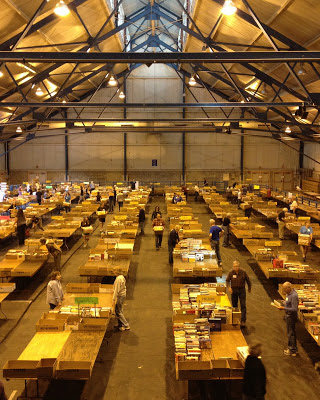 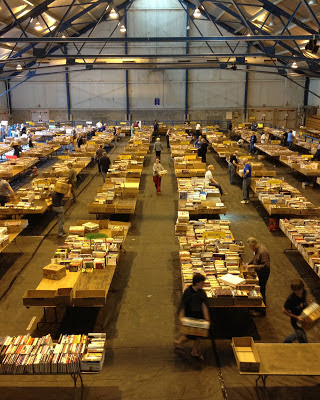 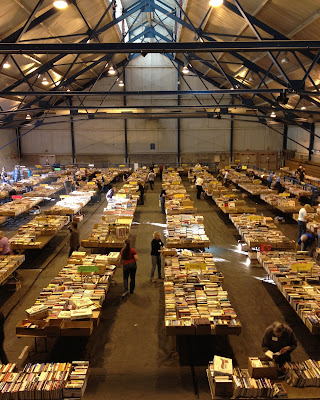 The women of AAUW never seem to get beyond a healthy glow as they unload the books from the boxes the volunteers tote to each table. One woman is in charge of less popular genres, such as biographies, while it may take a few to handle more popular areas like children’s books.

Back in the olden days, when I’d just started helping, there were PSU Navy ROTC students on the unloading crew. They were hard workers though they did spend a serious amount of time preening and flexing and trying to attract girls or perhaps boys if they were in a don’t ask/don’t tell situation. Even then, if you asked nicely they’d probably tell you, and perhaps even show off the resulting tattoos, all in the strictest of confidence, of course.

Today much of the help comes from kids from the local alternative high school. Some of them are good workers, like the boy who carried boxes of books on his head, but others seemed to have cut the class about the Meaning of Work. They show up in flip flops and muumuus and aren’t really there to work, but instead come hang out with other kids in flip flops and muumuus and collect the community service hours necessary to earn a State High diploma. I’m sure some of them would be OK with close supervision (as in on a chain gang), but this year, there was no close supervision. Exasperated, I even resorted to exercising my first amendment rights by telling a gaggle of them to cut the tomfoolery and get back to work. Big surprise: it didn’t work. 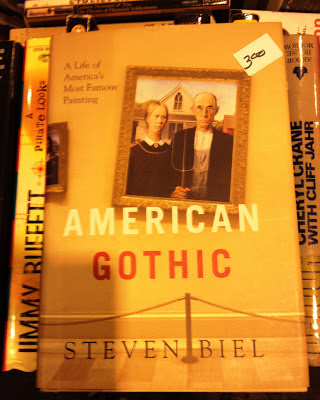 Unlike the high school kids, some of the women of the AAUW aren’t so young. In fact, I’ve even heard them refer to each other as “old biddies” in a tone not reserved for terms of endearment. It occurred to me that a couple of the women might have dated Guttenburg, as in Johannes not Steve, but  some of them could have done Steve too. After all, according to Steve Guttenberg’s modestly titled autobiography, The Guttenberg Bible, he had plenty of conquests. I would not be surprised that at least one of the AAUW women had a moment with the star of Police Academy where she took off her glasses as she unpinned her bun and shook out her greying but not yet blue tresses. And then, in a voice redolent of Sanka, Dewey Decimal numbers, and an occasional Thursdays-only hit of Milk of Magnesia, purred “Steve, I don’t want you to think of me as just an old biddy from the cookbook section of the AAUW booksale…”

Most of the women are the life of the party and are glad you’re there helping, even the quiet woman in biographies who always wears headphones as she works and has so far resisted my suggestion to create a special section devoted to Princess Diana. However, there are also women who aren’t very nice. I mean, they’re not exactly mean, but lots of them don’t say thank you and act as if it never would occur to them that the box toters read books, too. Lots of times I’ve walked to a table with a heavy box of books and the woman-in-charge, a who no doubt spent her senior year in high school as a state officer in Future Prison Matrons of America, will point and bark “Just put ‘er there.” When that happens I see her as her  film noir doppelganger who smells faintly of Vat 69, with the ever present cigarette balanced on her lower lip. As she sorts books, her Benson & Hedges menthol bounces up and down with each syllable, its impossibly long ash about to fall onto a well-worn copy of  Ship of Fools by Katherine Anne Porter. Before her ash falls, the moment is gone. I chuckle to myself and go back for another box of books. 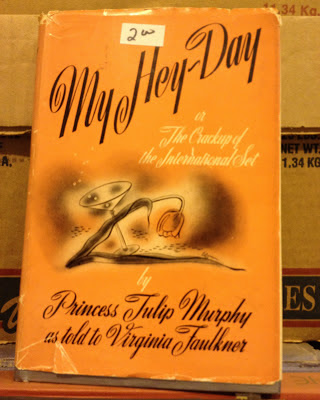 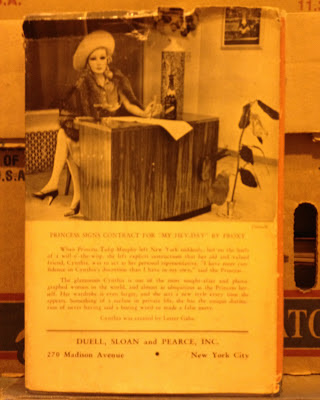 This year I overheard one of the women correcting someone. “That’s fewer, not less. Use fewer when it’s something you can count”. I shared with her that my mother's pet peeve was using the word "raise" when someone really meant "rear".  I don't think she shared my mother's sense of outrage.

Since I’m partial to history and bio, I asked the volunteers in history what the most unusual book they’d seen. “Something about Napoleon’s Privates. It was pure pornography!” “Oh my!” was all that I could manage as a made a mental note to go back to look for that. Once I found it, of course, I had to buy it. In case you’re wondering, in the index under John Dillinger, it says, "Penis as relic….p. 39”. According to Napoleon's Privates, 2,500 Years of History Unzipped by Tony Perrottet, the story about Dillinger's uh, big weapon, being stored in a shoe box at the FBI isn’t true. Yeah, right. 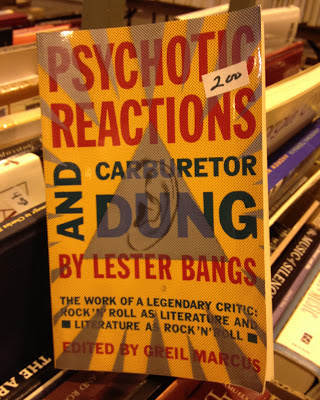 Once all the books are unloaded volunteers are given about 30 minutes to shop before the arena is locked for the night. Although I’m not typically in the mood for books after carrying so many, I do a jiffy tour through the histories, bios, and art/architecture books to see if there’s anything worthwhile.

Two days later the event opens to the public in a feeding frenzy that makes the Oklahoma Land Rush look like a slow moving line receiving line at Koch Funeral Home. When the sale is over a few days later, the AAUW has done State College a huge service. Lots of great and not so great books have found new homes, high school kids have completed some community service project, and the AAUW has earned a ton of money to fund its good works.  I have some sore muscles, and if I'm lucky, a few books to enjoy know that that some day they may go back to the plastic bins at AAUW where they will start their lives all over again.