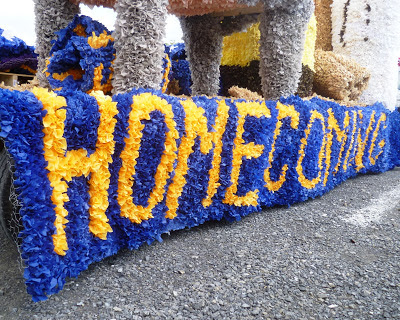 Since I’m a native State College-ian, homecoming at Penn State has been a part of my life forever. The event is right out of a MickeyRooney/Judy Garland movie, with an ice cream social, parade, homecoming queen, football game, and other expressions of good clean fun. Since the State High band marches in the parade, my clarinet and I made three appearances when I was in high school.  It was always a fun parade, with big crowds of cheering spectators.  Most of the units in the parade are local, but interestingly enough, in the 1980s, when I was no longer in the State High Band, the Budweiser Clydesdales made a couple of appearances, adding some star power to the parade.  Of course, those were the days when we could admit that college kids (and alumni) drank beer.

When I was an actual Young Professional, well before Al Gore invented the internet, I got to be a homecoming parade judge. The committee had asked an acquaintance and she’d demurred, thinking it was low rent, anti-intellectual, and would take precious time away from her eating disorder. When she mentioned that she’d been asked, I said, in my best U.S. State Department language, “Holy Crap! Are you fucking nuts? How could you say no to that? I’d do that in a minute.”  So she called up the committee, impressed them with my bona fides (the big three: breathing, willing, and available) and the next thing you know, I was in parking lot 80 with fellow judges Sue Paterno and other Penn State VPs, not to mention a large posse of camp followers.

We were given some basic instructions and score sheets and were sent out to judge both the floats made by the various fraternities and sororities in addition to the “mad hatters” which were sort of a one man float that preceded the big float as sort of an out and proud homecoming Japanese mini sub.  When we were done, we were taken to the reviewing stand at College Avenue and Allen Street and our reserved seats to watch the parade go by.  It’s a great gig, and if they ever call you up and ask if you’re breathing, willing, and available, say yes.

In 2009 I was asked to be the Honorary Grand Marshall of the Parade….my status being Honorary since I wasn’t a Penn Stater. My duties would include riding in a convertible and waving and smiling.  I’m just a boy who can’t say no, so I went to Jack Harper and bought a Penn State necktie so I would at the very least look like a Wahoo impersonating a Penn Stater. Man does not live by blue and orange neckties alone.  So I hear, anyway.

A few days before my star turn, there was a freak October snowstorm. Since the leaves hadn’t yet fallen, trees were magnets for wet snow, and limbs fell on power lines all over town. Some people were without power for several days. This definitely put a damper on the parade and especially on attendance by my close friends, co-workers, and family. I remind those who didn’t come of this from time to time. In addition to the gift of the grace and athleticism of a natural athlete, I’m fortunate to be blessed with the gift of forgiveness, too.

I think that serving as the Penn State’s Homecoming Parade Honorary Grand Marshall is the one thing I’ve done in my life that impressed my college chums. At my last college reunion, I was at some function involving not very much to eat but lots of free booze: in other words, southern hospitality. During the “What are you doing now” phase of the cocktails, which takes place somewhat before the “Did you see so and so? He looks terrible!” portion of the event, a friend asked me what I was doing now. I said that I was the director of an art and music festival and explained what it was all about. I could see the wheels turning as he thought to himself, “Rick’s a carnie. Day-um. I wonder how many tattoos he has.” But when I told him that I’d been the Honorary Grand Marshall of the Penn State Homecoming Parade, you’d have thought I’d told him that I’d just won the Ironman Triathalon, a Nobel Prize , and been named Miss Congeniality at the Nun’s Beach Surfing Tournament. 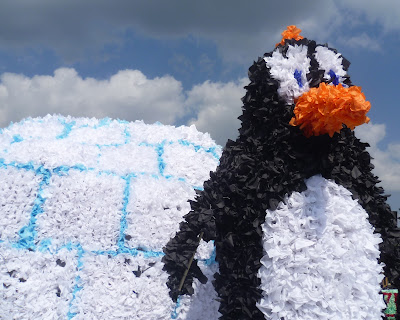 This year’s theme was The Glory Echoes On which I understand beat out Loose Lips Sink Ships, Aim High In Steering, and Things In Mirror Are Closer Than They Seem. The Glory Echoes On.  Apparently Yoda was in charge of the theme committee. I didn’t know glory could echo, let alone echo on. Perhaps I am no longer college material. 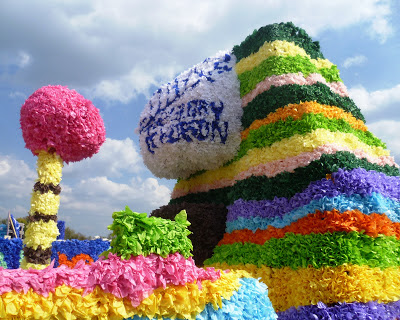 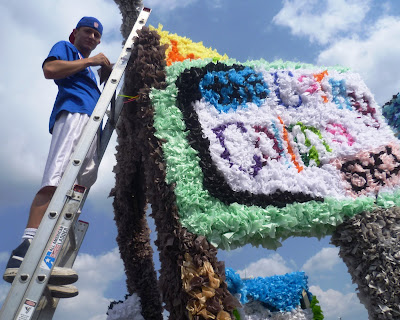 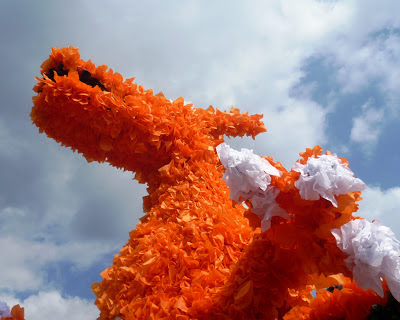 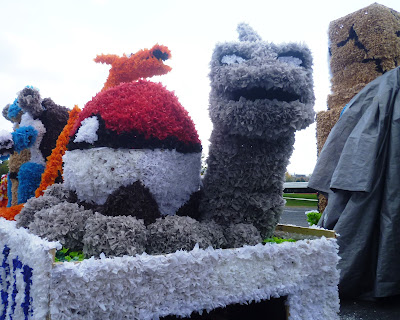 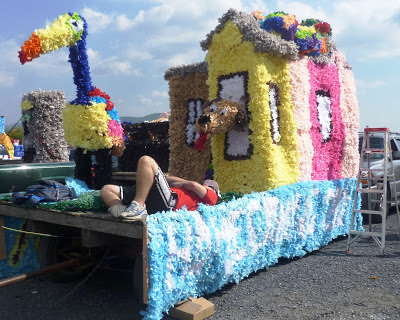 I had a chance to check out some floats in the staging area before the parade. As my co-worker Carol and I absorbed the local color, I said to her, "If anyone asks, tell them we're journalists." (I find myself so amusing.) The floats are elaborate constructions of two by fours, chicken wire, and tissue paper, all mounted on a hay wagons. Some of the floats were very nicely done, and others, well, they seemed as if the Greeks who built them ran out of time and creativity before they'd something put together. I had no idea what lots of the floats were supposed to represent. Where was the giant birthday cake decorated with the words "Eat Me", as in Animal House?  I did, however, notice that a couple of the entries came equipped with a sleeping college kid and thought that was a nice touch. 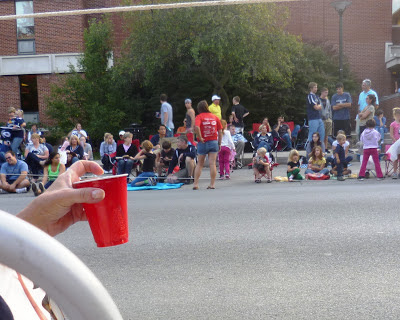 Many chose to wait for the the parade with an adult beverage. 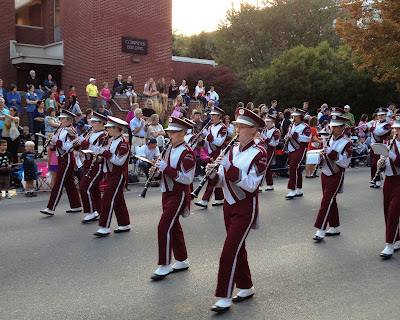 We didn't have long to wait before the Penn State ROTC units marched down the street at the head of the parade. They were followed by the State High band, convertibles filled with the homecoming court, academic units (Penn State Thermodynamics Majors) and nationality groups from all over the globe. I had no idea that there was even a Most Serene Republic of San Marino Student Association. 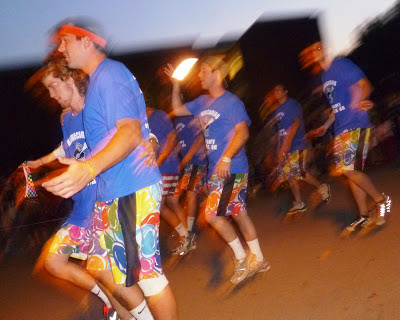 There were clubs in the parade, too, like the Shorts Formerly Known as Jams Alliance. One of the convertibles was toting Pennsylvania's Alternate Dairy Princess. Seriously. My guess is that there was a scandal involving the actual Dairy Princess and racy photos in Hunk & Heifer Magazine.  Hence the Alternate Princess sitting in and doing the waving and smiling thing in place of the real deal. 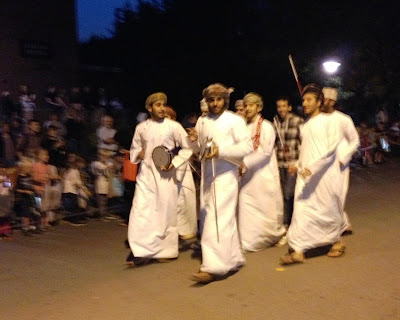 The Penn State Jihad Club was there, 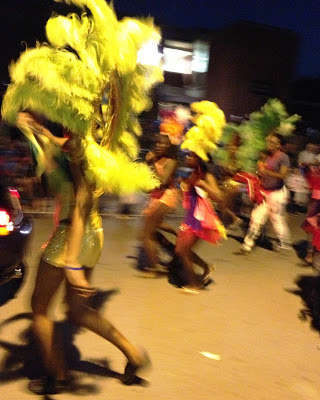 as well as the West Halls Samba-ettes. 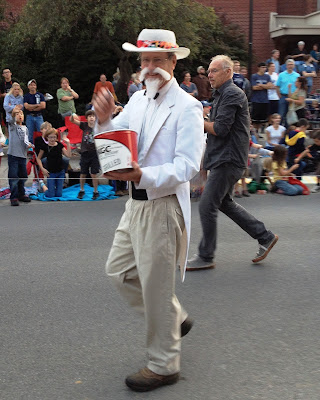 Which came first, the chicken.... 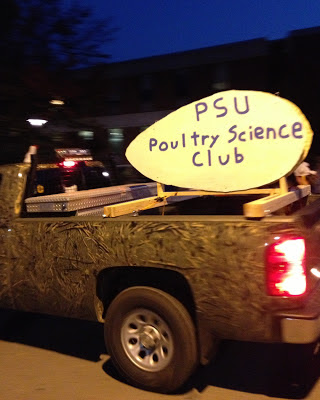 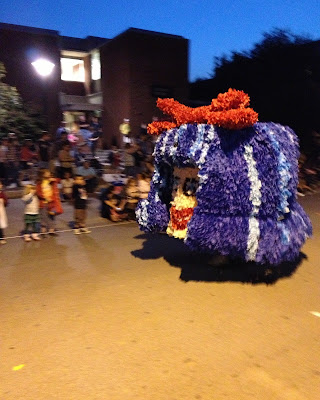 This entry reminds me of Holly Goodhead, the CIA agent in the James Bond movie Moonraker. 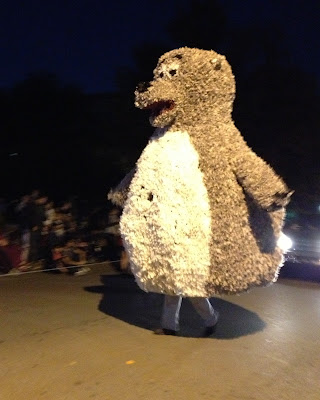 I understand that this entry is being recycled by Key West Bearfest. 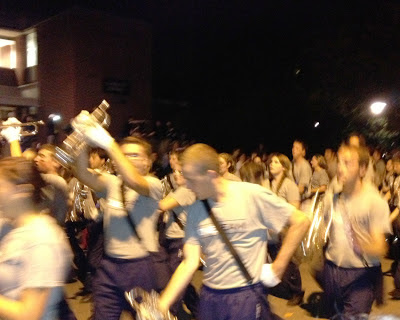 Since the NCAA's sanctions don't apply to homecoming parades, the parade went on, and on, and on some more. Eventually the Penn State Blue Band came down the street, signalling the end of the parade. They were dancing rather than playing, and wearing grey t-shirts and workout trousers instead of real uniforms. It's apparently how they do the Homecoming Parade these days. Who knew?! I'm sure that several former Blue Band directors were rolling over in their respective graves.  It was a good reminder that one man's heresy is another man's tradition, or as they say in Penn State homecoming-speak, The Glory Echoes On.