Judging a Bookworm By His Cover 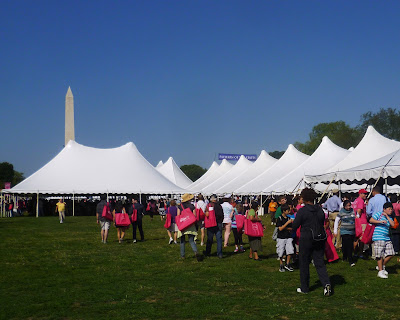 The other day I went to the Library of Congress Book Festival.  I was going to D.C. for an overnight to see college chums and it just happened to start the next day.  I’m a complete geek and love book festivals (yes, I have actually been to more than one) so it was as if I’d just stumbled into going to San Francisco during an Indians-Giants World Series. In other words, big fun. I looked at the list of authors—wow, authors I’d heard of—and even read!  Usually these things are heavy on writers of bodice rippers and mysteries, and I pretty much stopped reading mysteries after The Hardy Boys and the Case of the Missing Protractor even if I still have an open mind when it comes to bodice rippers…

So there I was on Saturday morning, only slightly hung over (a visit with my college chums will do that) in a remarkably crowded Metro car on my way to the Smithsonian stop on the Orange Line. 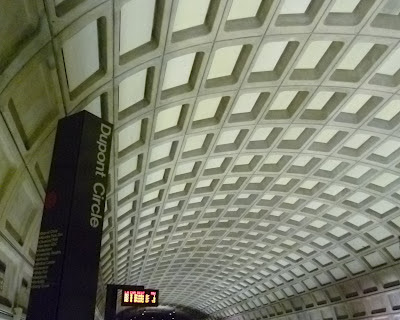 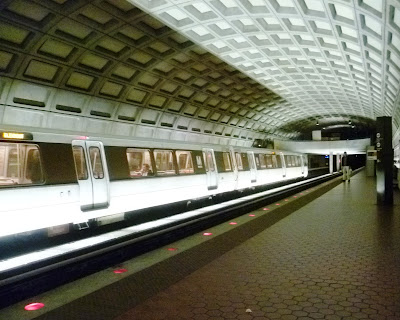 Perhaps it’s just because I live in Hooterville, but I love the DC Metro. The stations have that James Bond meets The Time Tunnel feel, and for public transportation it’s quick and clean.  And for someone who lives in Hooterville, well, the patrons put on a real live fashion show.  Out in the burbs (as in Shady Grove) people are sometimes chic but still suburban looking, and when you’re near Dupont Circle, the European or gay quotient goes through the roof, and then when you get closer to the monuments and museums, the frumpy tourists are as thick as the over mayoed potato salad Aunt Marge brings to covered dish suppers at the Methodist church.

In my slightly hung over state, I didn’t think they could all be going to the Book Festival—surely some of them had to be going to see the Zimmerman Telegram at The National Archives, Michelle Obama's Inaugural Ball Gown over at the American History Museum, or even John Dillinger's, well, you know, in that shoe box at the FBI headquarters.

But no, they were all going to the Book Festival. 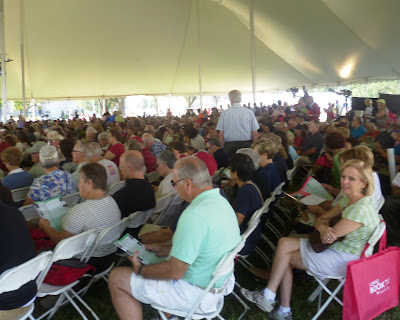 The Festival was huge, and it was packed. And really, it’s good to know that Americans still read books. However, the thing I learned about going to an event with a bunch of people who have spent their entire lives reading under a blanket with a flashlight is that they don’t know that you don’t stop in a crowded Metro stairway and open a map. If they’d ever gone to a stadium, or been in a crowd anywhere, they’d have figured it out. But no such luck.  So getting around in the midst of all those inadequately socialized people was a bit of a challenge.  Actually, not all of the people were inadequately socialized. There were some perfectly socialized kooks in costumes who didn’t seem to be part of the festivities. Had I not been partially hung over, I might have even snapped a decent photo of one of them. 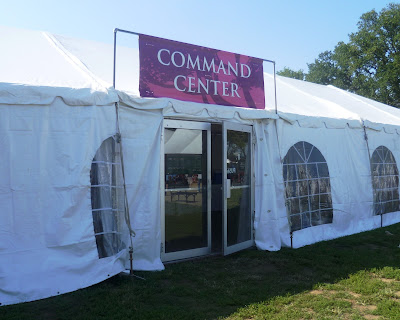 I loved that one of the tents was called the Command Center. I could just see something that looked like Winston Churchill’s War Rooms under London during The Blitz. No doubt there was an enormous map of the festival surrounded by tiers of seats filled by women in uniform receiving updates on headphones and then relaying the info to other women who would mark the locations of Lisa Scottoline and Jeffrey Toobin et al by moving little wooden figures around the map. 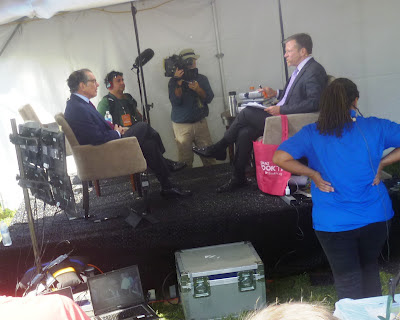 I went to hear Walter Isaacson first. He was fine, but he sounded a bit as if he’d given the same speech at one too many Rotary Clubs. I also heard Robert A. Caro, who was amazing.  I’m pretty sure he’s 1,000 years old, and is writing his multi-volume LBJ book on a typewriter. Crazy.

I should have asked one of the mystery writers present to explain to me why Robert A. Caro was being escorted by a hot 30 something woman in a tight black cocktail dress….at 10:00 a.m. Perhaps she was his niece.  Yeah, that makes sense. She was his niece. 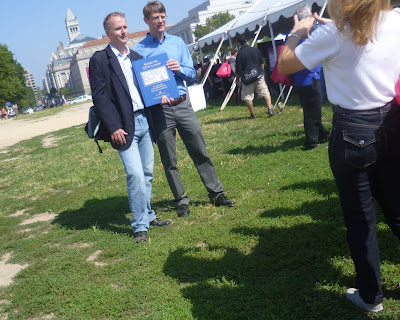 Every now and then I wandered by someone surrounded by a gushing throng of members of the public with cameras.  Maybe I should have known who those folks were. Or maybe not. 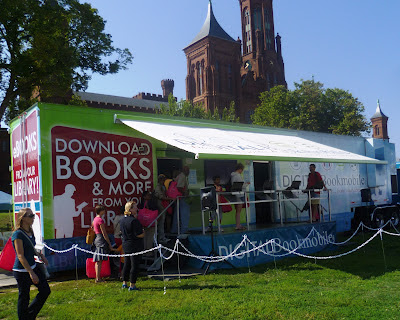 I could only stay for the jiffy tour of the book festival (and digital bookmobile) since I was due in Charlottesville for a function, but it was a fun time and I’m definitely going back next year. 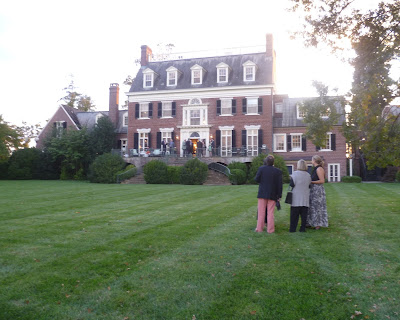 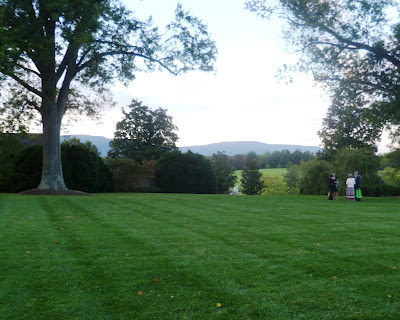 I was back in Charlottesville for an annual architecture school dinner. When they have it in an interesting place I go, and when it’s someplace boring, I skip it. This year it was at a “farm” near the little town of Crozet. As farms go, this was one even Lisa Douglas would have loved. The Big House was designed by William Lawrence Bottomley and the gardens were designed by Charles Gillette.  I hate to drop an F bomb in front of a family audience, but the word Fabulous really does not do the place justice.

The invitation called for “Festive Dress”.  That wasn’t covered in my 1941 edition of Entertaining is Fun by Dorothy Draper, so I asked one of my friends what he was going to wear. He told me he was going to wear a dark suit along with a bright necktie.  Yes, that’s festive….if you’re Amish. 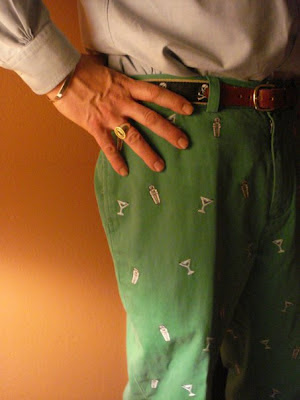 In lieu of a dark suit and bright tie, I opted for my $9.95 bright green Ralph Lauren martini trousers and an equally $9.95 sand colored J. Crew linen coat, locally sourced from the State College Goodwill store. With a pink oxford, Liberty of London tie, skull and crossbones belt,  and some black loafers (e bay) I thought I looked pretty snazzy.  But I’m getting ahead of myself.

As I was dressing for the party, I was also trying to get the internet turned on in my hotel room and it just wasn’t working. So I finally called the front desk for assistance.  The chipper woman on the other end of the line said “I’ll be raht there with your code.” I thought to myself, "Wow, most places they just tell you, here you get a personal delivery!"

In a flash there was a knock at my door and I answered it only partially put together in my green trousers and pink shirt.  The chipper woman, now fully realized as attractive 30-ish who would look great in a tight black cocktail dress at 10:00 a.m. greeted me with “Don’t yew look festive!”  In my mostly gay but slightly bisexual mind I paraphrased Dustin Hoffman, “Miss Chipper Internet, are you trying to seduce me?” (Martini trousers have that effect on women, you know.)  I held my invitation up and said “I’m going to an event that required 'Festive Dress' (yes, I even deployed air quotes). Do you think that this is ok?” She said “Oh are ya going to a faahmm pahty? I think that’s purrrfect.“  This was the most festive thing that happened to my partially dressed self since a I answered the door clad only in a towel for a State College police officer who had come to my house for no apparent reason while I was in the shower.

Of course at the party, most people were establishing their artistic/intellectual cred in festive shades of black. Anthracite.  Midnight.  Sable.  Ink.  Onyx.  And of course, obsidian. Obsidian was very big. 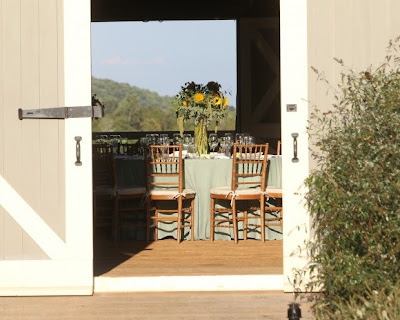 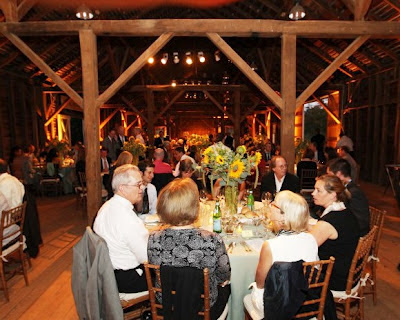 I was at table 13 in the barn turned party space where we chowed down on a gourmet meal of locally sourced stuff. I had a recent UVa arts and sciences grad on my left. She was there with her husband, a recent A-school grad and PhD candidate at MIT. They were both quite the lookers, and so I assume that MIT adopted UVa’s strategy of requiring a photo with the application in order to insure an attractive student body.  Dinner partner left told me that she did consulting, which in baby boomer euphemism means unemployed.  Later I found out that she was with a large national consulting firm familiar to any reader of The Wall Street Journal (even if you get it a day late as I often do). So she was an actual business consultant who earned zillions of dollars an hour to tell you not to do whatever bonehead move caused everyone to tell you to hire a business consultant in the first place.

Dinner partner right was an older woman, meaning my age or younger.  Her dates, i.e. husband and age twenty-ish son, chose to remain in another building on the estate watching a football game featuring two teams I always root against. I secretly wished that this would be the night that a blimp loaded with a dirty bomb or at least tons of dirty sweat socks crashed into the stadium.  A guy can dream, can’t he? Since she was, like me, desperate and dateless, we had plenty of time to chat.

It turns out that in a former life she was in the court of the Mardi Gras queen in Mobile, Alabama. “It’s just Mobile, not Mobile, Alabama,” Who knew that Mobile was like Beyonce, Madonna, and Cher and had only one name?  At some point I asked her about her official debutante dress and in an instant she lit up like one of the marquees on the Las Vegas Strip. She confessed that in all the years since her turn in the Mardi Gras court no one had ever asked her about her frock. So I got lots of details, not just the Readers’ Digest version. It would have been nice to have had Tim Gunn there to help with the semiotics of haute couture not to mention technical jargon (e.g. “bustline”) but I followed along to the best of my ability. I’m sure that the next person who asks will get photos, construction drawings, computer modeling, and fabric swatches. That is, if she hasn’t yet developed the phone app with scratch and sniff capabilities. It was, in two words, quite something.

Oh right, and how can I forget that she said I was a snob?

There were the usual after dinner speeches and then some laughs with some festively turned out young alums who, interestingly enough, lifted the lid on bathroom humor before I did. It’s nice to see young folks turn into contributing members of society who still appreciate fart jokes, no? I left for the bright lights of Charlottesville before they begged me to go to the after party which I'm so sure was about to happen. 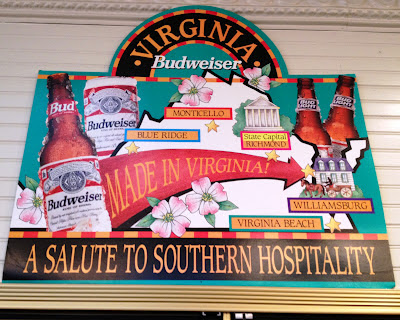 The locavore-erific food was tasty, but I was still stopped at a convenience store for a six pack of beer and a bag of pretzels on the way back to the hotel.  As you probably guessed, I needed something to slake my thirst and nosh on while I stayed up late with my head under the covers, reading by flashlight.
Posted by Rick Bryant at 5:25 PM