Go Out There and Win One for Mr. Jefferson

I’ve been to three Penn State UVa football games in Scott Stadium. The first time was in 1988. I went with friends who endured all sorts of travel disasters: canceled flights, dead car, and the always popular amorous seatmate. Penn State put the big hurt on UVa starting at about a minute into the game and never let up.

My second Penn State game in Scott Stadium was in 2001. That game was delayed due to the 9/11 attacks and not played until December. It turned out to be a beautiful day, and the Wahoos carried the day 20-14 somewhat to the dismay of my Penn State rooting family.

In the modern era, both Penn State and The University (that’s UVa) are having some “management issues”. Penn State is embroiled in the Sandusky scandal and is trying to live through a vocal cadre of alums who want to canonize Joe Paterno while certain members of its Board of Trustees seem to model their behavior after performers from the World Wrestling Federation. Not to be outdone, UVa’s Board of Visitors fired the school’s president in a fit of “strategic dynamism” in June and changed its mind after two weeks of protests by faculty, staff, students, alumni, and peasants with torches and pitchforks.  The only thing missing from that episode was a slew of sunglasses-wearing middle-aged generals draped in medals appearing on the balcony of the Presidential Palace. 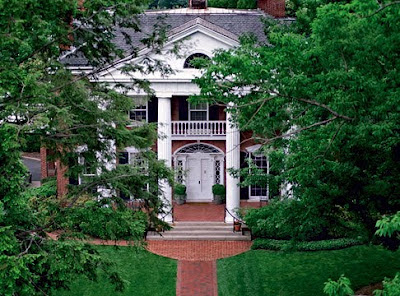 Thanks to my status as an SNK (single, no kids) and very un UVa like high level of gung-ho-edness, I was invited, along with my sister and two friends, to Carr’s Hill, the home of The University’s President, for a pre football game reception before Penn State and UVa met on the gridiron on September 8.  Carr's Hill was designed by Stanford White and is sort of like Tara, that is if the O’Hara family had more money and better taste.  We were enthusiastically greeted on the portico at reception tables by really attractive Wahoos  (“How are yew?! I’m so glad you could join us!”) and before anyone mentioned that three of us were dressed in Penn State colors, UVa President Teresa Sullivan was greeting us at the door and dishing up the Southern hospitality. During the self-guided house scoping session, the four of us all noticed a framed photo of Jack, Jackie, Bobby, and Ted Kennedy taken at UVa at some time in the 1950s. I think it was put there just to make my Aunt Doris happy (sarcasm font).

The rest of the public rooms featured the normal stuff: antique furniture, 19th century portraits, and a bar staffed by retainers who were as old as the house. 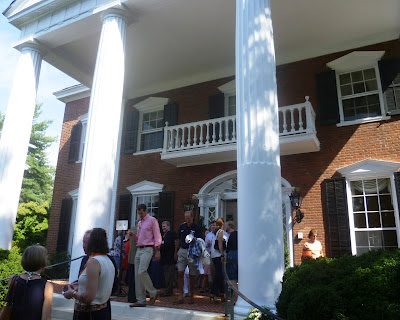 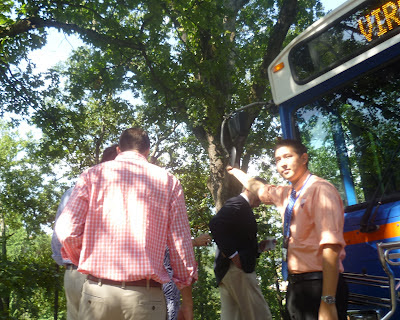 After mingling and a drink or two, we got on the University Transit Service buses and went, under police escort to Scott Stadium and our seats in the President's Box.  As much as I love driving to Beaver Stadium with my apoplectic at the slightest delay friend Phil, I have to admit, I could get used to this. 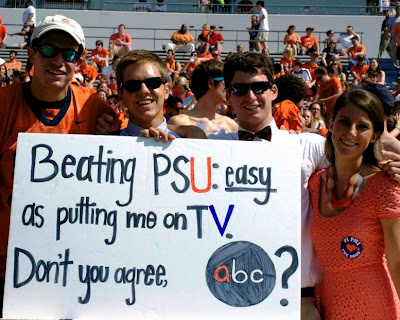 UVa Football has changed a bunch since I was a first year student living in Emmet dorm. As blog readers know, back in the day, which means the late 1970s, it was really Division 3 in Division 1 drag. Sure we tried hard (I think) but UVa couldn’t have tackled Miss Lillian Carter even if she was bent over picking up a Bible tract. 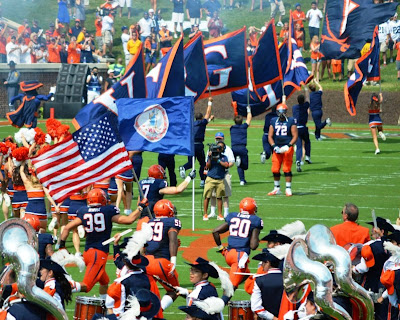 In between then and now both the Great Awakening and Vatican II have come to pass at UVa football. The Great Awakening means that some fans actually come to the stadium for football rather than to check out what Bo and Weasie are wearing and to see if Wendy (drunk again!) passes out in the stands. 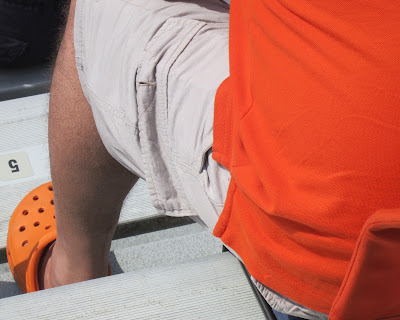 Lots of the faithful wear orange, which fortunately comes not only in tee shirts but also sundresses, Morphsuits, polo shirts, blazers, Crocs, and even trousers (that was me!). On this day at least, another tradition was continuing: the stadium wasn’t filled. 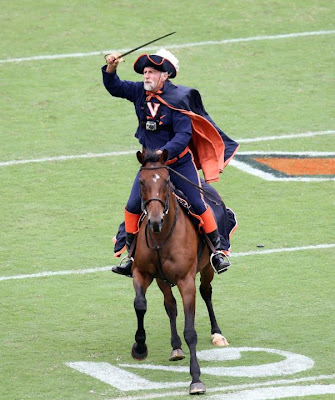 The Vatican 2 part means that there are new songs and traditions. There’s a real band— not just a scramble band— and a boy twirler even. There’s a Jumbotron with an school spirit video, which, I gotta admit, is great. And of course, what's not to like about a sabre rattling Cavalier who rides a horse out onto the field at the beginning of the game— even if he has a camera hanging around his neck? Like goings on at church when a new minister takes over the pulpit, I’m sure that I could adjust to the new stuff in a few weeks.  But like so many Virginians, I'm not sure I want to.

Life in the President's Box was great. There was lots of good food (including the always popular blue & orange M&Ms) and drink, and there was no line for the john. The seats were fantastic and they weren't bleachers so you didn't feel the effect of Large Marge taking her seat two places away from you.  In addition to my sister and her friends, there was only one other Penn Stater— who happened to sit right in front of us. This woman of a certain age— give or take ten years— walked in looking very UVa but before she sat down she took off her jacket to reveal Penn State colors underneath. When I got back to State College I consulted the jungle drum network and found out that she was someone's date and had bad Botox, or maybe it was collagen that was past the x-date. Bad work or no, she was an enthusiastic Penn State fan. 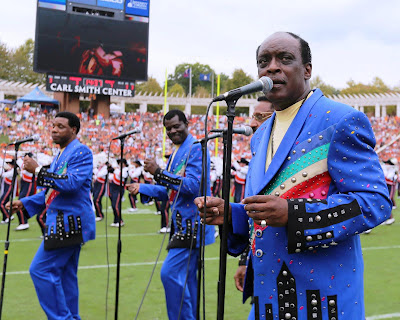 The halftime entertainment was The Temptations. Yes, the real Temptations. I know, I can hear you now: “How the mighty have fallen!” or "Rick Rick Rick, it’s just one step above the Grange Fair!’ To which, I say, “ No, it’s not. The Clearfield County Fair is one step above the Grange Fair. UVa football is better than that. Usually, I mean.”  I don’t know that the Cavalier Marching Band is made up of the world’s best studio cats, but they acquitted themselves well enough so that all the other middle aged folks around me were grooving to some of Motown’s finest tunes.

Later on, I asked some cute enough, younger Penn Stater what he thought of The Temptations. It turned out that he missed the whole show by heading out for a bite to eat and drink. He missed The Temptations for a Pepsi?! That's like missing the visitation of Our Lady of Guadelupe because you were in Sheetz buying an MTO! Shortly after hearing this, I cancelled our imaginary romance at major league baseball parks across the country, the ceremonial picking out of china, and having Elle Decor shoot our place in the Hamptons for its June issue. I suppose I should have suspected as much from a guy whose drink had an umbrella in it.


Since I wasn’t able to get out of the Presidential Box at halftime (no way was I missing The Temptations) I had to rely on FB for these photos of the the scene. 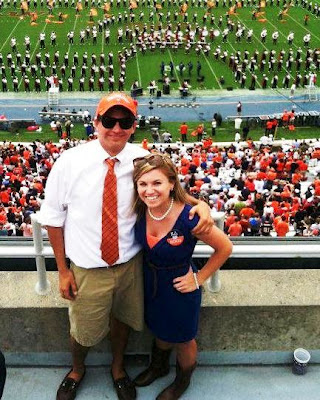 I like this photo because it says to me, "Hey, sure I'll pose for a picture, but let me put my rum and Coke down first." 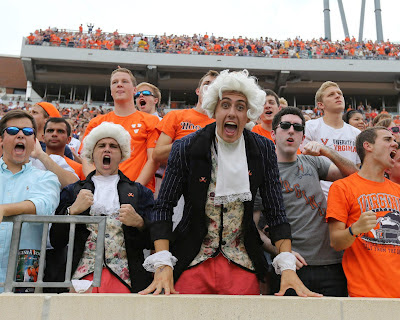 As I pointed out some months ago, people don’t bring nearly enough signs in Latin to football games. People also don't wear enough quasi 18th century dress. Maybe I'm missing something here---after all, all the guys around them are acting as if the two kooks in the embroidered waistcoats are completely normal. James Bond (among others) would be glad to know that collar and cuffs match. 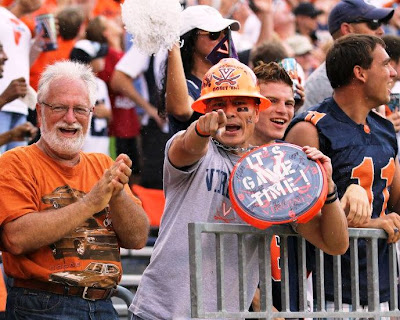 After the game this guy is going back to his day job of working the minor league baseball park circuit in a Village People tribute band. 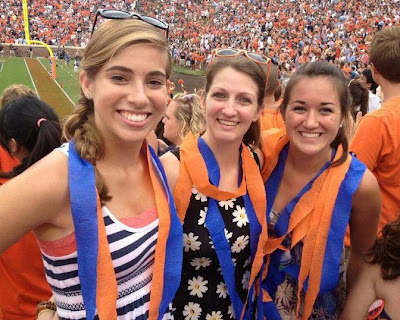 My sister said that it was the land of the beautiful people. And yes, for whatever reason there were lots of lookers there. I was reminded that on my college application that I had to staple my photo to the upper right corner of the application because UVa was under some consent decree or something.   Or else they wanted to make sure that I really did have hair like Glen Campbell and wear the same kind of loud plaid sport jackets favored by Gerald R. Ford. 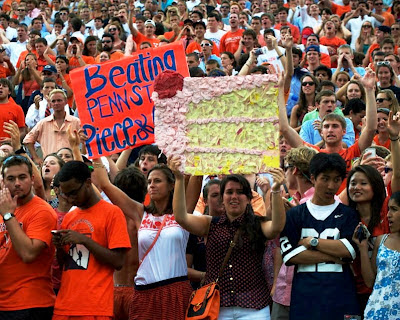 I love this photo. I can just hear the kid in the John Cappelletti jersey saying to the equally appalled woman next to him: “ Check it out. This chick with an orange purse brought a rebus to the game. Is that whacked or what? And that dude three doors down, I bet he's texting his mother!!“


Towards the end of the game there was a lighting warning, UVa scored, Penn State didn’t, and the Cavaliers carried the day. It was a pretty darned good day of college football. Ok, UVa’s win might be a miracle, but hey, at least I wasn’t in Sheetz getting an MTO when Our Lady of Guadelupe came.
Posted by Rick Bryant at 6:08 PM