The Miracle of the Loafers and Fishes 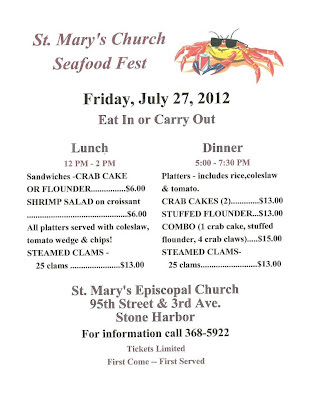 One day in late July I saw a notice in the window of the Stone Harbor Chamber of Commerce that St. Mary’s Episcopal Church was having a Seafood Fest, which is what people with less marketing savvy would call a crab cake dinner. The event was advertised with a very attractive flyer featuring a crab in Wayfarers holding a can of beer. I know it was beer since the event was taking place at the Whiskeytalian, I mean Episcopalian, church. Had the event been at the Methodist church, the crab would have been wearing less stylish shades and clearly holding a can of a generic soft drink. The flyer noted that there were a limited number of tickets available so patrons were advised to arrive early. Jesus may have fed the multitude with loaves and fishes but the Gospels are mum when it comes to talk of printing additional Seafood Fest tickets. 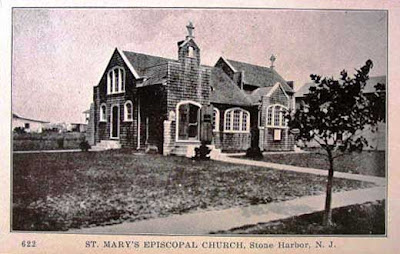 St. Mary’s is a petite Shingle Style church in Stone Harbor’s downtown, across Third Avenue from the Stone Harbor Wawa and Springer’s Ice Cream. I’d been to a rummage sale at the church once and bought a cocktail dress, complete with its $900 price tag (Saks Fifth Avenue, natch) for a dollar. No, it was not for me. But my friend Blonde Pam liked it, pretty much fit into it, and I think even wore it someplace. I’m not sure if she took the price tag off or not—not because she’s a latter day Minnie Pearl, but because, well, she’s Blonde Pam. But I digress... 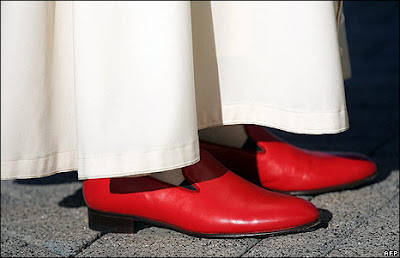 My first clue that the Seafood Fest was going to be a special event was when I got Pope Parking behind the church. I know, I know, Episcopalians don’t recognize the supremacy of the Pope, except in the shoes department, I mean, those red kicks the Pope wears are Prada, for God’s sake! Pope Parking is what those of a more secular bent call “rock star parking”. In other words, it’s parking as close as you can get to your destination but still in a legal spot. Illegal parking, as in parking on the sidewalk or lawn, would be Anti-Pope Parking.

Fortuitously, the parking had even more Pope-ness about it than usual since there was twenty-five cents--free for the taking--hanging out of the slot and the meter was broken. I stopped and pondered. Was this some sort of moral test? Could I keep the quarter and just leave the next guy free parking courtesy of the broken meter, or should I give the next parker the daily double, a quarter and free parking? What’s that called, paying it forward? I didn’t know what to do except to stand there and chuckle at the punch line of that old joke: “Who gave you the quarter?” “Everyone.” As blog readers know, I find myself so entertaining.

Leaving the quarter there, I walked over to what looked to be part of the Fest. There were two jolly Episcopalians attending a clam steamer under an E-Z Up by the door to St. Mary’s social hall. They told me that they were just the steamed clam department and sent me inside for the main event. 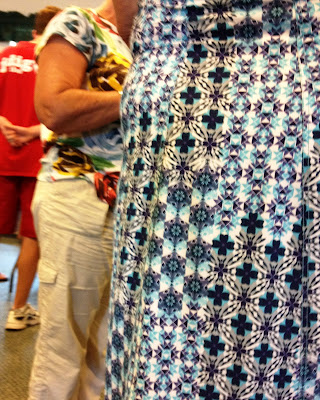 I was greeted warmly and told that I had to go to the ticket station at the back of the hall. Although there were only three people ahead of me in line, waiting in line took forever. Obviously people were paying in Canadian money. Oh right, I was in Stone Harbor…so it was whatever kind of money they use in Naples and Bonita Springs. When it was finally my turn to pay, one old gaffer took my twenty dollars and carefully chose a One Crab Cake ticket from the piles of different meal tickets in front of him. He directed his even older partner in crime to give me my change, which he got right—after a couple of tries. They then told me to go back across the social hall, give my ticket to a woman at the serving table, and wait in a different line. 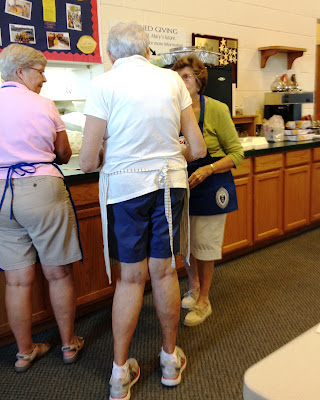 So I waited in that line, which for a while consisted of just me. There was a scrum of blue haired ladies in the kitchen and a separate gaggle of them huddling behind the serving tables. Perhaps this was the St. Mary’s version of “Animal House” and I was about to see a food fight. Or perhaps they were just somewhat disorganized and, as we would say at State College Presbyterian Church, enjoying a bit of “kitchen fellowship”.

After a while two people joined me in line—it apparently took them some time to get though the payment station as well. One was a cute, straight (dead giveaway: bad shoes), forty-ish business casual guy who obviously worked near the church someplace. You could tell he was working instead of on vacation since he was wearing a new polo, tidy Dockers, and—ugh—shoes that could have gotten him arrested by the fashion police in Dupont Circle, The Castro, or in parts of Lower Manhattan. Had he been a vacationer he would have been dressed like me: flip flops, khaki shorts that did everything for my bird legs, and a polo shirt that had been through the laundry one time three times too many. The other person in line was a chatty, attractive, blond thirtysomething soccer mom in a patterned wrap dress. She looked as if she might have been a girl jock until she discovered that field hockey practice took time away from boys, drinking beer, her black lab, and more beer drinking. None of us knew each other, though I would have been happy getting to know each of them. In different ways, of course.

The business casual guy leaned over to me and, in a voice that mixed a chuckle with exasperation, said that he didn’t know what the holdup was, that all the meals they were preparing were the same. I laughed and looked around the room before responding that I was just glad to know that there were people older than Presbyterians. (Score: Rick 1, Locals 0). As she pushed her sunglasses to the top of her head, Ms. Wrap Dress chimed in with “Oh my God, with the week I am having, anything is better than cooking!!” I half expected her to pull a cocktail shaker out of her Coach bag and ask each of us if we wanted a Cosmo. She was the kind of soccer mom my father would have called a “kick in the ass”. That was a good thing. I've never quite figured out the expression, but like the Supreme Court and pornography, I know a kick in the ass when I see one. And Ms. Wrap Dress was definitely a kick in the ass. 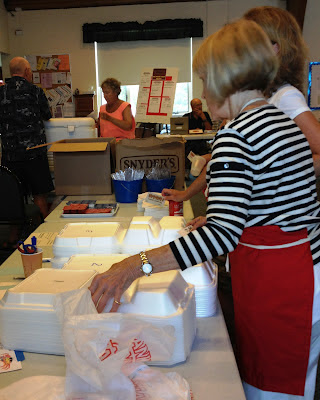 Apparently there was some issue in the kitchen with the accessorizing the crab cake (or flounder) sandwiches properly with coleslaw, tomato wedge, and chips. Or maybe they were talking about what Harriet wore the night before when they played bunko over at the Women’s Civic Club. The three of us waiting in line never did find out. After a bit, the confusion died down and a charming woman in an Anna Wintour haircut and resort wear handed me my Styrofoam take out container and I was on my way to the door. I was just about out of the social hall when one of the serving ladies called after me to say that they’d forgotten to give me my chips. I pointed to the business casual guy, and in a moment of church inspired hospitality said “Give mine to him; I’m sure he’ll enjoy them.”

It might not be loaves and fishes for the multitudes, but in my church, giving a guy in bad shoes a bag of chips is its own kind of miracle.
Posted by Rick Bryant at 9:36 PM