Before the advent of the Facebook, Twitter, Foursquare, and God Knows What Else, social networking involved things like smoke signals, passing notes in class, the telephone party line (and its latter day cousin, speed dial), and, of course, sleeping around. 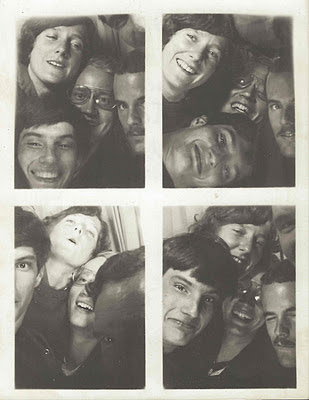 The photo booth was also a primitive social networking device. Friending someone on Facebook is nothing compared to the 3-D friending that took place in a photo booth. You have to be pretty darned social to cram your network into something the size of a linen closet, partially shielded from the public by a too short deep green curtain. Social lubricants (e.g. alcohol, not KY, a different kind of social lubricant) often helped in Martha Graham-esque movement that passed for the creative process before the flash of the camera. The default option was four small prints, so in theory you could cut the the photos apart and trade them with your friends, as if they were a homemade Boog Powell rookie card. 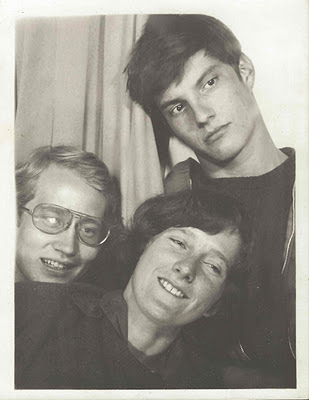 Some of my best photos came from photo booths. I guess that means that I'm better interacting with a camera hidden behind plate of glass in a space the size of a linen closet than I am with actual human beings.

Yes, I know. That's your surprised face.
Posted by Rick Bryant at 9:19 PM