My Life in Pictures, Part Two

Do you remember how in the The Wizard of Oz, the movie went from the black and white of Kansas to the bright Technicolor of Munchkinland? Well, that happened in my biographical chat, too. The ancient stuff is in black and white and the merely super old parts are in washed out Kodachrome. 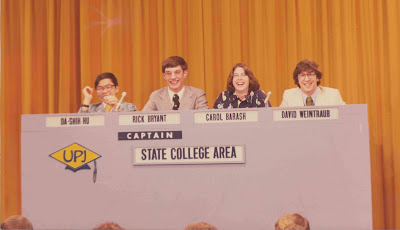 I couldn't believe that I found this photo of my State High Scholastic Quiz team. Where did it come from? That's me, sitting right next to the famous Da-shih Hu. I remember that the opening of the show was "Match wits with the scholars..."  I am sure that you are shocked that they didn't open with "Throw a touchdown pass like the scholars!" or "Hit a perfect three wood like the scholars!"

Who knows which set of scholars we were matching wits with, but the photographer from Channel 6 (serving millions from atop the Alleghenies) did a nice job of showing only the tops of their heads.

Our team made it all the way to the finals before succumbing by just ten points to Bishop McCort High School, the Catholic high school in Johnstown, in the third game of a three game final match. The final question in the last game was how many knuckles a nun teaching driver ed could whack with a ruler while demonstrating parallel parking in front of a liquor store. We never had a chance! Oh well...that's the way the toss up question bounces!

In my talk to my RULE classmates, I represented my college years with a photo of the Rotunda, the centerpiece of the Academical Village. But you already know what it looks like. It's a great example of Mr. Jefferson's genius as a designer, but that hardly makes it blog-worthy. 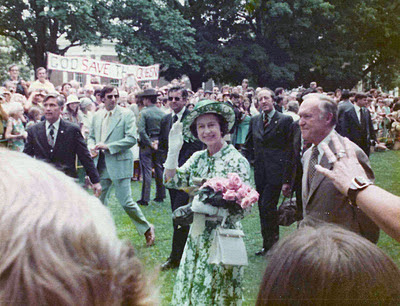 Instead, here is my close personal friend, H.M. Queen Elizabeth II. She stopped by UVa on July 10, 1976 to help celebrate the U.S. Bicentennial. She came to The University to make a speech, tie on the feedbag, and then learn to do the shag with some fraternity boys from SAE, with music provided by Doug Clark and the Hot Nuts. After the her speech from a stage set up in front of Cabell Hall, H.M. walked up The Lawn with University President Frank Hereford. 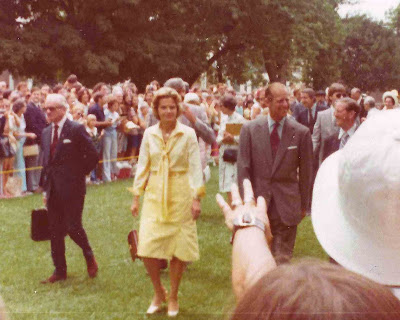 Prince Philip strolled along behind them at a respectable distance, enjoying Mrs. Hereford's company. Assorted functionaries and hangers-on brought up the rear of the official party. The Queen looked remarkably fresh in a green and white frock with matching wide brimmed hat. Prince Philip looked quite natty in a grey glen plaid suit. Perhaps attracted by my  Budweiser shirt (all class, I know), the Prince came over and chatted with my friends and me. I ran into a reporter from the local rag, The Daily Progress, later in the day, and was interviewed about my encounter with him.

Compared to today, there was quite a lack of security. Sure, there were Virginia State Troopers everywhere, but there there was just a simple rope separating the the public from the dignitaries. There were no metal detectors, or strip searches. Full body scans hadn't yet been invented. I didn't need a ticket, or need to send anyone my full name, date of birth, and social security number. Those were the days! 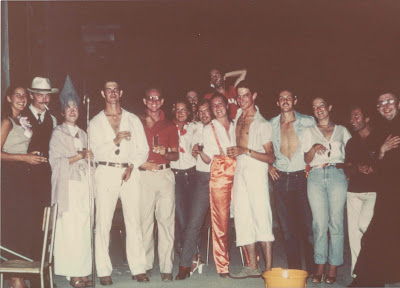 College not only meant foreigners coming to see me, but my going to see them in their native habitat as well. Here are my classmates and I posing on an outdoor terrace at the Convito San Filippo Neri, in Vicenza, Italy. We enjoying an especially culturally sensitive evening--a "Come As Your Favorite Italian" party. We had a Pope and a Mafioso making merry with at least one bona fide Italian priest (far right).

I have no clue what possessed me to dress as a sailor, but it seemed like a good idea at the time. Looking back on it, eons later, it was a sailor outfit as designed by Bob Mackie. I borrowed pants from some woman, so they were really, really tight in the painted on style popular in Italy at the time. They were really, really, short, too. In other words, Capri pants. Choice. Capri pants with suede bucks. Even choicer. I stuck an actual banana in my underwear to highlight the "Yes, I am glad to see you quotient" of the outfit. 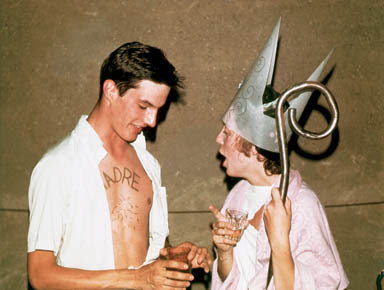 I tattooed my chest and added what my mother would have called a sweater (i.e. chest hair) with magic marker, since I was conspicuously lacking both a tattoo and chest hair in real life. Here I am talking to Pope Stacie the First. She made her papal mitre from mylar and decorated it with her circle pin, something in many a UVa co-ed's jewelery case. She borrowed the staff from a priest at the convitto.

Our party was August 6, 1978. It's not difficult to remember that date. Pope Stacie the First spent plenty of time leaning over the balcony railing drunkenly blessing passersby. It seemed like perfectly appropriate behavior at the time. Unfortunately when we saw the newspaper the next morning we found out that the other Pope, the actual Pope in Rome, Paul VI, died during the party. In the age of YouTube, this would have qualified as an international incident. In the 1970s, it was just drunken tomfoolery. 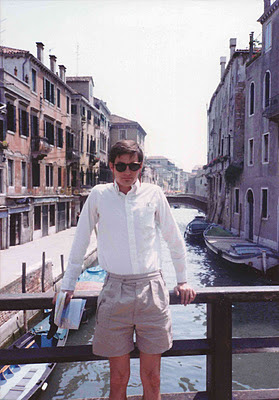 Nevertheless, when I returned to Italy a few years later, the State Department advised me to leave my friends, my capri pants, my magic marker, and especially my banana, at home and to bring a book instead.