That Time I Went to Lawnmower Races

On a recent Sunday afternoon, as I was a still a bit bleary eyed after Penn State’s thrilling win over Auburn the night before, I headed across the mountain to Mifflin County to Middle Road Speedway…to watch…are you ready for this? Lawnmower racing.

Even though it's within 30 miles of my house, I'd never heard of Middle Road Speedway until it—don’t ask me how—came up in a conversation with a waitress earlier that week. Wait, you’ve never talked to a waitress about lawnmower racing? I thought I was the only one! 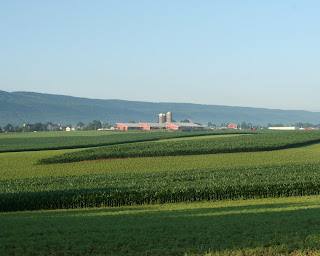 The track was a bit hard to find—there wasn’t a lot of cell signal where I was, so using GPS was a waste of time. I drove around a bit, soaking up the bucolic splendor of rural Mifflin County (Trump country!) before stumbling onto Middle Road. As far as I could tell the only thing Middle Road was in the middle of was the middle of nowhere.

I’ve been to another central Pennsylvania dirt track, Hesston Speedway, so I thought I knew what to expect. Wrong! Hesston has buildings, flush toilets, lots of bleachers, and actual parking lots. It’s like the Indianapolis Motor Speedway compared to Middle Road Speedway. Middle Road has no buildings, a no flush toilets, a bleacher (is there such a thing as one bleacher?), and no parking lot. This is a racetrack for minimalists. 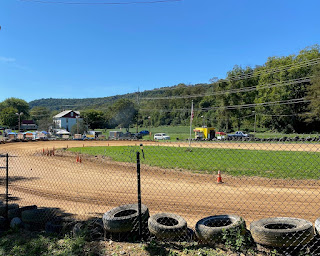 The track is a dirt oval, smaller than some suburban lots. It’s 1/10th of a mile, which makes less than half the length of a high school track. It’s ringed by old tires and some chain link fence.  Presumably they’re there as safety measures rather than to add a soupcon of gritty urban ambience. There are a few and I mean a few, sponsor signs fastened to the chain link fence, but they’re of the local variety, such as Charlie’s A Cut Above Chainsaws rather than for national brands like Goodyear or Valvoline. 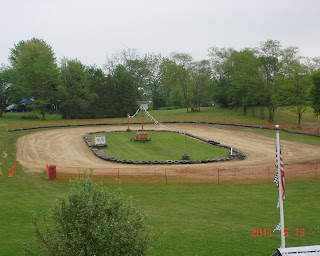 The track hasn't changed too much since someone posted this 2011 photo on Facebook.

I parked my truck on the lawn and walked over to the bleacher. There was a group of spectators sitting on lawn chairs arrayed behind their car, but I was the only person to brave the bleacher.  It looked as if it might have been decommissioned by a Little League team sometime before World War II.

There was a concessions trailer across the track from the bleacher. The announcer mentioned EMTs were from the McVeytown Fire Department, but I didn’t see an ambulance. If someone needed to go to the hospital (as in, if you suffered grievous bodily harm falling through the bleacher) they were going on a lawnmower. 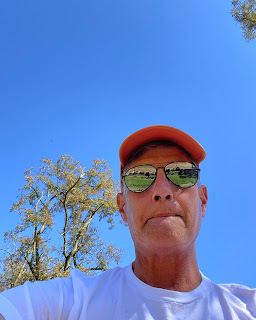 I made myself comfortable-ish and wondered how many people died each year from falling off a single bleacher at a lawnmower race. 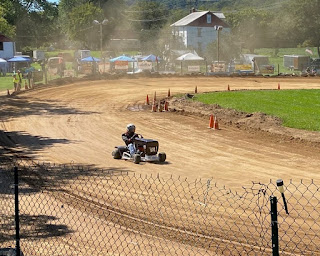 One lawnmower was zipping around the track. And I do mean zipping. It was faster than any self-propelled lawnmower I’ve ever driven. But it wasn’t really a lawnmower, since the mower deck had been removed…presumably in the interest of speed and safety.

In addition to shedding their mower decks, the little tractors obviously had a bunch of modifications (new gonkulator, etc.) to increase their speed. They didn’t sound like the lawnmowers in my neighborhood.

A short while later I was joined on the bleacher by a nice twentysomething couple. They vaped a lot. And I mean a lot. It didn’t take long before the fresh yet masculine scent of my Old Spice was replaced by an intoxicating mélange of vape-sourced strawberry shortcake and lawnmower exhaust fumes. The woman said that she hoped the afternoon’s races wouldn’t be as “redneck” as they were on her last visit. She told me that a couple of the drivers got into a fistfight that day.

Obviously, I’m a horrible person since I thought, “Oh, a fistfight…that would be a great story for the blog!” Your human drama meets my jaundiced eye! As Charlie Sheen would say, “Winning!”

It wasn’t long before an announcer came on the PA and said that warmups had finished and that they would be starting the main events shortly. He promised that “the girls” would come around selling tickets and 50/50 raffle tickets. 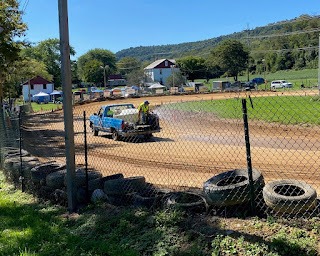 During the ticket selling interlude an old Ford pickup carrying a big water tank drove around the track wetting it down, as they do to a baseball infield.

The rig looked homemade but it did the trick.

“The girls” eventually made it over to the bleacher. I wouldn’t have called them "girls". I would have called them women who were younger than I am but still too old to know the names of any rappers.  Effervescent they were not.  Perhaps they had been sentenced to perform community service hours for displaying a Biden/Harris yard sign somewhere in the neighborhood?

Tickets were $5, but if you upgraded to the pit pass, $10. I had a ten spot and so told them I wanted the pit pass. They told me that they weren’t selling those—I had to go across the track for those. But they said, I didn’t need one anyway since no one would check. I could walk over there for free. Clearly no one explained the concept of upselling to them.

I told them that with my admission I’d take $5 in 50/50 tickets, even though I think 50/50 raffles should be relegated to their natural environment: Knights of Columbus functions.

I turned around and gave my raffle tickets to the vapers. I said, “this is for saving my seat while I walk through the pits”. I found this terribly amusing since we were the only people on the bleacher. They looked at me as if I were crazy. Perhaps vaping dulls one’s response to irony?

Since I had the “all clear” to see the pits, I went right away, before someone decided that I really did need the $10 ticket.  There were maybe ten or fifteen utility trailers that had been towed by pickups. It looked as if each trailer toted a few lawnmowers. The mowers were higher mileage than the ticket selling "girls"…I wasn’t sure if that was a good thing or not.

In addition to mowers there were some go-karts too. Apparently there are several different classes of these tiny speedsters. Most of them had some sort of race car body that looked as if it was made in a Mattel Vac-U-Form. Some had roll cages, too. I marveled that an adult with arms and legs could fit in any of them.

I got the hairy eyeball from some of the people in the pit area. None of the racers were doing much talking—it was sort of Clint Eastwood-y. I cocked my head to listen for the theme song to the Good, The Bad, and The Ugly.

And since I know nothing about lawnmowers or anything else that has an internal combustion engine, I didn’t’ stop and say, “Wow, I’ve never seen a Gravely with a gonkulator like that.” That didn’t seem like a high percentage way to make new friends. I didn’t linger. 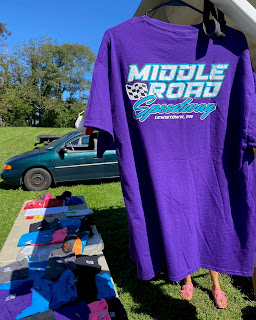 Yes, there was a merch tent. FYI, the feet with the pink plastic Birkenstocks are not included in the sale of a purple t-shirt.
As I was walking back to my seat, the announcer came back on the PA to announce the playing of the national anthem. Fortunately, it was a recording of some symphonic band and not a live performance by someone’s relative. Unlike at Beaver Stadium, the announcer did not need to remind spectators to rise and remove our hats. Everyone did it without being reminded. 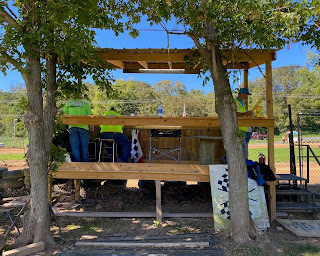 The announcer worked in a minimalist booth that was more Gilligan's Island than Mies van der Rohe. In fact, if you added some palm fronds and bamboo, Mr. and Mrs. Thurston Howell, III would have felt right at home. What they would have said about lawnmower racing is anyone's guess.

After the National Anthem, the announcer read the name and hometowns of the drivers as four lawn mowers drove onto the track for the first heat of the day. As they took another warmup lap they kicked up plenty of dust—even though the track had just been sprayed down--and made even more noise than during warm ups. 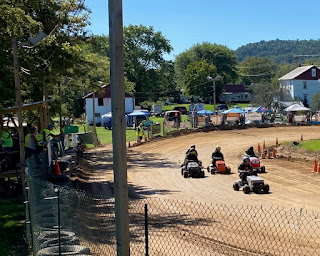 At the end of the warmup lap, as the racers came around to the front stretch, the starter waved the green flag—just like at NASCAR—and they were off.  The scrum of zippy mowers made it to the second turn when one driver lost control and his ride went into the fence. The red flag came out stopping the race as the driver got up, and dusted himself off. He seemed to be ok, but something was broken on his machine (the gonkulator, no doubt) and he pushed it off the course.

Once the remaining mowers got going, the race was equal parts exciting and scary. Those little mowers are quick. My grandfather would have said that they went like scalded cats.

In the second race, there was a more serious wreck. One of the mowers went into the fence near the pit area, wiping out a couple of the sponsor signs and a bit of fence. The EMTs walked over at the speed of guys who’ve just had a hip replacement. Even my vaping buddies commented on how slow the EMTs were. I started to think that the EMTs were Christian Scientists hoping that prayer would fix whatever was wrong with the driver.  It took a while, but eventually the driver stood up and waved to the crowd. 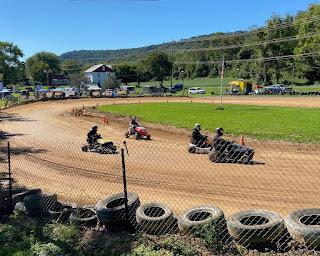 After that wreck the drivers seemed to get the hang of it, high tailing it around the course, occasionally on two wheels in a turn. And if you’re thinking that these men (and the occasional woman) have bodies like jockeys or fighter pilots…wrong. Lots of them looked as if they didn’t stint on the carbs or anything else for that matter. There was a whole lotta jiggling going on. I suppose if you're driving something with no suspension over a dirt track at high speeds, built in padding comes in handy.

After I don’t know how many races, it was time for intermission and they brought out the Ford truck to wet down the track again. 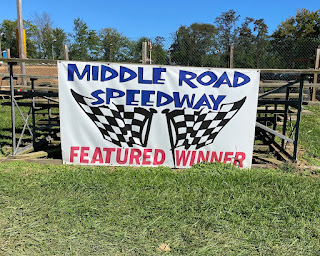 Even though I would miss the seeing the featured race, I decided that it was time say my goodbyes and beat the traffic--had there been any traffic. I would have stayed longer if there were going to be a fistfight, but alas, it seemed like everyone was on his or her best behavior.

There’s one more weekend of racing this fall, October 9 and 10. I'm up for a return trip. Shall I save you a seat?