A couple of weeks before Halloween, I got an email from my friend Michael Rosman. He’s a comedy-juggler (as opposed to a tragedy-juggler) slash agent slash all around good guy. He’s performed at both the Central Pennsylvania Festival of the Arts and at First Night State College.

Through the magic of cut and paste, I quote:

I need some people to help with giant puppets at the White House on Oct 31. Want to be a part of this? 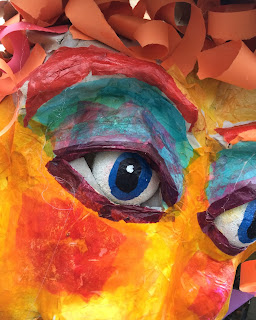 I don’t think Michael knew how much quality time I have spent with the Festival’s giant puppets, loading them in and out of a rental truck. Toting them here, toting them there. 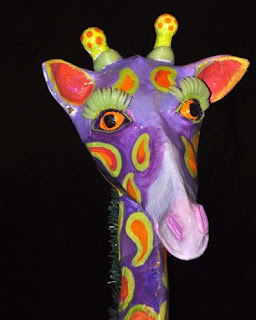 Being annoyed by their "Aren't I cute?" looks. 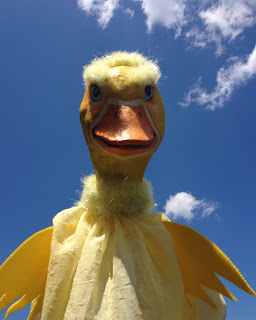 Being watched by them. 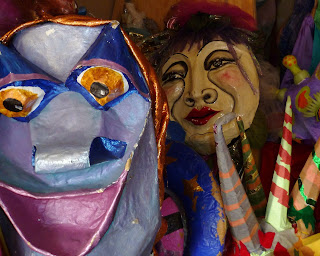 They’re cool and creepy but the public loves them.  Then again, the public hasn’t fumbled around in a panic in the dark for a half an hour on New Year’s Eve looking for the keys to the rental truck which is loaded with puppets and parked in a no parking zone when he was cold, tired, and hungry and had to be three places at once.  But that's not the puppets’ fault….or was it? They are creepy after all. Who knows what they really do with that negative energy... 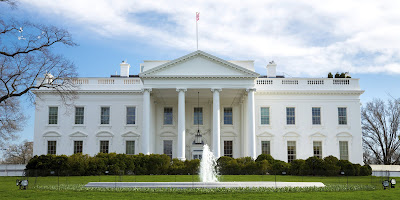 Even though I have no talent in the puppetry department —other than toting puppets around—I told Michael to count me in. It was the White House after all, not Epworth Manor in Tyrone, PA, right?

In a few days I got an email from the producer of the event asking me for my security info: name, date of birth, social security number, and so on.  And then in a few more days she emailed instructions about where to be and what to wear. We were also told to keep our traps shut about the job. As it says on the propaganda posters, loose lips sink jack o’ lanterns.

The gig called for basic black. No logos.  I had black socks. And sensible black shoes. And even a black shirt or two and a black fleece.  But my black trousers had shrunk in the closet since the last time I’d worn them. So, one trip to Walmart later, black trousers in hand, Mr. DeMille, I’m ready for my close-up.

Since my call (show-biz talk for when you need to be at work) wasn’t until noon on October 31, I spent that morning in Washington with my favorite (OK, only) niece and treated her to the finest breakfast that Au Bon Pain had to offer. 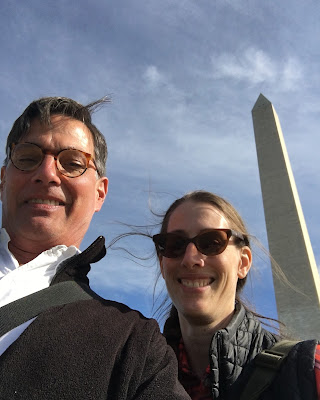 We walked around The Ellipse and then over to the Washington Monument and had a fab time of family bonding. 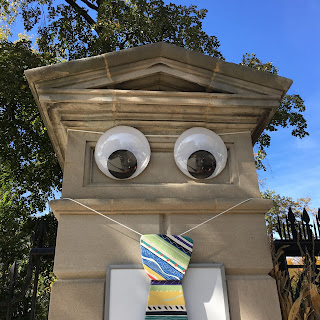 At the appointed hour I was at the appointed gate, dressed in civilian clothes, but with my all black duds crammed into my European carry-all.  I had to pass my ID through the fence, and then when the Secret Service confirmed that I was on The List, the officers let me in. I then went through security at a level someplace between that of an airport and a Turkish prison. 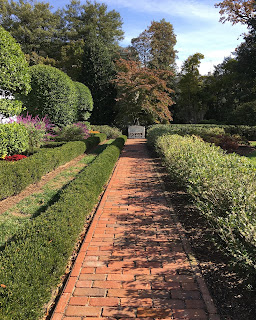 By this time there was a cluster of performers at the gate and we were all sent up the driveway to the backstage area in the Jacqueline Kennedy Garden. (It's lovely at this time of year.) I checked in again, and then began the most arduous part of the day. Waiting. And more waiting. We were to stay in the area, so it wasn’t as if I could go inside to check out the Blue Room.  The waiting felt endless. 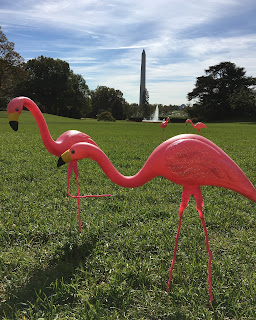 I had plenty of time to check out the outdoor décor. I wondered if the pink flamingos were a subtle John Waters reference. 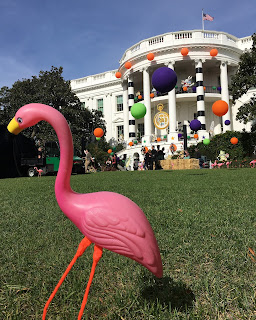 After an interminable wait. My fellow performers and I met with a Secret Service officer who gave us instructions about evacuating the grounds in the event of an “incident”. He also filled us in on the “shelter-in-place” order, which, to my mind anyway, sounded way worse than running for one’s life.

I thought, Holy Crap, what if I’m at the White House when there is a terrorist incident and I’m wearing trousers from Walmart?

I could see it being the lede in my obituary. 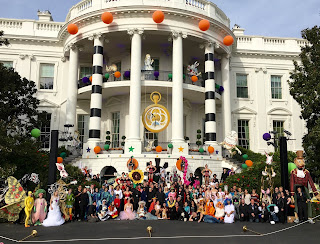 When the security briefing was over, we had a cast meeting. The cast was a mixture of actual professionals and students from the North Carolina School of the Arts, with a few of us untalented schlubs thrown in for good measure. We were advised to put our phones away and to save the social media postings until after the event was over. We scrunched together for a cast photo. 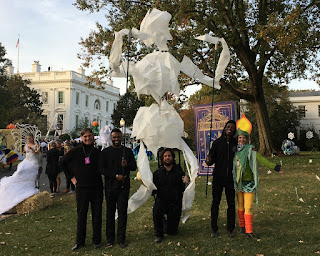 Following the cast photo, my fellow giant puppeteers and I met with Kate, our instructor and we learned to make magic with our giant Mylar puppet. My co-workers Nic (yes, Nic with just a "c"), Joseph, Khalil, and I took turns getting the hang of the thing.  They were expecting crews for two giant puppets but two of our fellow worker bees were no-shows. Can you imagine blowing off a gig at the White House? I can’t. 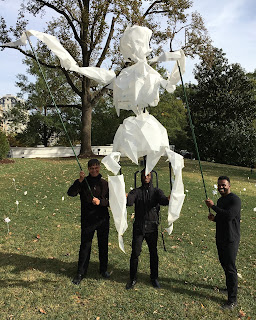 While Kate, the chief puppeteer, called him an Ice Giant, I thought he looked more like origami after a nuclear accident as imagined in a 1950s Japanese black and white sci-fi movie.

The puppet was constructed of PVC pipe, Mylar, nylon cords, and some battery-operated lights, all mounted on a backpack frame. The guy wearing the puppet moved his legs as if he were walking, running, or leaping, and the other two puppeteers were in charge of the arms. Kate made it clear that the puppet emoted with his arms.

He took some getting used to, but gradually the three of us got the hang of it. And by the time the kids arrived for trick or treating, I would say that we were taking not only small steps for man and giant leaps for mankind, but also were fully in touch with our feelings. For a giant puppet at least. I emoted better operating that puppet than I do operating my actual feelings. 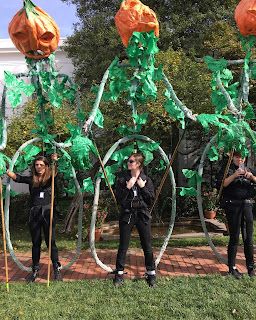 While we wanted to roam hither, thither, and yon with our puppet, we were assigned a patch of lawn along the driveway between the 15th Street Entrance and the South Portico. All of the performers had his or her assigned spot. 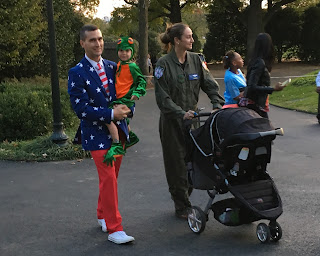 At the appointed hour, the customers, as in families with kids in costume, went through security and then, walked up the driveway where they were entertained by clowns, storybook figures, jugglers, circus performers, and best of all our GIANT PUPPET.  Once the kids got the South Portico, they would get their candy from the President and First Lady (while the parents immortalized the occasion with a photo) and the families would continue down the driveway enjoying more performers before they would exit the White House grounds onto 17th Street.

There would be two batches of kids and families—the first group, cleared to meet POTUS and FLOTUS (in DC speak) and then the sans-culottes who would suffer the indignity of getting candy from people who were not POTUS and FLOTUS. 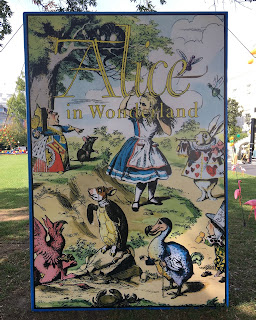 Since we were to put our phones away and work at what we were invited there to do, as in performing, I didn’t take tons of photos. I took some when I was on break, and that was it. Fortunately, I’m old enough to know that something is still real even if it’s not immortalized with a cell phone photo. 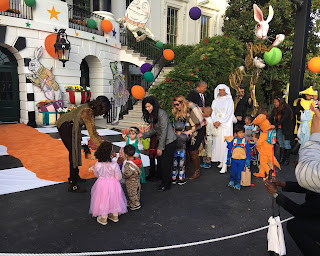 Alexander Hamilton was well represented—one kid was even carrying a giant version of The Federalist Papers with him. The crowd was ethnically diverse but I didn’t see a family that looked even remotely like a family with same sex parents. Perhaps they all had a better offer in Dupont Circle. 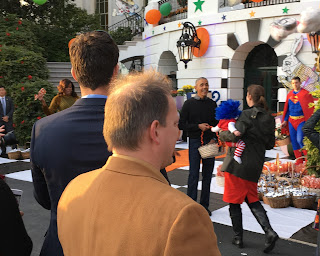 When I was on break I walked up the drive and to see if I could see the President and Mrs. Obama.  There they were, as plain as day. They’d been handing out candy for the better part of 90 minutes and they still acted as if each kid was their first trick-or-treater. I know that after the third trick or treater at my house I’m pretty much over it, so their performance was impressive. 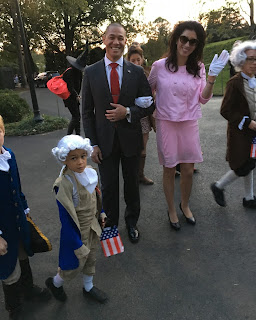 In the second group of trick-or-treaters, the sans-culottes, one of the mothers dressed up as Jackie Kennedy in a pink Chanel suit, complete with pillbox hat. This, as you know, is the famous outfit she wore to Dallas on November 22, 1963 when her husband was shot. While the trick or treater’s mother didn’t have blood and brains splattered all over the dress, it wasn’t what I would have picked to wear to the White House. To a Halloween party someplace else, sure. But to the White House? No way.

Around 7:00 pm, all the kids had come and gone. Nic, Joseph, Khalil and I took our giant puppet (which began to look much better once it got dark) back to the staging area. I walked by the South Portico on my way to the 17th St exit and saw that the President and Mrs. Obama had left but staffers were still there handing out candy to the last few trick-or-treaters. 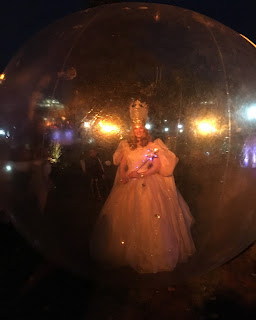 I was bushed from all that emoting but was sure to thank Glinda the Good Witch as I walked to the gate to hand in my security badge. I headed to the Metro without passing Go or collecting $200. Before long I was in the suburbs where I'd parked my truck.

It was great fun, the chance of a lifetime, really.

However, in the unlikely event that the next guy who lives at 1600 Pennsylvania calls about Halloween, I’m pretty sure I'm busy washing my hair. Halloween is scary enough without worrying about running into him.