Shop Until You Drop

There are many modern circles of hell. They include the Verizon store, waiting in line at the post office behind someone mailing all his worldly goods to a country whose name contains no vowels, and discussing current events with someone whose sole news source turns out to be Lindsay Lohan’s Twitter feed. Oh right, there’s also going to the supermarket at the Jersey Shore. 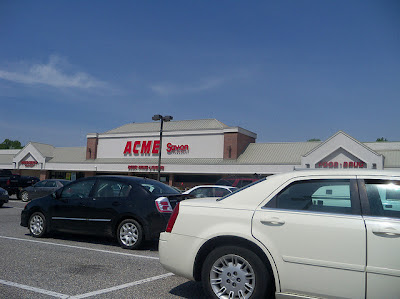 Whoever came up with one of New Jersey’s former tourism slogans---“New Jersey and You: Perfect Together” obviously never hung out at the Acme in Cape May Court House. Yes, that’s really the name of the town, though locals call it Court House. For all you folks who are fluent in Jersey, that’s Exit 10 on the Parkway.  There isn’t much perfection in a shopping trip to Acme.

For starters, the parking lot is a poorly designed sea of macadam and, in the summer anyway, more than a tad crowded.  There are plenty of cars parked near the other stores in the strip shopping center, so some folks apparently shop at those places, too. Do people really go to that scary looking nail salon?  Or to that excruciatingly bad Chinese restaurant? Or to Fashion Bug Plus (And Then Some)?  Apparently they do. Who knew?! 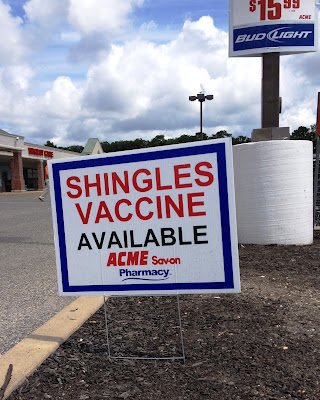 And because we’re at the shore, people in the parking lot are eager, no, make that anxious, to get out of there and back to their rental to start having real fun; like getting a sunburn, talking about playing miniature golf but not actually doing it, and going to the liquor store for a couple of handles of gin. Consequently, it takes more patience than I usually have to find a spot in the midst of parking lot mayhem.
When you finally park, somewhere near Bayonne (Exit 14 on the Turnpike), it doesn’t take long before you notice that you’re not in Happy Valley anymore.  Cars sport decals you never see in State College.  In State College, it’s no surprise the vast majority of school decals on cars are about Penn State. Sure, there is the occasional decal for an Ivy League school on some upmarket ride like a Volvo, but Penn State rules the day. At the shore, you see a wide variety of car decals such as: Barbizon School of Modeling, North Carolina Institute of Taxidermy, and, of course, St. Fill-in-the-Blank Prep.  There’s also the occasional bumper sticker that says “My Daughter Is a Goth at Monrovia Junior High.” 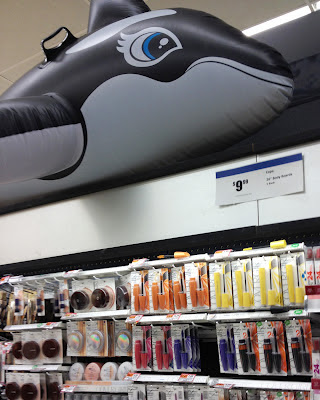 Once you make it into the store, you see that the chaos in the parking area was only foreshadowing of the chaos in Produce. And in the Bakery. Not to mention in Snack Foods (both sweet and salty). And everywhere else, too. Since almost everyone is a tourist, no one knows where anything is and shoppers meander around willy-nilly looking for a jar of capers or a box of Kraft Macaroni and Cheese dinner or an inflatable orca (hint: it's in the mascara department). 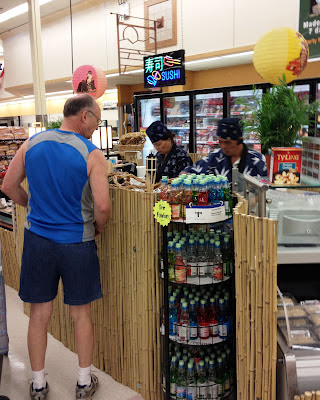 But hey, if you want sushi, there are two Asian people, working a little bamboo enclosure, and they’re wearing sushi uniforms so you know it’s authentic sushi and not the Mrs. Paul’s version. It all seems vaguely, well, culturally insensitive to me. I don’t know why the store manager didn’t make them wear plastic buck teeth, super thick eye glasses, and Kamikaze scarves around their foreheads. In for a penny, in for a pound, I always say. 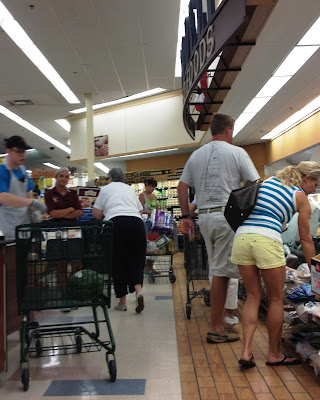 The deli section is a gridlock of shopping carts as people order stuff you’ve never heard of but want it sliced to tolerances worthy of NASA.  I’m often tempted to say, “Get a grip, lady. It’s just pimento loaf, not the heat shield on the Mars Lander.” 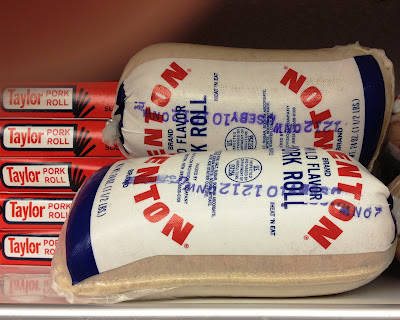 But hey, if you want pork roll, they’ve got it. Pork roll is the key ingredient in a Jersey Breakfast, which, contrary to popular belief is not a cigarette, a wad of gum, and a WaWa coffee.

When you’ve had all the fun you can take and it’s time to check out, you do the standard line roulette, hoping to get out before you become eligible for Social Security.  If you’re as lucky as I was the other day, your wait will be brief and you’ll meet the team of Cashier Marcia and Bag Boy Patrick.  I should warn you, there is the issue of her hairdo. Or hair don’t as they said in Hairspray. It’s sort of a Julius Caesar meets Betty Boop. My first thought was, "My God, don't you own a mirror?" Even by the low standards of community theater costume drama, it’s bad. And then on second look I wondered what was worse, her hair or her teeth, since regular dental care and fluoridated water have obviously not been a part of her life for quite some time.  As I stood there pondering this conundrum it hits me that her worst feature isn’t her hair, or even her teeth:  it’s her disposition. She’s like a bear with a sore ass. No amount of pleasantries, jolly banter, chit chat, or even the occasional bon mot is going to move her needle from the “I’m tired, my feet hurt, and I’m missing The Price is Right” reading on the deportment meter.

Bag Boy Patrick is, however, the good cop to Marcia’s Joe Friday suffering from hemorrhoids and a nicotine fit. He says hello. He smiles. He packs my L.L. Bean tote quickly and carefully. I want to nominate him for Employee of the Month.  If this were the movies, Cashier Marcia, playing Dorothy Brock, would twist her ankle trying to scan a runaway watermelon and Bag Boy Patrick, in the Peggy Sawyer role, would go out there a bag boy but come back a star, I mean, cashier.  But alas and alack, it’s real life. And I can’t daydream too much as Bag Boy Patrick loads my groceries into my cart. If I do, I won’t have time to hotfoot it out of there to get my starter sunburn, then consider and ultimately dismiss the idea of miniature golf, and finally dash over to the liquor store before some tourist buys all the gin in town.
Posted by Rick Bryant at 9:50 PM