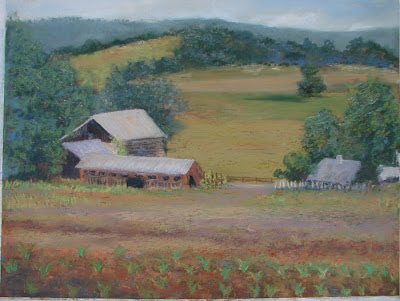 My friend Sharon McCarthy died this winter after living with ovarian cancer for umpteen years. Sharon asked me to speak at her funeral well before she died. She said I'd make people laugh. I didn't really think she was serious; surely she had better speakers in mind. After she died, John, her widower, asked me again to be one of the speakers at Sharon's party.

I know what you're thinking--why doesn't he just call it a memorial service? Well, it really didn't feel like a memorial service. People--perhaps 250 of us!--were happy, though there were lots and lots of tears. There was great food and drink, there were interesting new people to meet, and the setting--in John and Sharon's garden--was rural Centre County at its best. 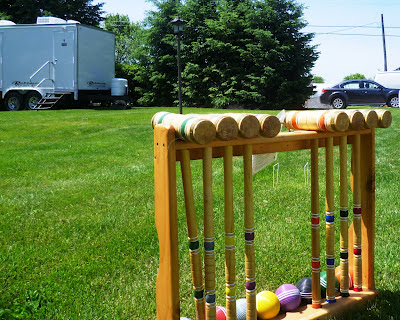 John even thought of croquet (very Sharon) and the world's nicest port-a-john. It had AC, running water, everything but an attendant to hand you a towel so that you could dry your hands while you worried about what sort of tip you were supposed to give the guy.

Anyway, here, thanks to the magic of cut and paste, are the notes for my remarks. John McCarthy was quite adamant about us sticking to a four minute speech, which of course no one did. Well, perhaps the guy who wrote the bit of doggerel, but he would have been the only one. The twenty-three eulogies ranged from quite serious to amusing, and the speakers came from all eras of Sharon's life.

Of course, in person, you get the ad-libbed Rick-isms that you don't get here. So you have to imagine me tripping up the step to the podium, or, of course, laughing at my own jokes.


I think it might be easier to bring lasting peace to the Middle East than to sum up Sharon in four minutes.

I met Sharon in 1999 shortly after I joined the staff of the Arts Festival —Sharon was the committee chair for our gallery exhibition, Images and we met to hang the show. Sharon provided the brains and aesthetic judgment and while I did the toting, hammering, and lifting, as well as being in charge of causing any industrial accident we were going to have.

It didn’t take Sharon and me long to figure out that we really enjoyed each other's company.

As our friendship blossomed, Sharon told me about her life, from her Lancaster county roots to living in California, to her time in Washington, DC, and then back to here to Pennsylvania.

If something interesting was happening, Sharon was there, like Zelig, the Woody Allen character:

At the Ambassador Hotel when Bobby Kennedy was shot?   Check

Democrat with a capital D and serial wife?    Check and check again.

Oh, and the most unlikely and therefore coolest thing of all. High school majorette.

Sharon wasn’t just some Pennsylvania Dutch version of Dame Edna Everage, dishing about all the important people she knew. Sharon was interested in me too, hearing about my life, listening to my opinions—political and otherwise, laughing at my jokes. That’s why Sharon was a great friend--not because she had an interesting life, but because she was interested in all of our lives.

Somewhere along the line, Sharon told me about her former friend Rita Jenrette. Yes, the Rita Jenrette who told the world that she DID IT on the steps of the U.S. Capitol with her congressman husband. Sharon told me that when Rita Jenrette bared all (and I do mean all) in a spread (so to speak) in Playboy, she and John drove around Lancaster County looking for the issue when it was hot off the press.

So in order to prepare this eulogy, I went to Penn State’s Pattee Library and trying to look scholarly, said to the woman at the help desk, “I'm speaking at a funeral on Saturday, and so I'm looking for the April 1981 issue of Playboy magazine. The deceased is in there. In the editorial, I mean."

To which the librarian replied, "You know, we don't get that question very often."

She very professionally looked up the call number for me and told me how to find the microfilms room.

So yes, there in the April 1981 issue of Playboy was Famous Congressional Ex-Wife Rita Jenrette showing all and telling all, including getting a little snarky—without naming names—about Sharon and her hot tub. As veteran of Sharon and John’s hospitality, I know that if Rita Jenrette didn’t have fun in Sharon’s tub it was because she didn’t know how to have fun. Even if she did boink the old ball and chain on the Capitol steps.

And as a former heterosexual, I checked out the other parts of that April issue. In case you were wondering, Miss April’s turn offs included taking down the Christmas tree. Apparently she was good to go the other 364 days of the year.  And, in 1981, a Brazilian was still someone who lived in that really big country in South America.

Some years after we met, Sharon joined the Arts Festival’s Board of Directors and she and John sponsored a prize for an artist showing wearable fiber.  She was a key figure in the success of our Silent Auction, an important fundraising event. Sharon’s retailing genius and her ability to throw a backyard storage barn, a bunch of low end art and craft items, fabric, and staples together and make it look like Nordstrom was to me proof that deep down inside of her, there was a drag queen trying to get out.

Did I mention that she was a majorette?

I could go on and on about Sharon—she was absolutely one of my favorite people, but as any of my friends will tell you, I don’t do feelings. In the interest of brevity, I’ll just say she was thoughtful and caring and bright and funny, and a helluva lot of fun, hot tub or no hot tub.

In summing up Sharon’s life, I’m reminded of another artist, Sir Christopher Wren, one of England’s most celebrated architects. Yes, I’m sure that’s exactly who you were thinking of right about now. Among other things Wren designed St. Paul’s Cathedral in London, where his tomb bears this epitaph:

"Reader if you seek his monument, look around."

Today, if we seek Sharon’s monument, look around. Sharon’s love and affection for John, her family: the countless thoughtful things she did for an army of friends both present and absent, in good times and bad, this lovely home, garden; and even this party, her monument is right here for all of us to see. We are her monument. Bricks and mortar will eventually crumble, but our love for Sharon, and her impact on us, will remain forever.
Posted by Rick Bryant at 8:18 AM