Yesterday I went over some plowed ground when I served as a judge for the Miss Cumberland Ag Expo Pageant.  Regular readers may recall that I was a pageant judge back in 2014…the year the emcee read the wrong name when he was announcing the winner. Oops! 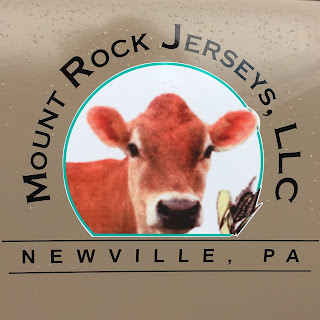 As a pageant vet, I had a good idea of what to expect this year when my friend Lizzie once again asked me to be a judger. Lizzie asked me to recruit another judge, so I asked my friend Pam if she were interested. Pam’s game for most anything and said yes right away. 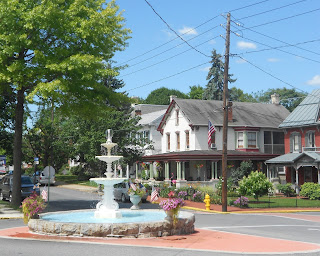 The Cumberland Ag Expo is in Newville, which is the one of the larger towns in You Can’t Get There from Here County.  Pennsylvania’s mountains run from southwest to northeast and getting to Newville from State College means driving east and then due south. The fields of corn looked great, and we sure passed lots of them when we weren’t driving up and down a mountain or two. Cell signal was spotty so we even used a road map to help navigate. It was almost like being back in the 1980s. 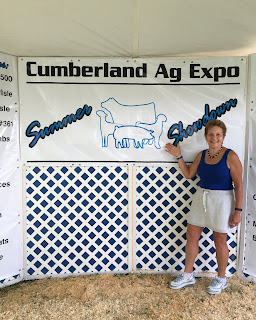 While it’s bigger than it was two years ago, the Cumberland Ag Expo is still pretty small. Even with the displays of new and vintage farm machinery, the occasional cow, I think the whole thing—soup to nuts—would fit in a football field. At best, two. 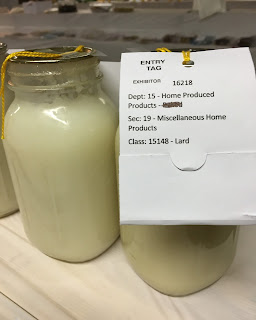 Pam and I had some time to kill before we were on the clock as judges so we checked out the exhibits building. There were the usual display of wilted flowers and vegetables that probably looked great a couple of days ago when they were picked. I did see the judges taking a measuring tape to a sunflower, and at almost 12 feet, it was plenty tall.

Over a dinner of a soggy hot sausage sandwich and fries (Pam, a vegetarian, wisely skipped the sausage), we met our partner in judging, Rosalie. Rosalie is a number cruncher (aka Specialist, Business Control Plan, Latin America Division) at Volvo Equipment’s huge facility in Shippensburg. She’s originally from Brazil and is here under some sort of Brazilian accountants’ visa.

Close readers of The Washington Post will remember that The Donald is looking to scale back visas for Brazilian accountants in order to expand the visa program for Slovenian models who are interested in in girl-on-girl photo shoots, Pilates, and life as arm candy for short-fingered vulgarians masquerading as Presidential candidates. But that story is for another day.

After we finished eating, the young women in the pageant started dropping by to introduce themselves.  This was an important part of the pageant process, unseen by viewers at home. We were to evaluate their poise, appearance, and general social skills. They all acquitted themselves very well, even the shy ones. Their career goals ranged from “I haven’t decided yet” to teacher to pharmacist. Interestingly enough, the young woman whose favorite subjects were math and science did not want to be an astronaut. Astronauts are yesterday’s news.

None of the contestants said anything totally crazy, so they were immediately all more qualified for the position of the Cumberland Ag Expo queen more than Donald Trump would be. 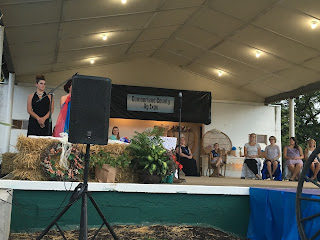 When it was time—ok, past time—for the pageant to start, Angela, the emcee introduced the visiting royalty—2016’s Miss Shippensburg Fair Queen, Miss Shippensburg Sweetheart, and the Cumberland County Dairy Princess. Their role was to sit on stage and add some pageant gravitas to the event. My view of them was blocked by the podium but since I didn’t hear any whoopee cushions going off in mid-pageant, I am assuming they sat there projecting gravitas the entire time.

Then the emcee introduced the contestants—in casual wear. Audry, Abigail, Lydia, Kelly, Rachel, Kayla, Brittany, Courtney and Samantha did a bit of runway walking (fashion runway as in "Work it gurl", not airport runway as in with the flashlights with the orange ends). The older girls gave two to four minute speeches on the topic of “If you were a candidate in the upcoming presidential election, what qualities or initiatives would you take to promote growth in agriculture?”

Yes, that’s the exact question. I brought the script home.

Fortunately, the younger contestants were spared that bit of word salad.

To a girl, the contestants were in favor of agriculture, since that’s food, you know? Even factoring in the ages of the contestants, there was plenty of room for improvement in the speeches. However, only one of the speeches made me consider putting my head in an oven. So, by my math, that’s a victory.

When the speechifying was done, all of the contestants demonstrated their physical fitness and coordination by performing a group line dance. All of them danced better than me. Every. Single. One.

After the dance number, the contestants went backstage to change into evening wear for the next part of the show. I thought about the old Wendy's commercial about the Russian fashion show and chuckled to myself.  ("Is next. Evening wear.....Very nice.")

In the meantime, my fellow judges and I were introduced to the audience. Angela referred to me as a “Renaissance man”. I think most of the audience thought that was something like a Fuller Brush Man, but I did not stand up to explain the difference.

Since the judge introductions didn’t take very long, we quickly moved to the next entr’acte of an auction of the baked goods that had been on display in the exhibits building. A stout and somewhat gruff auctioneer who looked somewhat like an unemployed Humpty Dumpty sat on the lip of the stage and auctioned off plates of cookies and brownies, not to mention pies and cakes and the occasional plate of muffins. Each item had a slice out of it, since tasting is an essential part judging a baked goods competition.

Potential customers crowded around the inventory so they wouldn’t miss prize winning pan of apple pandowdy—with one slice gone, of course. A couple of things (“I think it’s mincemeat”) went for a buck or two, but the high demand items were in the twenty dollar range. Emcee Angela showed her colors as a Pennsylvanian by shelling out for a wet bottom shoo fly pie. 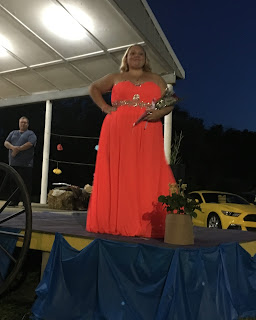 By the end of the auction, the contestants had time to put on their faces and whatnot and so were ready for Act 2 of the pageant to start. The girls also had more than enough time to get into an Alexis and Krystle style catfight backstage, but apparently chose not to follow that path. 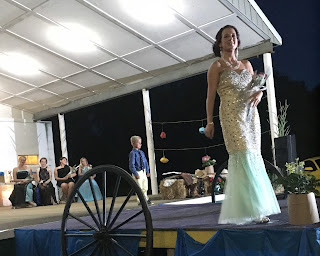 In the evening wear section of the contest, Angela read a short bio of the contestant as she was escorted to the center of the stage by a gentleman—anyone from a six year old kid in his Sunday best to man in his U.S. Army dress uniform. While the biographies obviously emphasize the high points—prized rabbits, good works, church membership, and career plans, they didn’t gloss over the challenges the kids had met. These included bullying, autism, single parent households, and so on.  In a matter of a few moments, I went from thinking “Where did she get that gown, Bass Pro Shops?” to thinking “You go, girl!" 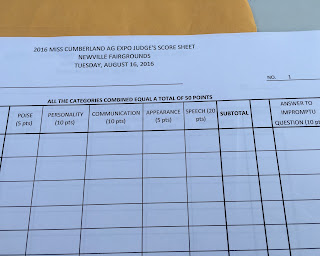 After the evening gown section, my fellow judges and I completed our score sheets and agreed which three girls would move on as finalists. While it wasn’t an easy decision, we all arrived at the same one independently. The finalists then had to answer an “impromptu question”, which wasn’t really that impromptu since it was right there on the program.

One of the girls got an unexpected snort out of me when she answered the question, “Would you rather live in the past, present, or future?”. She was in favor of living in all three time periods. She noted that one of the interesting things about the past would be black and white television. Oh my. Well, at least she didn’t mention the possibility of dating Elvis.

At this point there were a few claps of thunder and Angela moved to speed the pageant along since the judges and most of the audience were sitting under the stars. Pam and Rosalie and I completed our score sheets, and agreed again that we were all on the same page. Pam completed the prize envelopes—which meant that the emcee could not possibly announce the wrong name-—while the outgoing queen gave a speech, complete with tears that made me glad that the end of her reign was near.

As the winners were announced, they were crowned with tiaras, each one a bit larger than the last. The largest tiara went to the 2016 Cumberland Ag Expo Queen, Brittany Graham. 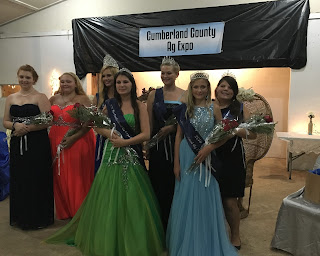 Soon enough the stage was filled with photographers, families, and friends as they congratulated the winners and consoled those who didn’t get a tiara. After a few pictures, Pam and I decided to head out before it started raining. It was a fun evening—I only wish I’d bought an apple pandowdy to enjoy on the ride home.
Posted by Rick Bryant at 8:41 PM