Planes, No Trains, and Automobiles 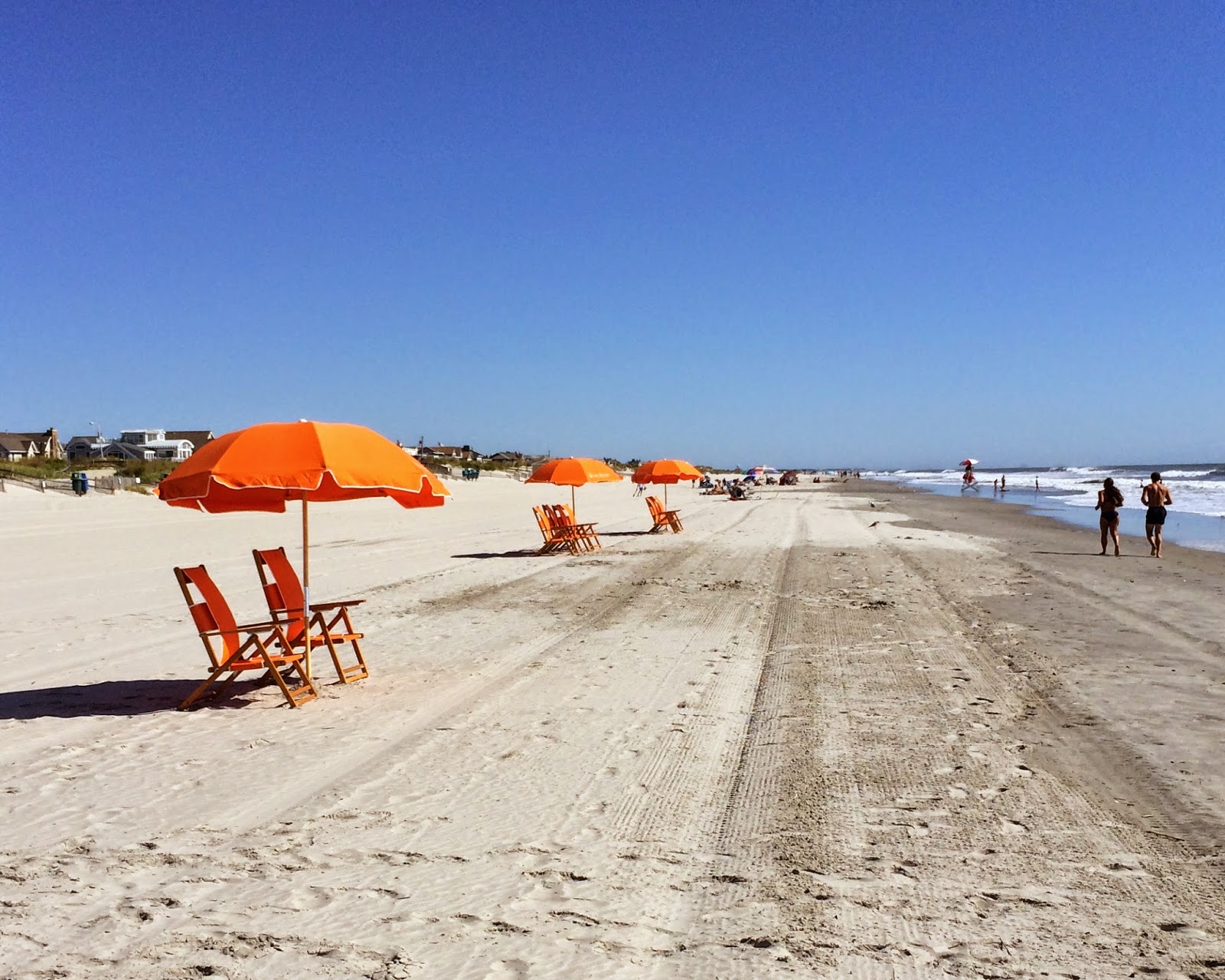 At the end of August, I went to the shore for a few days of not doing much of anything. I’m not really good at not doing much of anything. In fact, if we had played Not Doing Much of Anything in high school gym class, I would have been picked last. Accordingly, after about 15 minutes of not doing much of anything, I resolved to do something—even just once thing—every day. Early on, I scratched training for a marathon and writing The Great American Novel off the might-do list. I needed something to do, but I didn't need that much to do! I rode my bike around the island (14 miles), walked to Stone Harbor Point and back (5.62 miles), and cleaned the garage. Not much, but it felt as if I'd done something. 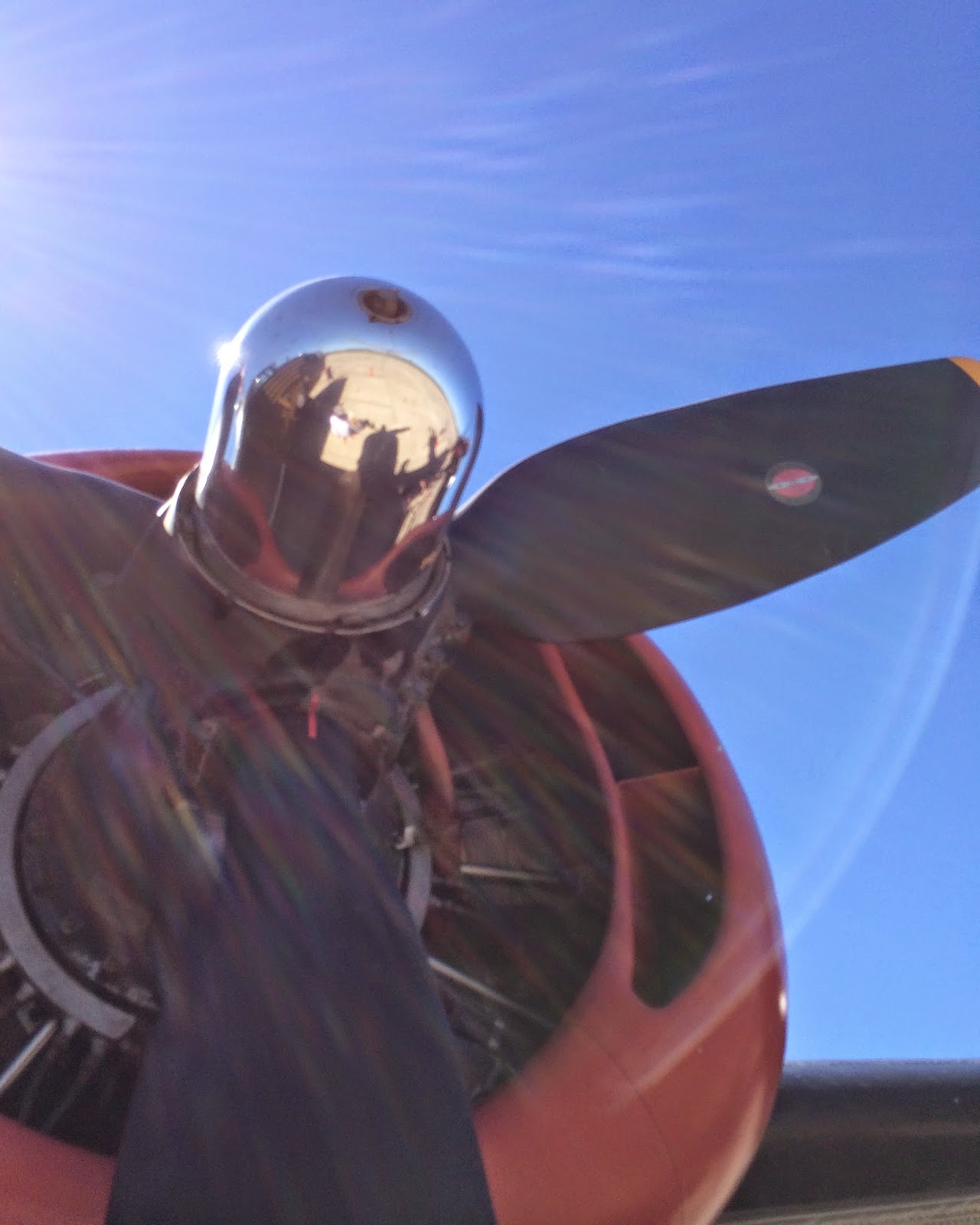 One of days when I was doing my 5.62 miles along the beach, I saw a B-24—yes, the WWII vintage bomber—fly overhead. That’s not something you see every day. So I called my brother Rob who knows about these things and he told me that it had to be from the Commemorative Air Force and I should look at its web site to find out what the deal was. A quick trip to the interwebs told me that the B-24 was spending a few days at the Cape May County Airport, otherwise known as the former Wildwood Naval Air station. I decided to head over there that very afternoon. 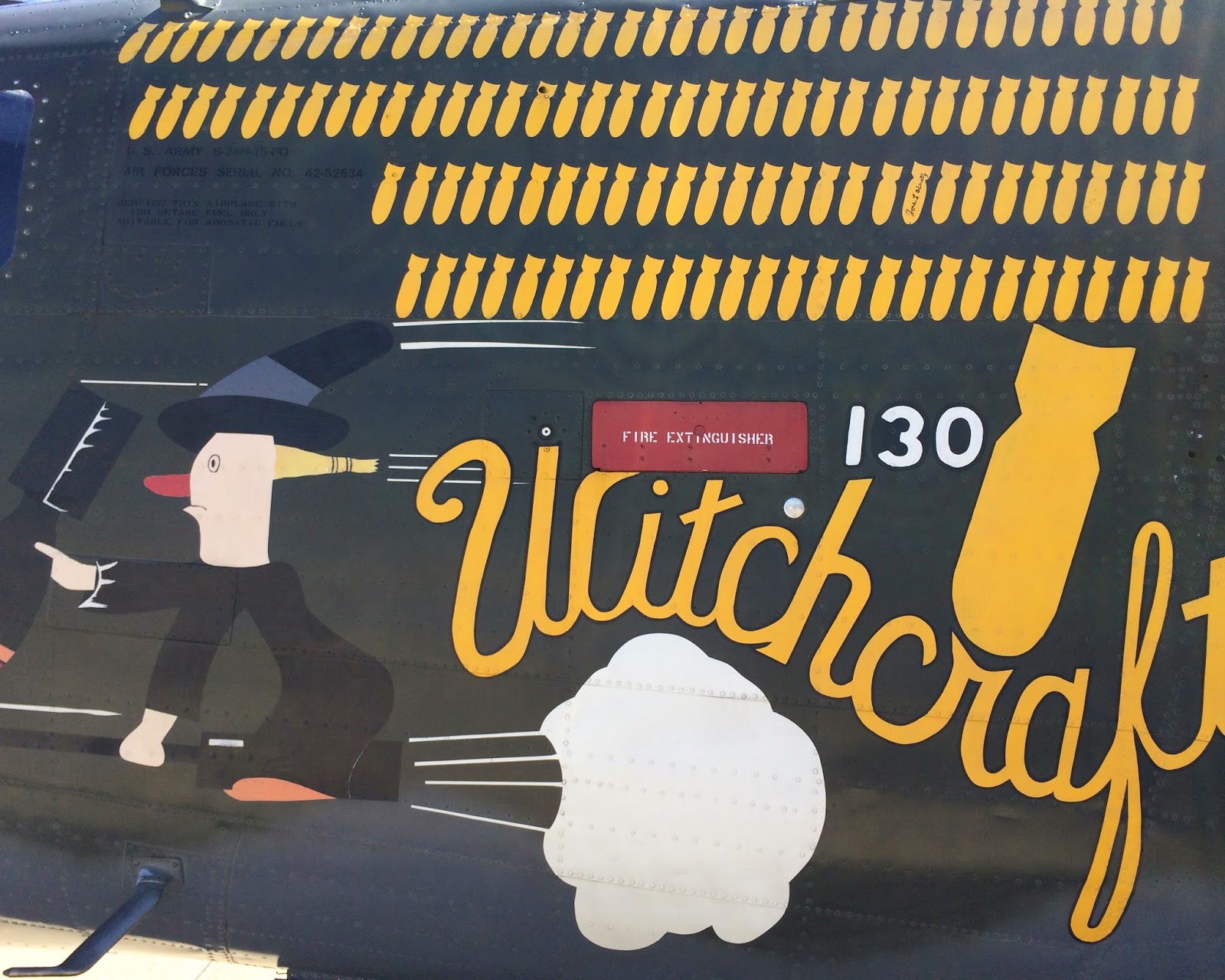 I’d never seen a B-24 in person, but I remembered that one of my father’s competitors in the insurance business flew a B-24. My father, the self-described world’s best pilot, could get under this man’s skin instantly at social functions by referring to him as an airplane driver, rather than as a pilot. This is something my father, the former fighter jock, particularly enjoyed. He was a better pilot, better looking, got laid more, could hold more liquor, and do a better job solving the NYT Crossword in pen (at least after he met my mother), than any old airplane driver and he made sure that the airplane driver knew it. 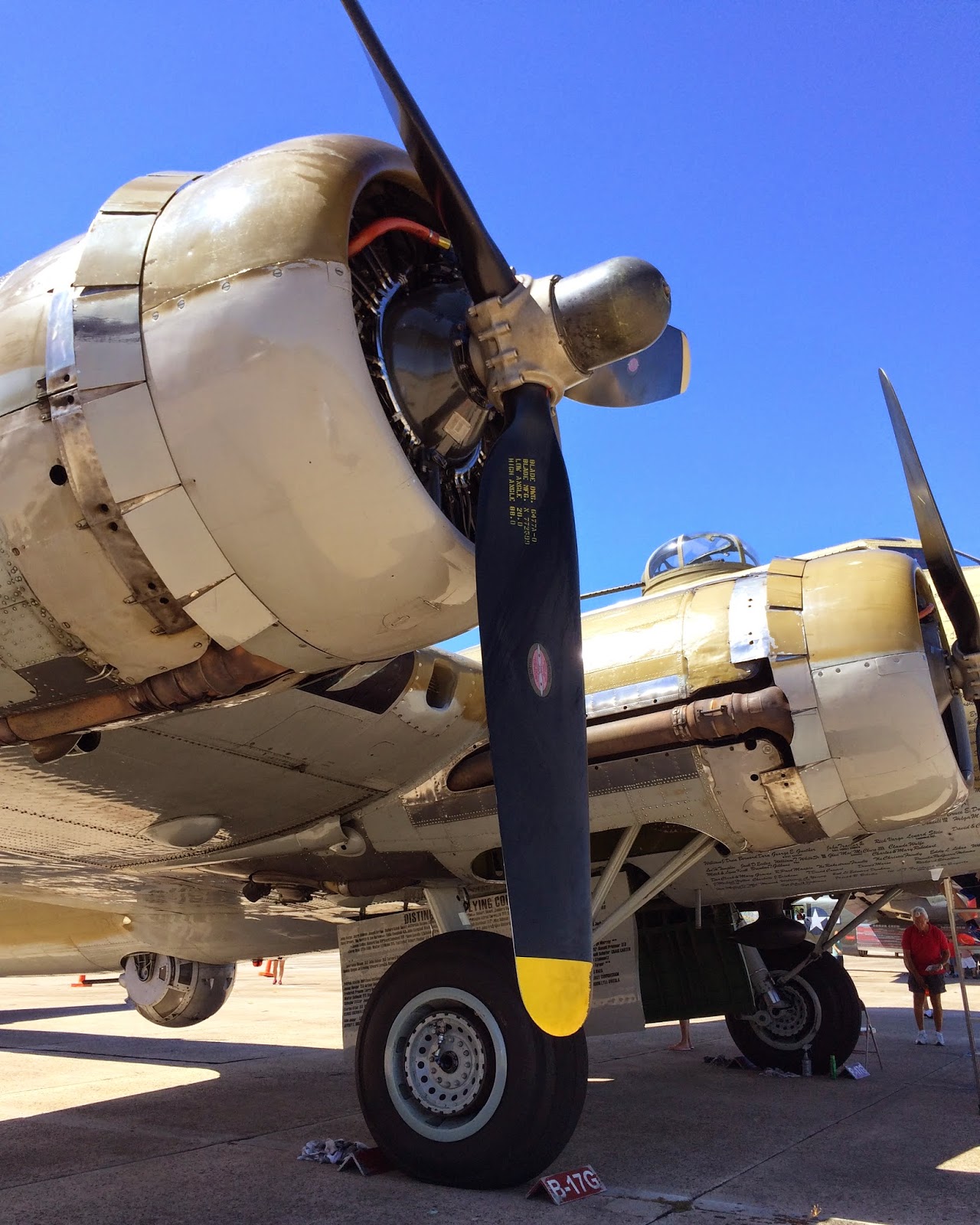 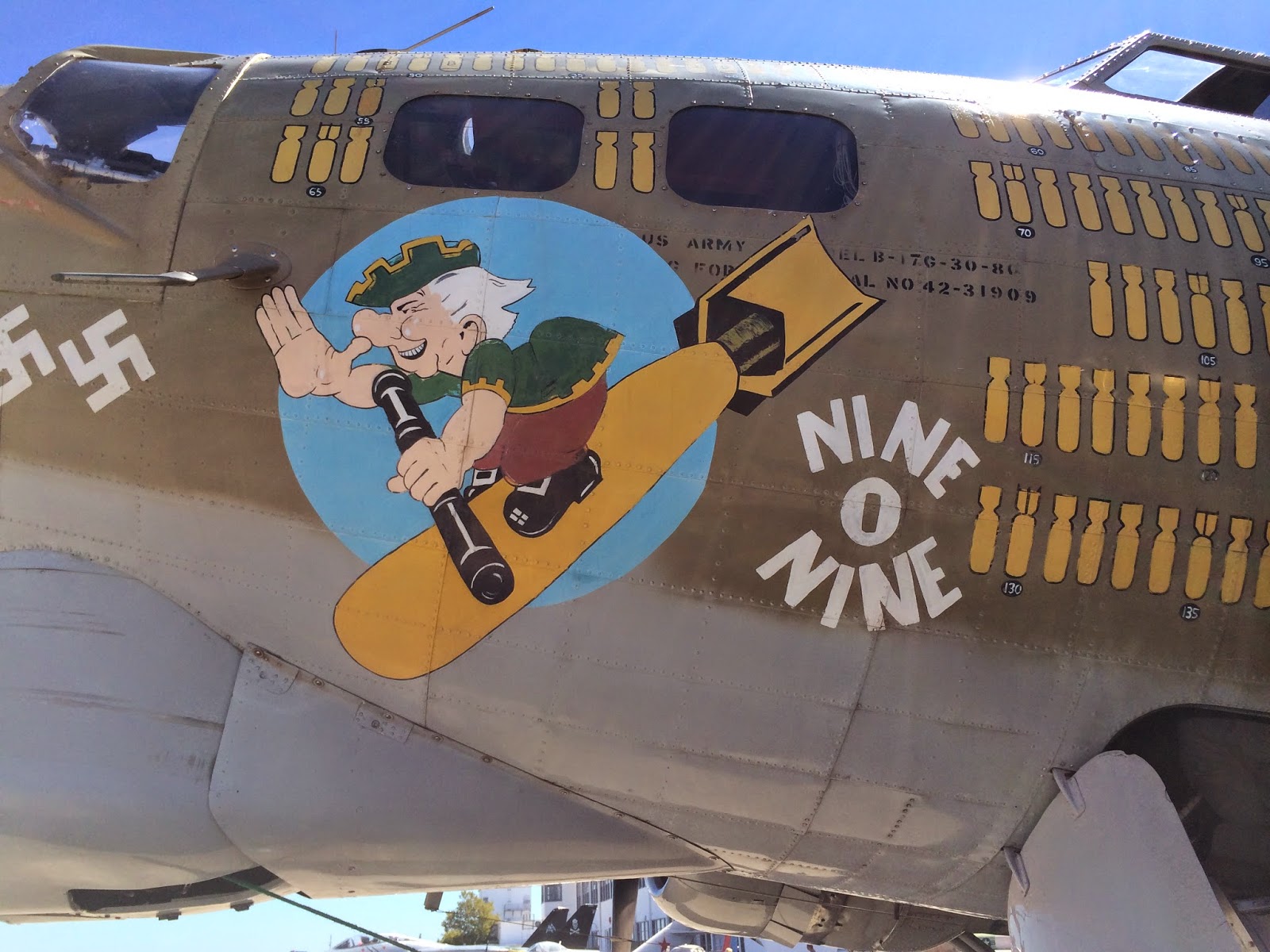 I’d been to the Cape May County Airport once before and thought it was a sad sort of place that must have about 23 customers per year. On this visit, however, it was packed. I practically had to park in Delaware and then I had to wait in line to pay my $10 admission fee. They were having some sort of expo to cash in on the visit of the vintage planes. In addition to checking out the exhibits, you could sample beer or buy some sort of contraption to keep the flotsam and jetsam out of your gutters and downspouts..

The B-24 and its cousin, a B-17, were parked on the tarmac outside the hanger that houses the Naval Air Station Wildwood Museum. The bombers’ friend, a P-51 Mustang, was also part of the exhibition, but it was undergoing some “procedure” so it wasn’t available for my viewing pleasure. You could ride in all the planes, too. That, however, was not for the faint of wallet. The fare was $450 for a thirty minute ride on the B-17 or B-24 and $3,200 in the P-51. Yeah, I passed. But I did think about it.

I took the self-guided tour of both the B-17 and B-24, the pride of our military industrial complex circa 1944. They seemed as if they’d be scary as hell to fly in, let alone with people shooting at you while you bombed Germany. Seeing the planes and hearing about the conditions in which men served on them really does fill you with awe for the accomplishments of the guys of the greatest generation.

After I toured the planes I walked through the exhibits again. The museum has a nice enough collection mixed in with a bunch of cheesy stuff, especially the mannequins depicting wounded soldiers. Even with a huge crowd—which there was—the place look as if you could drop a few million bucks into it before anyone even noticed. Still, it was nice to see people soaking up some American history for a change.

I thought the vintage planes were about as vintage as Cape May County events got until I checked out Twitter on my iPhone on October 3 and saw that there was a vintage auto car show and race in Wildwood. My friends Bruce and Martha the phone Luddites--as in flip phones with broken screens—give me a hard time about my close relationship with my iPhone, but had it not been for my iPhone and Twitter account, we’d have never found this this thing. Thank you Cape May County Herald for posting something about it! 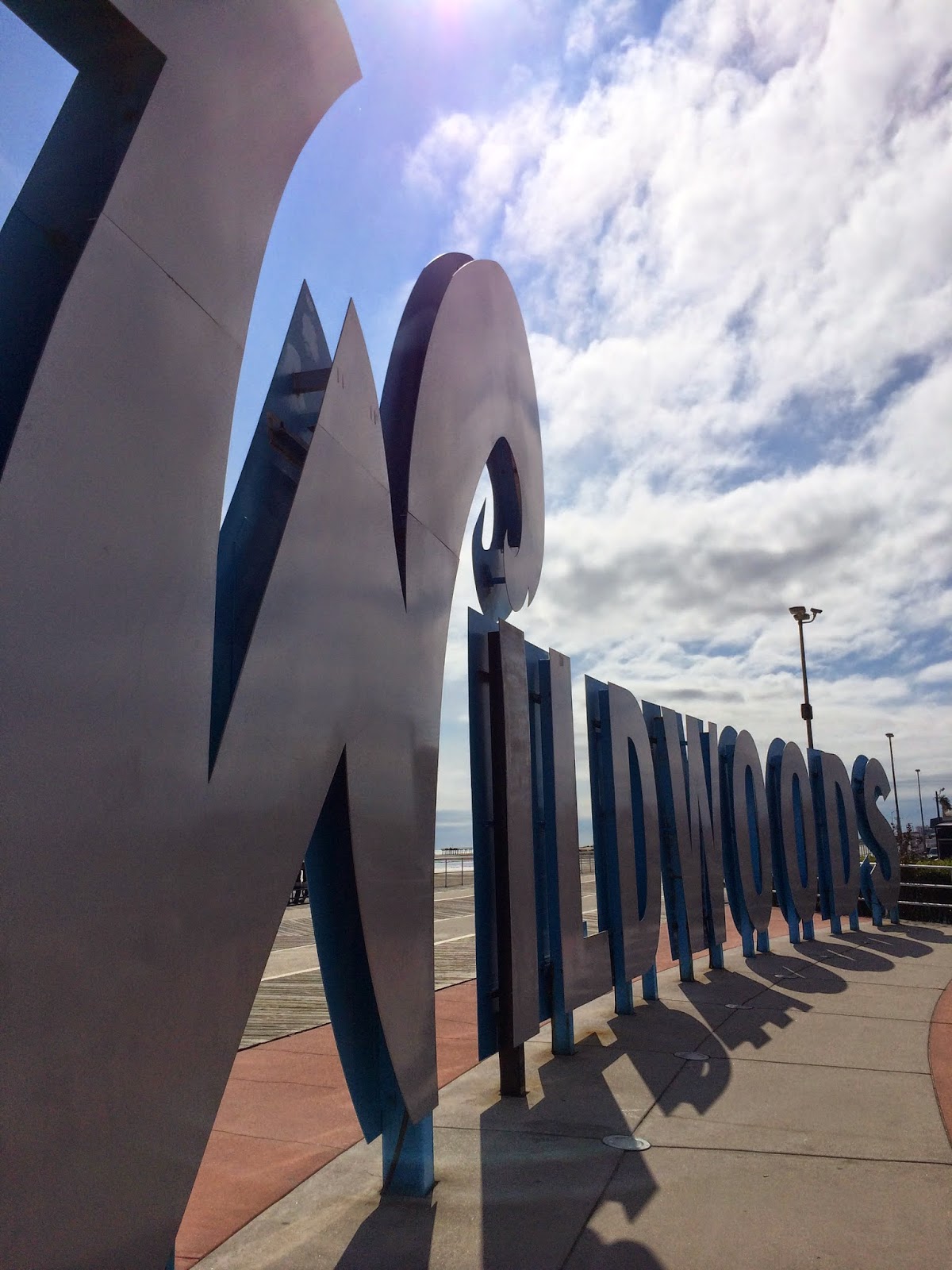 The Wildwoods (as in North Wildwood, Wildwood, West Wildwood and Wildwood Crest) are just across Hereford Inlet from Stone Harbor but they might as well be a million miles away. My grandparents started going to the Jersey shore in the 1930s and my mother told me even then Wildwood was “pretty rough”. If your favorite dying northeastern city had a few miles of nice beach next to its downtown, that would be Wildwood.

The city has started a heroic job of rebranding itself with its 1950s doo-wop era architecture but the place has large sections of town where no one has put the bop in the bop shoo bop. 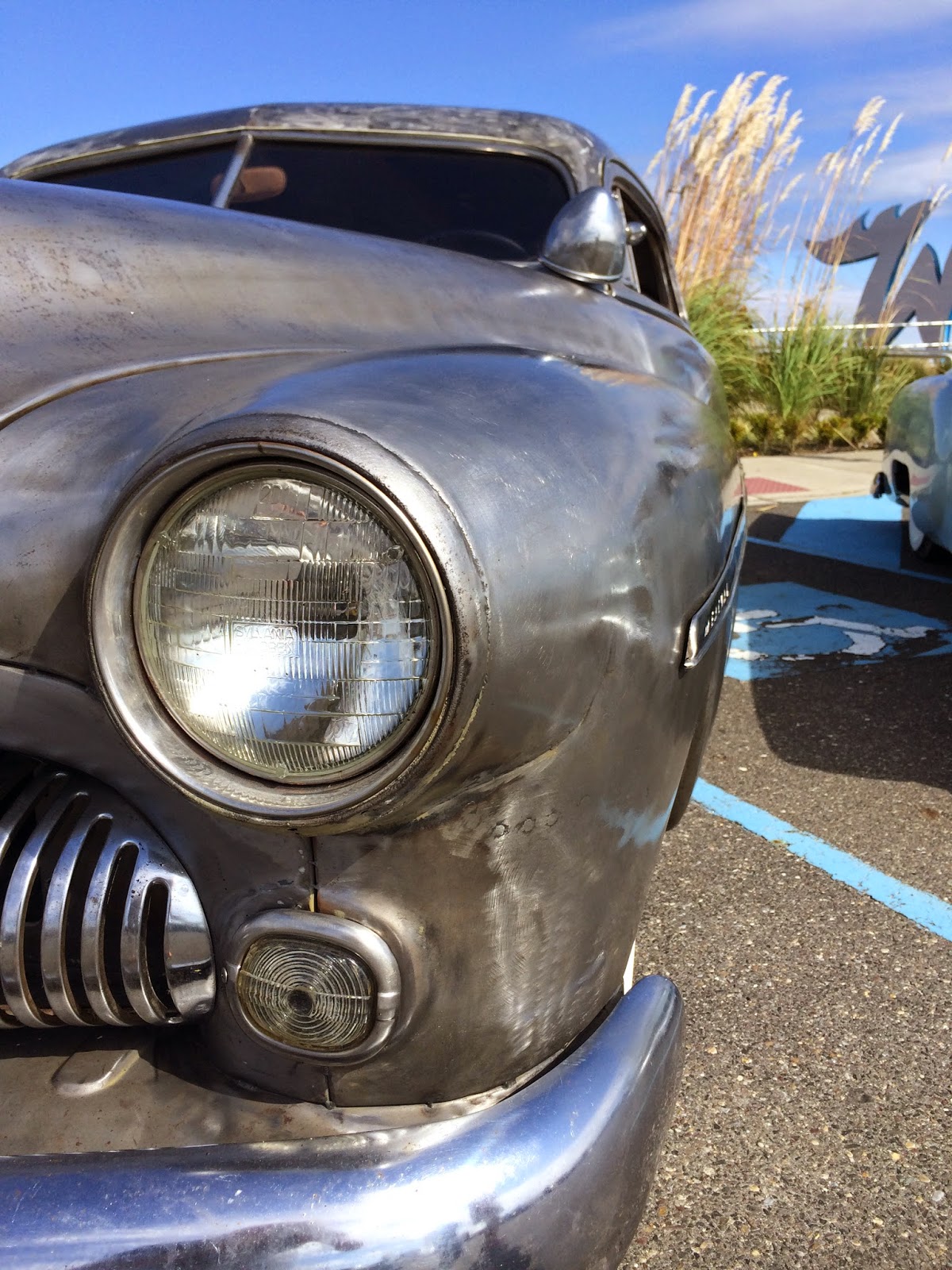 The car show was in the parking area next to the Wildwood Convention Center. Most of the cars were from the 1950s and early 1960s—usually tricked out in some way. There were lots of low riders.

It was all pretty informal—the cars didn’t even have signs in the windows to identify them. I had to ask someone sitting at a table selling t-shirts where the car races on the beach were. He said they were about 10 blocks up the Boardwalk and that I should just look for the large Ferris Wheel. 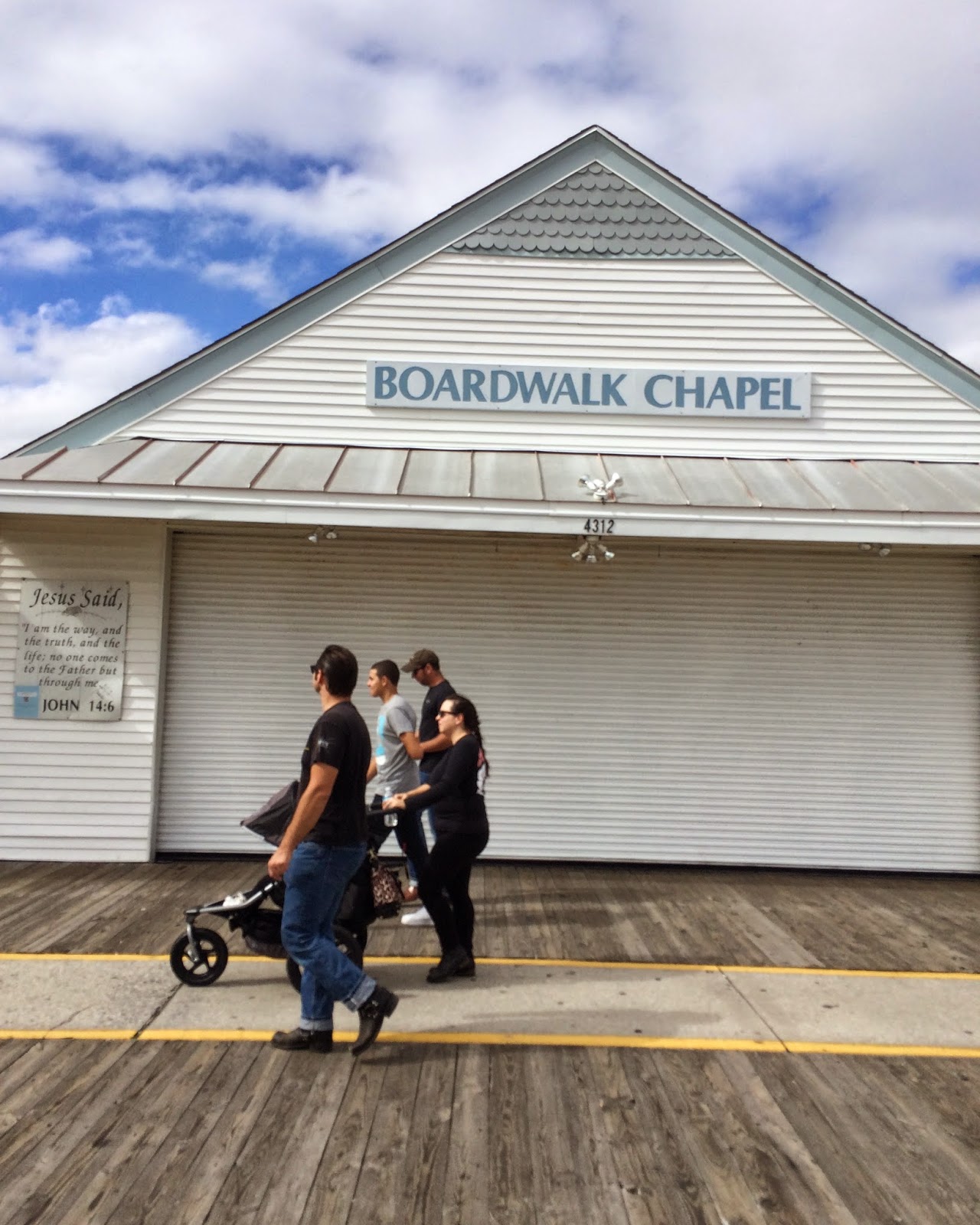 The Boardwalk is well, something you just have to see to believe. It hasn’t changed very much since my last visit, longer ago than I care to remember. It’s sort of like the midway at a low end county fair, except instead of smelling of cotton candy and farm smells, it smells of cotton candy and ocean smells, in addition to cigars, someone who used too much Axe body spray, and someone who didn’t use enough Axe body spray. As my college friend Peggy would say, it’s quite something.

There are lots of shops selling things that make you scratch your head and say to yourself “Who buys this stuff?” 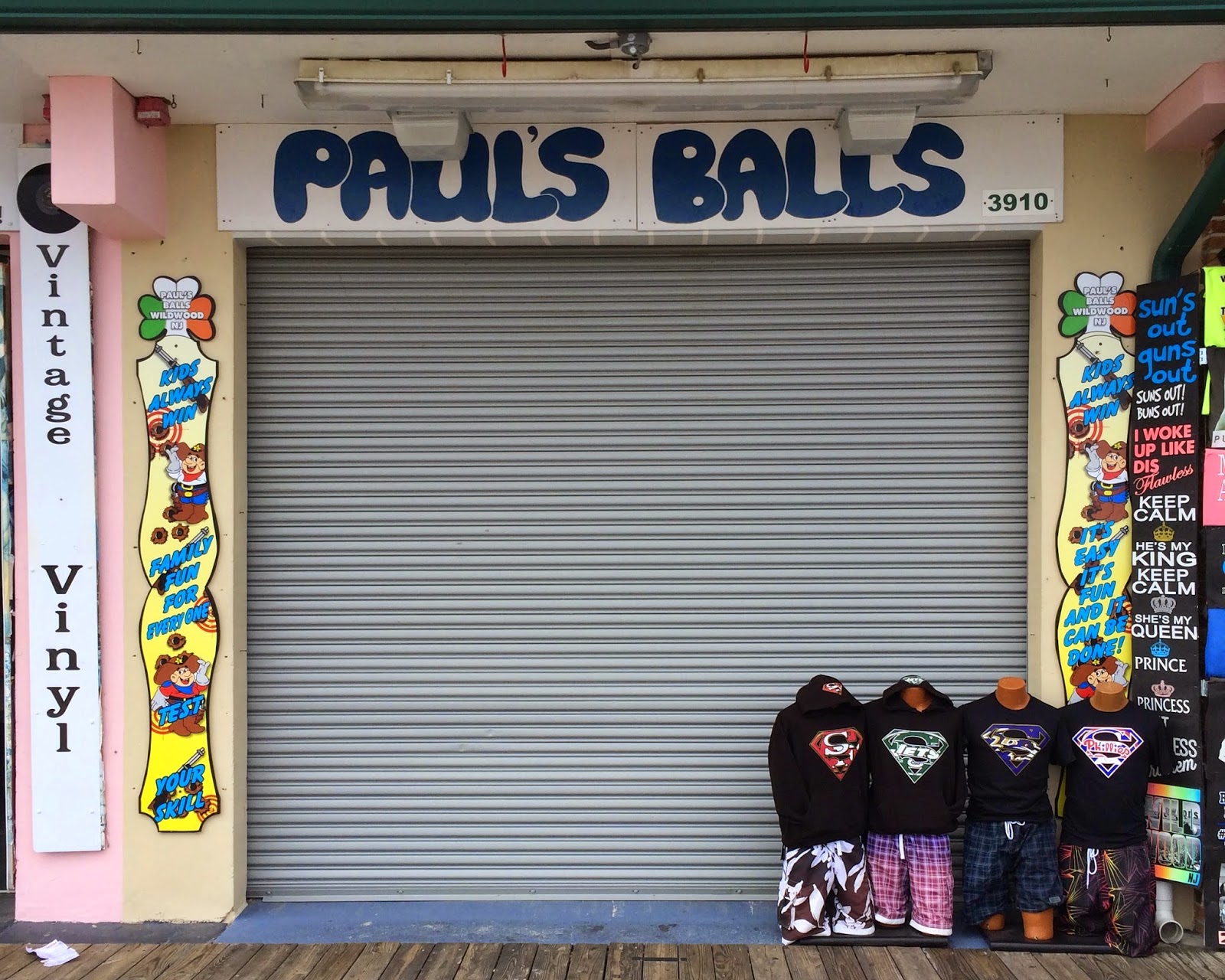 In October some places are closed. I couldn’t check out Paul’s Balls. 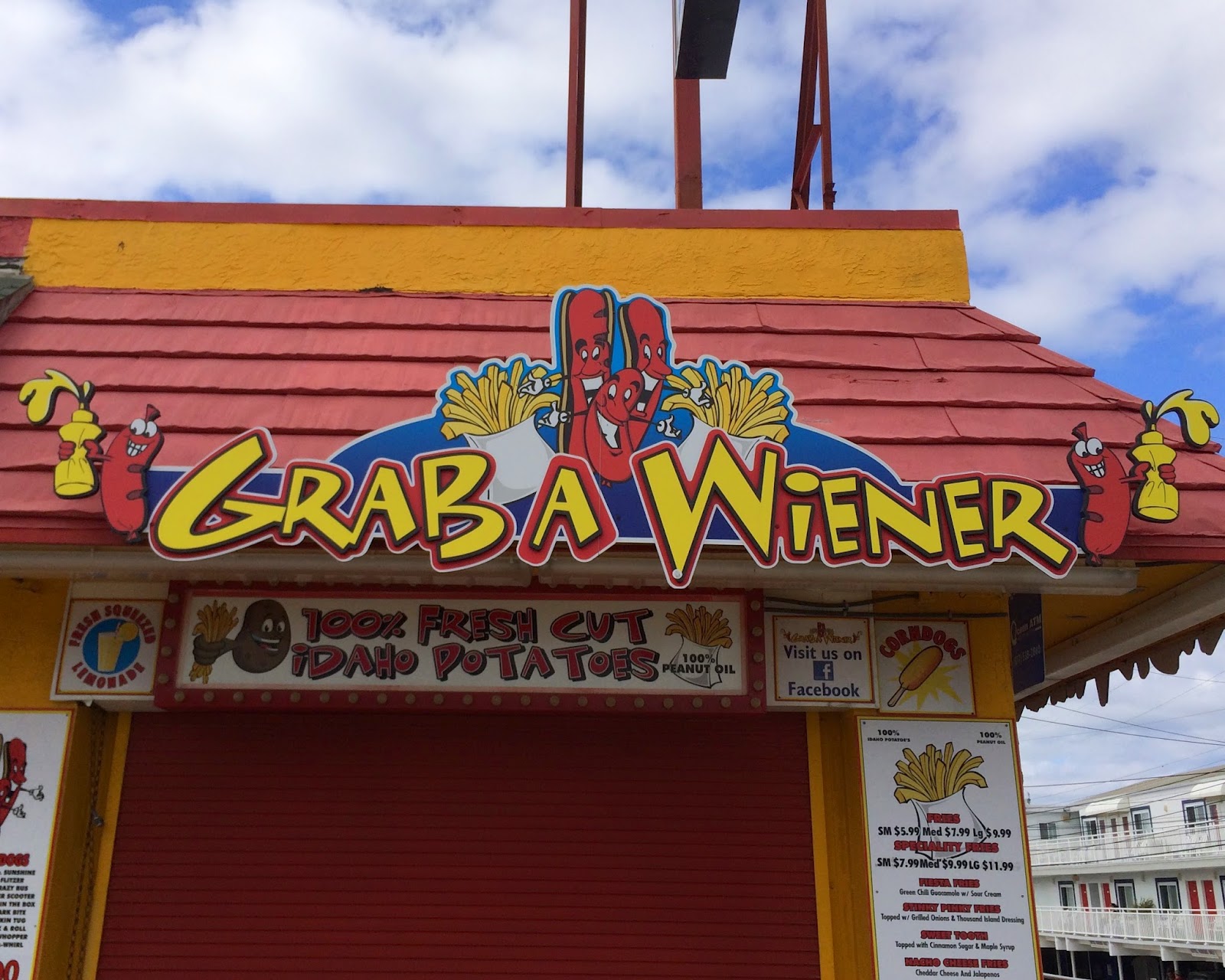 Grabbing a wiener wasn't an option either. Yep, it's right there by Paul's Balls. I think both Paul's Balls and Grab a Wiener would do really well in Rehoboth Beach. 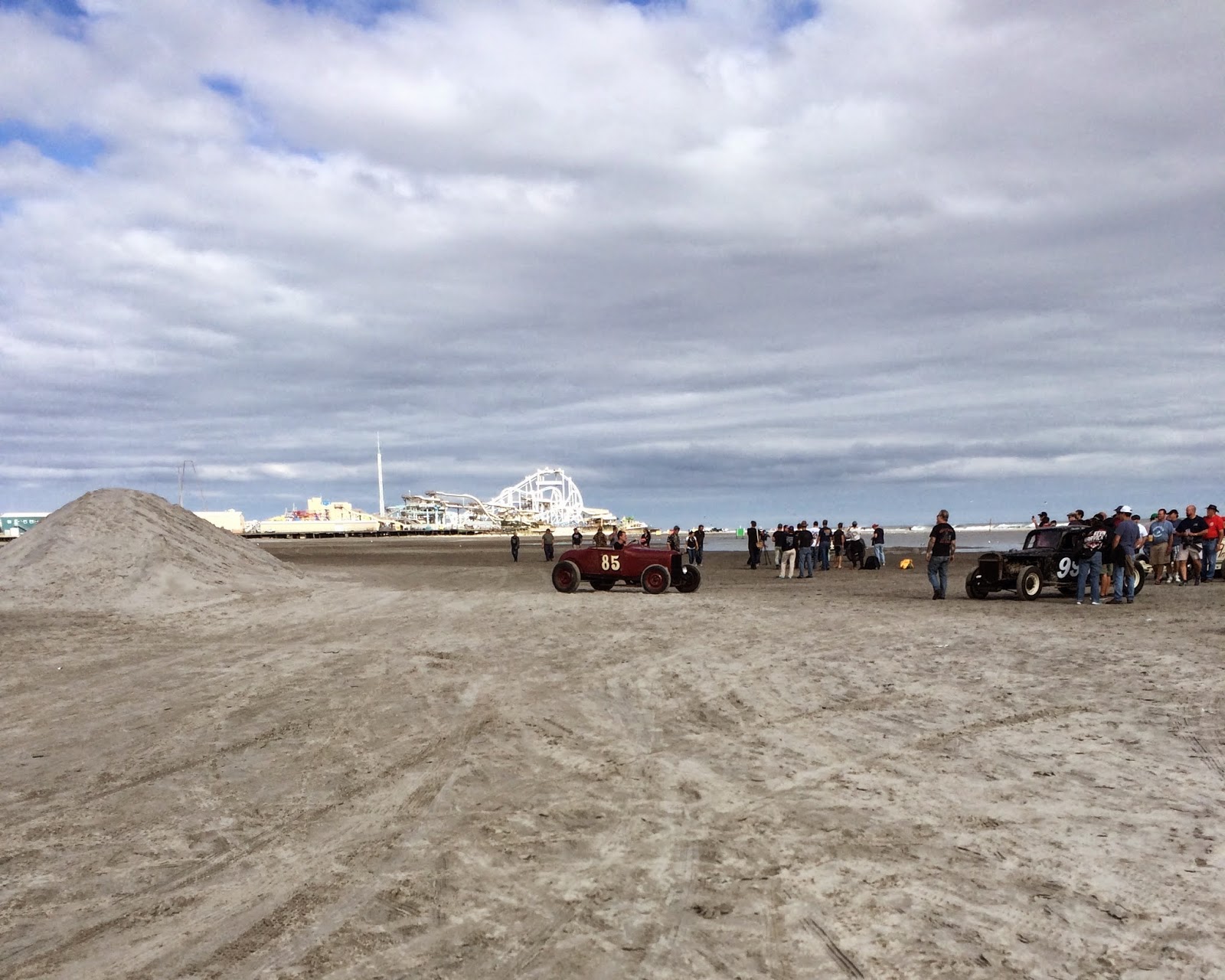 After our ten block walk, we were near the large Ferris Wheel and could see the tents that presumably marked the race course out on the beach. For whatever reason, Wildwood is one of the rare places on the shore where Mother Nature deposits sand rather than taking it away, so it's quite a walk from The Boardwalk to the beach. 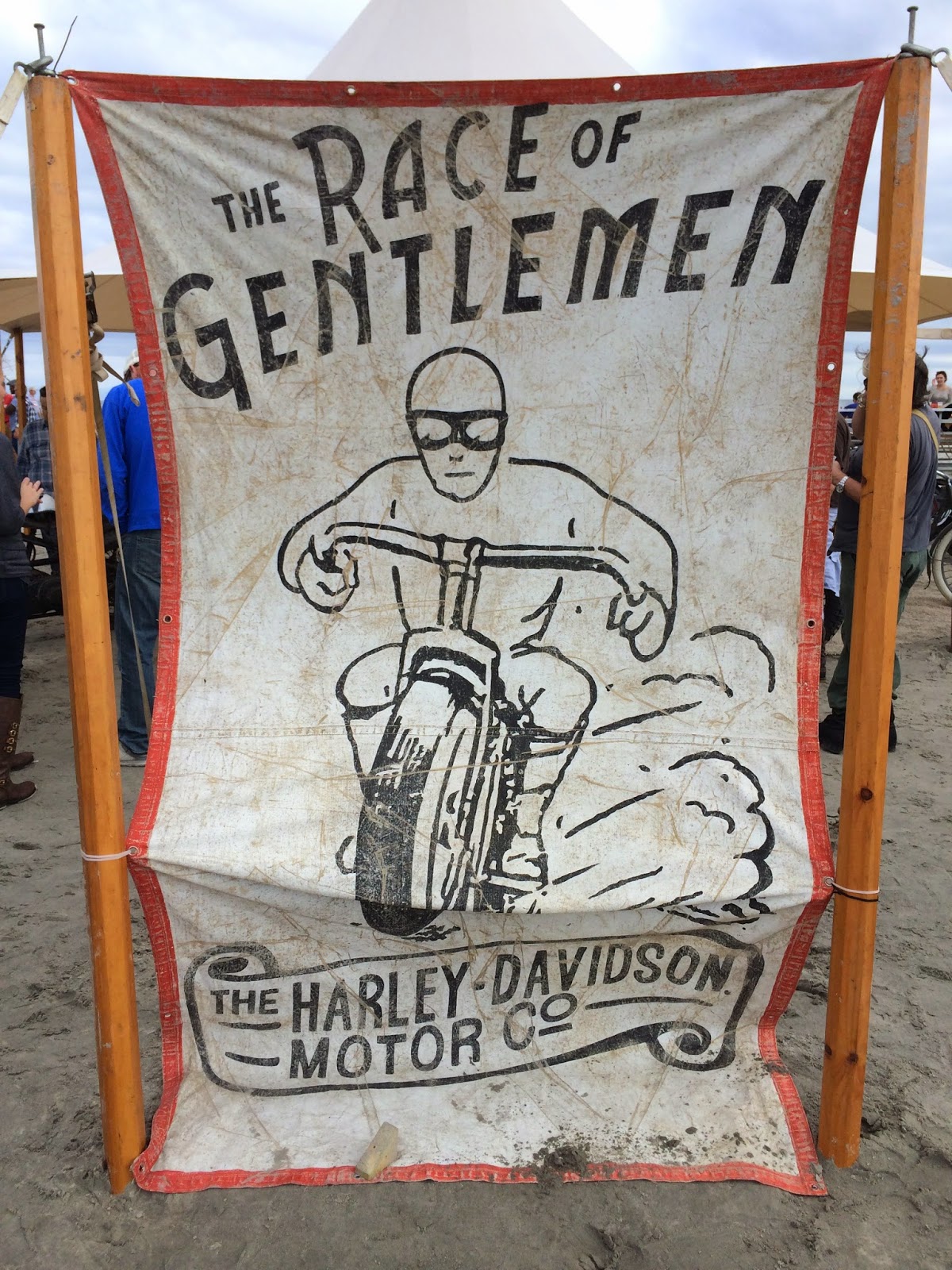 The tents marked the site of the weekend’s main event, something called The Race of Gentlemen. Yes, it sounds as if it should have been sponsored by Ralph Lauren or perhaps Vineyard Vines. Elaborate tailgate parties spilling from vintage woodies, women in pink and green, men in rowing blazers, top shelf liquor, that sort of thing. WRONG. 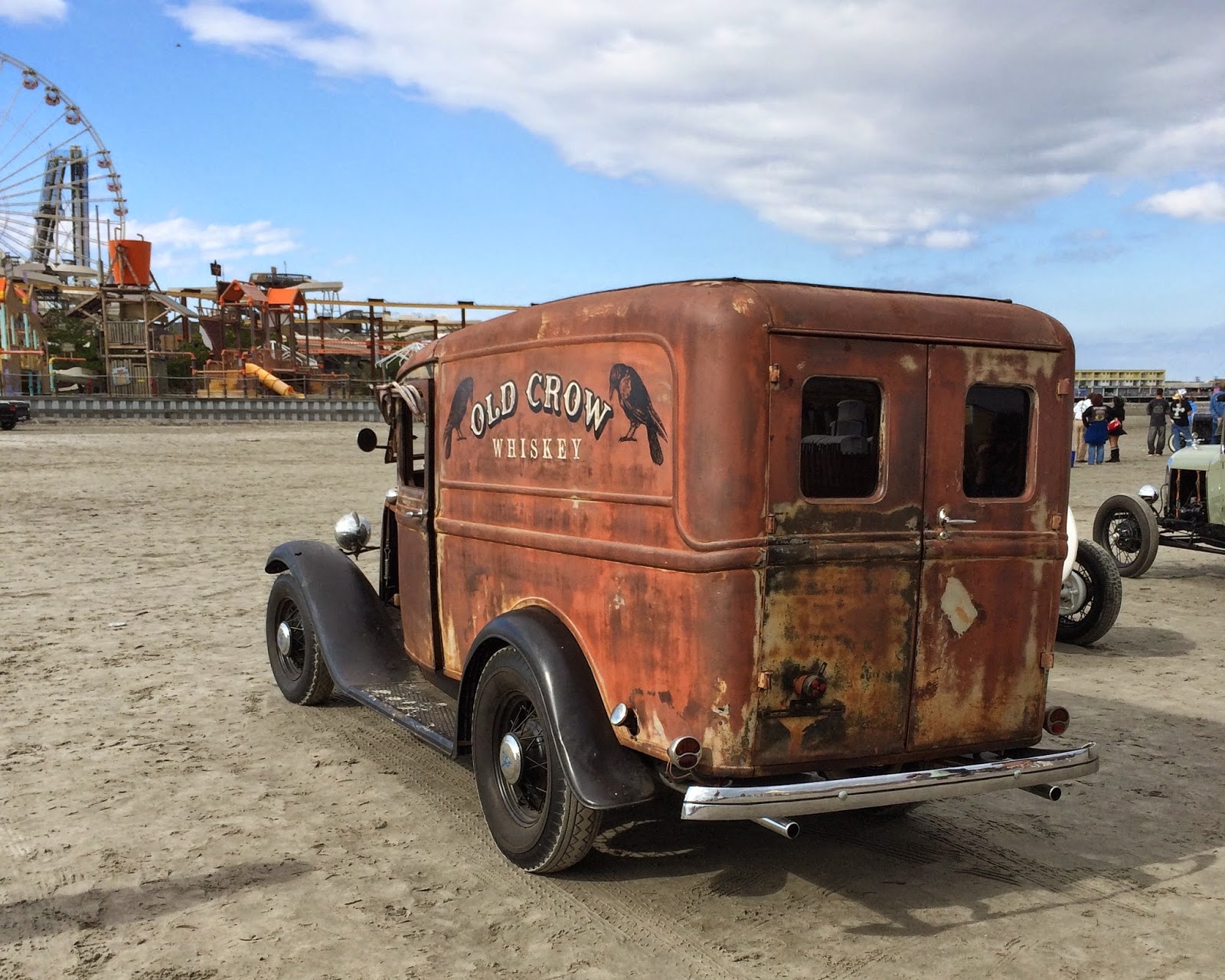 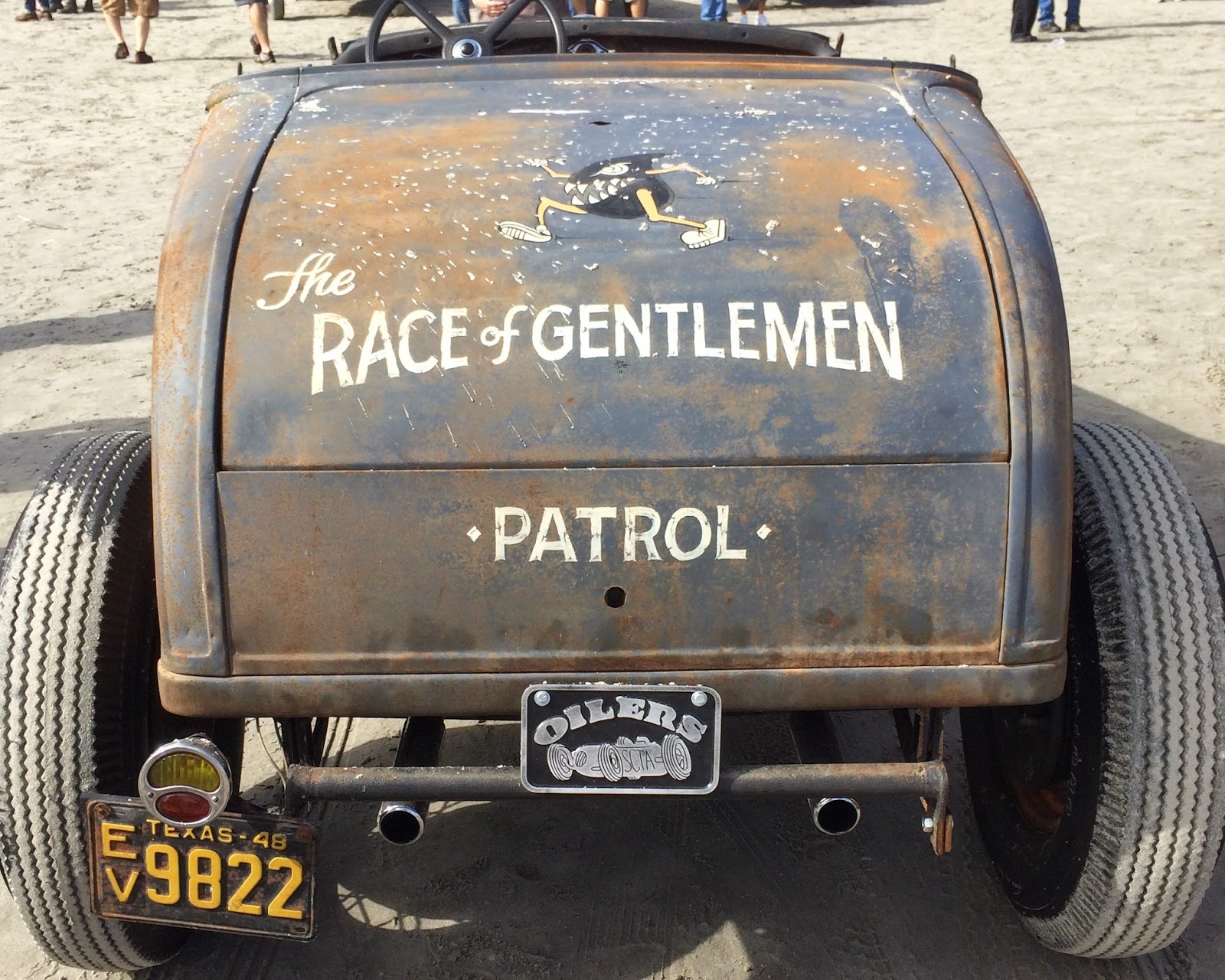 The event turned out to be unlike any car gathering I’ve been to, and as someone who comes from a family of motor heads I’ve been to my share. It was a gathering of hipsters with old cars and motorcycles. Come to think of it, I think the only way to get a hipster to the beach would be to lure him with an old car or motorcycle.

I think the event was sponsored by Harley Davidson and perhaps—I wasn’t quite sure—Old Crow Whiskey. You could have told me that it was sponsored by Zap Comix and I’d have believed it. There wasn’t much info about it online, so I really didn’t know what to expect. 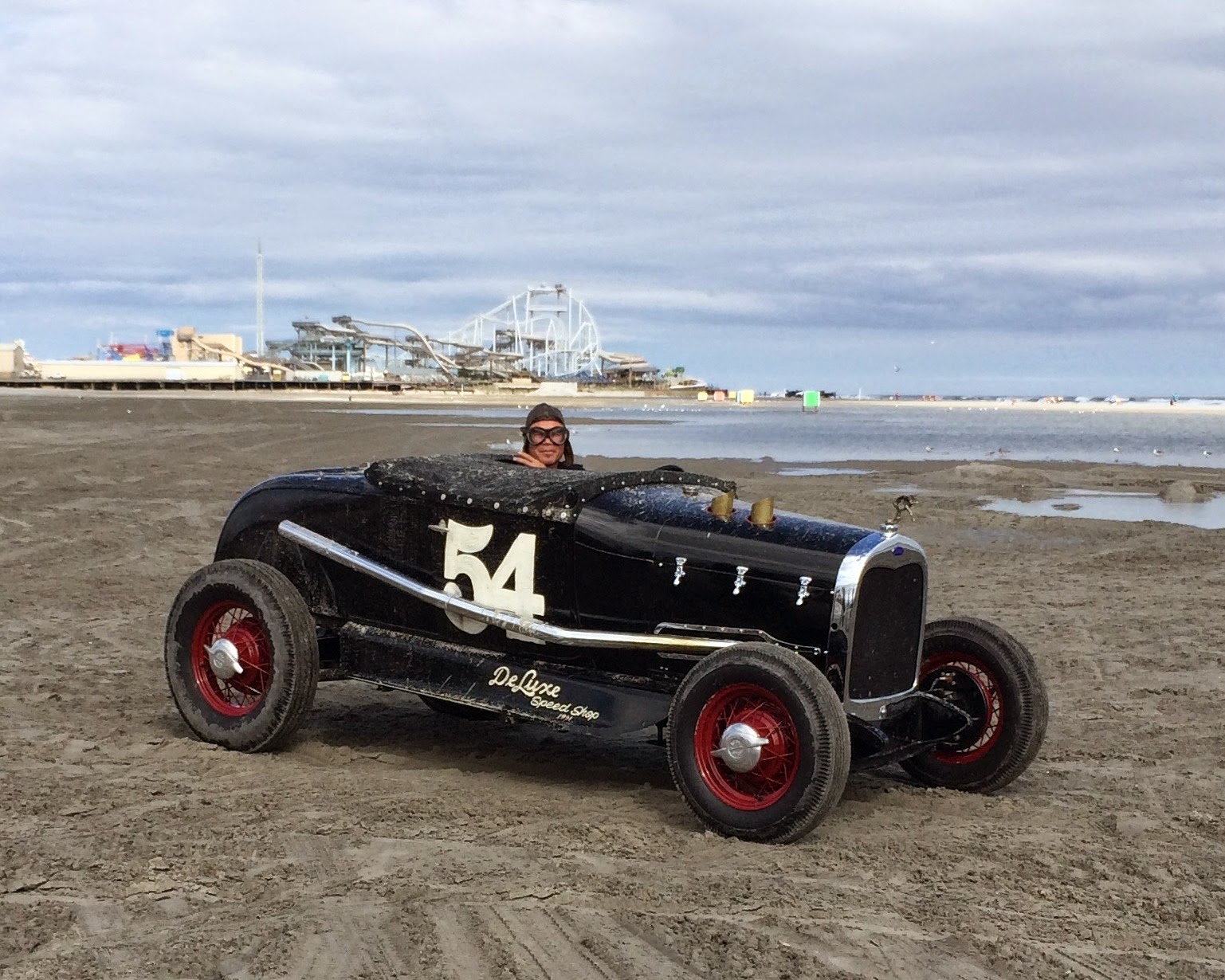 I couldn’t believe that they’d really race cars on the beach. Who did they think they were, Barney Oldfield? 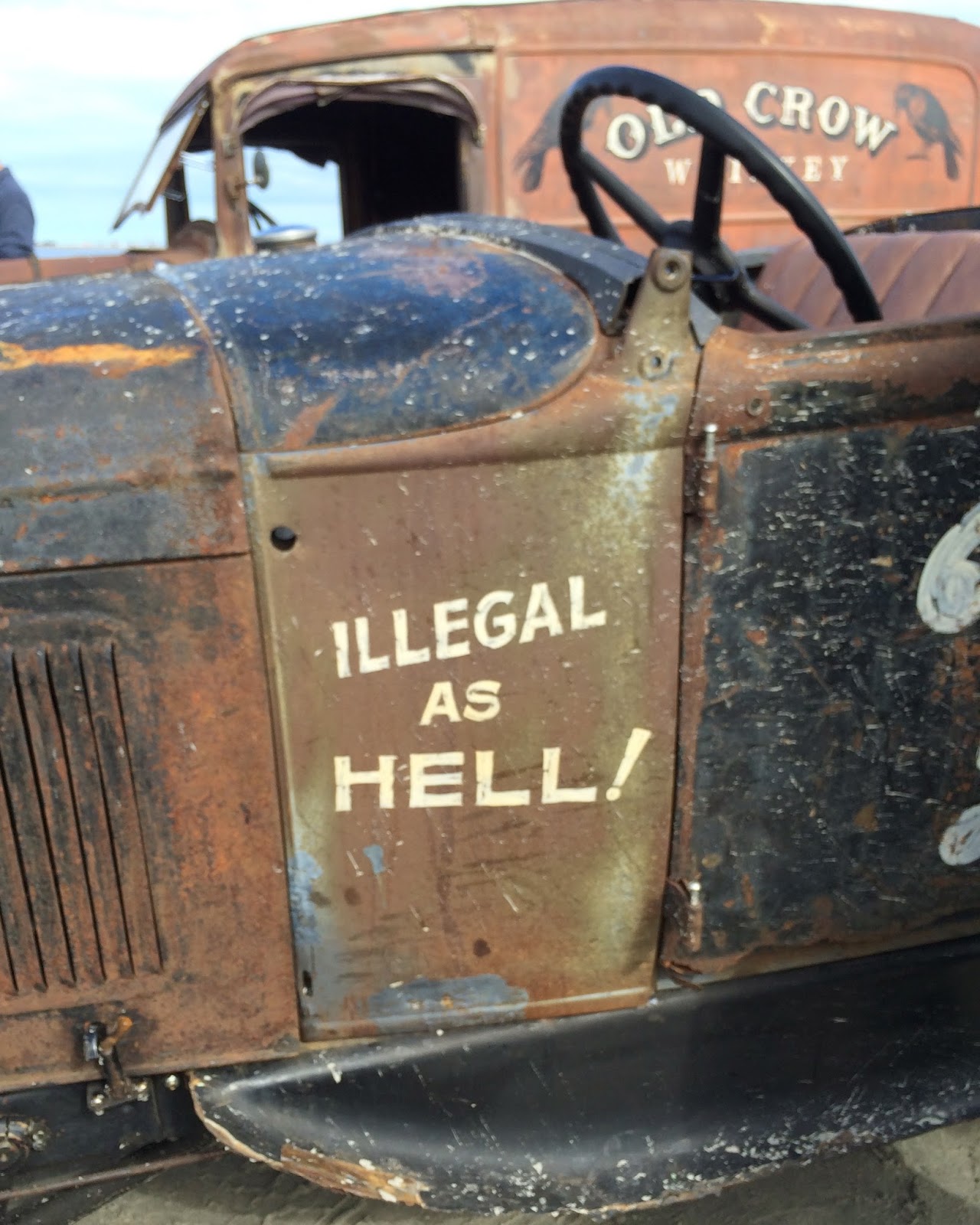 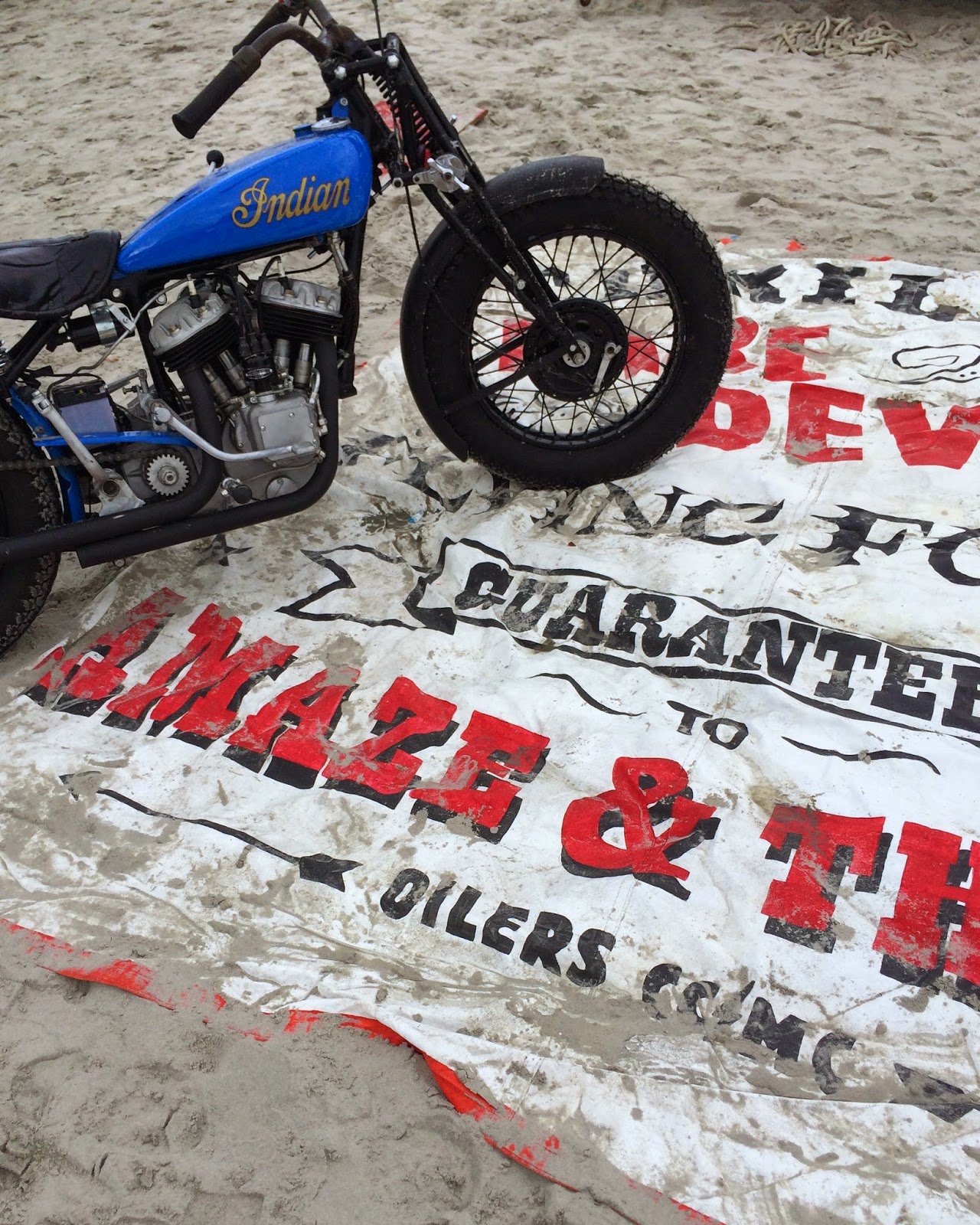 None of the cars were newer than 1930-ish. A long time had passed since anyone had described any of them as "cherry". The motorcycles were of the same vintage and condition. 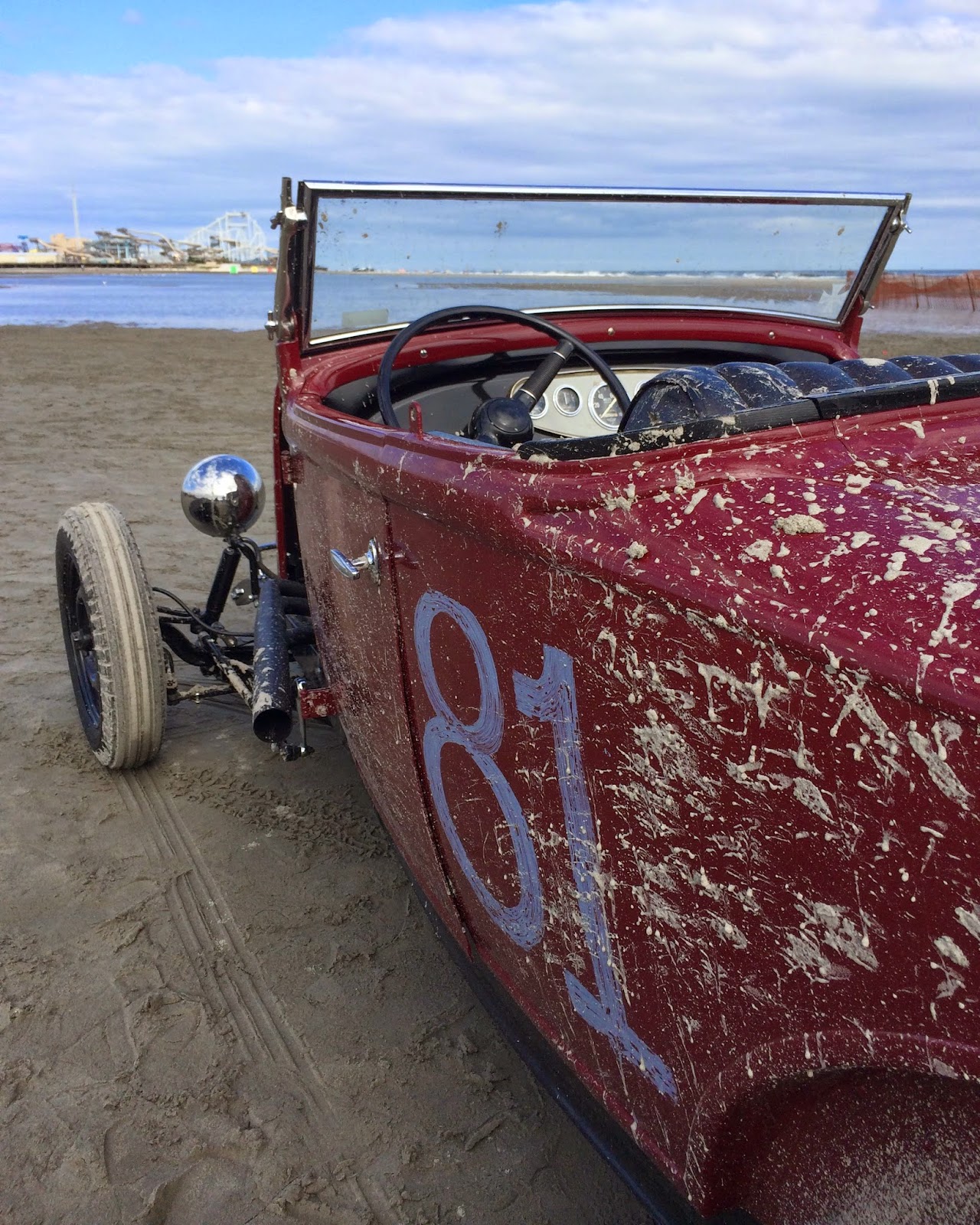 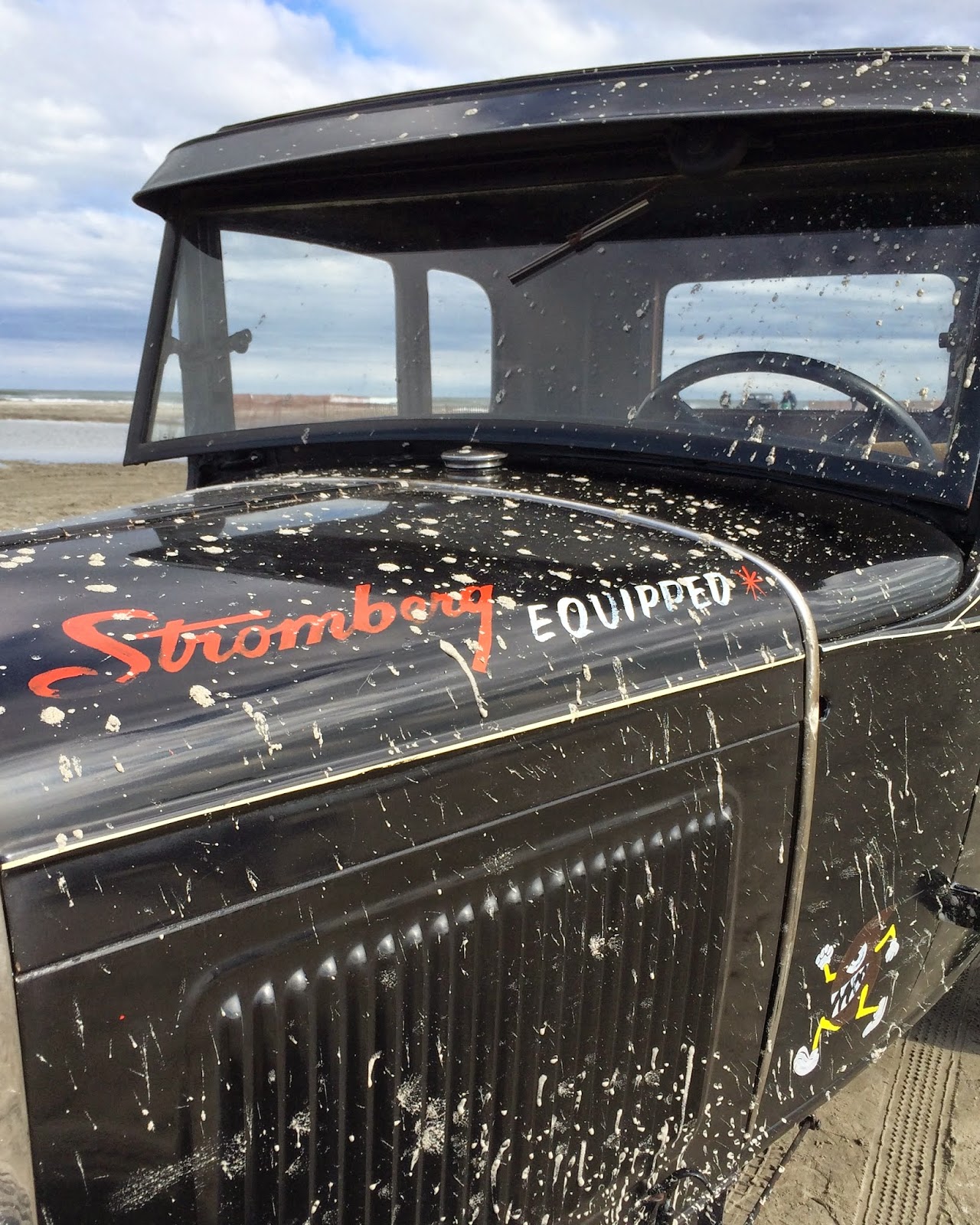 No one seemed concerned about the effects of salt water or even sand on their machines. According to the event’s web site, admission was supposed to be $30, but it looked as if the person selling tickets had said "Screw it!" some time ago so we walked in for free. I even walked around looking for someone to pay since the experience was certainly worth the thirty bucks.

There were half sheet pans under cars and motorcycles everywhere. Apparently the racing gentlemen were concerned about keeping dripping engine fluids off the beach. 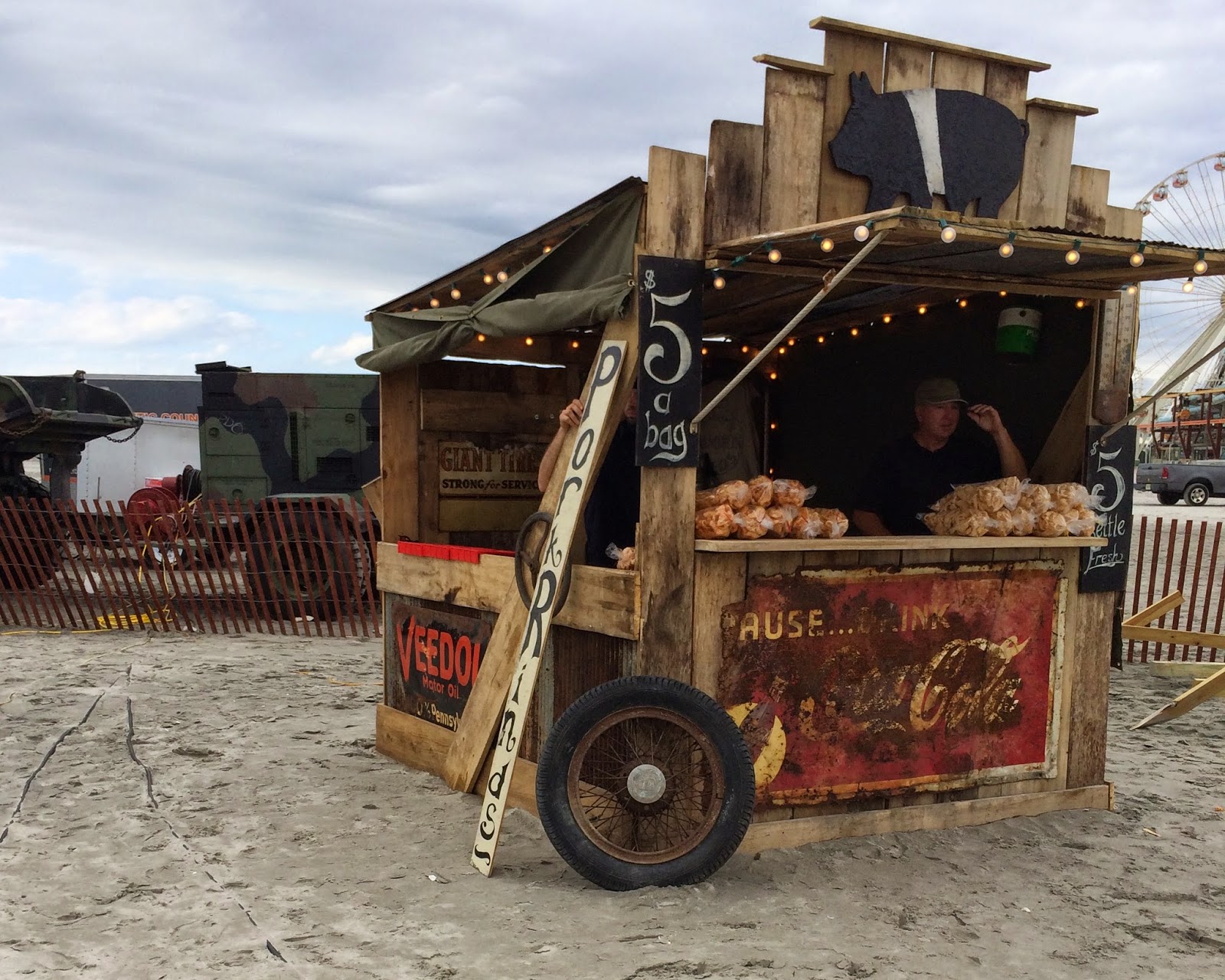 Food wise, well, it wasn't exactly a spread to send Alice Waters into orgasmic hosannas. Unless they were hiding the food booths at an undisclosed location, there seemed to be a choice of coffee, beer, potato chips, and pork rinds. There was special booth just for the artisanal free range heirloom pork rinds. Crazy. 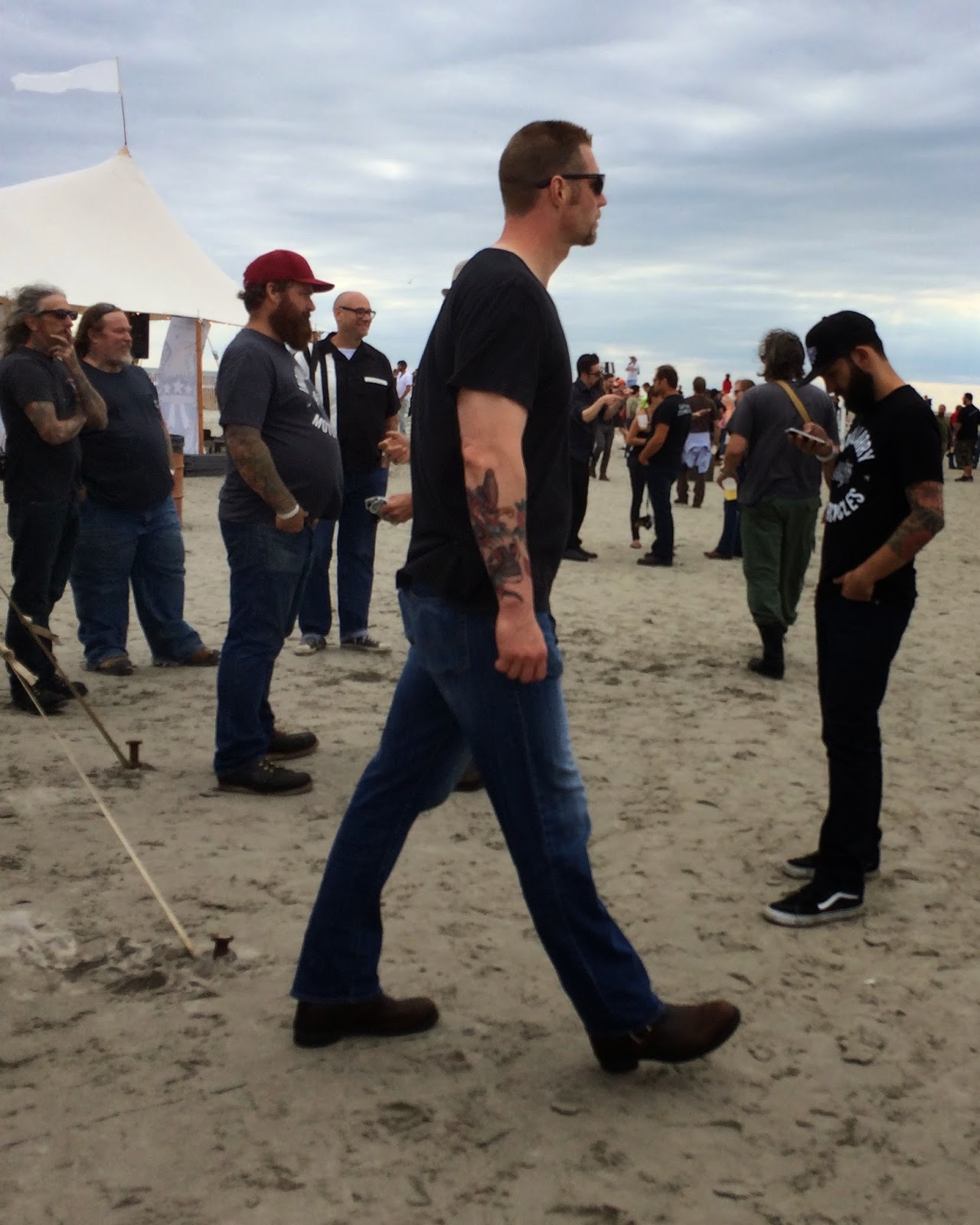 There was a very strong hipster vibe, in other words it was a pastel-free zone. In a fashion nod to Henry Ford’s remark about the color of cars, you could wear any color you wanted to as long as it were black. Skinny jeans and tats were the order of the day. 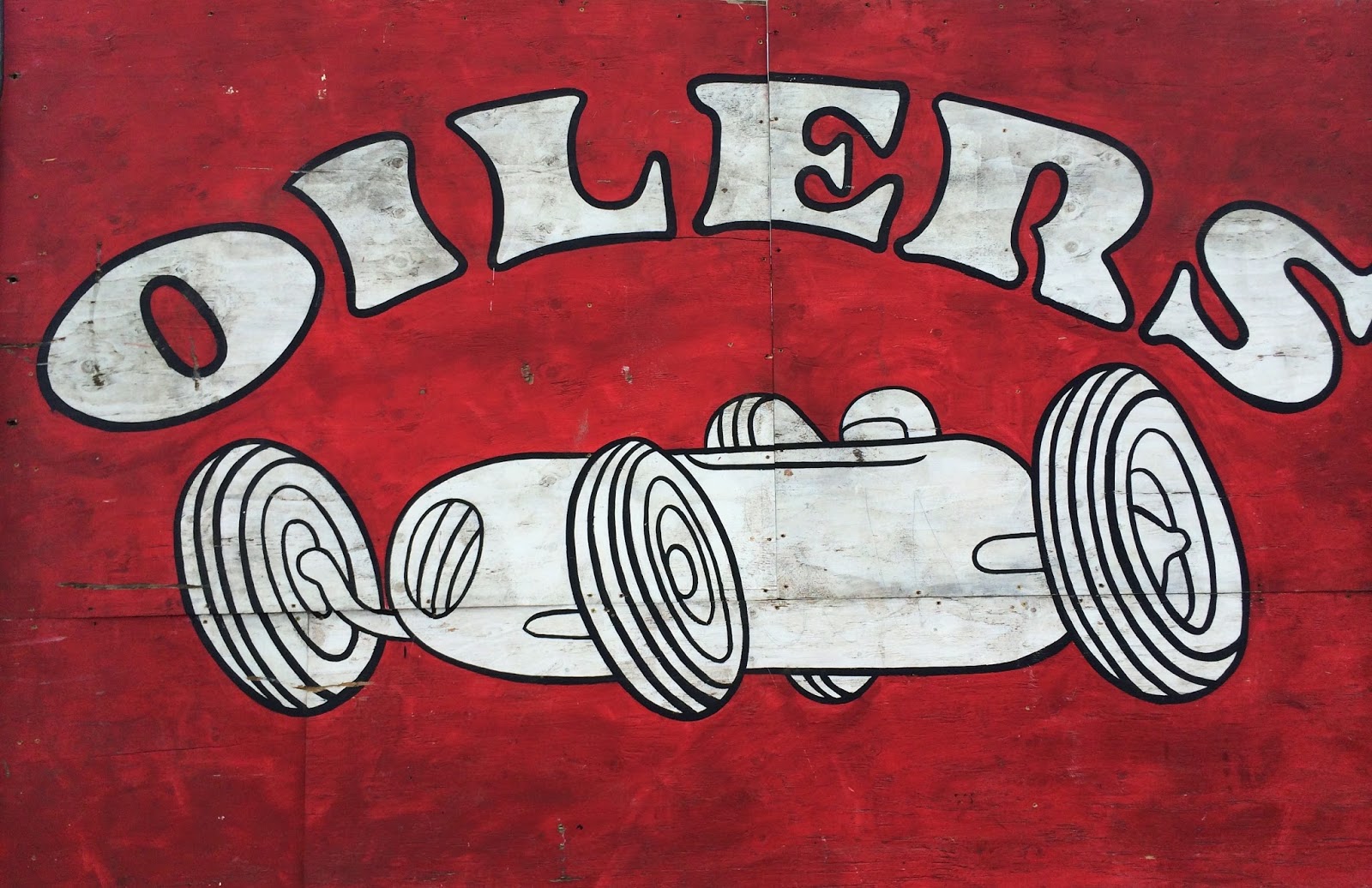 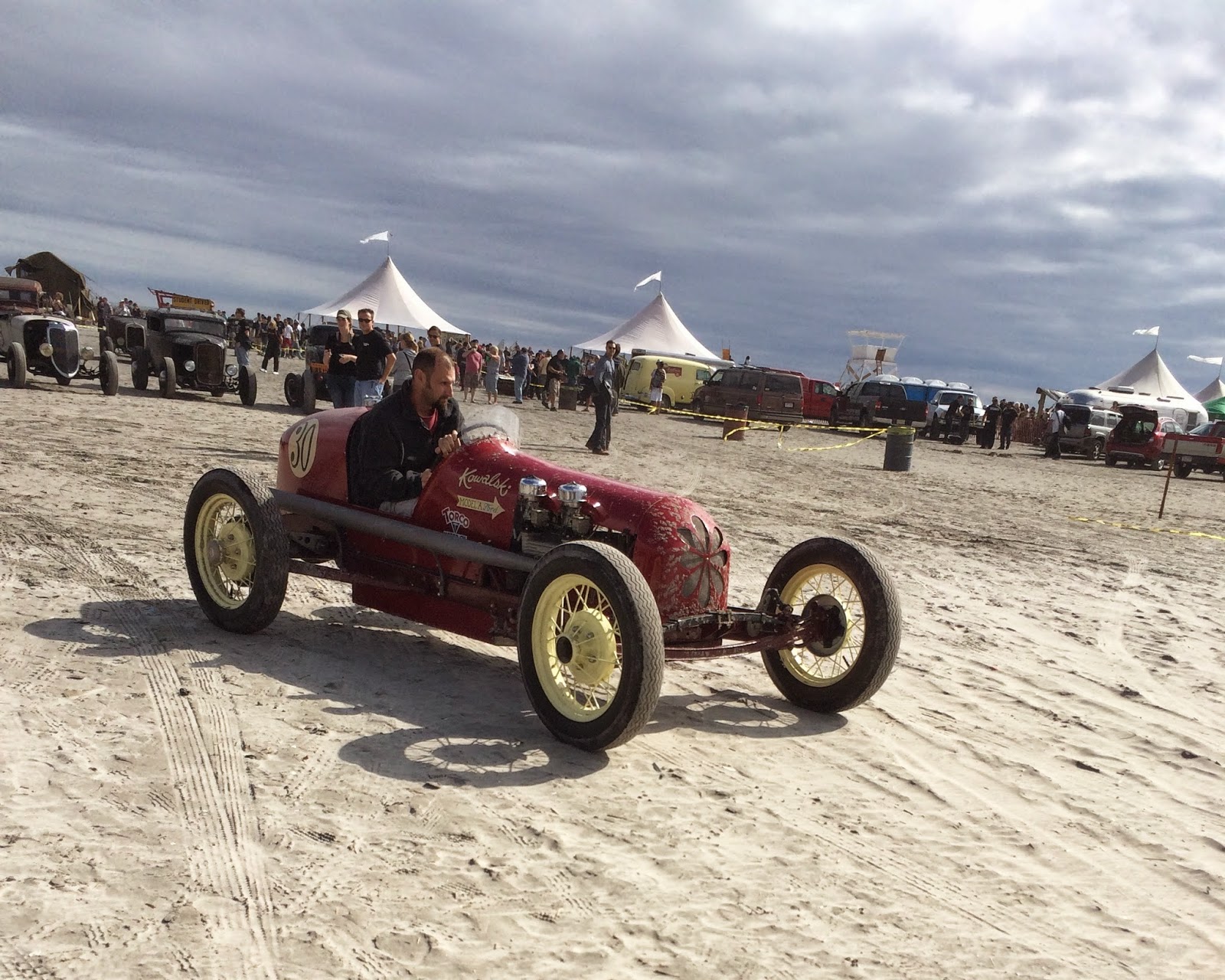 We missed the racing on the beach since the tide had come in. It looked as if the finish line, or perhaps that was the reviewing stand, were about to float away in several feet of water. We did however, see people do donuts and hear lots of engine revving by cars in various stages of tune up. 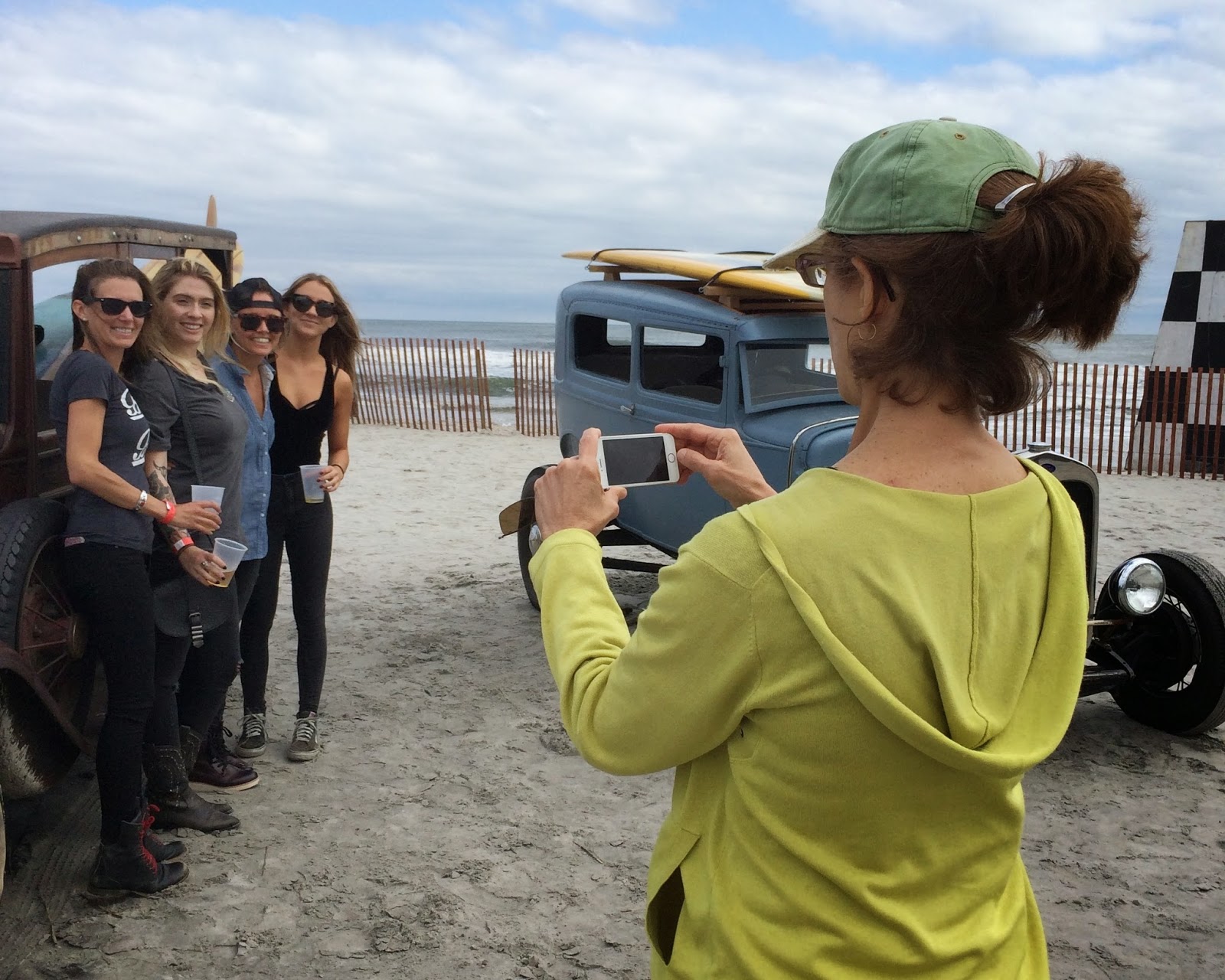 Four young women asked me to take their photo and so in lieu of listening to the unsolicited advice from one of my friends on how to do it, I handed her the camera so she could do the honors. I asked if they wanted to put their beer cups down for the photo but they were having none of that. Apparently their mothers know that they are not as pure as the driven 1930 Ford V-8.

Some guy doing security told us to come back at 8:00 for the bonfire. Perhaps they'd grabbed some wieners and were going to be roasting them--it didn't seem like a s'mores sort of crowd. In the end, the bonfire interfered with the obligatory visit to Fred's. That meant I never had to come clean to a tattooed hipster that I didn't know the difference between a banger and a flatty.

My friends and I said to ourselves that we’d come back at 7:00 am the next day--when the tide was out-- to see the racing. Big surprise: that didn't happen. But I think we all believed we would when we said it.

I hope the Race of Gentlemen returns to Wildwood next year and isn't just motor racing's version of Brigadoon,  fading into the ocean mists (and a cloud of exhaust smoke) off an improbable spot at the Jersey Shore.

And this great video on Vimeo-- Race of the Gentlemen
Posted by Rick Bryant at 7:26 AM