A Peck of Princesses

Sorry for the hiatus in posts. I was a bit distracted by work and my super amazing social life in the month of December. The good news is that I got some great books for Christmas. This, however, was not one of them. Am I the only one who thinks that Harlequin Books would sell more books if it emphasized "Large Manhood" rather than "Large Print"?

I’d just barely come up for air after First Night State College when I braved single digit temps to go the Farm Show Arena in Harrisburg for the Pennsylvania Preferred VIP Reception or something like that. I drove to the event in my sister’s GMC Terrain since my friends Double R and JD were with me. We would have been a bit snug in my Ford Ranger and not nearly as comfortable as we were in the GMC. As my hip and urban friends would say, that is if I had any hip and urban friends, that Terrain is a pretty sweet ride.

Pennsylvania Preferred  --actually, it's PA Preferred, part of the great dumbing down of America-- is the marketing program  of the Pennsylvania Department of Agriculture that promotes food that's grown or processed here in Pennsylvania. I've never been invited (that will be $35 please) to be a PA Preferred VIP before; I’m more of a Jersey Fresh (as in stuff that's grown in New Jersey, not portly Gov. Chris Christie on the first date) roadside stand kind of guy. Pennsylvania is my home state, but it’s hard to beat Jersey corn and tomatoes and the rest of south Jersey's fantastic produce, not to mention the top drawer medical waste that washes up on the beach. But I was eager to see what the Keystone State had to offer, hence piling in the car to head to the state capital.

Although the weather during the trip was like a warm-up act for this week’s Polar Vortex, in the car we had the choice of Ice Station Zebra or Bessemer furnace. Needless to say, I wasn’t exactly fluent in the heater controls. In the digital age, high-end car climate controls are not always intuitive for late model boomers like me. I didn’t really feel like downloading the seminar on how to work everything, let alone stopping at a GM dealer to see if Mr. Goodwrench matched the promise of his Grindr profile. So I fiddled with the heater as we drove. Sometimes I was hot. Sometimes I was cold, and other times I was hot and cold at the same time.

Except for the heater controls, the trip down was uneventful. Somehow I resisted temptation when we went by Clarks Ferry, sparing Double R and JD the story of stopping at the dirty book store there years ago to buy a SCREW magazine (RIP Al Goldstein) en route to New York City to see if live sex shows in Times Square really contained live sex. (I don't know about the rest of the theaters, but at The New Bryant Sextacular the answer was not just yes, but hell yes.) When we got to Harrisburg we parked at the Pennsylvania Department of Agriculture across the street from the arena and took a shuttle bus the rest of the way to the Farm Show Complex.

We weren’t even in the shuttle bus when some nebbish from the Port of Philadelphia glommed on to JD and was expounding on the many fine qualities of the Port of Philadelphia (Rated #1 by both Philadelphia and Camden mobs, biggest port for frozen Alpaca (“The Other South American White-ish Meat”) in the tri-state area, etc. etc.  I’d describe him as a barnacle, but barnacles don’t usually have comb-overs. His social skills were more than somewhat lacking—I could see him throwing snowballs at Santa at an Eagles game—and I wondered to myself how guys like that ever get laid? I think we lost him when he had to find a men’s room mirror to do a serious amount of highway work on his hair, though, frankly, even Stevie Wonder could see that he had a comb-over. 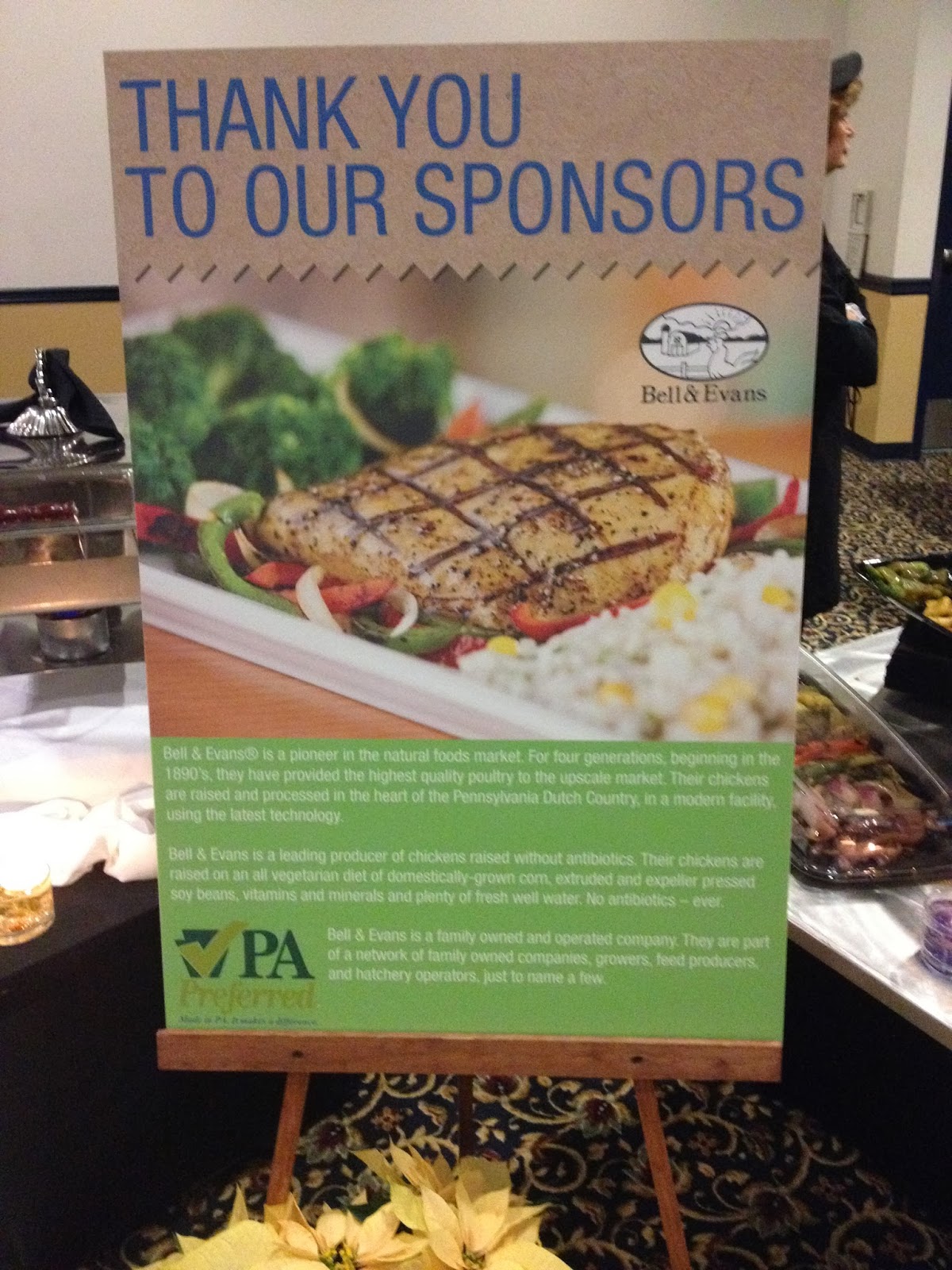 The farm show complex is cavernous and so once the shuttle bus dropped us off at main entrance (sponsored by Underwood Deviled Ham) we walked and walked and walked some more before we found the registration tables for our function. We gave the earnest young folks at the registration desks our names, but there were no wrist bands, tickets, or other proof of purchase to show for our efforts. Then again, who would walk through the bowels of the Farm Show Complex (sponsored by the North American Beef Jerky Institute and Metamucil) to crash the PA Preferred VIP Reception?

After passing the Future Farmers of America coat check, I skipped the Campfire Girls shoeshine stand in order to dash right into the reception.

There were plenty of people there, though it was hardly a crush of PA Preferred VIPs. I’d heard that most anything was suitable in the party dress department and saw everything from men in suits to jeans. The best outfits belonged to two presumably certified heterosexuals in extremely fetching camouflage blazers from the Duck Dynasty Collection by After 6. And no, it wasn't the cool urban hipster skinny jeans sort of camouflage, this was the kind that comes with a matching recliner, covered in Herculon.

Since the room wasn’t as crowded as it could have been, it meant finding my friends more easily. I was renewing old acquaintances and chatting some new people up a storm and when someone said, “Look at that woman over there in the gown, it’s Mrs. Pennsylvania!” 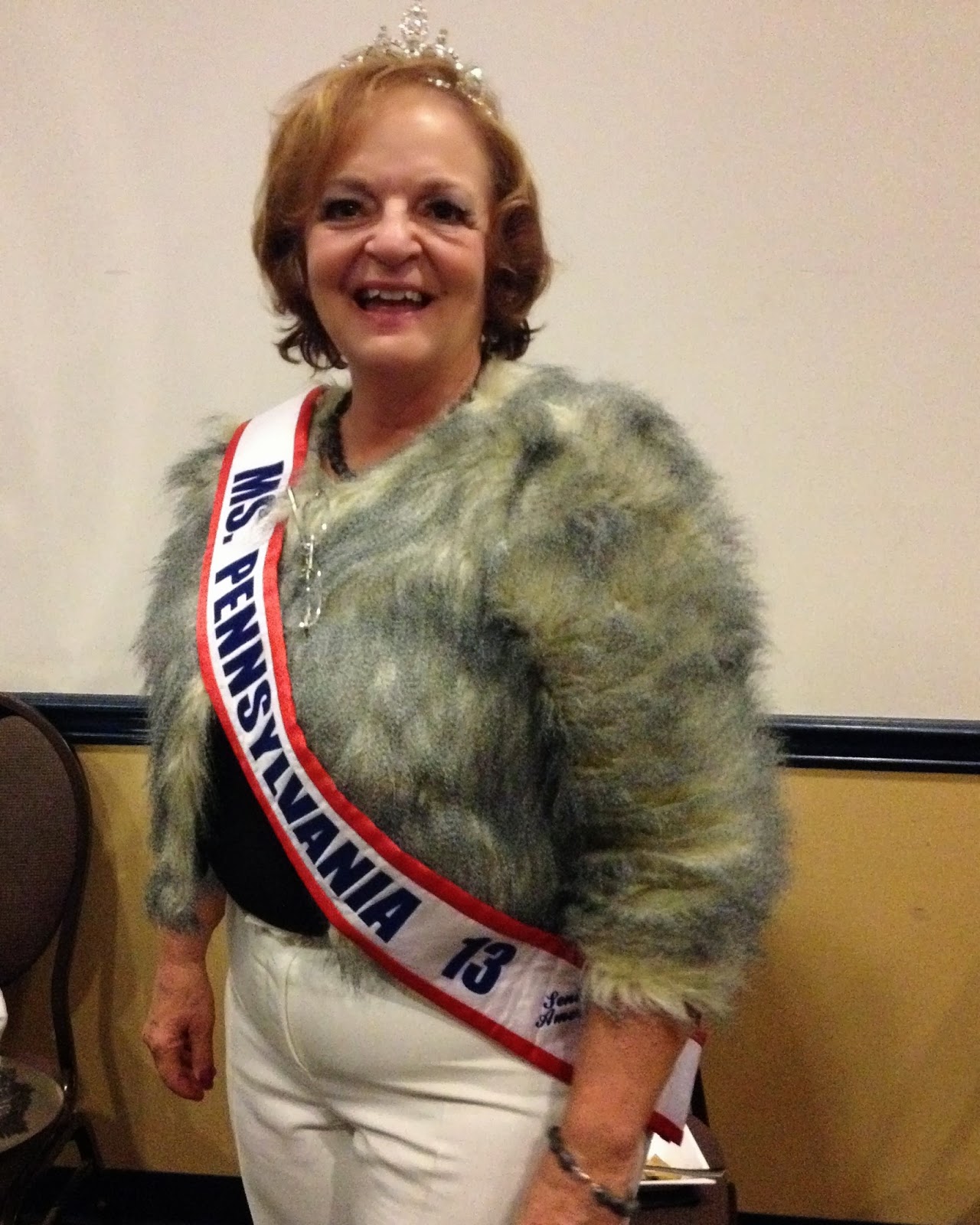 Sitting on the chairs at the edge of the room was a woman in what can best be described as a getup, decked out in a tiara and sash. She was smooching and making googly eyes at a man of a certain age plus twenty years. He was wearing a tuxedo.

In a flash my friend Patti joined Double R and me in going over to meet Ms. P.

Ms. Pennsylvania was nice, but I couldn’t help but think of her as a woman who’s had too much to drink and isn’t quite as attractive as she thinks she is. If I were going to be snarky, which I hardly ever am, I’d say she reminded me of the sort of person you meet at a semi-low end airport bar during an interminable flight delay. I don’t remember her name but I recall that she said she was a psychiatric nurse and said that this was her first pageant. Yikes. She looked as if she learned about makeup from Tammy Faye Bakker and maybe got some fashion tips from her too, since that sort of jacket thing, was, well, you just don’t see that every day. Trust me, that jacket had a label that said Merkin Donor or I’m not The Wandering Wahoo. Ms. Pennsylvania introduced her gentleman friend slash beau not as Mr. Pennsylvania but Mr. America. Then she gave him a look that said that he was going to get lucky tonight, or perhaps unlucky, depending on how you look at it.

Ms. Pennsylvania volunteered that she had an album out—“What genre?” I asked, thinking that she might have done a cabaret act. “Inspirational” she replied, something I should have seen coming.

No sooner had I snapped some photos of Ms. P than there was an announcement over the public address system that all the queens should come have their photos taken with the governor. No, I’m not making that up. Seriously. The public address announcer really said that. Of course, much chuckling ensued. 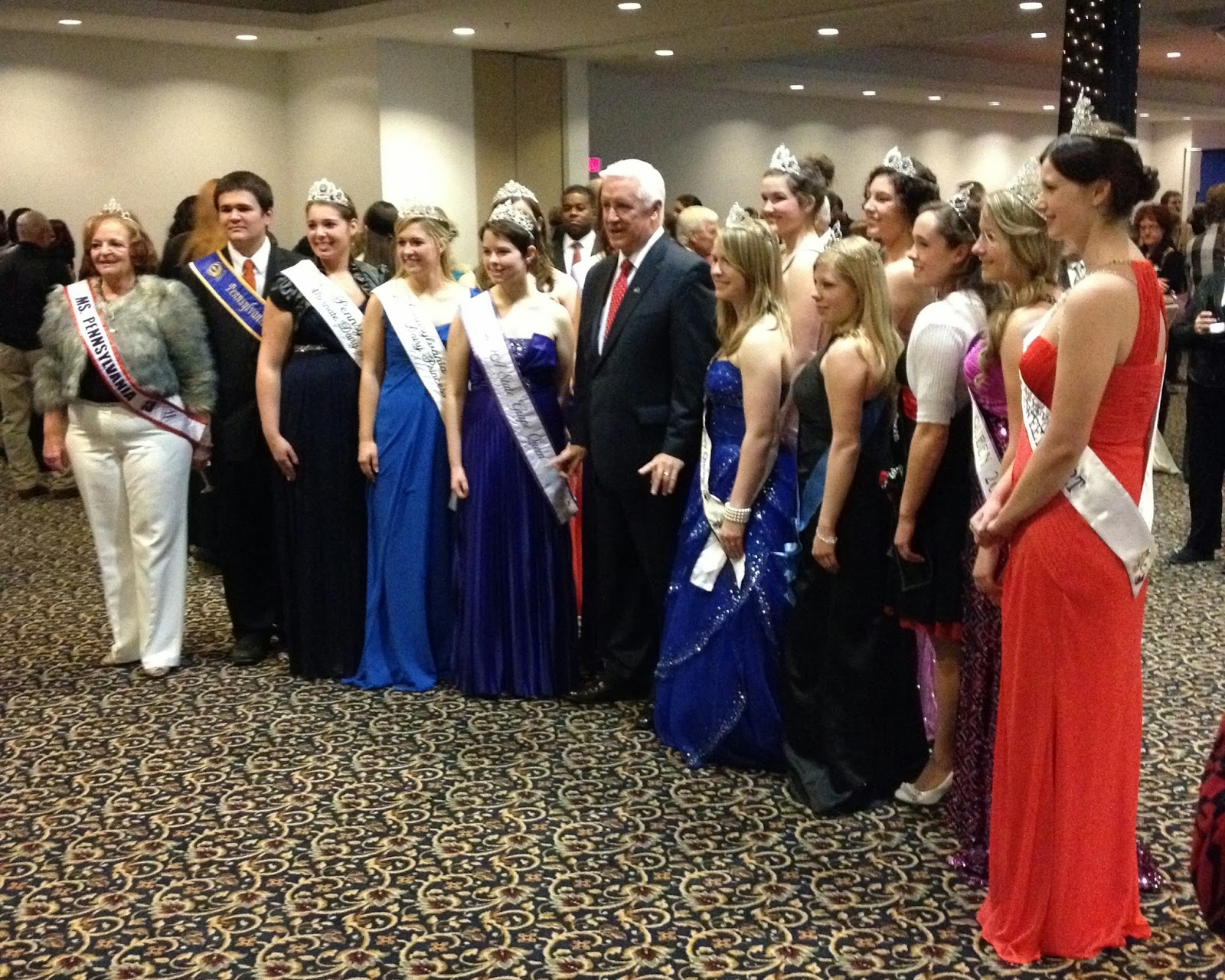 So there was Pennsylvania Governor Tom Corbett, looking as usual, as if he was about two minutes from wading into a fight at an Irish sports bar, surrounded by a bevy of young lovelies who represented many different aspects of Pennsylvania agriculture. Even Ms. Pennsylvania got in on the action. The people at the reception acted as if this sort of thing happened every day. It was one of the craziest things I’d seen in a long while.

So even though I’m a wallflower at parties, I decided right then and there to meet all the young royals who represented Pennsylvania agriculture. If the photos are a tad fuzzy, it's probably because I had Pennsylvania free-range artisanal Schuylkill County sourced gravy on the camera lens, an issue compounded by laughing when I took the photos.

Had I been a journalist I’d have had a notepad to write their names and stories down, but I’m not a journalist, and I don’t even play one on TV. I didn’t need a notepad to remember that the kids were unfailingly polite and especially good humored even though they’d nodoubt heard my probably slightly patronizing questions about a million times. (That goes for the few nearby parental units—it would be hard to run into nicer people at a party.) The kids had to work hard to get where they were, since each queen/princess/infanta/etc was a font of knowledge about his or her industry and its place in Pennsylvania’s economy and culture.

A couple even had just a touch of a jaundiced eye about what they were doing and seemed to recognize the craziness of being the Junior Rutabaga Princess. Twenty-five years from now, they’re going to come out to their kids that they used to be the Pennsylvania Guinea Fowl Duchess and their kids are going to laugh for days, if not the rest of their lives. And some of them, as in the Honey Queen, who attends West Chester University and knew the joke about going in High and coming out Gay, were actually quite amusing. She'll be a success at whatever hive she calls home.

The crazy part to me—and yes, I know more about my close personal friend Queen Elizabeth II than most people—is who thinks it’s a good idea to borrow the trappings of the beauty queen circuit in order to promote agriculture? The gowns, some of which were even attractive, came from thrift stores (yes, I asked), and no one in their right mind thinks that the tiaras are made from actual diamonds. So as costumes go, they really aren’t believable in the slightest. Isn’t there a better way?

After running into my Congressman (no, he was not in a thrifted gown and rhinestone tiara) in the Pennsylvania Trout Taco line and not having the presence of mind to ask him if he could get me a date with the so far non-gay Rep. Aaron Schock (R-Illinois) and eating my fill of Pennsylvania pork and other snacks, it was time to venture out into the single digits for the trip back to Happy Valley. Mr. Port of Philadelphia had apparently got lucky with Miss E-Z Pass, for he and his comb-over were nowhere to be seen. Perhaps I could figure out how to work the temperature controls in the car for the ride home. If I’d only run into Miss GMC Terrain in her tiara and gown, I’m sure she could have told me.
Posted by Rick Bryant at 1:42 PM